In its 12 years of existence, Baltimore’s Office of Inspector General (OIG) has seen four inspector generals come and go, plus two long stretches of interim directors. A seventh IG is expected to arrive in 2018.

The common denominator of this turnover, which has rendered the OIG ineffective if not “wasteful” in the words of its former chief, is this:

The person responsible for rooting out “fraud, waste or abuse of office” in city government is hired – and can just as easily be fired – by the person who runs city government.

The executive order that established the watchdog agency makes the IG an “at will” employee who can be removed without cause by the mayor.

This lack of independence makes the IG a patronage appointee who must toe the line – or else face the consequences of the last inspector general, Robert Pearre, who says he was forced to resign after he refused to end an inquiry into charges of sexual harassment and misuse of funds by a top-level official.

A movement is now afoot to make Baltimore’s OIG free from political interference.

The first step was the publication last month of an Abell Foundation report on ways to improve the office. Significantly, the report was written by Pearre and George Nilson, the former city solicitor who says he was fired partly because he refused to remove Pearre at the request of then-Mayor Stephanie Rawlings-Blake.

(Nilson had argued that only he, as city solicitor, had the power to dismiss the IG, an argument that evaporated after he was told to leave.)

The second step is the planned introduction of a resolution by Councilman Ryan Dorsey to put a charter amendment on the November 2018 ballot placing the OIG under the supervision of a blue-ribbon panel of legal experts and citizens. 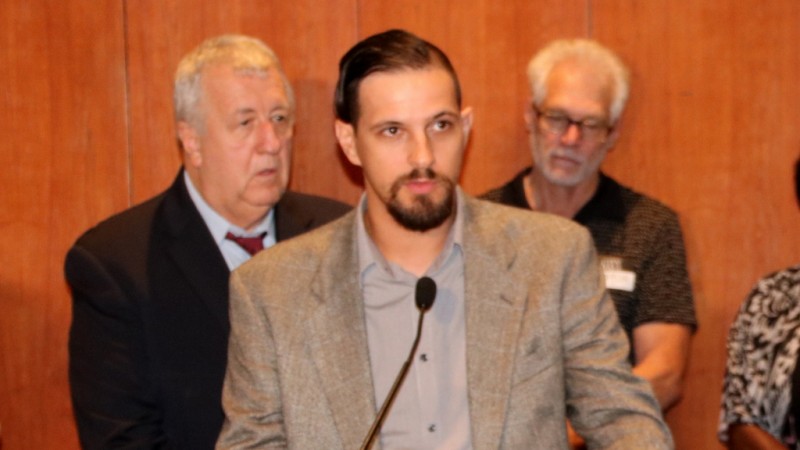 Councilman Ryan Dorsey says he will introduce a resolution to put the OIG question on November’s ballot. (Fern Shen)

Such reforms aren’t likely to happen without a fight.

Mayor Catherine Pugh signaled yesterday that she has little interest in changing the structure of the OIG.

The city solicitor in question is Andre Davis, a retired federal court judge who came to City Hall in September. In a separate exchange with The Brew, Davis said he had seen the Abell report and was aware that several Council members “have expressed an interest in exploring its recommendations.”

Asked about the inactivity of the OIG since Pearre left, Davis said, “The search for a new IG is reaching its conclusion and we hope to make an announcement early next year.”

He added, “I am sure the new IG will take a close look at the organization and operation of the office.”

“What is this?” Mayor Pugh asked when questioned about the recommendations of the Abell report.

The Abell report notes that inspector generals have served as watchdogs in federal agencies since the late 1970s, when the Inspector General Act was passed by Congress, and that the concept of an office conducting independent audits and investigations is the cornerstone of more than 100 OIGs set up by states and cities.

According to the report, the effectiveness of Baltimore’s OIG was compromised at the start by the way the agency was set up by then-Mayor Martin O’Malley.

Rather than follow the standards developed by the “Green Book” of the Association of Inspectors General, O’Malley constructed an OIG with a sweeping mandate – “to record and consider all complaints of fraud, waste or abuse of office” involving “any municipal officer” and “any individual, organization or business receiving City-granted funds” – but without the necessary tools.

• cannot suspend or cancel a contract awarded by the Board of Estimates that is found to be non-performing or based on false statements.

These and related weaknesses – such as no long-term funding and no stated provisions for the appointment and removal of the inspector general – have negatively impacted the office and led to an extreme turnover in agents and administrators, according to the Abell report.

“It is time for Baltimore to take a step back and fix the underlying structure of its OIG before proceeding,” the report says, calling for an ordinance to replace O’Malley’s executive order and new provisions to give the office subpoena and audit powers.

Councilman Dorsey says he wants to make these and other OIG reforms permanent through a charter amendment.

“With all of the talk about audits and transparency during the 2016 election cycle, I began to think about what other accountability mechanisms can be put in place that aren’t just talk,” Dorsey said.

His resolution would face a stiff test – requiring either Mayor Pugh’s signature or a veto-proof majority of the Council.

Pugh would not comment yesterday on whether she would back such a bill. Bernard C. “Jack” Young, who has great discretion over bills as president of the City Council, has not responded to several requests for comment.

Dorsey said that if his resolution is bottled up in the Council, he will work with labor unions and other groups to gather the 10,000 verified signatures needed to place a charter question on the November ballot.

“If we are to continue with an OIG, and I think voters will agree it is needed, there is no excuse for not setting it up for as much success as possible,” the 3rd district councilman said.

Further noting that “these proposals aren’t unusual when you look at how inspector general offices are set up elsewhere,” Dorsey added ruefully, “Baltimore, of course, isn’t elsewhere.”

NOTE: The Brew receives funding from the Abell Foundation.