Following a year of declarations by Mayor Catherine Pugh that historically underfunded black communities should receive more investment from the state, guess who’s getting the largest chunk of Baltimore Regional Neighborhood Initiative (BRNI) money this year?

With today’s approval of a resolution of support by the mayor and the Board of Estimates, the Maryland Department of Housing and Community Development will release another $800,000 of BRNI funds for the Marriott Residence Inn, a hotel that caters to patients and their families at the Johns Hopkins Medical Center.

This money will supplement the $600,000 the project was already awarded under the same program.

The Baltimore Regional Neighborhood Initiative was established by the legislature to provide strategic investments that lead to “healthy, sustainable communities” in Baltimore City and inner-Beltway communities.

But this year, $1.4 million of the under $10 million allotted to Baltimore will go to a single project – paying for improvements to retail and restaurant space at the Marriott.

The money will be administered through East Baltimore Development Inc. (EBDI), a quasi-public entity that was set up to establish a biotech park north of the Hopkins Medical Complex.

Over the years, the biopark project has knocked down blocks of old housing and removed more than 700 African-American families. Much of the district is still empty, although new townhouse construction has recently picked up.

The Marriott is considered an important component for Hopkins and a way to lure upper-income visitors and potential residents to the area. Opened last October, the sleek 15-story building features 194 suites and studios, plus 20,000 square feet of retail space.

EBDI plans to use the neighborhood funds to offset the costs of “tenant improvements that are required by the owner to lease retail space in the hotel,” said Sara Luell, spokesperson for the Maryland Department of Housing and Community Development. 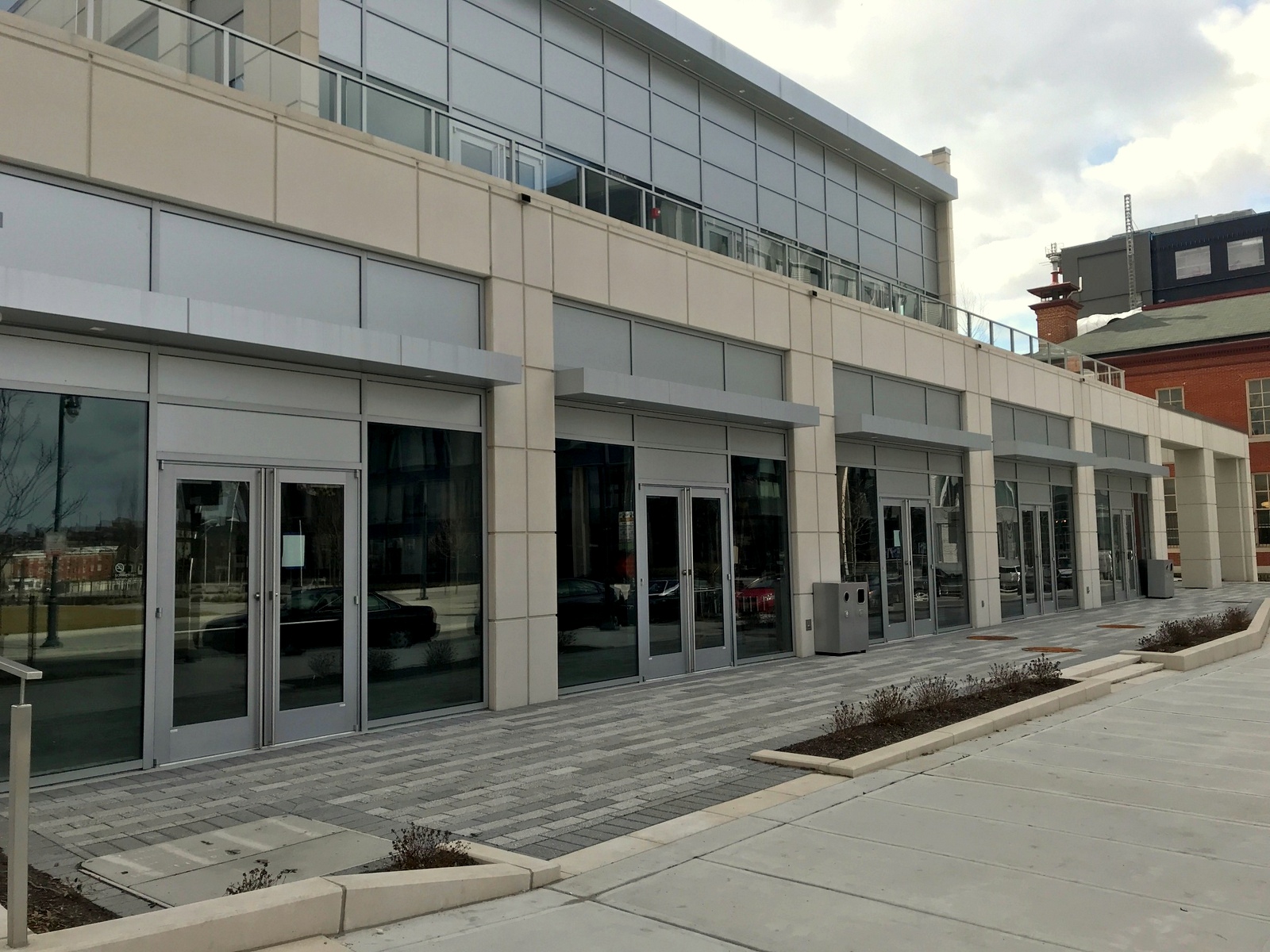 Neighborhood funds will be used to outfit these vacant stores and other commercial space at the Marriott complex at Hopkins. (Mark Reutter)

EBDI president Raymond A. Skinner did not return email and phone requests for details about why the project now needs the extra $800,000 approved today by the Board of Estimates.

Skinner was secretary of DHCD when Martin O’Malley was governor. He retired from state government shortly before Hogan became governor and was snapped up by the nonprofit to manage the 88-acre redevelopment zone.

In deciding to take the EBDI job rather than enjoy retirement, Skinner told The Baltimore Sun, “It’s an opportunity for me to use my experience and skills and contacts and political acumen to really further the goals and objectives of developing this community here in Baltimore.” 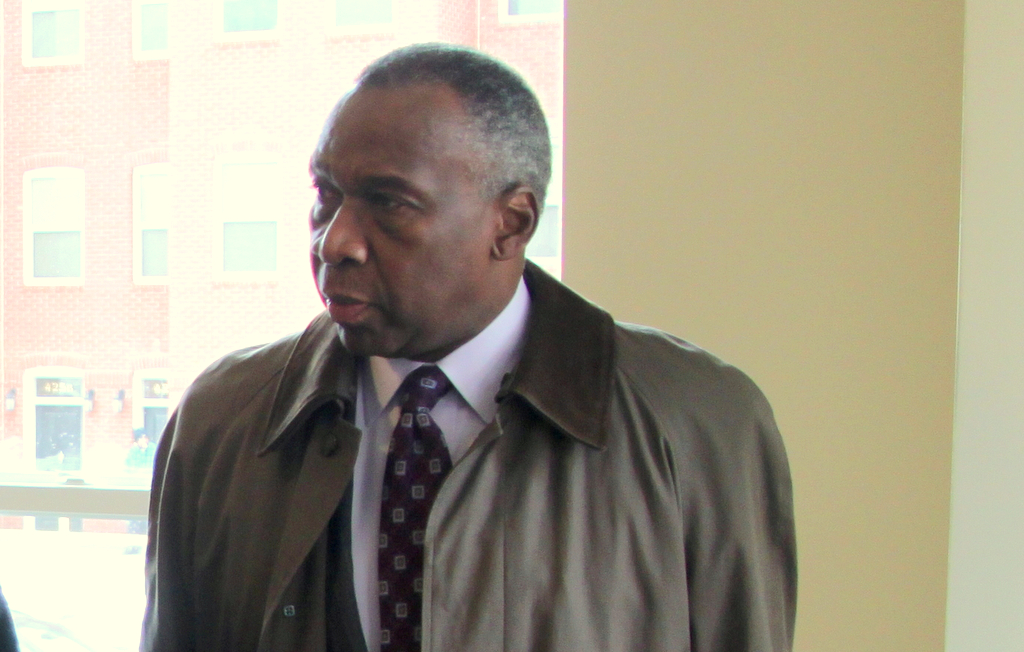 Raymond Skinner tours Baltimore public housing while secretary of the Maryland Department of Housing and Community Development in 2014. (Fern Shen)

The hotel’s principal owner, Greenebaum Enterprises, is best known for Maple Lawn, a 600-acre planned community in Howard County, and the Woodholme Center in Pikesville.

Members of the firm are avid supporters of Gov. Larry Hogan, whose housing department dispersed the grants.

In September and October, company founder Stewart J. Greenebaum (who died last month at 81) and president Michael I. Greenebaum donated $10,000 to Hogan in preparation for his re-election campaign. Greenebaum Enterprises chipped in another $4,000.

(To hedge its bets, the company also contributed $5,000 to Baltimore County Executive Kevin Kamenetz, who is seeking to win the Democratic Party primary and run against Hogan in the general election. The family’s generosity also extended to Baltimore’s ex-mayor, Stephanie Rawlings-Blake.)

Adding to the political intrigue, a minority investor in the Marriott hotel is Ronald Lipscomb, the one-time boyfriend of another former Baltimore mayor, Sheila Dixon.

In 2009, Lipscomb pleaded guilty to violating campaign finance laws by paying for a poll for City Councilwoman Helen L. Holton in exchange for her help in securing tax credits for an Inner Harbor East project he had invested in with the Paterakis family.

Through the Baltimore Public Markets Corp., Caves Valley will pick up $250,000 to help underwrite its rebuild of the Cross Street Market.

Another prominent developer, Caves Valley Partners, is on the receiving end of state neighborhoods money. Through the Baltimore Public Markets Corp., CVP will pick up $250,000 to help underwrite its rebuild of the Cross Street Market.

CVP partner and principal, Steven Sibel, is the finance chairman of Mayor Pugh’s campaign committee. He recently co-hosted an exclusive fundraiser for the mayor at the Caves Valley Golf Club in Baltimore County.

In addition to more and larger allocations to private real estate developers, the neighborhood grants program has made a noticeable shift toward artist and theater workshops.

Through the sponsorship of software developer Christopher Ashworth and BARCO (Baltimore Arts Realty Corp.), $200,000 in grants will be used to convert the long-vacant Playhouse Theater on 25th Street to an R&D center for audio, video and lighting technology as well as for theater performances.

Another $200,000 is going to The Compound, an artist and urban farming complex owned by Nicholas Wisniewski. Still another art group, the Oliver Street Studios, has been awarded $200,000 for facility upgrades.

Ellen Janes, CEO of Central Baltimore Partnership, the non-profit awardee of the grants, said BARCO in particular “has organized remarkable technical assistance, nearly all pro bono,” to assist the owners of the buildings.

“Our goal is to improve the safety and functionality of these artists’ spaces while keeping them affordable,” she added. “We’re also hoping to improve the public’s benefit by allowing for additional programming once the spaces are made safe as gathering spaces.”

In addition to private developers, one of the biggest winners in this year’s round of awards are tech workshops and theater and art spaces.

Other allocations this year will help the Cal Ripkin Sr. Foundation establish a ball field ($250,000) and provide seed money for a cooking school set up by Humanim ($50,000). 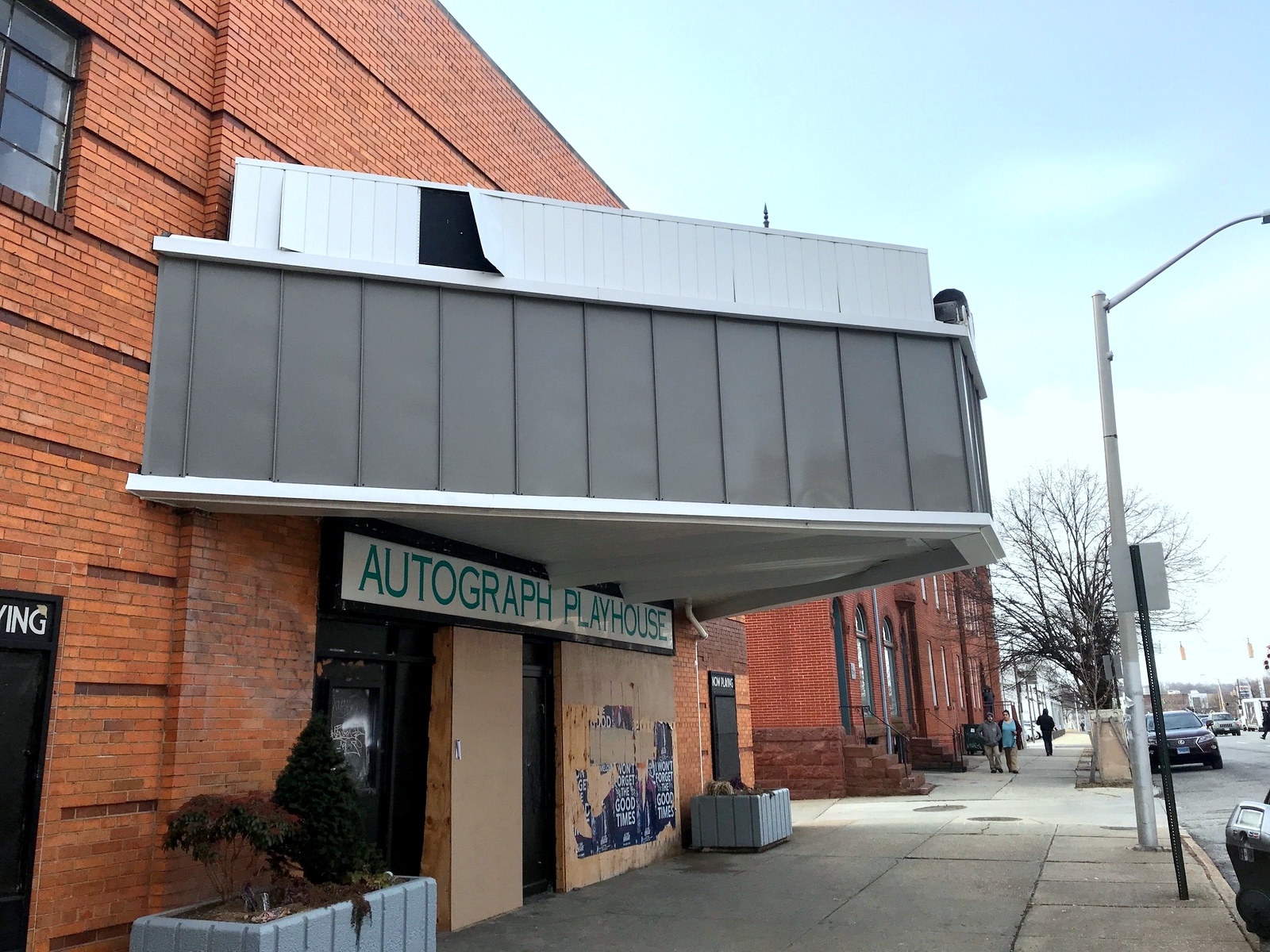 The Playhouse Theater on 25th Street is to be converted with the help of neighborhood funds into a center for the theater arts. The project was handed $200,000 by today’s Board of Estimates action. (Mark Reutter)

A review of the BRNI awards shows that different neighborhoods receive widely divergent grant totals. This is partly a reflection of the absence of  non-profit development groups in poor communities, who serve as the sponsors and “awardees” of the state money.

As a consequence, many of most disenfranchised neighborhoods that Mayor Pugh says she wants to help never apply for grant monies.

For example, Sandtown-Winchester, Penn North, Harlem Park and Mondawmin – all areas impacted by the 2015 disturbances following the in-custody death of Freddy Gray – did not get any BRNI funds this year.

Nor did communities along historic thoroughfares with troubled commercial properties and vacant housing.

Two politically wired West Side groups did get awards – $150,000 to Bethel AME Church for a community empowerment and wellness center and $400,000 to the Druid Heights Community Development Corp. for the Bakers View housing project.

(Members of the Bethel congregation include Comptroller Joan Pratt, who sits on the Board of Estimates, and former Mayor Dixon.)

Healthy Neighborhoods Inc. was given $750,000 for a homeowner program in Reservoir Hill.

Elsewhere in the city, the Southeast Community Development Corp. got $740,000 and the Southwest Partnership $395,000.

The former will use a portion of the grant for improvements to Patterson Park, while the latter will concentrate on historic facade upgrades around Hollins Market and to offset some organizational costs 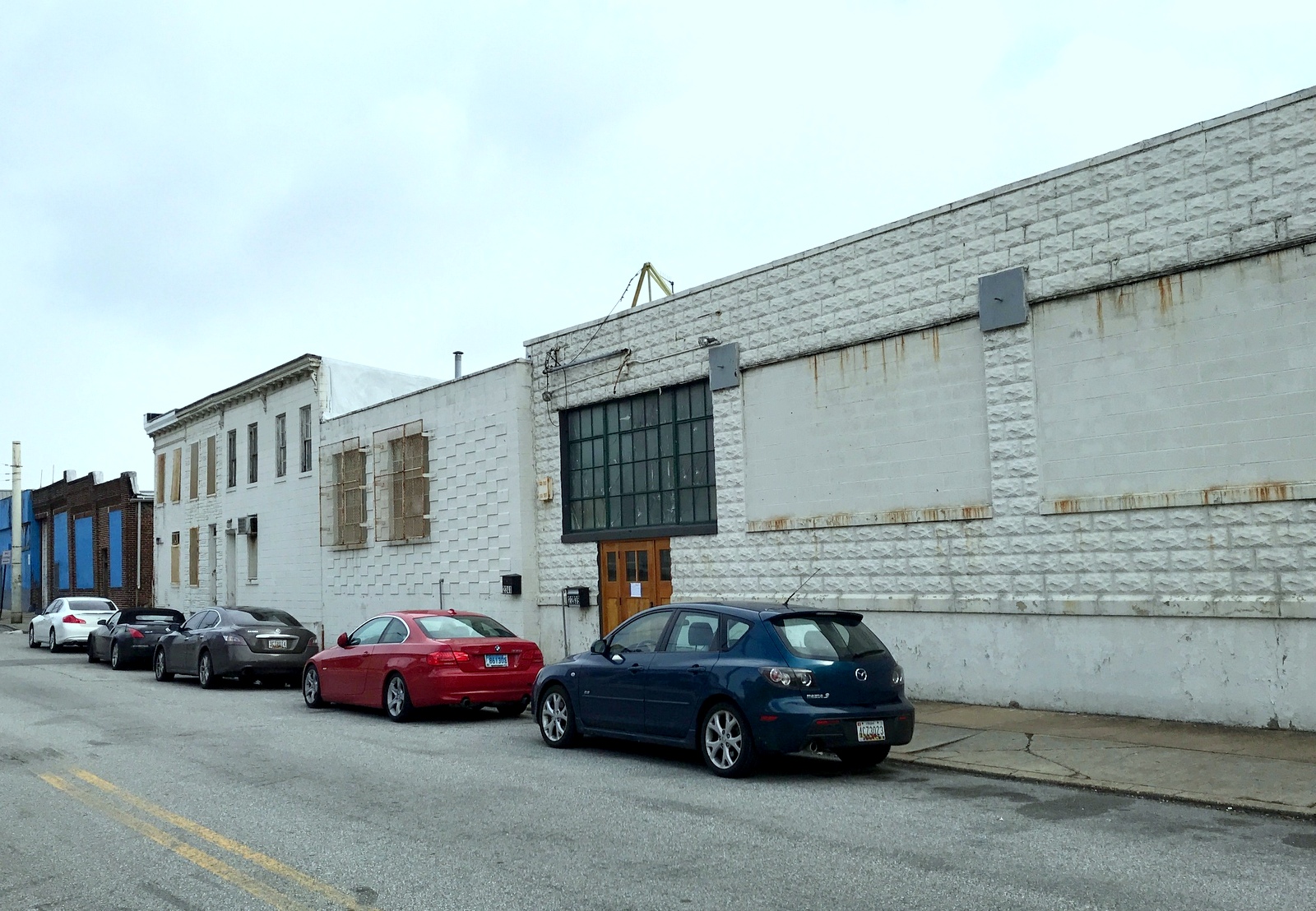 BRNI money is destined for The Compound, a former forklift factory on Kirk Avenue, to bring the building’s artist workshops and maker space up to code with new sprinkler and electrical systems. (Mark Reutter)

Greater Baybrook Alliance, a joint venture of South Baltimore and Anne Arundel County organizations, say they will use $350,000 to rehab a community center and $250,000 to light up an athletic complex at Farring Baybrook Park. The park serves Brooklyn and Curtis Bay in the city and Brooklyn Park in Anne Arundel.

Baltimore County will use its small pool of “inner-Beltway” grants to concentrate on Dundalk.

Some $500,000 in homeownerhip programs will be administered by the Dundalk Renaissance Corp. Another $100,000 is slated for commercial property spruce-ups.

NOTE: An earlier version of this story double-counted three BRNI awards. After conferring with DHCD, we found that the awards had been transferred from one sub-program to another, which led the initial double count, which has been fixed.