Lieutenant Theodore Friel Jr., from the Human Resources Department, was on the stand this week to confirm a few facts. Yes, he said, Detective Marcus Taylor joined the Baltimore Police on May 18, 2009. And, yes, Daniel Hersl came on September 7, 1999.

Testifying for the prosecution in the federal racketeering trial against Hersl and Taylor, Friel’s job was done in about three minutes. But then the defense cross-examined him:

You worked with Hersl in the Eastern District, right?

Friel acknowledged he had.

“A gun day was a day that was given to an officer” after seizing a gun, Friel said.

A day given. As in overtime pay, but no overtime work.

His Gun Trace Task Force (GTTF) colleagues put up similarly impressive overtime numbers. And they weren’t the only Baltimore police officers racking up the time-and-a-half.

Police overtime spending, currently at about $1 million a week, has been controversial for years. The Brew has often written about it (here and here).

An audit announced last March by Mayor Catherine Pugh is still – 11 months later – ongoing. The police command is now saying they will install fingerprint scanners to make sure cops properly clock in and out of their shifts.

Gangsters with a Badge

But this is a trial about what two particular cops did, and the prosecutor drove home the dirty facts about their particular crimes: burglaries, evidence tampering, wire fraud, armed robbery.

A pattern of crimes amounting to racketeering. Gangsterism with a badge.

The defense sought to contextualize these dirty facts. For citizens wondering just how corrupt their police force is, that contextualizing testimony was eye-opening.

It was striking to see how “gun days” – essentially, theft from taxpayers – were so well-known that Lt. Friel described them as if he were reading from page 23 of the HR handbook. 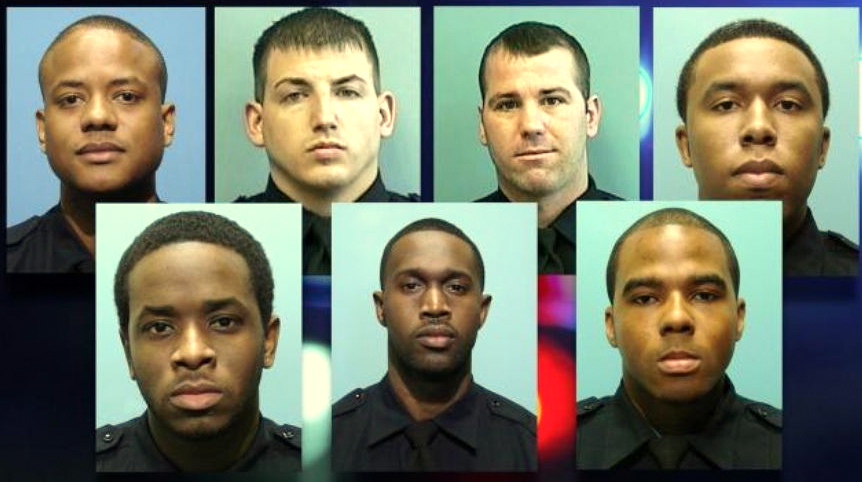 Attracting national and international attention, the testimony elicited by both sides in the trial is painting a damning picture of not just the two officers on trial and their confederates but the entire Baltimore Police Department.

It’s one thing to swipe a bit of overtime in reward for getting guns off the streets; quite another to burglarize drug dealers’ homes, falsify evidence, commit armed robberies.

Trapped in a Sick System

That corruption continuum is important to Hersl and Taylor, the two members of the once-elite Task Force who have not yet pleaded guilty.

By showing their clients did not participate (at least not willingly) in the unit’s worst crimes, and establishing that at least some of the activities their clients engaged in were widespread, the defense wants to persuade the jury that these two cops were victims of bad circumstance, trapped in a sick system with nowhere to turn.

But whether the strategy works or not, the trial has opened a window on routine Baltimore police practices that shade quickly into criminality – and raise questions about how the department has been managed for years or even decades.

If Baltimore’s police culture is as deranged as the defense portrays it, what does that mean for the city? 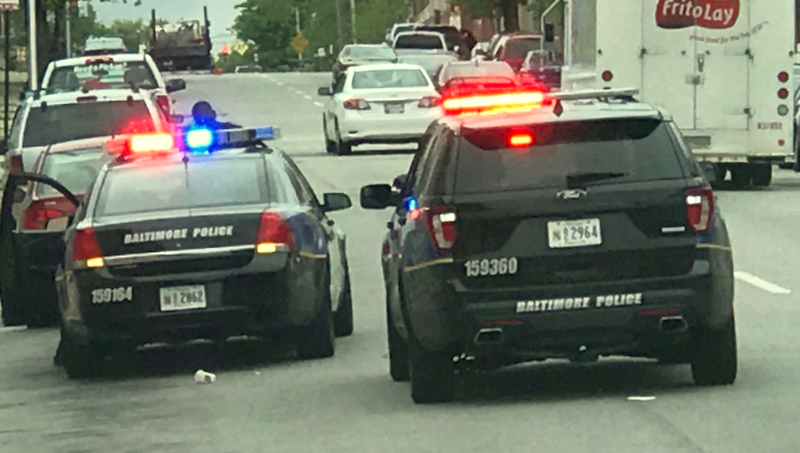 Not Approved, but Widespread

The jury got the message.

But was it widespread?

What if a police commissioner approved the overtime. Would that make it an approved practice?

The prosecuting attorney then asked if “claiming overtime for an arrest where you weren’t present” was common among officers.

Jemell L. Rayam, another member of the GTTF who pleaded guilty and is looking at a 20-year stretch, testified that the police crime spree dates back to 2009, at least.

That was the year when Rayam was caught stealing from a drug dealer and lied about knowing the other cop who took the money. The other cop, Michael Sylvester, was allowed to resign from the force in lieu of criminal charges. Rayam was cleared.

This and similar incidents revealed, again, rot in a department that activists, some defense attorneys and even some police officers have decried, not to speak of the demonstrators who roamed West Baltimore streets in the wake of the police-in-custody death of Freddie Gray in 2015. 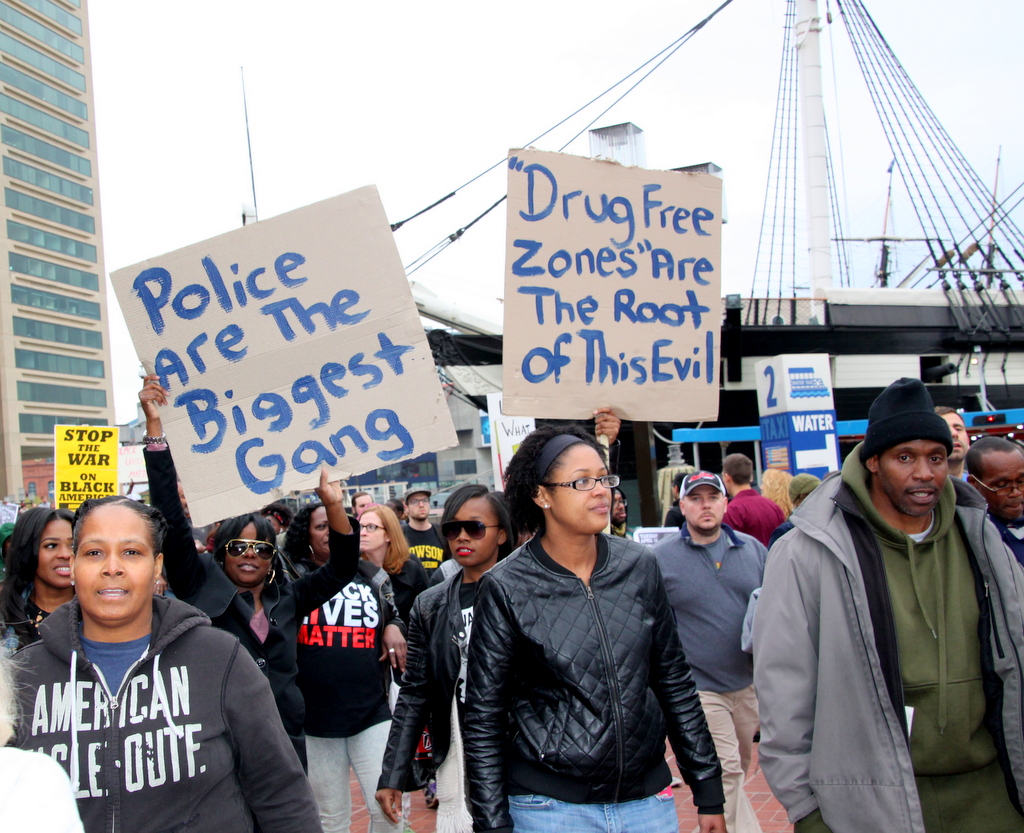 It’s a system in which responsibility is so diffused and the pressure to “produce” – i.e., arrest “bad guys with guns” – is so ingrained that small shortcuts inevitably become normalized, leading to bigger shortcuts until the whole culture of the agency is compromised.

“For those eight cops to pull off what they were doing, they kept it tight,” recently fired Commissioner Kevin Davis told The Sun in an interview last summer, adding:

“Should someone have known about it? Absolutely they should have known. The culture here contributes to it.”

A Rat for a Whistleblower

Seven years ago, Detective Joe Crystal ran face-first into that culture when he told Internal Affairs that a colleague had beat up a drug dealer who had the misfortune of trying to hide out in the cop’s girlfriend’s house during a chase.

The suspect was in the wagon when the cop, off duty, pulled up. The on-duty cops – then assigned to the Violent Crimes Impact Section, which preceded the GTTF – obligingly pulled the man from the van so the aggrieved officer could break his ankle, then covered-up the beating by falsifying their reports.

Crystal agonized over telling. When he did, he was hounded from the department, a dead rat placed under the windshield wiper of his personal car.

He went to the union for help, but the union was busy defending the sergeant who had arranged the beating. Crystal says then-Fraternal Order of Police President Bob Cherry told him that the violent crimes section’s MO was “blood in, blood out.” He better find a job with another police agency, Crystal was advised.

A detective who told Internal Affairs that a colleague beat up a drug dealer found a dead rat under the windshield wiper of his car.

“It was crushing,” he said. “They’re throwing gang terminology around, and the union is more interested in protecting a guy that did a wrong.”

Internal Affairs dragged its feet on his case. Crystal eventually sued and settled for a $42,000 payout.

The broader culture was laid bare again in the so-called “Freddie Gray” trials, wherein the lawyers for six police officers charged in Gray’s death successfully argued that none of them had responsibility to strap Gray into the police van, despite a recently disseminated general order requiring it, because, basically, general orders are suggestions.

Tony Barksdale, who led Violent Crimes Impact Section and took credit for reducing crime in Baltimore, said he’s heartbroken about what the federal case has revealed.

“I would never have thought this sergeant was a gang leader basically,” Barksdale said. “And even if he wanted to do this stuff, where was the one above him? They weren’t together when I was there. But I’m kicking myself: Tony how did you miss these motherfucking guys?”

Barksdale, who briefly became acting commissioner after Frederick Bealefeld quit, went on medical leave in 2012 and retired in December 2013.

As the homicide rate surged after the Freddie Gray protests and riots, Barksdale became a vocal critic of the department’s management practices, including the focus on getting guns off the street.

He says when he ran the squad, he focused on specific hit men, knowing that by putting them away for decades, he would send a message.

Barksdale said that his method of auditing casework would not have detected cops skimming money and drugs from street seizures. “But that bothers me. Do you understand how much that bothers me that they were on the force while I was there?”

He said there should be a complete critique of what happened, starting with the indicted officers’ hiring, their promotions and the supervisors who recommended them for special assignments.

He was accused of breaking a man’s jaw, breaking a woman’s arm, and arresting a woman who was selling church raffle tickets. There are two more lawsuits pending against him. His lawyer has said Hersl asked to get off the street and behind a desk before he was assigned to the GTTF in 2015.

In all, some 3,000 criminal cases made by GTTF members have been called into legal question.

Evodio Hendrix, bearded with graying hair, dressed in two-tone gray horizontal prison stripes like a character out of a Coen Brothers movie, testified dispassionately this week.

Why did you plead guilty?

“Because I was guilty.”

And what did you do?

Hendrix grew up in Ohio, moved to Maryland in 2006 with his wife, who transferred here for her job in the military. He has five children. He joined BPD in 2009. He met Taylor in the academy.

On graduation he did foot patrol all over the city, then moved to the Western District. He was placed on the Pennsylvania Avenue Initiative, an anti-drug enforcement program under Lt. Robert Smith, who in 2008 received a six-figure settlement and public apology from the department after being wrongly charged administratively with a sex offense.

Hours would be 8-4, but the men would come in at 4 and put in for overtime as if they’d already worked all day, Hendrix testified. “Say we worked for eight hours and got a couple of handguns, we’d put in for 12.”

He knew it was wrong, but no one around him ever questioned the trade-off. It was simply “the more guns we got, the more money we’d get for the overtime.”