But today’s availability, the first since guilty verdicts were announced in the Gun Trace Task Force police corruption trial, was different.

Pugh briskly took a few questions, then said she was done.

“Wait. Is the end of the press conference? Of the availability?” asked Paul McGrew of Fox45. “What about the idea of disbanding the Police Department? How would you respond to that?”

Echoing what people have been saying on the street and on op-ed pages for years, Delegate Bilal Ali (D-41st) called for Pugh to support a serious discussion about disbanding the Baltimore Police Department and remaking it from the ground up, as Camden, N.J., has done.

Such questions would be handled at a separate news conference by acting Police Commissioner Darryl De Sousa, Pugh replied.

McGrew persisted. “Since you oversee the police department, I mean–”

“We’re not disbanding the police department,” she said flatly, asserting that crime is now “trending downward” and the U.S. Department of Justice’s report on the BPD will guide future reforms at the agency

And that was that. After 13 minutes, Pugh left the room.

Overtime Audit: Tied up in Lawsuit

It was left to City Solicitor Andre Davis to answer one of the questions that Pugh passed on answering:

Why has her administration not released the audit of police overtime that she promised last March after the seven members of the GTTF were indicted on corruption charges, including overtime fraud?

Davis said they cannot release an audit because it has become part of the city’s defense of a lawsuit brought by the police union and officers who claimed they were underpaid overtime.

“It is attorney work product – privileged, protected information,” Davis explained. “The people working on the audit are working under the direction and supervision of attorneys. So I can’t say anything more.” 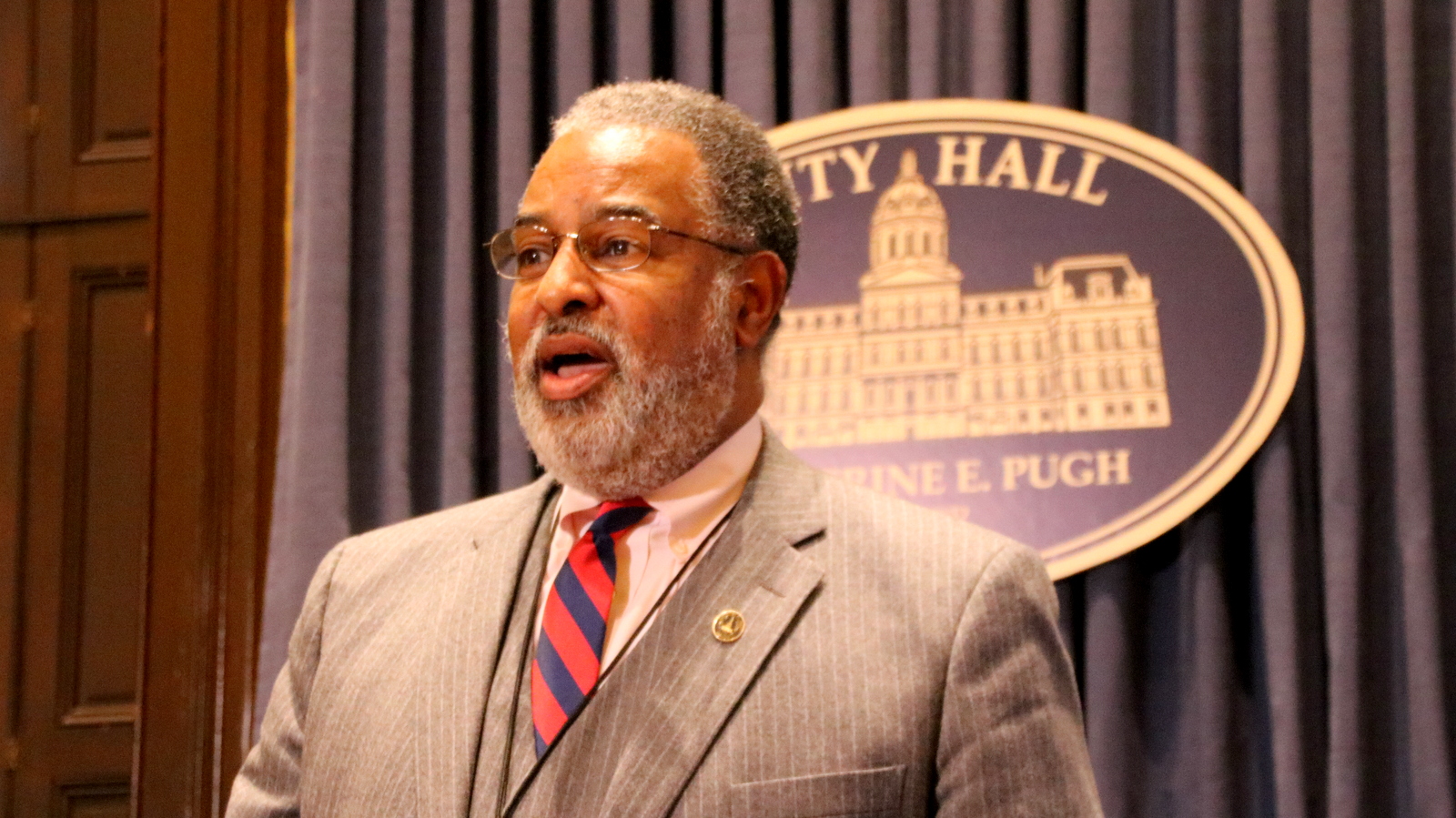 City Solicitor Andre Davis said he has no idea when the an audit of the police department, promised by Mayor Pugh a year ago, will be released. (Fern Shen)

“You’re saying it could be years before the public sees this?” a reporter pressed.

“I can’t predict how long litigation will take,” Davis replied.

The lawsuit is still “in discovery,” Davis said, when asked the status of the case. Is the audit completed? No, Davis answered.

Soaring police overtime has periodically been highlighted in recent years and flared as a political issue.

But it is difficult to tackle because the police department and City Hall have disclosed little information about overtime. A $300,000 “comprehensive external study” of overtime spending was promised by the Rawlings-Blake administration, but it never happened.

By bringing out specific instances of egregious overtime fraud and lack of police oversight, the GTTF trial brought the issue back into focus.

“I need [the audit] done as soon as possible,” Pugh said last March in the wake of the sweeping indictment.

No mention was made at the time of the lawsuit filed by police.

The other question Davis answered for reporters was about motions the city has filed in connection with the GTTF trial, which argue that the city should not be held liable for damages resulting from the actions of the officers indicted in the case.

Davis said there are two lawsuits pending, one in federal court, one in state court, involving the indicted officers.

Sued as a defendant in the federal case, Davis said, the city has “sought a judgment that the police department does not have to indemnify those officers in any amount for what they did.”

“Our position is that those officers acted outside of the scope of employment, with malice, pursuing their own interest,” he said. “They were not acting as police officers for Baltimore City.”

“Our position is that those officers acted outside of the scope of employment, with malice, pursuing their own interest.”  – City Solicitor Andre Davis

He noted that there about 45 or 46 civil claims arising from the activities of officers. “Clearly there will be additional lawsuits,” he said.

Asked if the city was concerned about the fiscal implications of the litigation, Davis merely repeated himself:

“At this point our position is, neither the police department nor the city has to indemnify anyone for any activities engaged in by the officers who were indicted and convicted.” 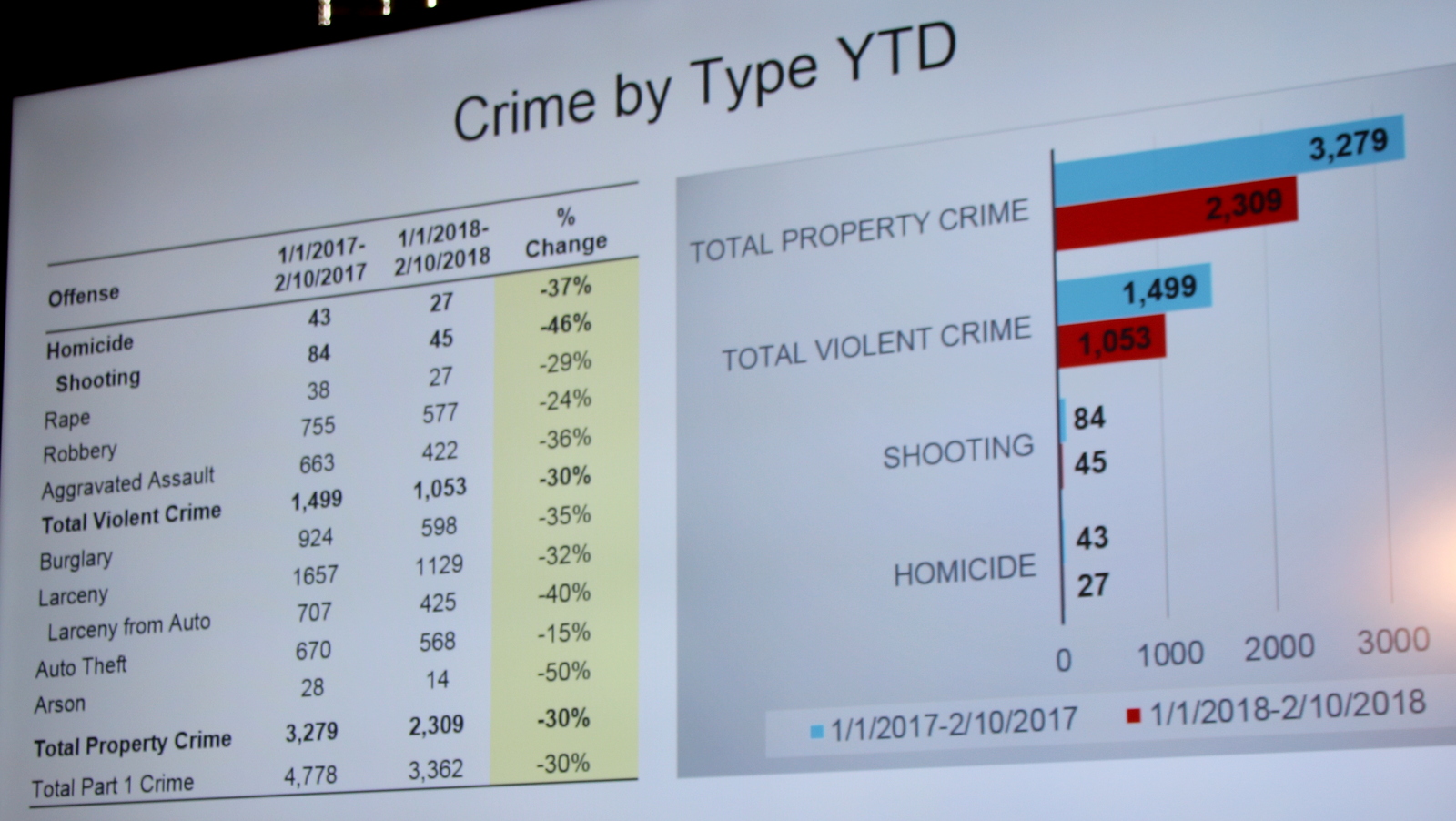 Pugh focused her press conference on charts showing that crime so far in 2018 is down compared to the same period in 2017. (Fern Shen)