Is the hot residential real estate market in Hampden spilling over into neighboring Woodberry to the detriment of its architectural heritage as a 19th century mill community?

That’s the fear of some Woodberry residents, who have learned of plans by a developer to tear down two 1840s stone millworkers’ houses to make way for a four-story micro-apartment building that has been dubbed “hipster flats.”

“Public Notice of Demolition” signs posted on the stone buildings at 3511 and 3523 Clipper Road indicate that they will be demolished on June 15, although the developer acknowledged today that he does not yet have a permit to clear the site.

Tammy Hawley, a spokesperson for the Department of Housing and Community Development, which issues building permits, said a developer can post a demolition notice that is pending.

But, she added, “it would be out of order if any work has begun before the permits have been issued.”

Photographs show that wooden additions to the buildings have been dismantled. 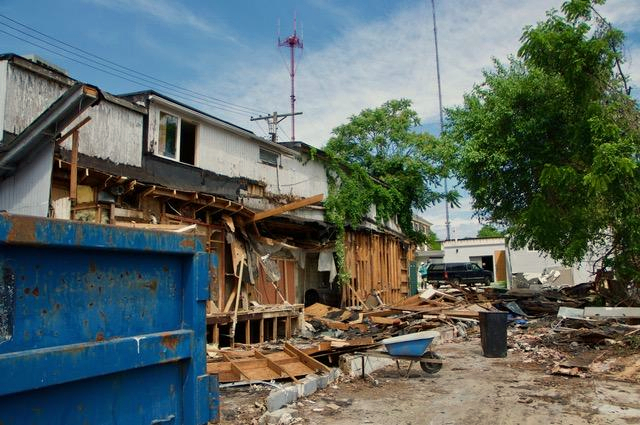 The rear of the buildings have been partially torn down, even though the developer acknowledges that he does not yet have a permit to clear the site. (Brennen Jensen)

The buildings date from the 1840s and were constructed as part of the village that grew up around Clipper Mill, one of several historic mills and factories along the Jones Falls.

The plan to tear them down is drawing opposition from Woodberry residents, who say it is part of a new wave of development that threatens to alter their community’s historic character.

“This is a major loss for the neighborhood and for Baltimore’s industrial history,” said the Greater Hampden History Alliance in a message on Facebook.

“This is terrible, but par for the course in Baltimore,” wrote Facebook commenter Jan Angevine. “Developers are destroying every historic old building and landmark in the city for profit. History, beauty and sense of place be damned.”

The properties are controlled by a development team headed by Chris Mfume of CLD Partners, who wants to construct a four-floor building with a basement containing 80 units.

Most of the units would be studios, each between 350 and 450 square feet, making them some of the city’s first “micro” residences. There would also be some one-bedroom apartments.

Al Barry of A.B. Associates is a development consultant. Pavlina Ilieva and Kuo Pao Lian of PI.KL Studio would be the architects.

The studio apartments would rent for about $1,100 to $1,300 per month and would be marketed to nurses, teachers, restaurant workers and MICA students – what Mfume describes as “workforce housing.”

He said his primary aim is to keep the prices affordable. Retaining the stone structures would increase the project’s cost.

Residents have taken photographs showing that exterior demolition has already taken place, with wooden sections to the stone structures partially torn down.
Mfume said today he has an interior demolition permit and was in the process of obtaining a full permit for demolition.

Although more than 170 years old, the buildings aren’t protected by local landmark designation.

Eric Holcomb, executive director of the Commission for Historical and Architectural Preservation (CHAP), said there was an effort in the early 2000s to designate Woodberry a historic district, but it was defeated by area property owners.

Jill Orlov, an architect-turned-artist who lives with her husband Brennan Jensen in another stone house half a block from the two targeted for demolition, said she is sick about the prospect of losing them.

“We moved here because of the history,” she said. “That view of those houses is what I see every morning when I walk my dogs. I feel like I’m living in an English village. This is one of the most intact historic districts in the nation. If you tear down these historic structures, they’re gone forever.” 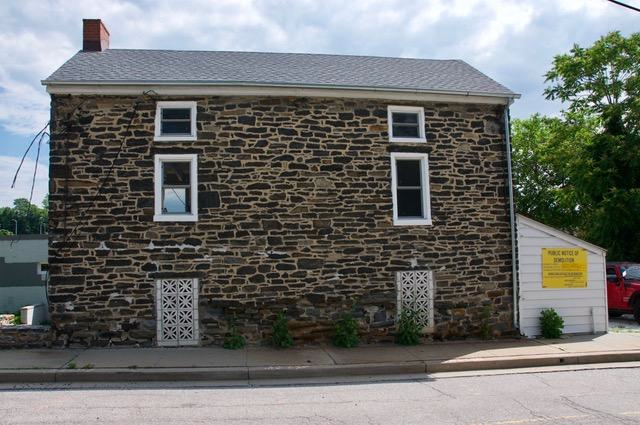 The front of one of the historic buildings some Woodberry residents are rallying to save. (Brennen Jensen)

Woodberry’s stone houses were described in a 1847 article in the Baltimore Sun as “one of the most striking features” one sees when approaching Clipper Mill.

“The dwellings are about forty in number, mostly three stories high, and built in a uniform manner, two in a block; they occupy the face of the hill which is divided from the factory by the Baltimore & Susquehanna Railroad,” the article stated.

Representatives of Valstone Partners recently met with community residents to discuss preliminary plans to redevelop four sites within the 17-acre Clipper Mill property it controls and to add potentially hundreds of residences.

Proposed buildings would be 60 to 90 feet tall, or about six to nine stories, according to the presentation. Marren Architects is working on the master plan.

Caroline Paff of Valstone Partners said the micro-apartment project is a separate development, not one of its projects.

At the meeting, several speakers in the audience said they chose to live in Woodberry because they like its walkable village ambiance, and they warned that the area’s character could be threatened by too much development and lack of parking

They voiced concerns about redevelopment of the former Pepsi plant on Union Avenue and the effect that could have on traffic in the area.

This week, several residents said they may ask CHAP to give the two stone houses temporary landmark designation as a way to halt the June 15 demolition.

CHAP’s Holcomb said today he was not aware of receiving any such request.