A political organization controlled by Smith, whose day job at City Hall pays him $182,000 a year, has sent out multiple mailers tarring Jim Brochin as a tool of the National Rifle Association and, in effect, hailing Vicki Almond as the “real Democrat” running in the June 26 primary for county executive.

Smith’s name is nowhere to be found on the attack mailers, which were sent out to tens of thousands of county voters over the last week. But the telltale name, “Baltimore County Victory Slate,” which authorized the mailing, is.

Victory Slate is Jim Smith’s creation. It dates back to 2006 when he was Baltimore County executive and used the “slate” committee to bankroll Scott Schellenberger’s quest to become Baltimore County’s state’s attorney and to elect Cathy Bevins and Tom Quirk to the county council.

Transferring money to a candidate’s account is legal under Maryland law as long as the candidate is listed as an “affiliate” of the slate.

• The mailer’s claims against Brochin reviewed below. 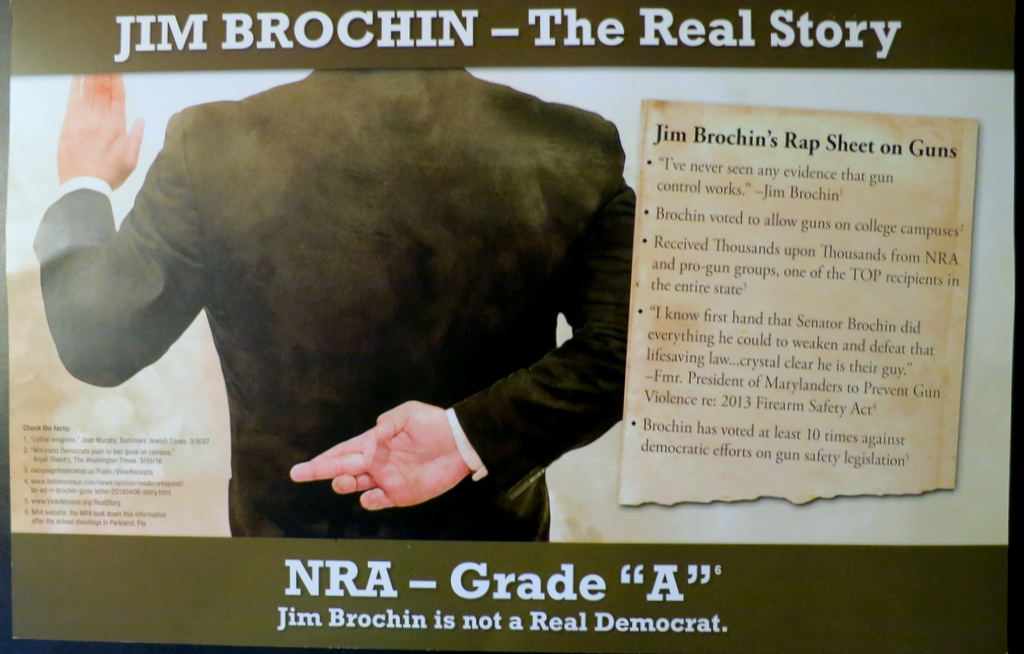 The large, glossy mailer purports to show state Senator Brochin with two fingers crossed behind his back, lying about his support for the NRA.

The Victory Slate’s influence in Baltimore elections goes back to April 2016 when, six days before the Democratic mayoral primary, it rescued Catherine Pugh’s cash-strapped campaign committee with a $100,000 loan.

The loan was illegal because Pugh was not among the county candidates the slate was set up to sponsor. Eventually, the Victory Slate was fined $3,000 for its violation of Maryland law, and Pugh was added to the slate’s candidate list along with one other city politician, Councilman Eric T. Costello.

The fine was a small price to pay for Smith, the kingmaker, and Pugh, the beneficiary of his largess.

The last-minute cash infusion arguably gave Pugh her slim margin of victory over Sheila Dixon in the primary. As for Smith, once Pugh became mayor, Smith was given a big salary, a nice office and a vague mandate about realigning and reforming government.

A month after she won the primary against Sheila Dixon, Catherine Pugh was photographed at the Wynn Resort in Las Vegas with Jim Smith and Caves Valley principal Arsh Mirmiran. (Courtesy of Baltimore Business Journal)

In recent weeks, Smith has been trying to recreate the Pugh magic by tarring a rebellious front-runner in favor of business-friendly Almond. (A third Democratic contender for county executive, Johnny Olszewski Jr., has not been targeted by Smith’s group.)

Brochin has upset the status quo by denouncing “pay-to-play” politics in the county, taking aim at Almond’s coziness with developers.

As 2nd District councilwoman, Almond pushed through zoning in 2013 that benefited Greenberg Gibbons’ Foundry Row project in Owings Mills – a client of attorney Smith at the time.

(The elder Smith gave up his “of counsel” role at Smith, Gildea & Schmidt when he became Pugh’s aide. The Towson law firm is now run by his son and his former law clerk, David Gildea. Smith fulfilled the requirement of having his primary residence in the city by renting an apartment in Fells Point, while maintaining the $350,000 Timonium condo he shares with his wife.)

The Victory Slate mailer appears to be within the law by calling on voters to support Almond, a member of the slate, even though the mailer’s clear intent is to hurt Brochin.

In Search of County Dollars

How do these machinations fit into the fundraising aspirations of Smith’s boss, the mayor of Baltimore?

After winning the Democrat primary two years ago, Pugh began tossing aside some of her longtime backers in favor of the generosity of Baltimore County developers.

Greenberg Gibbons, for example, gave $6,000 to her campaign committee (the legal maximum) shortly after she won the primary. An Owings Mills title company run by Howard Perlow forked over another $6,000.

Last year, another county insider, Steven Sibel, took over as Pugh’s finance chair. Shortly before Christmas, he gathered up a who’s who of local business titans for a fundraiser at the Caves Valley Country Club.

Sibel is a principal of Caves Valley Partners, a fast-growing concern that has many real estate projects and proposals in the city (including Stadium Square, Metro West, Cross Street Market redevelopment, Topgolf entertainment complex near Horseshoe Casino).

CVP is equally prolific in the county, where it has teamed up with Greenberg Gibbons to try to restart the long-stalled Towson Row mega-complex a stone’s throw from the county seat.

With a poll showing Brochin favored by 30% of the voters surveyed, compared to 22% for Almond, Smith’s Victory Slate, Caves Valley and others have swung into action.

On June 6, the Victory Slate transferred $20,000 in cash to Friends of Vicki Almond, according to Election Board disclosure records. A week later, the organization sent out those anti-Brochin mailers. (The cost of the mailers won’t be disclosed until after the primary.)

One day earlier, Sibel – plus colleagues Arsh Mirmiran and Arthur Adler and various CVP affiliates – handed over $18,000 to the super PAC. (Here’s some excellent reporting by Kris Henry of The Towson Flyer.)

Will this last-minute flush of dollars make a difference at the polls next Tuesday?

Maryland Matters’ Bill Zorzi laid out the financial terrain of the race this way:

Discounting the money raised by the super PAC (which cannot  coordinate its activities with a candidate’s committee), Almond entered the final week before the primary with the most cash on hand – $241,708 – after spending over $575,000 in the last month, most of it on TV advertising.

Making his shortfall of cash a badge of honor, Brochin has been blasting Almond for the backing she’s getting from Caves Valley Partners and other developers.

The anti-Jim Brochin mailer from the Baltimore County Victory Slate includes a box asking voters to “check the facts” using the links it provides. Here is what we found with the aid of researcher Jane Huth:

Mailer Claim #2: “Brochin has twice been endorsed by the NRA and received a grade of ‘A’.”
Verification: NRA website.
Result: The NRA took down the website after the Parkland, Fla., school shootings, so there is no way to see past or present political endorsements by the NRA at the website. Brochin’s campaign says that he currently has an “F” rating from the NRA, which is archived at web.archive.org.
Verdict: Unverifiable.

The mailer lists the Hampden apartment of its treasurer as its business address.

Mailer Claim #3: “Brochin is one of the top recipients of campaign donations from pro-gun groups in the entire state – thousands upon thousands of dollars.”
Verification Link: campaignfinancemd.us/Public/ViewReceipts
Result: This link takes voters to the Maryland Campaign Reporting Information System webpage, which requires voters to fill in scores of blanks to find information about campaign contributions. It would take hours or days to scrutinize the 354 pages of donors who have contributed to The Committee to Elect Jim Brochin since 2005. If the Victory Slate did this research, it provides no clue to what it found.
Verdict: Unverifiable.

Mailer Claim #4: “Brochin votes with the Republicans so much that other Democratic Senators call him ‘GOP Jim.’”
Verification: Press Conference, 6/14/18, held by state Senators Delores Kelley and Shirley Nathan-Pulliam.
Result: A Baltimore Sun article does say that Kelley and Nathan-Pulliam held a press conference and criticized Brochin as “GOP Jim.” So this claim is accurate, but the mailer neglects to note that only two senators made this claim and both are supporters of Johnny Olszewski Jr., who is also running for county executive.
Verdict: Misleading.

Mailer Claim #6: “Brochin agrees with Trump in attacking Obamacare declaring it fatally flawed.”
Verification: “Senator Jim Brochin analyzes causes of national election results,” The Towerlight, 11/18/16.
Result: In this article Brochin, who works in the insurance industry, criticizes Obamacare and says he agrees with Trump’s plan to reform it. (He notes, however, that he did not vote for Trump.) Here’s Brochin’s entire quote: “I can tell you firsthand Obamacare is fatally flawed and almost incoherent to deal with and is broken and needs to be fixed.” So, this claim checks out.
Verdict: True.

Mailer Claim #7: “Brochin has been a friend to the NRA”
Verification link. http://www.baltimoresun.com/news/opinion/readersrespond/bs-ed-rr-brochin-guns-letter-20180406-story.html
Result: This link is to a letter to the editor in which a reader claims Brochin tried to defeat the 2013 assault weapons ban, which Brochin ultimately voted for. There’s no way to verify whether or not the accusation is true without facts to support the reader’s opinion. Brochin did accept donations from the NRA until 2012 when he stopped his support for the gun organization after the Newtown massacre.

6/22/18 UPDATE: Vinny DeMarco, founder of Marylanders To Prevent Gun Violence and author of the above letter, says the following:
“Jim Brochin voted against stopping an NRA-backed filibuster that was designed to prevent a vote on the 2013 law that banned assault weapons and required a license for handgun purchasers. This was the critical vote on the bill, and the motion to end debate only passed by one vote.  Brochin also voted for two Republican-sponsored amendments that would have removed the most important parts of the bill, which were the licensing and fingerprinting of handgun purchasers. Since the bill ultimately passed by a wide margin, his final vote for the bill was much less important than these three bad votes.”
Verdict: Under dispute.

• 1 claim true (involving Brochin’s opinion of Obamacare, not the NRA).