For office workers in downtown Baltimore, Lawrence Alexander was a familiar figure, greeting early arrivers with a cheerful wave from the bus bench where he typically slept.

For Mayor Catherine Pugh, Alexander was, among other things, a political problem when he was found dead beside the bench in front of City Hall, just days after she was sworn in on December 6, 2016.

For his far-flung family, though, “Lawrence” was still alive in their hearts and minds.

He remained the headstrong and mischievous brother who joined in on ambushing their mom with snowballs when she returned to their home in the Bronx, New York, from her job as a Bristol-Myers Squibb mail clerk.

“We’ve been searching for him for years,” said Daniel Alexander, who last saw his brother in 2000. ”I got a call from him years ago. That’s why I never changed my phone number.”

In May, the family found out what people in Baltimore have known for a year-and-a-half – Lawrence had died on the ground on a cold night in Baltimore.

On Monday his sisters, brother and mother came from North Carolina and Georgia to receive the urn containing Lawrence’s ashes.

They were overcome with a cascade of emotions. Grief to have lost him. Joy to have at last “found” him. And anger that no one in city government had tracked them down to let them know their loved one had passed.

“We are not that hard to find. It’s like they didn’t even try,” said Faith Alexander, in the office of homeless advocate Christina Flowers, who had provided housing for Lawrence and knew him. 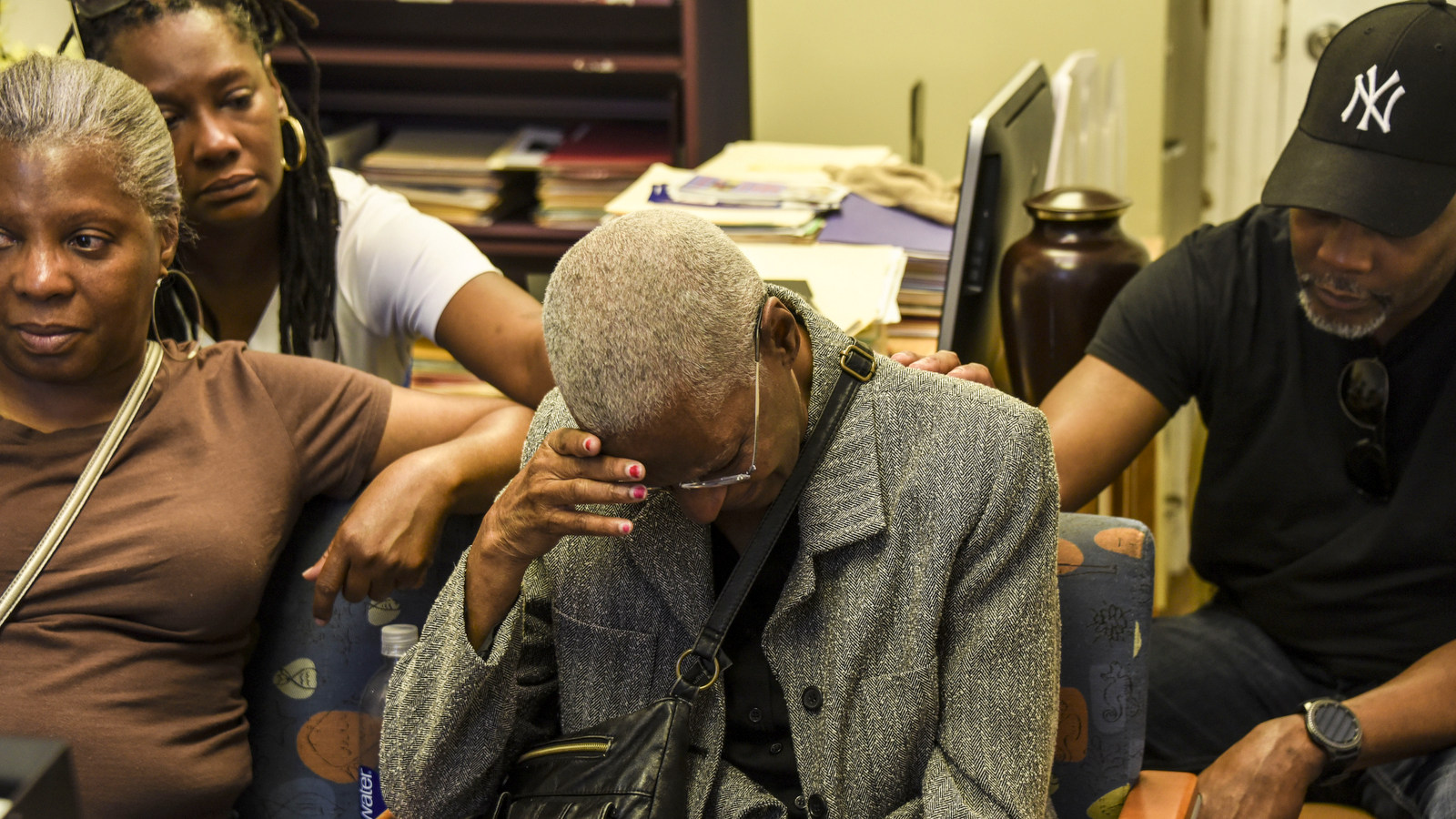 From left, Vanda, Faith and Daniel Alexander comfort their mother, Teresa Singleton, as Lawrence Alexander’s ashes are returned to the family. (J.M. Giordano)

Holding back her own tears, Faith reached over to comfort her.

Daniel, who had kept his hand resting firmly on the urn, moved it to his mother’s shoulder, holding it there as she wept.

Paying for a Funeral

The story of how Alexander’s ashes came to be sitting in the window of Belvedere Assisted Living on Charles Street centers on the person who heads it, Flowers, who has survived controversy to remain a persistent presence on city streets where she offers homeless people housing.

Flowers alerted the media the day she learned of the 54-year-old’s death. Worried no one would ever be located to claim his remains, she contacted the medical examiner’s office in order to do so herself.

“I just wanted to get his body so we could have a funeral for him,” she said. “They told me ‘no’ because they were looking for his family.” 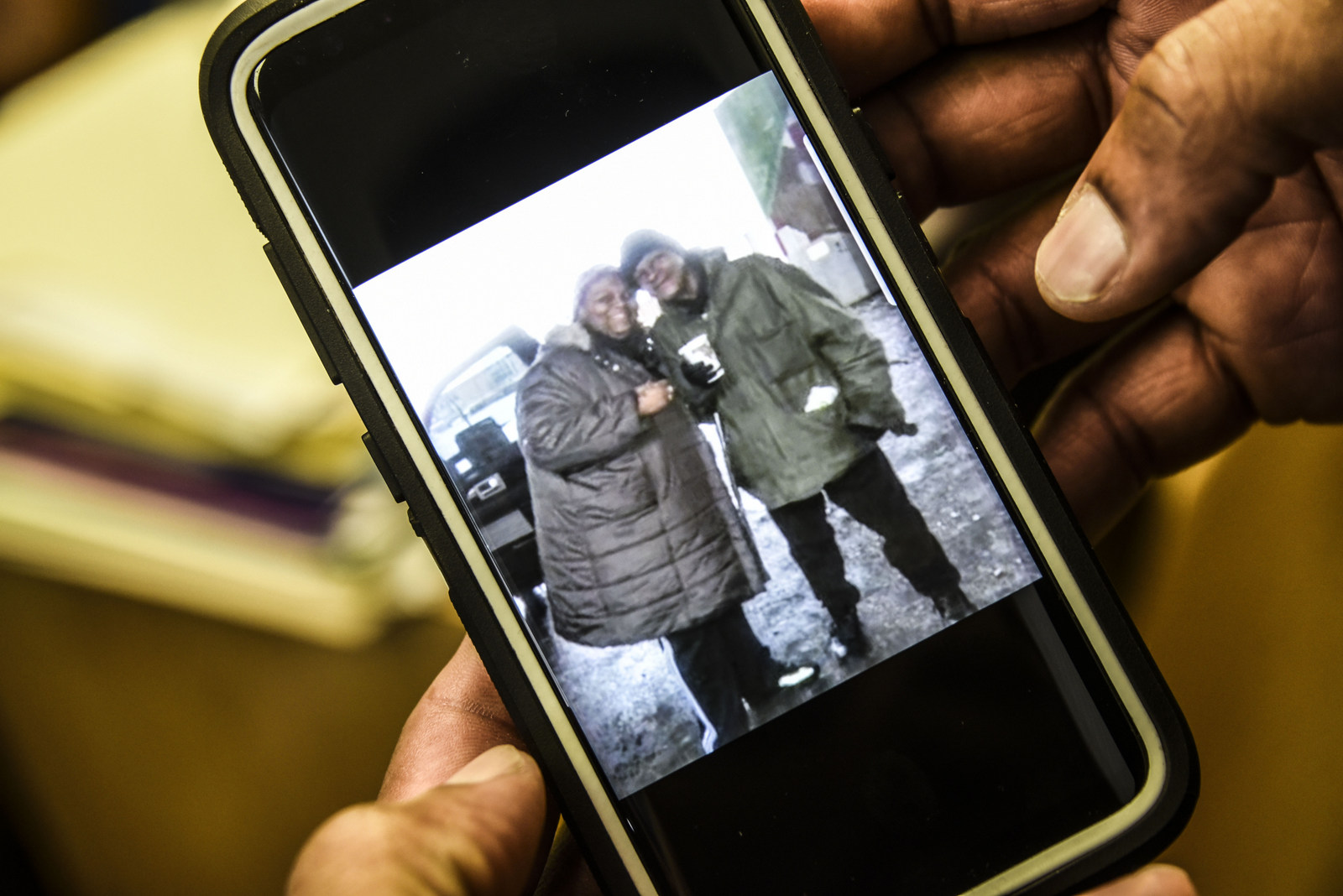 A photo of Lawrence Alexander with Christina Flowers, who provides housing for homeless people in Baltimore and gave the family his ashes. (J.M. Giordano)

Two days after viewing his body at the funeral home, Flowers said, she was given his ashes (“All I had to pay for was the urn”) and organized a service for him at Baltimore’s St. Vincent De Paul Church.

People who knew him, homeless activists and even a member of the Police Department’s Homeless Outreach Team attended. Others familiar with Alexander held a separate service for him at Mt. Zion Lutheran Church on the other side of the plaza.

How did Lawrence’s family lose touch with him?

His siblings describe a happy childhood that started in southern Maryland but ultimately was spent in New York City. They recall being taken to the park and the ice skating rink near Yankee Stadium and, for vacation, going to Bear Mountain outside the city.

“We would dress up and put on shows,” Vanda Alexander recalled, cracking up. “We would put on wigs and everything,” Daniel recalled, chuckling, too.

Lawrence encountered an unusual challenge that set him apart from his siblings. As a toddler, he had an ear infection that went untreated during a time when his mother underwent a lengthy hospitalization and he was in the care of others.

It left him deaf. 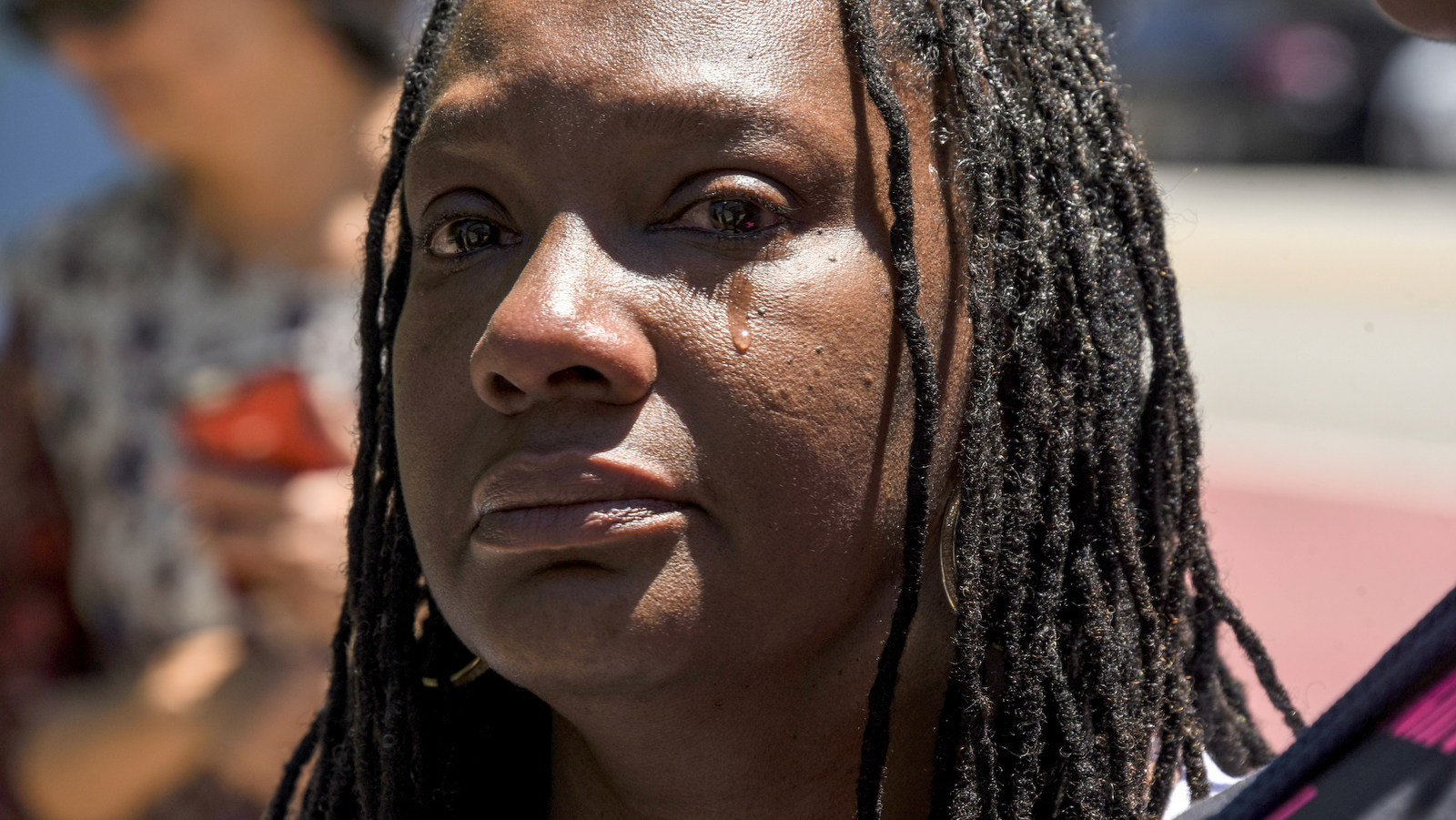 Faith Alexander said she had been searching for her brother Lawrence for years. (J.M. Giordano)

But Lawrence was able to make himself understood and to understand others. The siblings recalled other things about their brother. He was good at art and great at fixing cars. He worked for Goodwill Industries at one point.

About 15 years ago, after Lawrence and his mother had returned to Maryland, the apartment building where they lived was slated for an upgrade and they and other tenants were evicted.

Their mother found a different place for him to live in southern Maryland, but Lawrence didn’t want to go.

As a toddler, Lawrence had an ear infection that went untreated during a time when his mother underwent a lengthy hospitalization and he was in the care of others. It left him deaf.

“He started running with the wrong crowd and messing with drugs and stuff,” Daniel said.

“He wanted to go to Baltimore. I told him, ‘You don’t know anybody there,’” Singleton said. “He was stubborn.”

After that, the family’s contact with Lawrence was sporadic.

Vanda said she would periodically check the city jail in the hope that they would at least give her a fixed address. Faith, who lived in Baltimore for a time, would keep an eye out for him on city streets. Daniel replayed in his mind the one phone conversation he had with Lawrence. 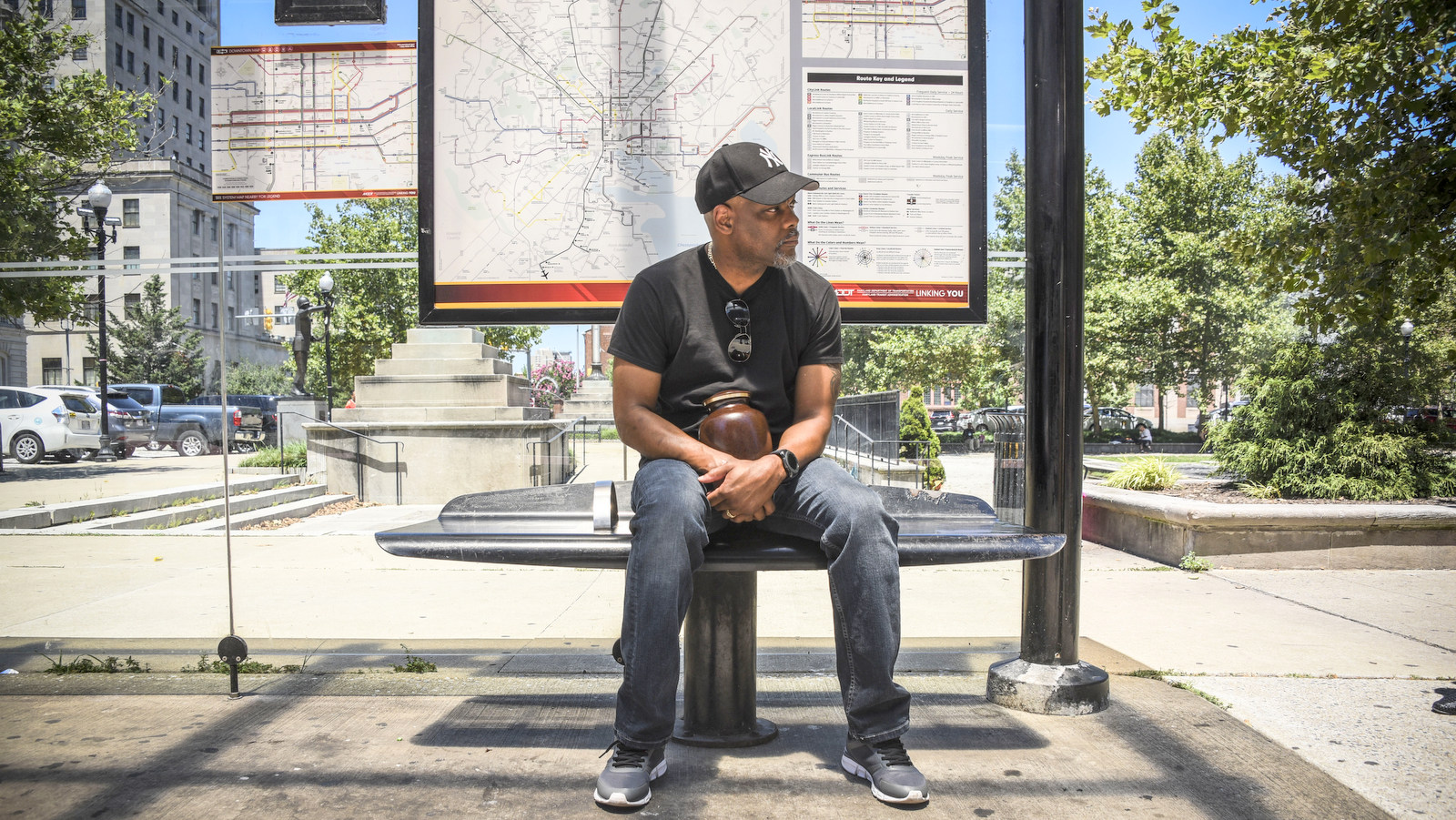 Finally, they got someone to do a thorough Internet search that turned up past addresses in Baltimore, which led them to Flowers.

“I asked her if she knew how we could reach our brother, and there was dead silence,” Faith said.

Maybe what Flowers told them was wrong, maybe it was someone else, she told herself, until she saw a photo and knew it was true.

“I never thought in my life we wouldn’t grow old together,” she murmured. “I can’t believe he’s gone.”

Receiving the ashes was only one part of the family’s mission Monday.

They were determined to see the place where Lawrence spent his last moments. Accompanied by 10-year-old Jordan Bye, Lawrence’s grand-niece, they stepped onto the busy sidewalk under a blasting midday sun.

Faith knelt and rested her head on the utility pole her brother’s might have touched. Daniel sat quietly on the bus bench, holding the heavy mottled-brown urn.

What the family saw driving around Baltimore shocked them. “People sleeping literally in the street where they could get run over,” Vanda said. “That’s heartbreaking.”

“Where can I buy some bottled water?” she asked, explaining that she wanted a 24-pack so she could hand out bottles to people who were thirsty. At one point, she contemplated driving miles to a discount store she found online. 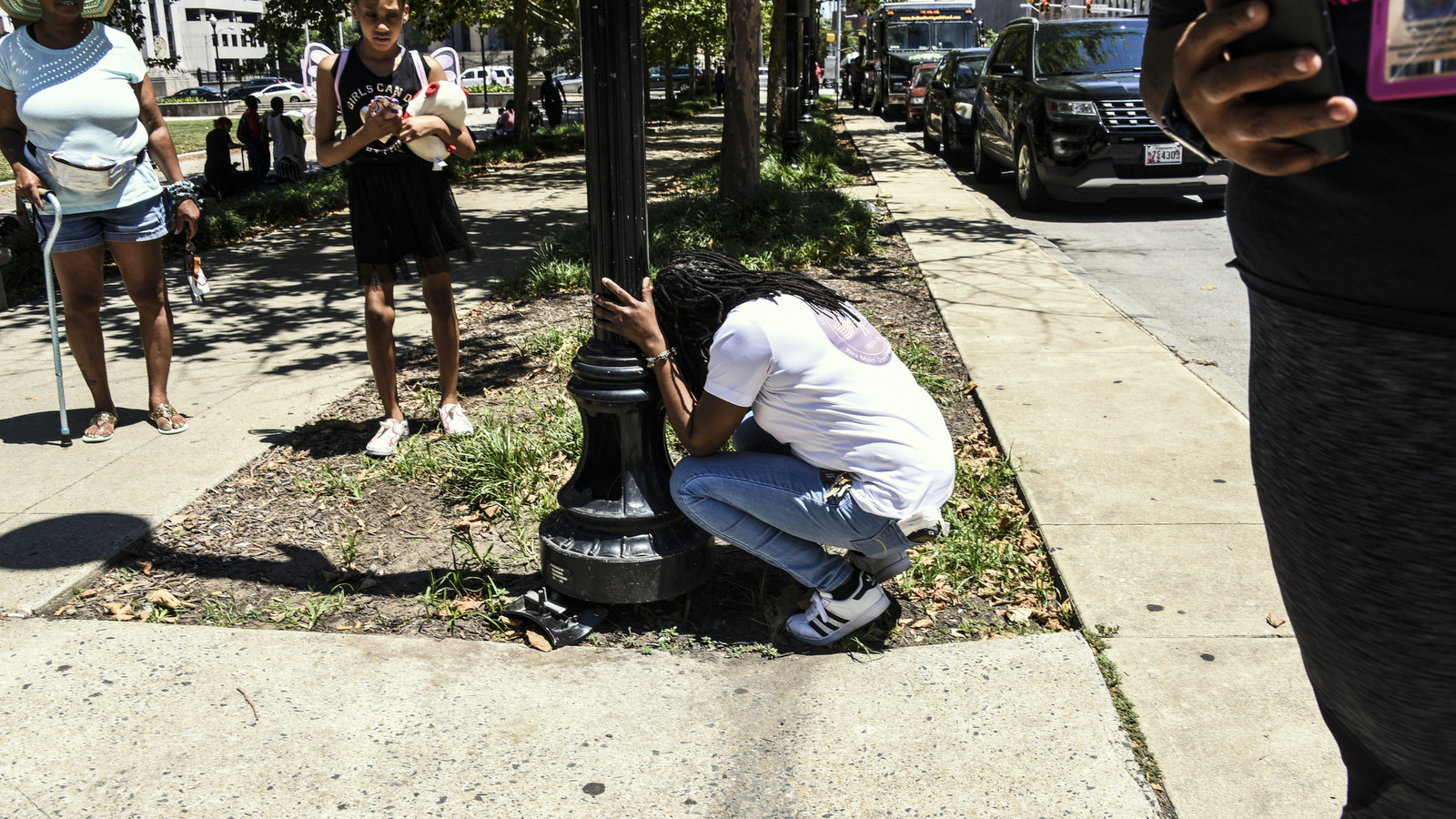 “I’m overwhelmed,” Faith Alexander said at the spot where her brother died on December 10, 2016. (J.M. Giordano)

Three city workers on lunch break came to their aid. They had just bought that size pack, they said, offering to give it to them and refusing to take any payment. “I couldn’t believe it,” Vanda said.

Sgt. JoAnne Wallace, of the BPD’s Homeless Outreach Team, embraced the family members and told them she had brought flowers to Lawrence’s church service. Then she resumed handing out slices of pizza to people in the plaza telling them, “You get clean, I got a job for you.”

Moments after that, one of the homeless people on the plaza, Robin Serrett, sat in the shade with Lawrence’s mother and told her that police consider people like him “an eyesore” and roust them from their sleeping places.

“Something’s Got to Change”

What did they think of the misery, and the moments of mercy, on display all around them?

“I’m just overwhelmed right now,” Faith said, looking at her siblings handing out the water while some people approached the officers for pizza and others lay quietly on blankets on the stone ledges.

“I do know I feel Lawrence’s presence here,” she said.

What the family saw driving around Baltimore shocked them, family members agreed.

“People sleeping, not on the sidewalk, but literally in the street where they could get run over,” Vanda said. “That’s heartbreaking.”

Faith was asked why they agreed to talk to a reporter about her brother’s life and death. She answered readily.

“I want change, not just here but everywhere. Something’s got to change,” she said.

“I want people not to dismiss a person just because they’re homeless.”
_____________________
The work of photojournalist Joe Giordano has appeared in The Wall Street Journal, The Guardian, The Washington Post, Baltimore City Paper, Discovery Channel, Inc., Rolling Stone and many other publications.