At the direction of a “former management employee,” the Baltimore Department of Social Services misused nearly $2 million intended for poor children and did not properly account for another $5.5 million, a state legislative audit has found.

From $500,000 given to a nonprofit for foster care work that was never performed to $1.3 million secretly funneled to an out-of-state vendor – the former employee arranged a host of questionable payments that are now being scrutinized by state prosecutors, according to auditor Thomas J. Barnickel III.

The audit does not name the former employee, but informed sources say it is Molly McGrath Tierney, who ran Baltimore’s social services agency for nine years, winning acclaim “as a fierce child-welfare advocate” before resigning last August.

The period covered by the audit – 2014 to 2017 – coincides with Tierney’s tenure heading the agency.

Sources say the unnamed nonprofit is the Family League of Baltimore, a quasi-public organization set up in 1991 to improve the lives of poor children and their families.

Jonathon Rondeau was the League’s president and CEO between February 2013 and July 2017. He is currently CEO of The Arc Central Chesapeake Region, which serves people with developmental disabilities mostly in Anne Arundel County.

Reached separately yesterday, Rondeau and Tierney, now a senior manager at the global consulting firm Accenture, said they had no knowledge of the audit and could not comment.

“This is the first I’ve heard of it,” Tierney said in a phone interview. “I’ve been away from the state for more than a year, so I’m not knowledgeable about these things.”

Tierney said she could not hazard a guess as to the identity of the “former management employee” who authorized the payments during her tenure as DSS director.

Rondeau declined to answer specific questions about the audit and referred all matters to the Family League.

The Brew subsequently provided Tierney and Rondeau with copies of the audit and asked them to respond to its allegations. Neither has done so. 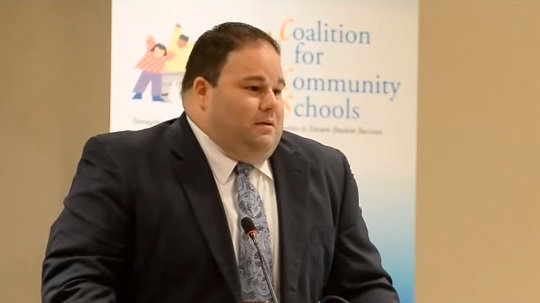 Demaune Millard, the Family League’s current CEO, was reported to be on vacation this week and not available.

Millard was the nonprofit’s chief strategic officer and chief operating officer during the period covered by the audit.

Tierney and Rondeau were emailed copies of the audit. Neither has responded to the charges.

The current administrators at DSS and the Maryland Department of Human Services say they “concur” with the audit findings.

“We seek to operate with the highest level of integrity and prudent fiscal management,” the agencies said in a joint statement included in the audit report.

“Since receiving the preliminary discussion notes from the Office of Legislative Audits (OLA) and as recommended by OLA, leadership has been in contact with the Office of the State Prosecutor and have pledged to reform the agency’s procurement practices.”

State Prosecutor Emmet Davitt did not return a telephone call about the status of any investigation into possible wrongdoing.

Funds for a Phantom Project

The audit is based on a review of $12 million in contracts between DSS and the nonprofit between June 2014 and May 2017.

• At the direction of the “former management employee,” the nonprofit invoiced DSS $500,000 for the planned rehabilitation of a school building for expanded foster care that never happened.

Auditors said the payment was approved by the former employee on September 30, 2016, even though the same employee had cancelled the project two weeks earlier on September 14.

“The actions of the former management employee raise serious questions regarding the intended use of the funds, since the agreed-upon services could not be performed without the acquisition of the school building,” the report stated.

Auditors found the $500,000 still in the hands of the nonprofit.

Asked about this transaction, Tierney said, “There was a period of time when the city was disposing of excess property that often included school buildings. We considered working with a city agency, but in the end decided it was not right for us.”

Asked if she had authorized the $500,000 payment, she said, “I do not recall the details of this. But I can tell you the funding that was spent at DSS went through a variety of controls before any funds were spent.”

Rondeau declined to talk about the transaction. “I’ll just have to refer you back to the Family League,” he said.

Thirteen months after the project had been cancelled, the auditors found the $500,000 was still in the nonprofit’s bank account.

The new managers at DSS said they had intended to allow the nonprofit to retain the funds “for other initiatives.”

The auditors then brought the matter to the attention of Human Services, the state agency that manages Baltimore’s welfare programs. The state “recovered” the $500,000 last December, the report said.

• The same former management employee “circumvented state procurement regulations” by directing the nonprofit to pay an out-of-state vendor for work performed “without any review or direct knowledge” by the nonprofit, according to the audit.

The vendor’s costs, which dated back to 2009, were then incorporated into invoices submitted by the nonprofit to the agency.

By this means, $1.3 million was drawn out of public funds mostly for substance abuse treatment programs, according to the report. Some of the programs were designed to help parents reunite with children placed in foster care.

The unnamed vendor “was a previous co-worker of the former management employee,” the audit says.

Current management at DSS “could not confirm or document the specific services or work products . . . provided by the out-of-state vendor to support the hours charged,” the report continued.

“While we were able to locate certain reports and correspondence indicating that some work was performed, DSS had no assurance that the amounts paid were commensurate with the services performed.”

Asked about the vendor yesterday, Tierney declined to provide the vendor’s name or other information. “I just don’t recall,” she said. “It’s an enormous budget over there at DSS.”

• Under Tierney’s leadership, the agency did not require any supporting documentation for $5.5 million going to the nonprofit. Most of the funds went to subcontractors who are supposed to provide child and family welfare services in the city.

DSS “did not obtain supporting documentation for any of these charges,” the audit said.

• $22,100 was spent for tablets and other computer equipment shipped to or picked up by the former management employee.

None of the purchases was recorded on the state’s equipment inventory list. The location of some of the equipment is still unknown, according to the audit.

The current head of DSS, Stacy L. Rodgers, and state Human Services Secretary Lourdes R. Padilla said in response to the audit that the agencies have located the computers in the possession of current employees.

They said the computers have now been properly tagged and “will only be used for official state business.”