A Baltimore police officer shown in a viral video repeatedly punching and tackling a man yesterday is under scrutiny, along with the agency that recently trained him and gave him top honors when he graduated from the police academy in April.

The officer, suspended with pay and identified by multiple sources as Arthur E. Williams, was hired by the city in May 2017.

In the video, Williams can be seen raining blows on Dashawn McGrier, who does not fight back even as he takes punches to the face and head.

Williams’ partner, who has also been suspended with pay, stands by watching as Williams tackles McGrier onto rowhouse steps, holding the 26-year-old’s face down on the sidewalk in what appears to be pooling blood.

It shows Williams as the star of the police academy’s April 18 graduation ceremony, attended by Mayor Catherine Pugh, Councilman Brandon Scott and a host of dignitaries.

Williams is announced as the bearer of “the colors” of the 41-member graduating class as they march in. Midway through, Williams takes top honors in three areas – including an award for “defense tactics, physical training and emergency vehicle operation.” 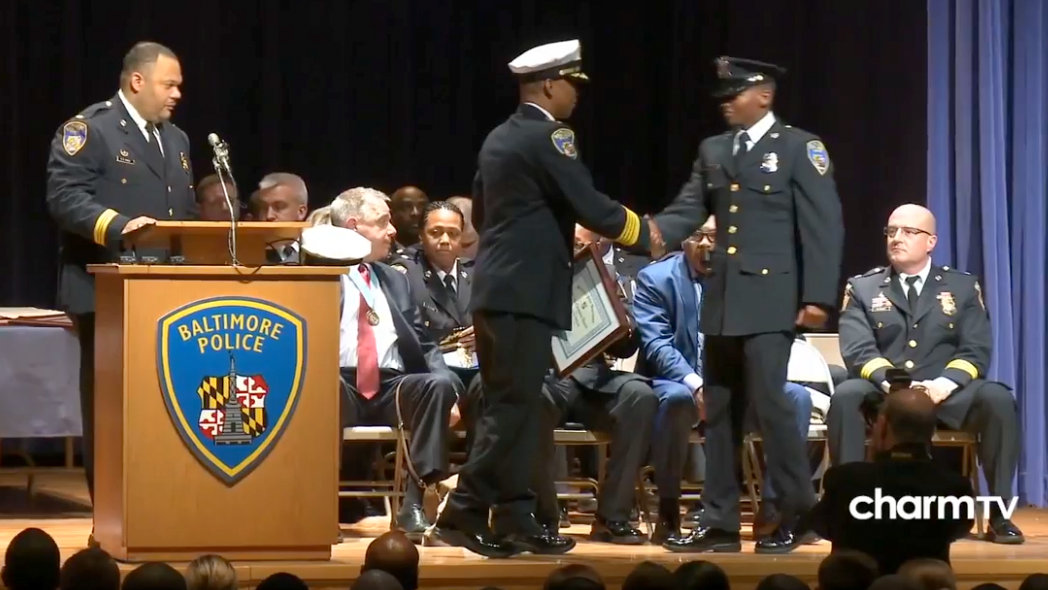 In announcing the officer’s suspension yesterday without identifying him by name, Interim Police Commissioner Gary Tuggle said that the video left him “deeply disturbed.”

“I have zero tolerance for behavior like I witnessed on the video,” Tuggle said. “Officers have a responsibility and duty to control their emotions in the most stressful of situations.”

An Encounter that Escalated

In its prepared statement to the media, police said the incident occurred at 11:45 a.m. when officers “were working a special cross borders crime initiative in the area of the 2500 block of [East] Monument Street.”

“Two officers encountered a man, whom one of the officers is familiar with,” police said. “After the first encounter, officers released him and the[n] approached him again to provide him a citizens contact sheet. When he was asked for his identification, the situation escalated when he refused.”

After videos of the assault began circulating, BPD’s Office of Professional Responsibility “was immediately dispatched to the area,” and Tuggle suspended the officer with pay. The other officer who stood by during the encounter was placed on administrative duty.

The State’s Attorney’s Office “was contacted and provided information related to this case,” the release said.

McGrier, who was was not criminally charged, was taken to a hospital and, according to his attorney Warren Brown, “was having X-rays taken of his jaw, nose and ribs late Saturday for suspected fractures from the altercation.”

The videos of yesterday’s beating and the April graduation ceremony aren’t the only ones featuring Williams that are circulating today.

Another shows what appears to be McGrier and Williams in a previous run-in.

Online records show that McGrier was charged with assaulting an officer, disorderly conduct, obstructing and hindering, and resisting arrest in the June 26 incident. A preliminary hearing in the case is scheduled later this month.

Councilman Scott said on Twitter last night that Tuggle was right to suspend the officer, but added that the officer should be fired.

Councilman Ryan Dorsey added that the officer should also have been criminally charged.

“The partner should have put him straight in cuffs, for real,” Dorsey observed on Twitter.