The Pugh administration today paid $30,000 to settle a gross negligence lawsuit involving a police officer who was earlier seen violently beating a man outside of a nightclub.

The Board of Estimates approved a $30,000 cash payment to the mother of an 11-year-old boy who suffered from traumatic brain injury after he was struck by a police cruiser driven by Officer Nicholas G. Lancetta in 2015.

A few months before this incident, Lancetta was one of five officers whose beating of a man outside of Melba’s nightclub was captured on cellphone video. Last year, Pugh and the spending board paid $135,000 to resolve that case.

Today’ settlement – which includes a “gag order” barring the child’s family from talking to reporters or on social media – stemmed from Lancetta responding to a May 14, 2015 call.

The Brew has filed a federal lawsuit challenging the city’s use of these “gag orders,” non-disclosure agreements applied to most civil settlements involving police misconduct.

The boy was hit as Officer Lancetta responded to a call of a car break-in in progress, according to the narrative released by the Board of Estimates.

Heading south on Falls Road “at approximately 30 to 40 mph,” he reportedly swung around a stopped car at Cox Street and struck the boy, who was crossing the street after the driver of the stopped car had waved him forward.

A day shy of his 12th birthday, Purnell Summerville III was rushed to Johns Hopkins Hospital where he was treated for “serious and critical injuries, including a traumatic brain injury and a broken right leg,” according to the narrative. 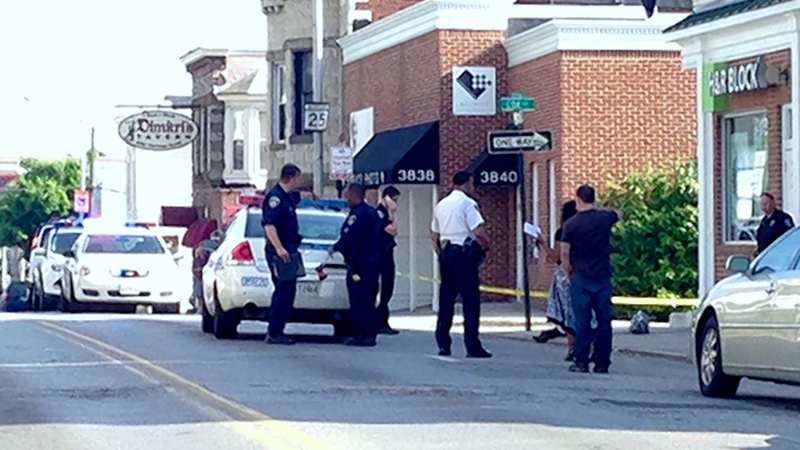 Police examine the corner of Cox Street and Falls Road where the 11-year-old was hit by Officer Lancetta’s cruiser. (WMAR)

According to WBAL-TV and eyewitness accounts, Lancetta had not activated his siren or flashing lights as he rushed down Falls Road and swung onto Cox Street.

Nevertheless, the city argued that he was immune from liability because he was performing an emergency service.

In response to a civil lawsuit filed by Summerville’s mother accusing him of gross negligence, the spending board paid $30,000 “to avoid the expense, time and uncertainties of further protracted litigation.”

In the incident at Melba’s, Lancetta and other officers tasered and beat Jamar Kennedy after he had been removed from the nightclub by a bouncer.

Cellphone video released to the media shows Kennedy being knocked to the sidewalk and pummeled by batons as he tries to shield himself from the blows.

Stunned by a second taser, Kennedy was arrested and taken to jail, only to be released when the video surfaced.

Then-Police Commissioner Anthony Batts called the officers’ use of force justified, and Lancetta and his four colleagues were cleared after an internal investigation. 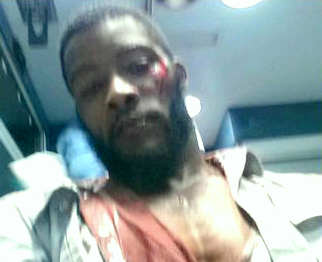 A photo of blood-stained Jamar Kennedy after his 2014 beating by police, according to his attorney. (Brew file photo)

Kennedy filed a lawsuit against the officers and the city that resulted in the $135,000 settlement approved by Pugh and Board of Estimates last November 8.

According to online records, Officer Lancetta was hired by the BPD in 2013 and was paid $76,373, including overtime, last year.

Police spokesman T.J. Smith has not responded to a query about whether Lancetta remains on the force and what duties he performs.