Pent-up emotions exploded yesterday on the University of Maryland Baltimore County campus in the wake of a lawsuit alleging the school ignored or covered up rape reports.

Some students – among them sexual assault survivors – read from a list of demands detailing why specific UMBC officials should be fired or suspended.

“For allowing this issue to fester unaddressed,” said John Platter, a 19-year-old junior, “we demand that the entirety of the upper administration apologize.”

Others stepped out of the crowd of nearly 200 people to speak spontaneously, including one woman who described how school officials had said “there wasn’t enough evidence” to discipline the student who she said was sexually harassing her.

“Every time I still see him on campus I get so scared I freak out. I feel like I can’t do anything. I feel really unsafe,” she said, tears rolling down her cheek as she spoke through a megaphone.

“I don’t like walking around by myself. And he’s still here,” she said. “He’s still sexually harassing people. And no one is doing anything about it.” 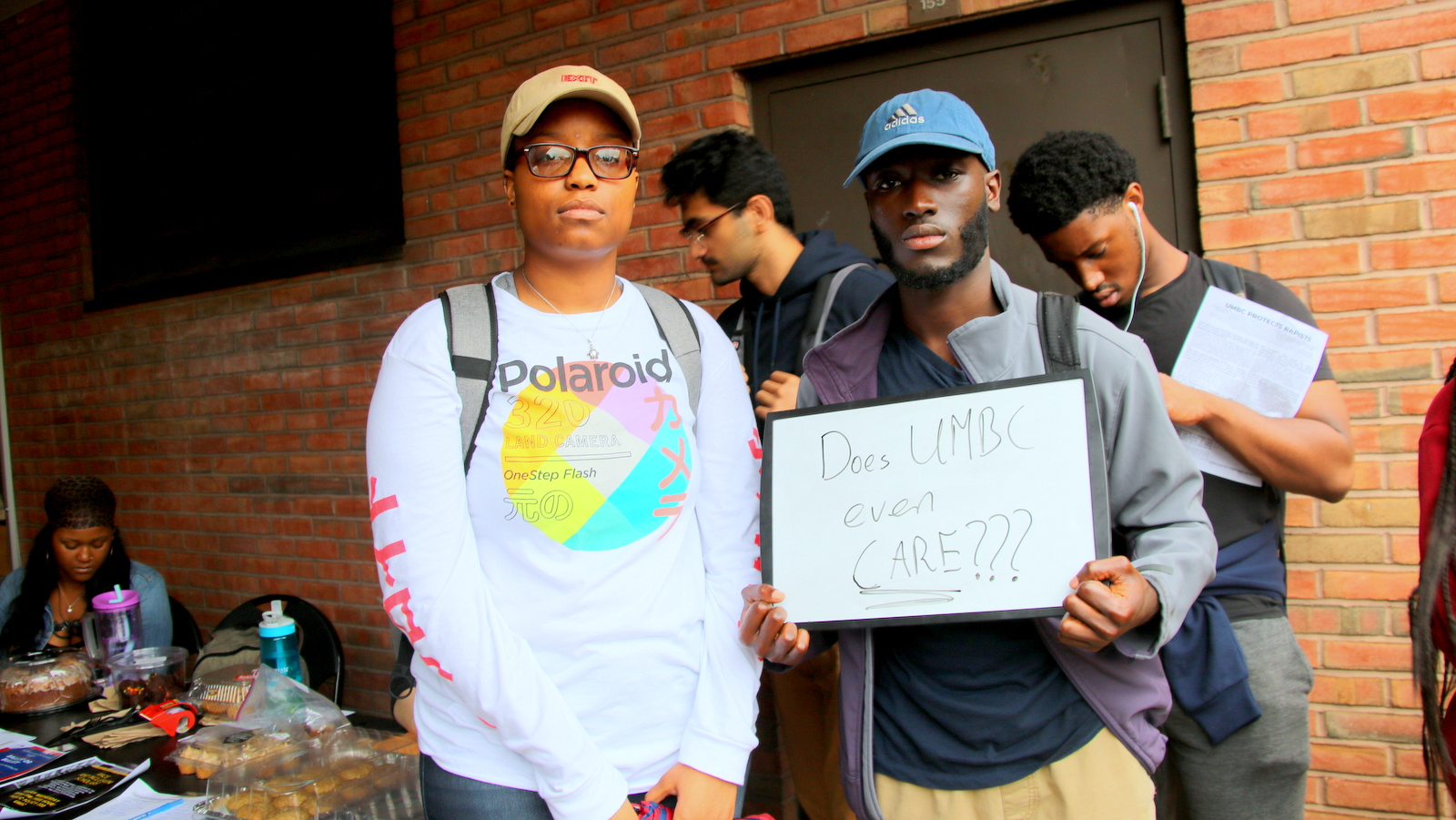 The protest held outside the campus commons was organized in the wake of the disclosures in a federal class action complaint filed in U.S. District Court last week by two former UMBC students.

It charged that school officials and campus police, as well as Baltimore County police and prosecutors, have been mishandling rape reports for years and in some cases obstructing justice to do so.

“This is not a ‘failure to protect’ lawsuit; it is about intentional misconduct designed to cover up justifiable complaints of sexual assault,” the complaint states.

Among its allegations: that UMBC police chief Paul Dillon – approached by a student who had been gang raped by three members of the school’s baseball team – talked her out of filing a complaint with Baltimore County police.

“There really is no safe space if this is what’s been going on,” said Yasmin Carter, 20, a junior, who had been listening to the speakers and reading from a flier headlined “UMBC protects rapists.”

Carter said she was troubled to learn from classmates how much UMBC President Freeman A. Hrabowski III allegedly knew about the actions and practices outlined in the complaint.

“Does UMBC even care?” said the sign held by the student standing next to her, Tiwa Topia, a 21-year-old senior, suggesting that topic was on his mind as well.

With the school community in an uproar over the weekend, and fliers taped up around campus calling for Dillon and other school officials to be fired, Hrabowski sought to assure them that he did care.

On Sunday, Hrabowski invited student leaders to his office to listen to their concerns. Yesterday he hosted a group of students who had marched to his office after the rally.

“Let me certainly apologize. Clearly we have not done a good enough job,” he said, promising to do a lot more. 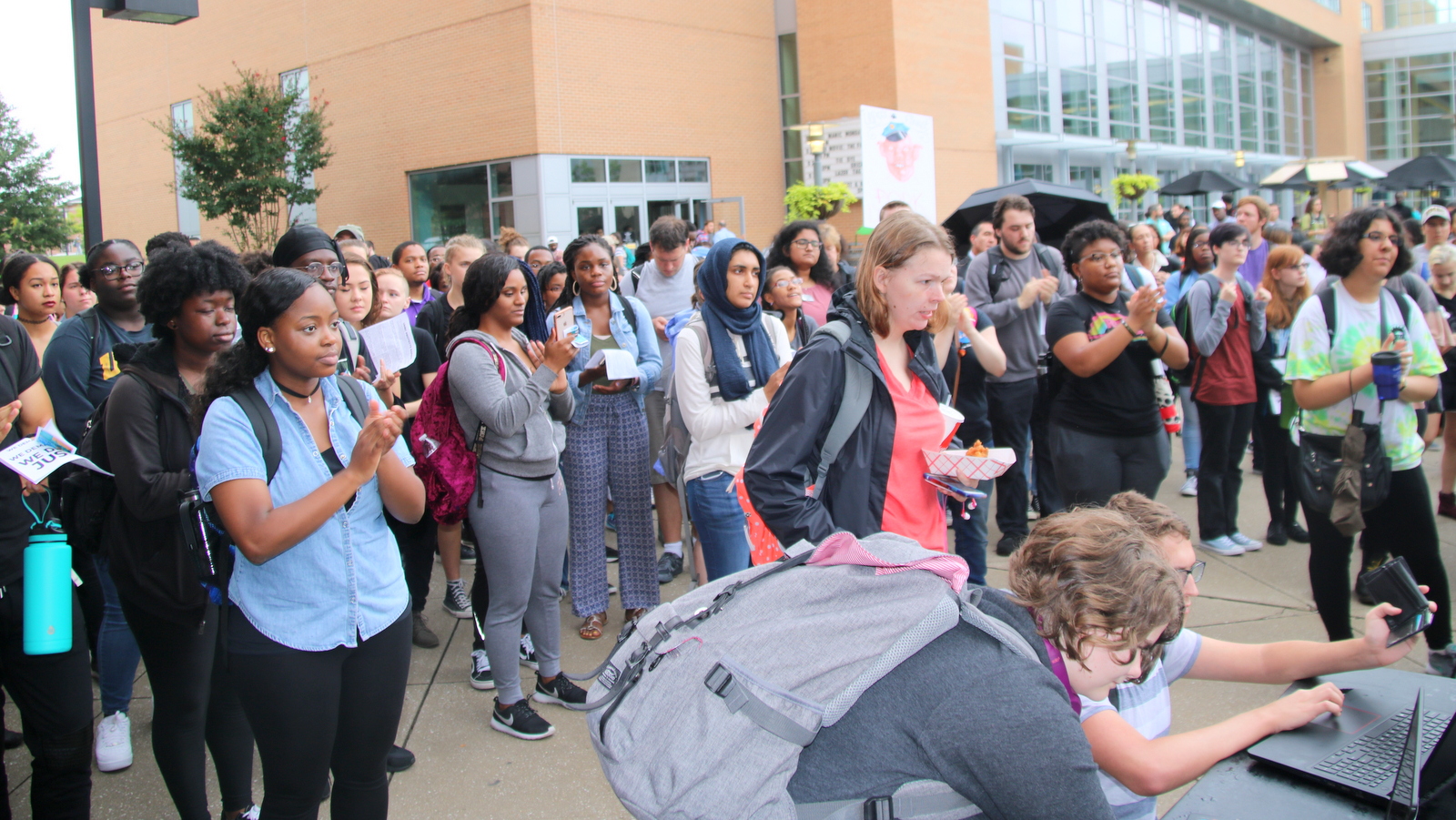 Students sign a petition calling for the ouster of UMBC officials in the wake of a class action suit by two former UMBC students who said the school mishandled their reports of sexual assault. (Fern Shen)

On Thursday, students will be given another opportunity to vent – a 3:30 p.m. “listening session” organized by the administration.

Under the guidelines for the coming event, students must fill out an online form in order to speak or ask questions. That form includes a legal disclaimer saying that it “is not intended for purposes of reporting sexual assault or relationship violence.”

The form also directs those with Title IX reports to take them to Bobbie L. Hoye, Title IX Coordinator in the Office of Human Relations.

Hoye, who also represents the university as assistant general counsel, is one of the school officials singled out for criticism by the coalition of students that organized yesterday’s protest.

“For her unwillingness to pursue the full process of justice in Title IX investigations, for her constant delay and mishandling of cases, for her lack of communication,” the student grievance statement read by aloud yesterday by student organizer Nate Stewart said.

The students said Hoye should be suspended pending investigation, as should Bob Mumma, head coach of the Retrievers baseball team, Erick Kim, Title IX investigator, and Carlos Alexis Turcios, “for knowingly employing a student while said student was the subject of a rape investigation.”

School officials named in the complaint have referred reporters to school spokeswoman Lisa Akchin, who has said UMBC is not responding in detail amid the pending litigation.

“They told me everything’s going through Lisa,” said Dillon, approached by The Brew at campus police headquarters.

Outside the building, “Fire Paul Dillon” fliers had been taped to a nearby smoking shelter on Friday.

By yesterday, the flyers were gone.

The student group’s demands include a call for UMBC to hire an outside consultant to overhaul and implement new sexual assault policies.

The lawsuit alleges “a pattern and practice” by UMBC of misclassifying rape reports as something lesser, masking the school’s poor performance on compliance with the federal Clery Act and depriving victims of justice and safety.

UMBC has been in the spotlight for years a result of a damning investigative report by Buzzfeed News and a 2016 federal investigation (still unresolved) after a complaint by student who said she had been drugged, beaten, bitten and sexually assaulted.

“I have had friends try and pursue Title IX cases and basically get nowhere with them” – UMBC student.

Many in the crowd at yesterday’s protest said they were not surprised by the allegations in the lawsuit of the school’s lack of responsiveness on assault reports.

“I have had friends try and pursue Title IX cases and basically get nowhere with them,” said senior Chylene Babb. “A friend had one three years ago, and it’s still not resolved.”

Babb said she was “very disappointed” to hear allegations like the one in the lawsuit about the university’s policy of destroying “rape kit” evidence under certain circumstances within 30 days.

“That is beyond unacceptable,” Babb said. 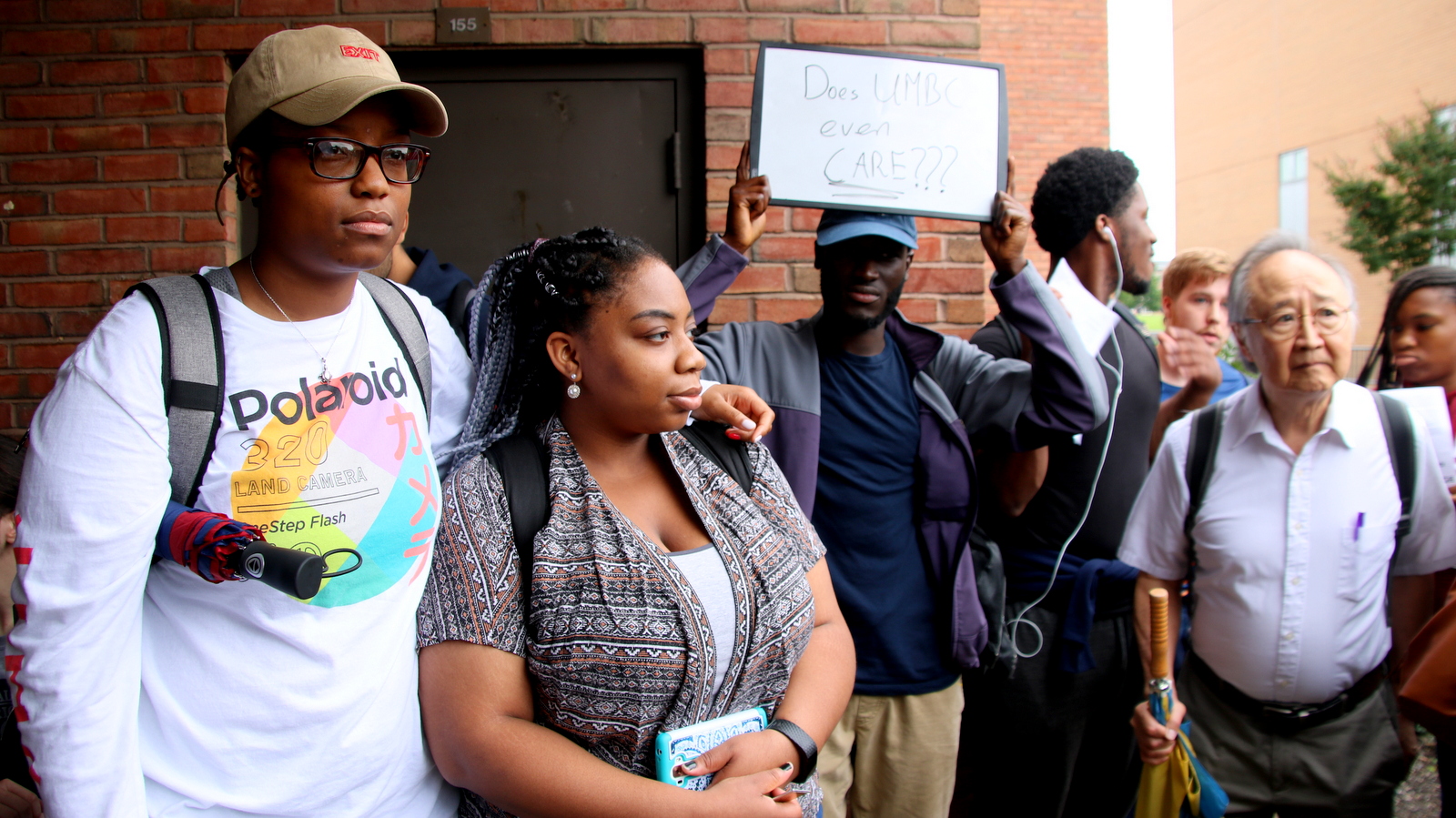 Topia said the central identity of the school as a hub of science and technology education was undermined by the lawsuit, which alleges that UMBC and county officials covered up rape charges against three varsity athletes.

One of the signs at yesterday’s protest said made the same point: “Women in STEM is great – but it doesn’t stop rape.”

“The police are such a heavy presence here. It’s so much ingrained in us to trust the police,” Topia said. “To know that we can’t is just heartbreaking.”