At a September 26 press conference, Pugh touted her Affordable Housing Trust Fund as a “historic measure” that would go a long way to stopping homeless camps from sprouting up around the city and would aid families on the brink of losing their homes.

“You can’t treat people, you can’t help people, unless they have a place to live. And that’s what this commitment is about,” she declared.

The MOU that the mayor signed with three housing advocacy groups would increase the city’s transfer and recordation taxes on property transactions valued at or above $1 million.

The new surcharge would add $7,500 to the cost of a $1 million sale. The revenues would then be deposited in the currently empty Trust Fund to fulfill its stated objective of turning 5,500 vacant or badly deteriorated buildings into units affordable to low-income families and homeless people.

With the City Council ready to approve the measure tonight, attention has focused on last-minute amendments that would potentially diminish the fund’s revenues.

But an even bigger threat to the fund is its own flawed structure. 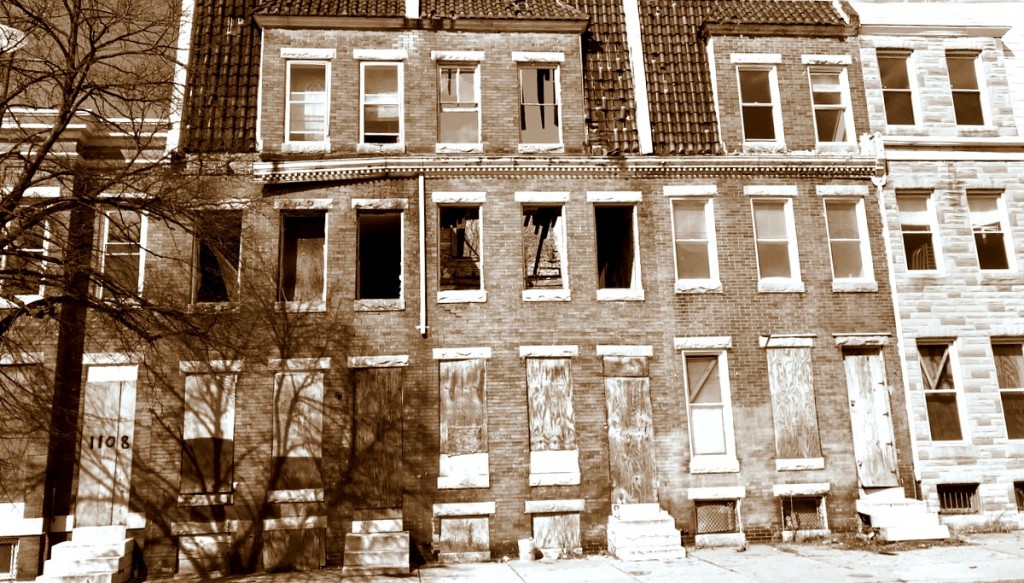 The fine print of the MOU cites an estimated revenue stream from the new taxes of $13 million a year – or 35% below the advertised yield of $20 million for the Trust Fund.

How would the $7 million annual shortfall be met?

The mayor’s office has never really said. Instead, the MOU signed by Pugh and City Council President Bernard C. “Jack” Young on September 18 offered the following:

The CITY will propose to allocate, at a minimum, additional funds to the Affordable Housing Trust Fund either through the annual Ordinance of Estimates or other legislation (City or State) on the following schedule:

Trust fund revenues would not likely reach the promised $20 million mark until 2023.

Even more important than the anticipated shortfall of taxes was this warning by Baltimore’s budget chief, Robert Cenname.

He noted that the city’s existing transfer and recordation taxes (of which the surcharge would be based) are “highly volatile over time and susceptible to changing economic conditions.”

According to Cenname, revenues from the transfer and recordation taxes rose to $117 million during the housing bubble of 2006, then plummeted to $41 million in 2011 after the bubble burst.

Implicit in Cenname’s analysis is this – the revenues anticipated for the Affordable Housing Trust Fund are based both on “no change in market conditions” and “no decline in demand for housing due to the new tax.”

Last week’s stock market sell-off perhaps underscores how volatile the American economy is, not to speak of the widespread belief that Baltimore’s upscale housing market around the harbor has become saturated. 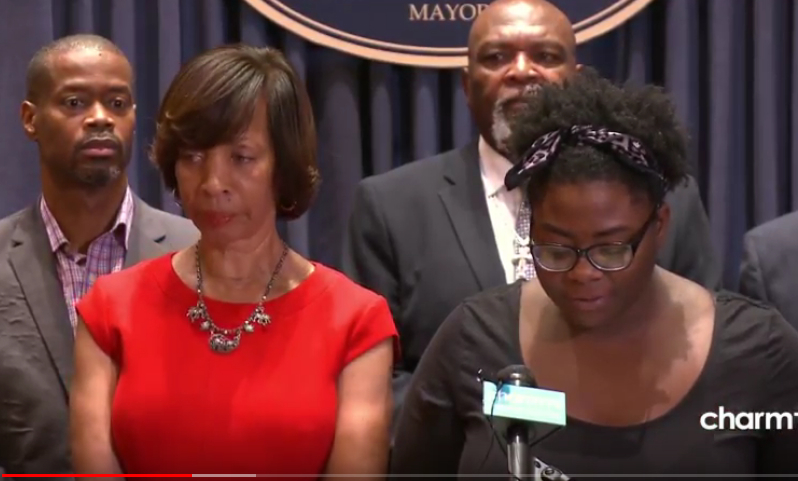 Destiny Watford, of the Baltimore Housing Roundtable, praises Mayor Pugh for signing the MOU at a September 26 press conference. Behind the mayor is Councilman Leon Pinkett and Minister Glenn Smith. (Charm TV)

A Break for Luxury Condos

Adding further uncertainty to the Affordable Housing Trust Fund are amendments that were inserted into the bill by the City Council’s Taxation, Finance and Economic Development Committee.

Those amendments – part of the bill up for a vote at tonight’s Council meeting – would exempt luxury townhouses and condominiums from the tax surcharge for two years, or until January 1, 2021.

City officials privately concede that a major beneficiary of the two-year hiatus is the Paterakis family, owners of the Four Seasons high-rise at Harbor East.

The Four Seasons currently has five condos up for sale, ranging in price from $1 million to $12.5 million. The amendment would likely remove $200,000 or more in prospective revenues from the Trust Fund.

Also tucked into Bill 18-0221 is another amendment that would exempt “in the pipeline” construction loans to developers who obtain a building permit on their property before January 1, 2019.

This could potentially eliminate the tax surcharge on condo sales at the Paterakis family’s Liberty Harbor East under construction on Central Avenue as well as Kevin Plank’s Port Covington, an earlier recipient of $660 million in tax increment (TIF) tax breaks. 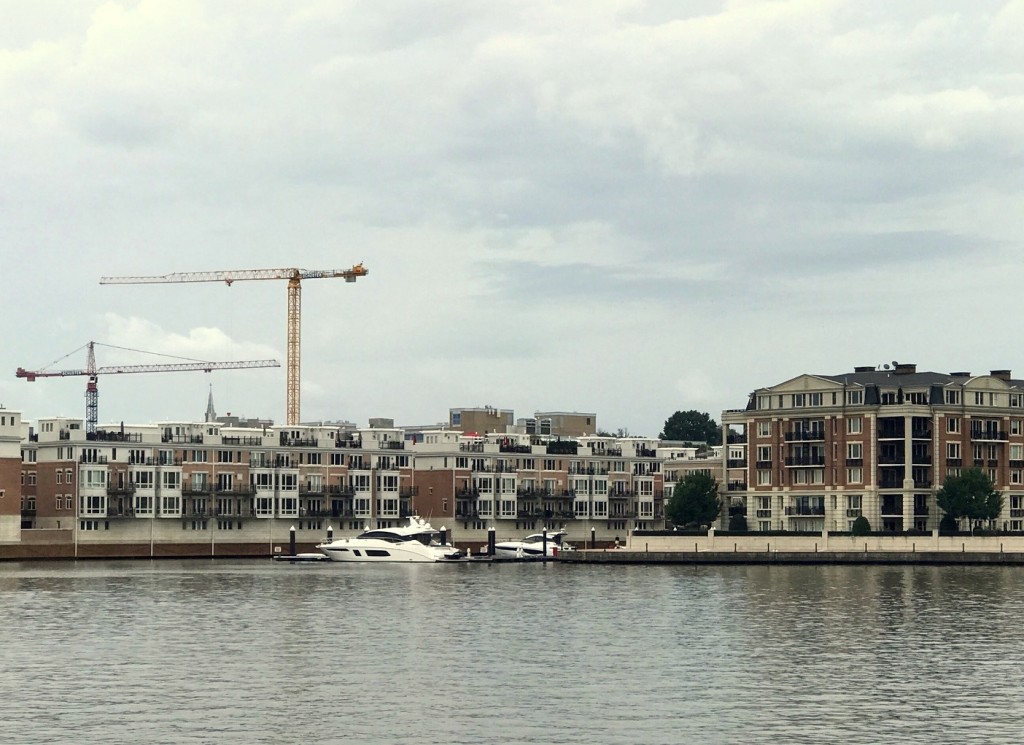 High-end property at the Ritz Carlton development in South Baltimore would benefit from an amendment that critics say will deprive the Affordable Housing Trust Fund of much-needed start-up money. (Mark Reutter)

Peter Sabonis, an economist for the Baltimore Housing Roundtable, one of the signatories of the MOU, estimated the exemptions could cost the fund as much as $10 million a year.

Sabonis’ estimate was the centerpiece of a fiery press release issued last Thursday by the Housing Roundtable, United Workers and Housing For All Coalition that called on the City Council to reject the construction loan and Paterakis condo loopholes.

The city’s estimate appears to have satisfied, or at least quieted, housing advocates who have been notably silent since Thursday’s press release.

The Pugh administration countered with its own estimate on Friday – the new exemptions, it said, would cost the trust fund no more than $1.15 million a year.

This was happy news for the 15 members of the City Council, who all say they are in favor of the Trust Fund, and would hate to come under attack by housing advocates at tonight’s meeting.

The city’s estimate also appears to have satisfied, or at least quieted, the housing advocates, who have been notably silent since Thursday’s press release.

The amendments to the bill came courtesy of Eric Costello, the councilman who represents the South Baltimore and Inner Harbor districts where housing development is currently thriving.

As of last night, the amendments had not been published in the Council’s official record. Here is a key passage obtained by The Brew: 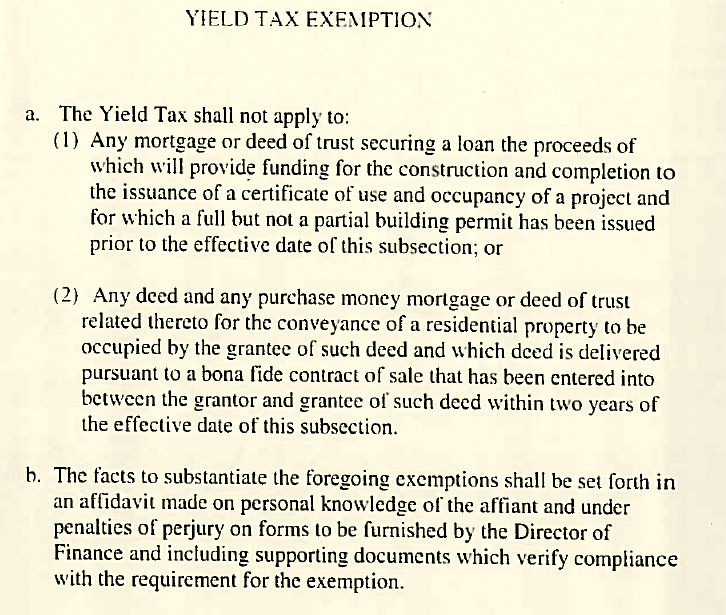 Like the Pugh administration, Costello has insisted to his colleagues that the amendments would have minimal impact on the Trust Fund over time. He did not respond to questions from The Brew about the amendments. 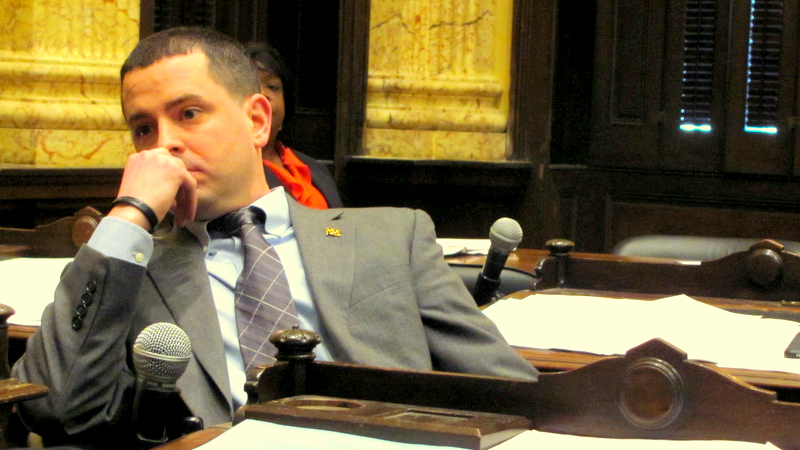 At the mayor’s press conference, Braverman effusively praised the Trust Fund, offering “thanks to all of the advocates for all of the work that they have done and we have done to get to this moment, which is a great moment on the path forward for affordable housing in Baltimore City.”

Then, the following day, Braverman floated the two-year tax exemption before the Taxation Committee.

Earlier this year, the Housing Roundtable and other advocates implored Mayor Pugh to allocate an unexpected surplus in the city’s budget to jumpstart the Trust Fund.

The mayor instead allocated the $21 million in surplus revenues to pay for police overtime.