For the last two years, members of the Baltimore City Council have been grousing about the high cost of the shift schedule adopted by the Police Department, while maintaining that they lack the power to do anything about it.

Finally, a member of the Council acknowledged last week that they can do something about it.

Councilman Ryan Dorsey’s admission in a Twitter exchange (see below) proves that it is not an absence of legal authority, but rather a lack of political will that prevents Baltimore’s elected officials from solving this enormous drag on the city’s resources.

Former Police Commissioner Anthony Batts claimed the change would put more officers on the streets at the most needed times, cut overtime spending and give officers more time off.

The change boomeranged into a costly failure mainly because the BPD has been unable to recruit and retain enough officers to fill assignments under the 4×10 schedule.

The Rawlings-Blake administration then compounded the error by agreeing to hardwire the 4×10 schedule into the collective bargaining agreement between the city and Lodge 3 of the Fraternal Order of Police (FOP), which represents officers in the rank of lieutenant and below.

Most critically, the contract took away the ability of the police commissioner to adjust the schedules of officers to accommodate changing demands on the department.

The 4×10 schedule has meant millions of dollars in overtime, adding to the excessive overtime that has characterized the department in recent years. To date, the FOP has not agreed to an alternative schedule.

While quick to blame Batts and the FOP for the problem, Council members have refused to accept responsibility for fixing it.

But there has been some progress in that regard. Councilman Dorsey’s admission (couched in rather obscure syntax) that the City Council can enact legislation removing shift schedules from the scope of collective bargaining is an important step toward clarity on this matter. 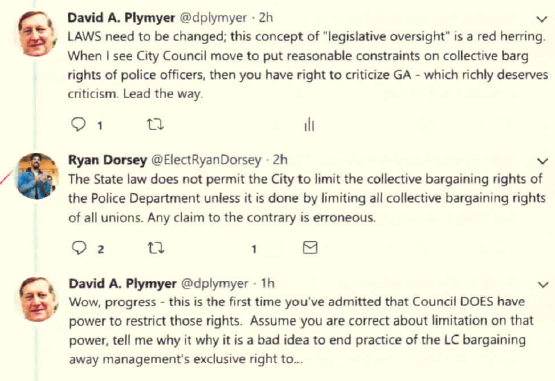 The Twitter exchange last week (October 11) between Councilman Dorsey and the author of this oped.

The legislation referred to by Dorsey would have the effect of giving the Police Commissioner authority to schedule shifts in the manner that best suits the need of the department. The Councilman apparently has been told by city lawyers, however, that such legislation could not apply to only one union.

He then said he was reluctant to introduce such legislation because he supports the rights of city unions “to represent their workers’ conditions.” He then added this:

“As much as I think FOP has been allowed to run amok, it’s not the fault of all workers. It’s a manifestation of weak political will and the FOP acting like a protection racket.”

The admission by the vice chair of the City Council’s Public Safety Committee sheds light on the real reason why the city has not extricated itself from the costly shift schedule:

Namely, a refusal by the Council to do anything that upsets the labor unions that represent city employees – or at least labor unions other than the FOP.

Governance involves choices. Dorsey and like-minded members of the Council have chosen the interests of city labor unions over the safety and financial well-being of the city.

Dorsey’s admission was a long time coming. What follows is the backstory about the lengths to which politicians will go to disavow responsibility for a politically unpleasant task.

Getting to the Truth

My first discussion on the 4×10 shift issue was with Brandon M. Scott, currently the chairman of the Public Safety Committee.

His voice has been the loudest about the body’s “lack of control” over the BPD and the purported need for Gov. Larry Hogan to return control of the department to the city.

After an exchange with Scott on Twitter in April 2017, I had a telephone conversation with him. I said that, if it wished, the Council could remove the subject of shift schedules from the scope of collective bargaining. Scott did not agree with me, and our discussions ended.

In June 2017, Council President Jack Young wrote a letter to the editor of the Baltimore Sun excoriating the FOP for refusing to agree to go back to the 5×8 shift schedule.

Young went so far as to imply that the FOP’s refusal to concede on the issue was partially responsible for the city’s spike in violent crime.

While I am no big fan of the FOP, Young had no right to tell the FOP what its bargaining position should be, especially when the 4×10 schedule was the city’s idea, not the FOP’s.

I sent a letter dated June 29, 2017 to Young and other members of the Council describing their legal options – options that I suspect their own lawyers had already explained to them. Here are the relevant parts of that letter:

State law limits binding arbitration to matters of ‘direct compensation’ and §16-8A(b)(3) of the Code of Public Local Laws of Baltimore City explicitly provides that issues regarding deployment and scheduling are not “direct compensation” issues. “Direct compensation” is defined to mean “wages, salaries, longevity, shift differential [pay], bonuses if applicable, and leave with monetary value.”

Nothing came of that letter. The next member of the Council to lash out at the FOP was Dorsey.

In April 2018, he denounced the union for its continuing refusal to agree to abandon the 4×10 shift schedule, while also describing the BPD as “really just occupying mercenaries.” He dismissed my arguments that he and his colleagues could intervene by tweeting that “City Council is in no way part of collective bargaining.”

This time I responded with an op-ed in the Sun, making public the explanation of the law that I had provided to the Council a year earlier.

Whether that did the trick, I don’t know, but six months later Dorsey is now admitting that City Council has the authority to place limits on the scope of collective bargaining.

Baltimore’s labor and police commissioners never should have bargained away the commissioner’s authority to adjust shift schedules to accommodate the changing needs of the city. Nor should they have hard-wired a specific shift schedule into a labor contract.

But done is done, and the subject of shift schedules is now a subject of collective bargaining, at least until the City Council legislates otherwise.

There is nothing unusual about a legislative body having to clean up a mess created by the executive branch in the course of interpreting and administering a law. The City Council is, after all, the primary policymaker for Baltimore.

If the Council doesn’t want the city to have to negotiate with the FOP over shift schedules, then the Council should do something about it by passing an ordinance.

(Of course, Mayor Catherine Pugh could take it on herself to propose such an ordinance, but she has so far shown no more appetite to take on city employee unions than have members of the Council.)

The fact that the ordinance would have to apply to other city agencies and unions is not an obstacle.

Making it an exclusive management right to decide on appropriate shift schedules is a common and fair allocation of power between management and labor.

Namely, that management decides on the shift schedule that best meets the needs of the organization, and then it negotiates with unions on how to compensate employees for working that shift schedule.

This is not “union busting.” This is the city regaining a reasonable measure of control over governmental operations.

It is especially important for the head of a public safety agency to be able to adjust shift schedules. If a shift schedule must be changed during the term of a labor contract, a “re-opener” clause in the contract can allow the negotiation of the accompanying changes in compensation.

This is not “union busting,” as Councilman Dorsey implies. This is the city regaining a reasonable measure of control over governmental operations.

The problems caused by the 4×10 shift schedule should (but likely will not) get resolved any time soon.

But, at least, we can be spared from the spectacle of elected officials proclaiming their “helplessness” in resolving ballooning police overtime and the poor deployment of officers in this time of public angst about crime.
_________________________
David A. Plymyer retired as Anne Arundel County Attorney after 31 years in its office of law. His work included advising county management on the content and negotiation of contracts with public safety unions.