It was 7:45 a.m. on Thursday, and the mayor was due to arrive any minute at the 1100 block of North Carey Street, where a 52-year-old man had been fatally shot two days before.

A spray of violence has riddled the city’s murder map lately, particularly in West Baltimore, but it’s been this way in Sandtown-Winchester for a long time.

A memorial photo for a local 19-year-old shot last year –  showing him displaying bundles of cash – hung on the fence of the old abandoned Pinderhughes school, now used as a homeless shelter.

There were messages to “Young Money” scrawled on  it. “I love you, nephew. Aunt Vicky.”  “Your godmother. Truly in disbelief.”

It had been a bad week for Baltimore.

Seven people killed, almost all on the west side. Eleven people were shot on Tuesday alone, including the fatality on Carey Street and two other deaths, one of them part of a triple shooting on nearby Pennsylvania Avenue. 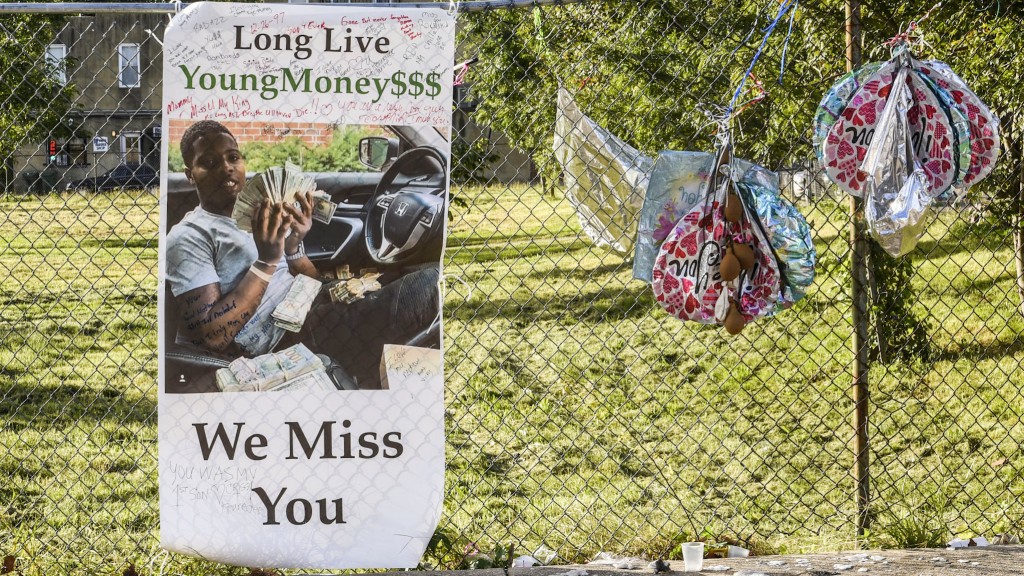 A memorial to “Young Money,” another victim of the west side’s plague of homicides. (J.M. Giordano)

This is Sandtown-Winchester, briefly in the national media spotlight after the fatal apprehension of Freddie Gray by police in 2015. Three years later, residents carry on in a landscape pockmarked with the signs of continuing decay and neglect.

Over the summer, a rash of fires broke out in the vacant rowhouses here.

On Winchester Street, one of those vacants collapsed two months ago and was demolished, leaving behind a crater-like depression – the building’s former basement. Since then, residents complain, “The Hole” has become a trash-filled haven for addicts and drug traffickers.

What message, a passerby was asked, would you have for Mayor Catherine Pugh?

“I have a message for God,” the woman said, “to please calm His earth down.” 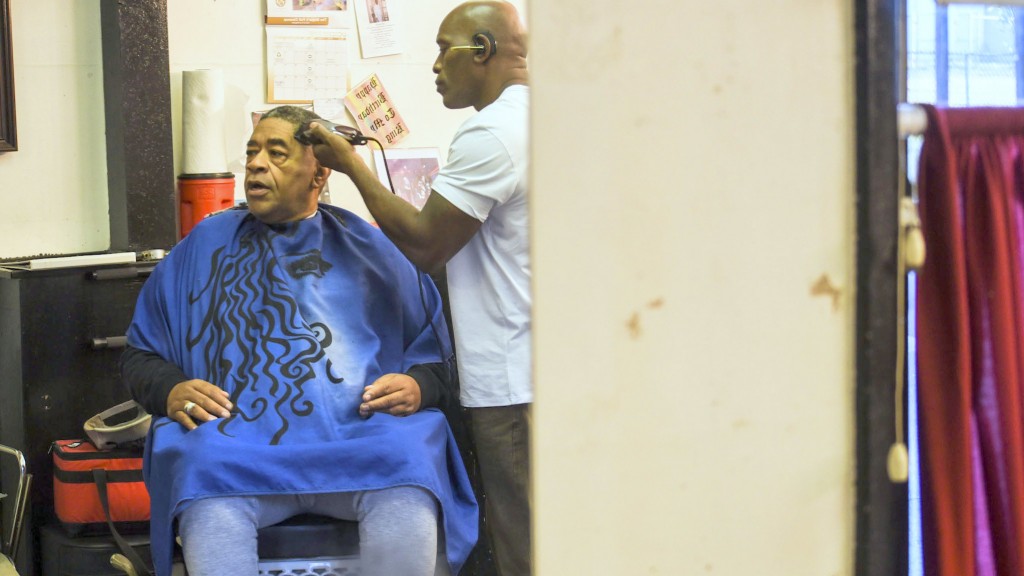 Rev. C.W. Harris talks in the barber chair about what needs to be addressed in Sandtown-Winchester. (J.M. Giordano)

The Rev. C.W. Harris had a slightly different take, delivered as he sat for a haircut at the neat-as-a-pin People’s Barber Shop, an early-morning oasis in the neighborhood, its “OPEN” sign on and its barber pole spinning.

“This is the United States of America. It’s where no one should live like this!” said the longtime activist and community leader. “We’re locked up in our own homes because of the killings.”

Treating drug addiction as a medical problem instead of a criminal justice issue (“like Mayor Schmoke said”) is the only long-term way to stem the bloodshed, he observed.

When the mayoral entourage finally rolled up – with acting Police Commissioner Gary Tuggle, an army of police brass, and representatives of the Liquor Board and various city agencies – Pugh shook the hand of one of the first citizens on the scene, BMORENEWS.com founder Doni Glover.

“Doni, how are you today?” the mayor asked, smiling. 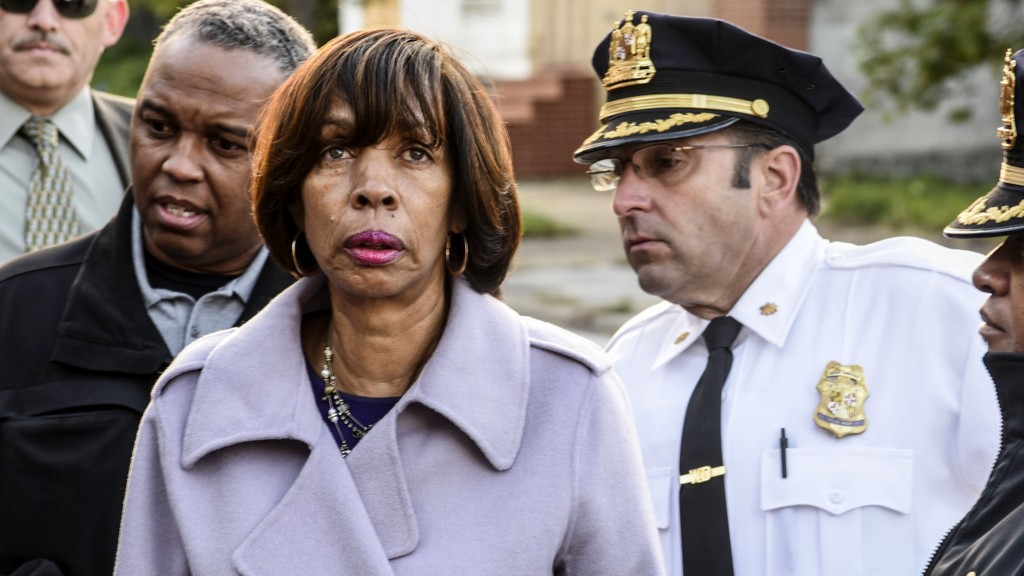 Homicide was Right There

Pugh’s walk-through began at the intersection of Carey and Riggs Avenue, where a huge swath of trash on the sidewalk and roadway caught her eye.

“This doesn’t get on the ground by itself,” she pointed out.

“No, ma’am,” replied her guide, Major John Webb, commander of the Western District.

“Is this every day?” she asked, wrinkling her nose.

“You got your high weeds and grass trapping, everything,” he observed.

Webb pointed out the decrepitude of the block’s vacants, how one house was “snapping and bowing out,” how “just yesterday we were watching them where they’re running into the alleys and using the vacants for their narcotics.”

“The homicide was right there in that area where the blue van is,” he told the mayor almost parenthetically.

Turning the corner into the alley, the mayor and her entourage could see the even-more-deteriorated backs of the rowhouses – roofs all but gone and mature vines and trees shooting up through what were once kitchens and bedrooms. 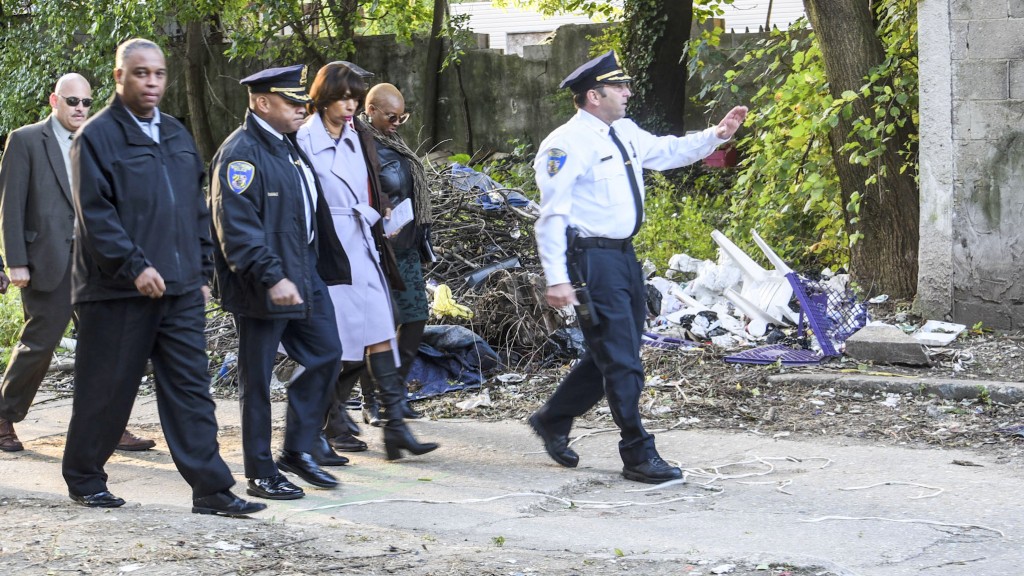 Mayor Pugh tours a neighborhood that suffers from decades of neglect. (J.M. Giordano) 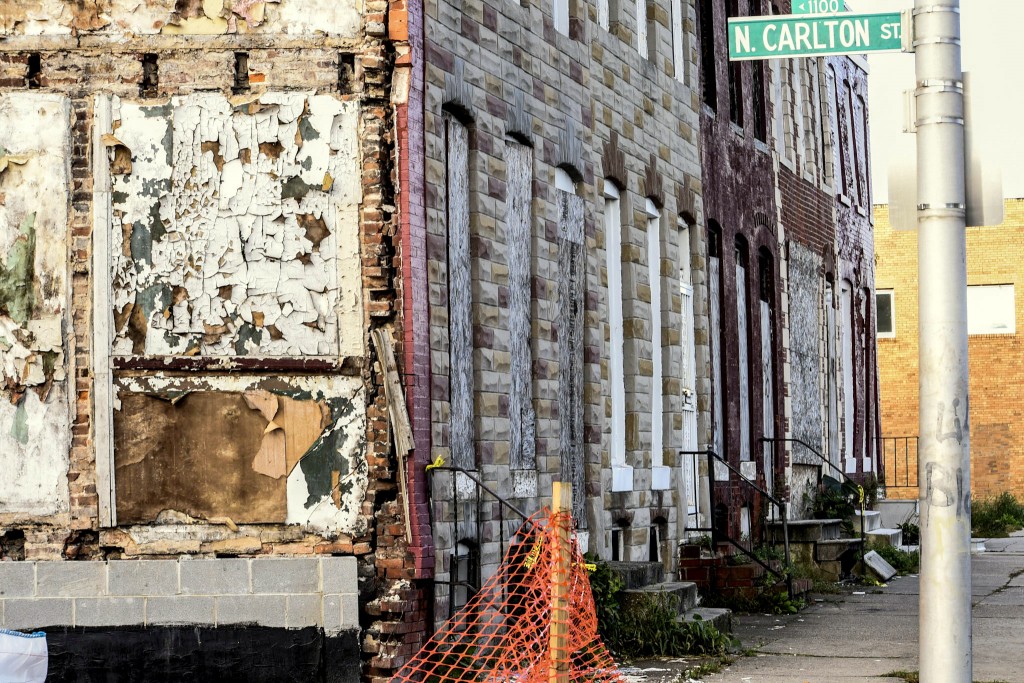 The site of a rowhouse collapse that created a trash-filled depression that residents call  “The Hole.” (J.M. Giordano.)

Pugh questioned officials closely on whether these structures were scheduled for demolition and how quickly that could happen. She wondered whether some were still occupied.

On another issue, a staffer piped up, “We’re working with four or five youth who are looking for jobs.”

The officials picked their way through the alley past shards of glass and twisted metal, over broken pavement and foot-deep potholes.

They carefully stepped around an old couch and other discarded furniture that one tour participant said people drag into the alley to slow down police trying to catch them when they flee.

What You Should Know

“This is ‘The Hole.’ Right here,” said Glover, when they came to the pit he has been pleading with city officials to fill.

“My fear is this is just going to become a landfill,” he said, as Pugh peered into it.

As a longtime Sandtown resident, Glover has become increasingly distraught over the growth of the drug trade there.

Asked later why she had come to the neighborhood, Pugh pointed out that it was her 32nd such community walk-though.

“What you-all should know is that we do this every week,” she said. 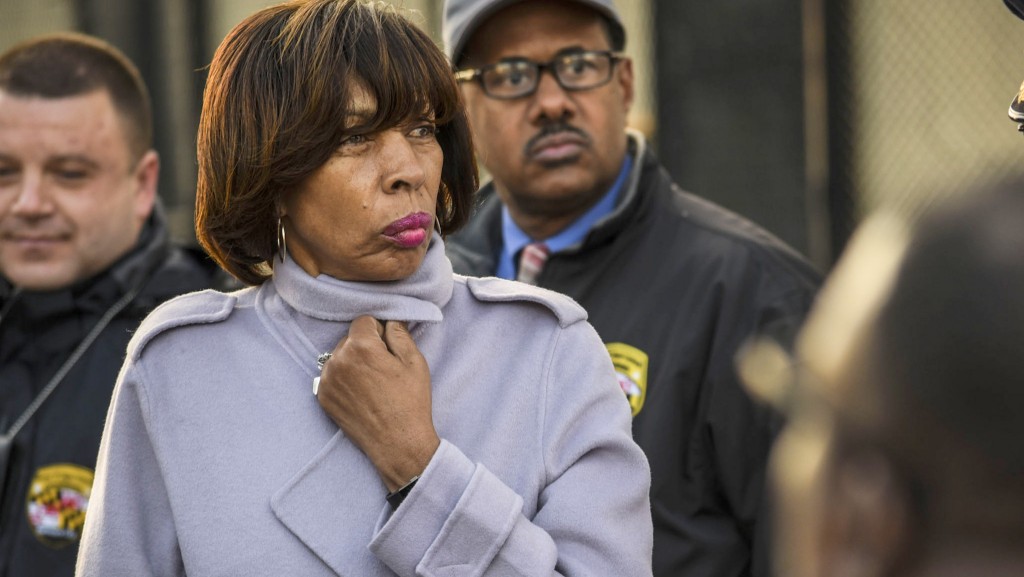 Pugh said her visit to Carey Street and the surrounding neighborhood was planned earlier and not scheduled because of the fatal shooting. (J.M. Giordano)

Faced with the nation’s highest big-city homicide rate last year and 253 homicides already this year, Pugh has been regularly pulling together representatives a wide swath of city government in what she calls her Violence Reduction Initiative.

Participants from different agencies and departments share information with police on blight, tall grass, nuisance liquor stores and taverns, homeless encampments, broken streetlights and other issues that could contribute to city violence.

Her walk in Sandtown was part of that initiative. “Something we had planned to do because we have been walking in and around this area after we’ve been in this area a couple times,” she said.

Being just steps away from where a man was gunned down two days earlier, she was asked how her walk-through related to the violence that has unnerved the whole city.

“We’re here because there were some concerns about, you know, the area itself whether it’s crime or what have you,” she replied.

“Our violence reduction initiative is all about reducing violence in our city. This is something we’ve been doing now since November 2017.

“You-all may be just finding out about it but this is what we’ve been doing. We come out to communities sometimes early in the morning and sometimes at 4 in the afternoon and sometimes 8 in the evening.” 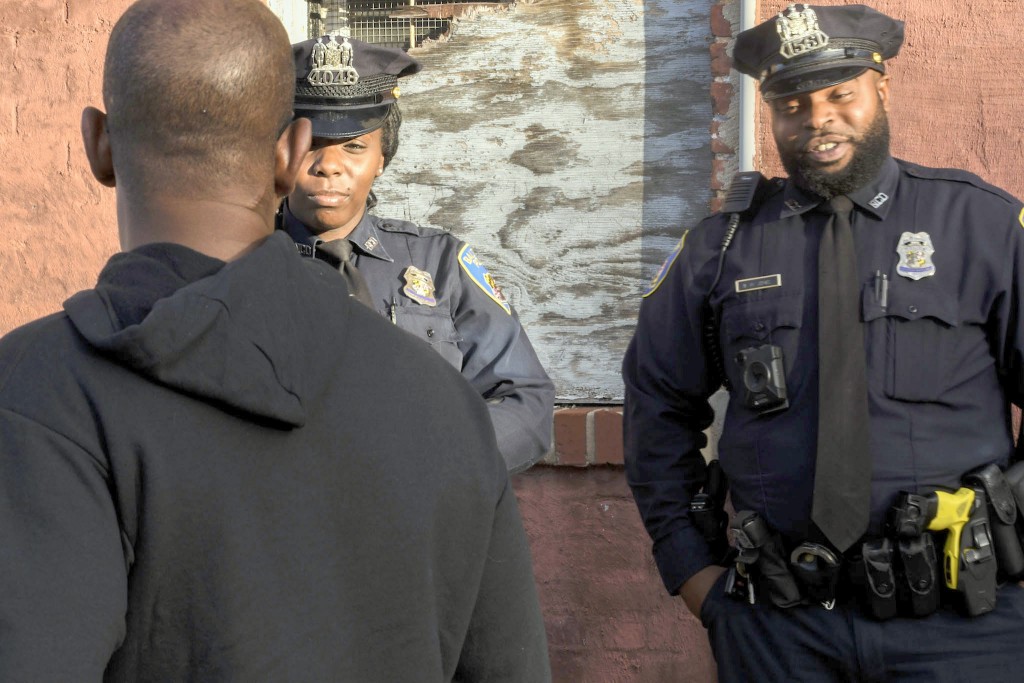 Baltimore Police and residents walked the back alleys and byways of Sandtown-Winchester. (J.M. Giordano)

After departing, Pugh returned to her other mayoral duties, among them announcing a new permanent police commissioner by the end of the month. (The city has been without one since May when Darryl De Sousa resigned amid federal tax charges.)

“I give her credit,” Glover said. “She came here. She went down in The Hole.”

Glover, for his part, reflected on the mayor’s visit to his side of town.

“I give her credit,” he mused. “She came here. She went down in The Hole. I appreciated that.

“We’ll wait and see what happens,” he added.

There was no waiting for Riggs Avenue residents. Pugh’s big black SUV was barely out of sight when green Department of Public Works trucks rolled up.

Brandishing rakes, brooms and shovels, workers set about cleaning up the trash that had so irritated the mayor. 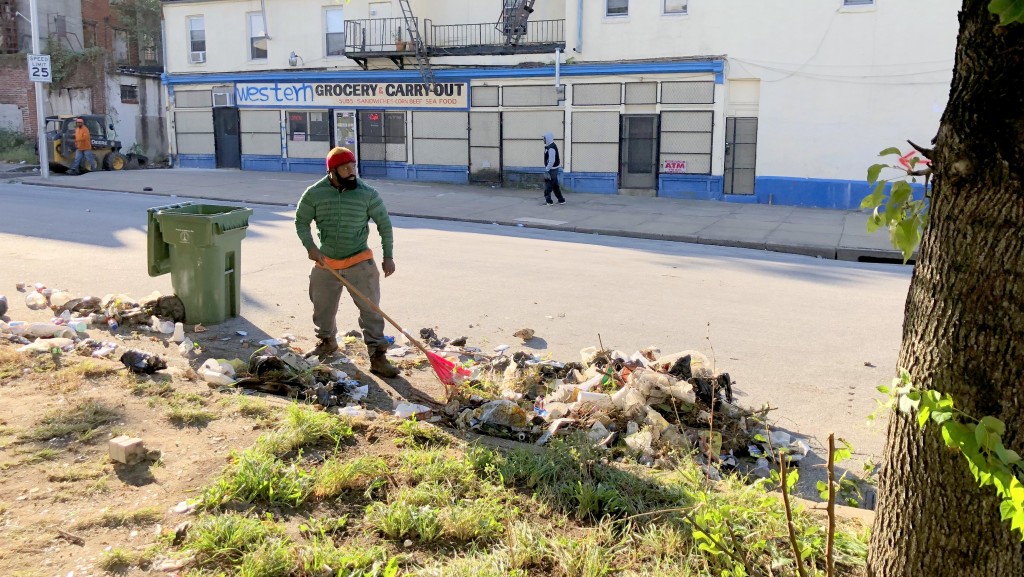 After the mayor left, public works crews clear away away some of the trash littering Sandtown. (Fern Shen)

An employee on a riding mower trimmed the grass in front of a mural that said, “Faith Without Works is Dead.”

One member of the clean-up crew called out:

“Get a picture of us. We get kind of overlooked. But, you know, sometimes we’re the one really doing the work in this city.” 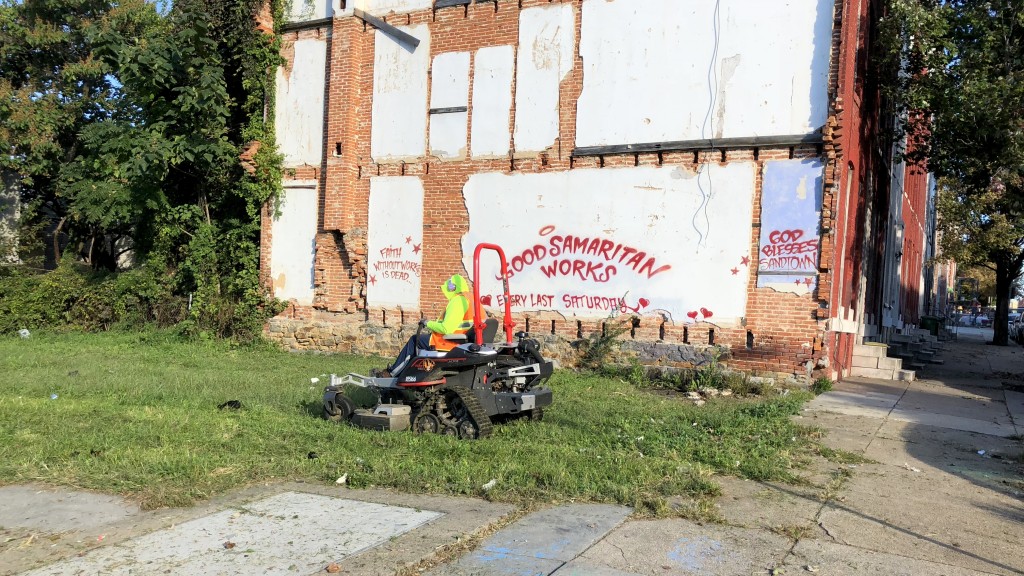