City officials today confirmed a Brew report that there are two walls in the 200 block of East 26th Street that separate the CSX railway from the street, and it was the upper wall – owned by the city – that failed on Monday.

Officials also responded to questions about whether a contractor working for the Department of Public Works may have inadvertently help trigger that failure, which suddenly caused a half-block of sidewalk to tilt sharply down towards the rail line.

“We have no reason to believe” that a water main installed a few feet from the compromised wall was responsible or contributed to its partial collapse, said Jeffrey Raymond, a spokesman for DPW.

The water line was dug about five feet below the street and runs parallel to the failed wall between Calvert Street and Guilford Avenue.

The 8-inch pipe was installed by Monumental Paving & Excavating and was put in service last July, according to Raymond.

Water through the line was stopped on Monday after city officials, notified by local residents, witnessed the separation of the sidewalk from the street and the upper wall shifting and buckling outward towards the CSX line.

Raymond said tests on the pipe, as well as on nearby sewer lines and storm drains, indicated no leakage that may have saturated the subsurface and weakened the wall – as had been privately speculated by some personnel at the scene. 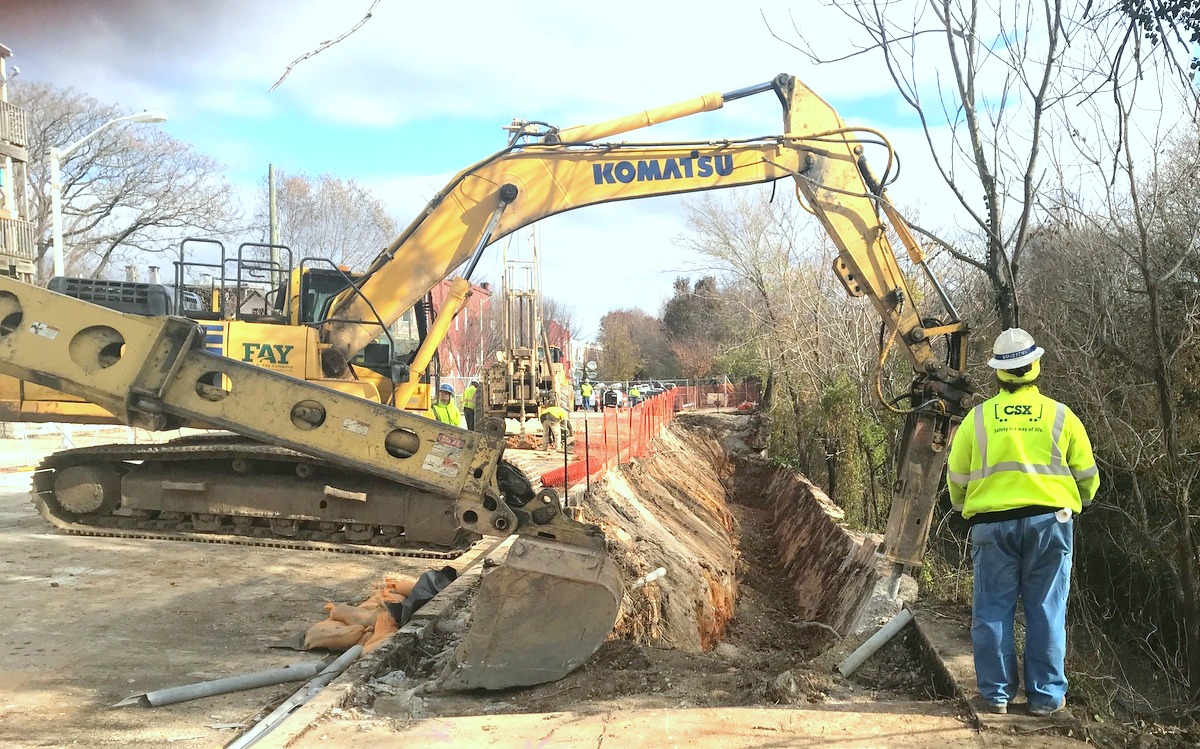 An excavator is stationed above a recently installed water line that ran alongside the concrete retaining wall. DPW says it “has no reason to believe” that the construction or operation of the line compromised the wall. (Mark Reutter)

Heavy rains swept through Baltimore as the wall bulged and buckled on Monday. But unlike a nearby incident in 2014 when a broad swath of 26th Street slid dramatically into the railway cut, the upper wall held.

DOT spokesman German Vigil said the agency was still trying to determine the exact boundaries that separate the CSX line from city property.

After the 2014 landslide, the Rawlings-Blake administration announced various measures to insure that a similar incident would not occur in the future.

They included the hiring of consultants to conduct “precautionary structural inspections” along CSX’s right-of-way through Charles Village with the goal of “prioritizing areas of concern within the next 12 months.”

Vigil said today he was unable to locate information on the consultants’ report or determine if any action was taken to identify and repair compromised infrastructure along 26th Street.

Spokesmen for DOT and DPW said they had no knowledge of an Emergency Infrastructure Fund promised by the Rawlings-Blake administration.

Separate from the 2014 report, the Sisson Street Bridge over CSX has been identified by DOT as failing and requiring replacement.

With plans in the works for nearly a decade, DOT says it hopes to start construction of a new bridge by the end of 2019.

One of the conclusions of the earlier report was that DOT and DPW did not use licensed engineers to examine the wall at 26th and Charles streets after citizens complained that the roadway was buckling.

Instead, visual examinations were conducted that turned up no imminent dangers before the April 30, 2014 collapse.

DOT had eventually planned to rebuild the roadway, but said it could not afford the estimated price tag of $350,000.

After the wall tumbled down, about $18 million was spent to build a replacement wall and to compensate residents on 26th Street temporarily displaced by the collapse.

On August 15, 2014, DPW director Rudy Chow signed a memorandum with then-DOT director William Johnson calling for the establishment of an “Emergency Infrastructure Fund” for inspections and temporary repairs of infrastructure along the CSX route.

Today, agency spokesmen said they had no knowledge whether the Emergency Fund was ever established.

Raymond noted that DPW does set aside money for emergency repairs through its water and sewer enterprise budgets. He said it was too early to estimate the cost of the latest wall failure.

While the city and CSX are jointly handling repairs, it has not been determined who (Baltimore City, the railway company or both) would pay for the new wall, Laura Phelps, a CSX spokesperson, said.