A local utility contractor was ordered by a federal judge on Friday to pay $100,000 in fines for his role in extorting bribes from area businessmen in return for waiving “street cut” fines.

Jerome W. Stephens, owner of A&A Construction and Utilities, had pleaded guilty to conspiring with Daryl Christopher Wade, an ex-Department of Transportation supervisor, to extort bribes “under color of official right” from business owners throughout Baltimore, according to the U.S. attorney’s office.

Wade used his position as construction supervisor at DOT to reduce or erase fines for expired street cut permits in return for cash payments.

Last month, 51-year-old Wade was sentenced by U.S. District Judge Catherine Blake to 15 months in prison, followed by three years of supervised release. He is set to report to federal prison at Fort Dix, N.J., in January.

In his plea deal, Wade admitted that he had accepted multiple cash payments, including from Stephens, between 2012 and 2016 when he was a city employee.

Wade is the son of Bob Wade, the NFL defensive back who famously coached Dunbar High School’s championship basketball team. The younger Wade had coached the football and boys basketball teams at City College.

“We in Cahoots Now”

According to federal prosecutors, Wade received bribes totaling $7,900. In addition, he sought, with Stephens’ help, to extort $52,000 from a Virginia-based contractor doing $55 million of business under the city’s sewer consent decree with the Environmental Protection Agency.

The attempt to steamroll the contractor into paying the bribe – under the false assertion that he would otherwise be subject to $1.3 million in street cut fines – led to their downfall.

The unnamed contractor became a government informant, and authorities were able to link Stephens, who had approached the contractor, with Wade.

The FBI then recruited a Baltimore plumbing contractor, who himself faced potential criminal charges, as a second informant.

This informant told authorities that Wade had pulled him aside after a DOT administrative hearing and said he could make a $17,000 street cut fine go away.

“What is it worth to you?” Wade asked.

The men agreed on a $5,000 bribe. Wade collected the first installment in a city-owned vehicle, ordering the informant to throw $3,000 in cash in the back of the vehicle.

“We in cahoots now,” he said, according to the criminal complaint and plea deal.

That employee has not been identified. 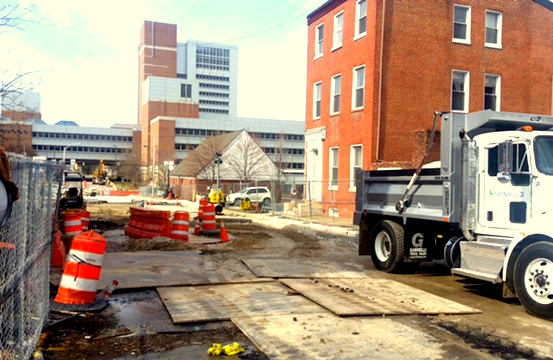 Another bribery scheme was hatched in July 2016 at the instigation of Stephens, who had been hired by a restaurant owner to install a new water pipe to the city’s underground line.

Stephens informed the restaurateur that he would have to repave the entire street from curb to curb. However, if he was willing to pay “my city connection,” he’d only have to complete two six-by-six-foot patches, saving at least $10,000.

The owner took the bait, paying Stephens $2,200, which Stephens gave to Wade. After Stephens finished the patch work, Wade drove to the site and pretended to make an inspection.

Afterwards, he texted Stephens that one of the patches was fine, but the other one was “shitty. . . like a 7 yr old did them.”

After serving his 15-month sentence at Fort Dix, he is required to complete 100 hours of community service during his three years of probation.

In addition to a $100,000 fine, Stephens was sentenced to six months in community confinement, six months in home detention and also ordered to perform 100 hours of community service.