As a result of these allowances, De Sousa was able to greatly reduce the taxes taken out of his police paycheck, setting the stage for his later failure, while a rising star at the BPD, to file any tax returns.

On Tuesday, the 54-year-old pleaded guilty to three counts of failure to file individual federal tax returns, a crime punishable by up to three years in prison and $300,000 in fines.

De Sousa, Baltimore’s top cop for four months before he was slapped with tax charges last May, admitted that he owed $67,587.72 in back taxes to the IRS and the State of Maryland.

How He Did It

Two examples of his approach to tax cheating could be found in his 2008 and 2012 returns.

By late 2015 and early 2016, after De Sousa had been elevated to the ranks of colonel and then deputy commissioner, BPD had knowledge that something wasn’t right about his taxes.

In 2008, he claimed $10,562 in home mortgage interest and $4,652 in local property taxes, although he did not own any real estate or have a mortgage. (At the time, he was deputy commander of the Northeastern Police District and living in an apartment in Owings Mills.)

In fact, he did not have any legitimate expenses that the BPD did not reimburse. But by virtue of his raft of bogus expenses, De Sousa claimed a tax bill of $9,936 “when his total tax owed should have been $15,486,” according to the plea stipulation.

On the other end of the taxpaying process, because of all of the allowances he claimed on his W-4 form, the BPD withheld only $8,819 in federal taxes from his wages in 2012, requiring him to pay a small difference on his filed tax return.

From Evasion to Non-Filing

Instead he waited 2½ and 3½ years, respectively, to file the returns.

Soon thereafter, the IRS was on his case, informing him via a “lock-in letter” that he wasn’t entitled to claim “more than a specified number of withholding allowances.” It also pointed out that he owed interest and penalties for his late returns.

The same “lock-in letter” was issued to his employer, instructing the police department not to honor his W-4 form and to disregard any new W-4 forms unless they resulted in additional withholding taxes.

In other words, by late 2015 or early 2016, after De Sousa had been elevated to the ranks of colonel and then deputy commissioner, BPD had knowledge that something wasn’t right about his taxes.

Last May, after he was indicted on tax charges, De Sousa tweeted that the “only explanation” for his not filing the returns was his failure “to sufficiently prioritize my personal finances.”

Yesterday he offered no explanation to Judge Blake in court or to the media waiting outside. 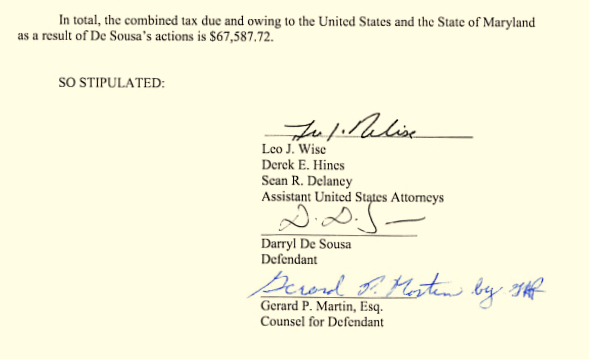