It was thumbs-down Monday night at the Harwood Community Association meeting, capping a bad day for Johns Hopkins University in its quest to win public support for armed police to combat what it calls sustained and “brazen” crime in and around its campuses.

“They’re dangling carrots at us,” said one resident, as neighbors dissected the terms of Hopkins’ proposal.

“So now you can pay to get better police protection in Baltimore?” said another during a meeting that ended with members voting overwhelmingly against the idea.

Earlier in the day, 90 university professors signed an Open Letter denouncing a plan submitted to the Maryland legislature to create a private JHU police force to patrol in and around its Homewood and Peabody Institute campuses in North Baltimore and the sprawling medical complex in East Baltimore.

Currently, Hopkins maintains a 1,107-strong security force. Most of them are unarmed security guards who have no arrest powers. But in the mix are 63 off-duty Baltimore Police officers and deputy sheriffs.

These officers have arrest powers, but do not have access to CAD (computer-aided dispatch) and other resources when responding to 911 emergency calls.

Hopkins now wants state approval for its own department of about 100 armed officers to handle crime fighting both on its property and in the surrounding community, including the “fresh pursuit of a suspected offender” on public streets.

The university would maintain its present levels of unarmed security, with the aim of making the force “a demonstration project on how to do policing right,” Hopkins President Ronald J. Daniels has said.

A poll by the Student Government Association found that 75% of surveyed undergraduates are opposed the legislation. A coalition of campus groups, known as Students Against Private Police (SAPP), have held protests and teach-ins.

They argue that more police aren’t the answer to Baltimore’s crime problems and, instead, will likely increase racial tensions and profiling, which could lead to such incidents as the death of Tyrone West that involved a Morgan State police officer.

Reported Crime at JHU: Outside and Within 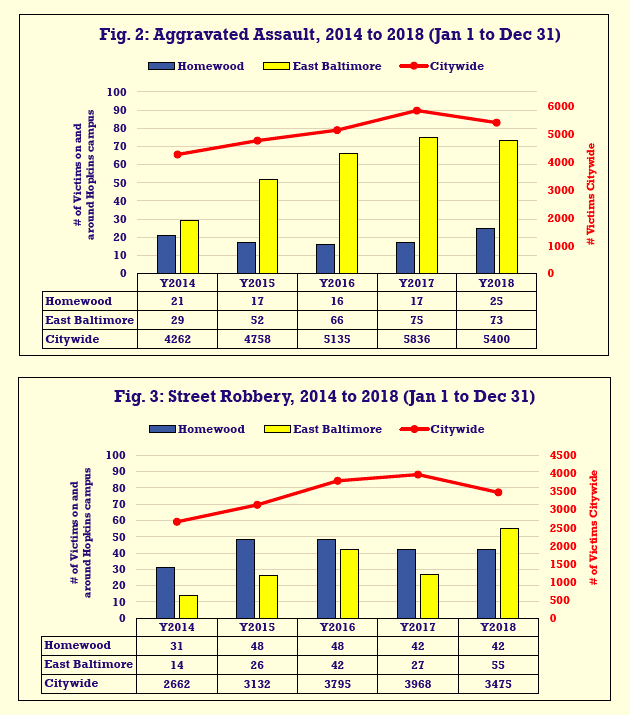 ABOVE: Johns Hopkins released to The Brew these updated statistics of aggravated assaults and street robbery that took place in and around the Homewood and East Baltimore campuses between 2014 and the end of 2018.
BELOW: Many infractions take place within the Homewood campus and student dorms, according to the latest JHU Clery Report, which is required to be filed by universities receiving federal aid. In the fine print of footnotes 1-3, it is disclosed that the Student Counseling Center received 101 confidential reports of sexual assault in 2017, more than triple the 32 complaints received in 2015 and 36 complaints in 2016. 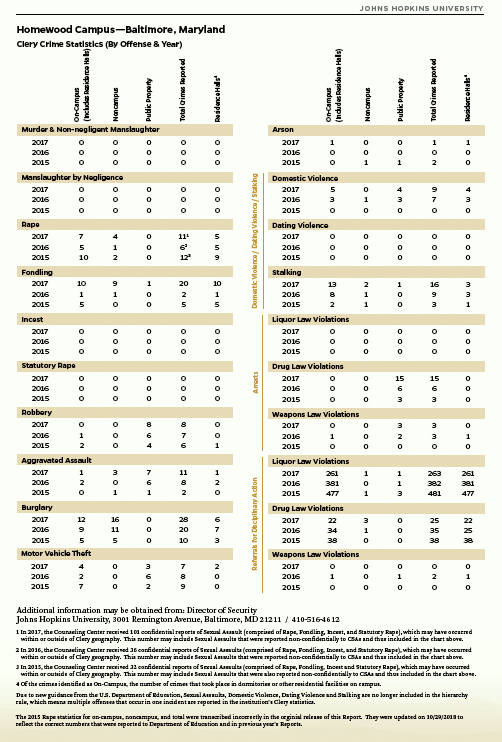 The plan has divided neighborhoods around Homewood, a split based more on income and one’s perceptions about policing than on race (the immediate area is predominately white).

Along the affluent northern perimeter of the campus, the Tuscany-Canterbury Neighborhood Association has welcomed the prospect of armed Hopkins police acting as a deterrent to crime, says Tuscany co-president Anne S. Perkins.

Perkins said the board voted unanimously in favor of the measure after university representatives “answered all of our questions and explained to us how well the officers would be trained in community policing.”

“Unfortunately, crime has become a national descriptor of our city,” he wrote to Del. Maggie McIntosh, noting that his association now hires security guards to provide a watch service for the district’s 800 households.

“We would benefit from additional patrols provided by a Johns Hopkins University police department,” he said, while the city would gain by reducing stress on the 2,400-member Baltimore Police Department. 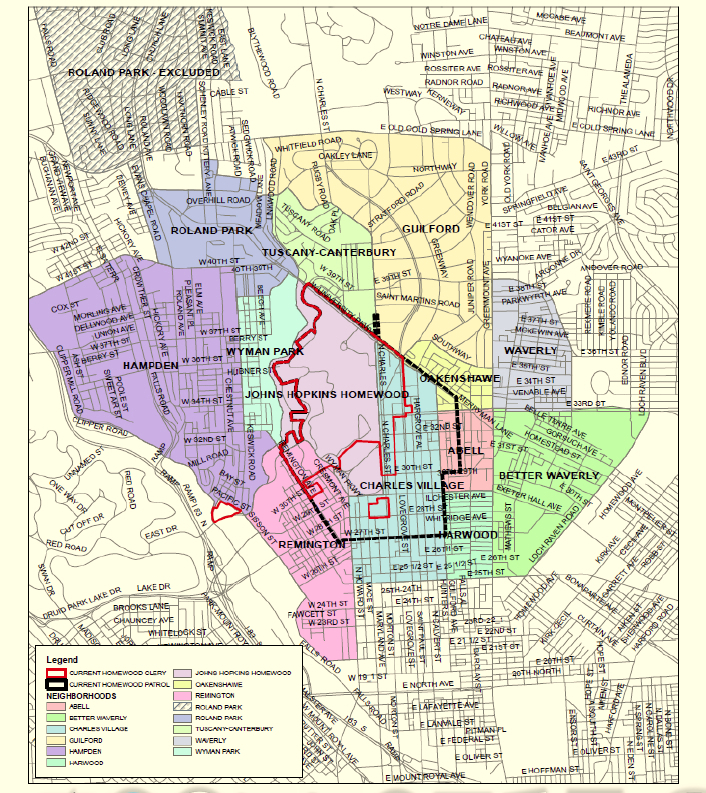 The boundaries of Hopkins-owned property (RED) and the neighborhoods currently being patrolled by Hopkins security (BROKEN BLACK LINE).

In the more modest rowhouse districts east and south of the campus, “privatizing the police” is viewed as a worrisome trend by many.

“The climate of fear in Baltimore is real,” Cross wrote to JHU board chairman Jeffrey Aronson, and “genuine communication and collaboration” is needed to bridge the gap between the university and local residents.

Instead, he warned, the university seeks to “arrogate to itself the state’s monopoly on force and violence. Indeed, there are few things more terrifying than a police force deployed by academics.” 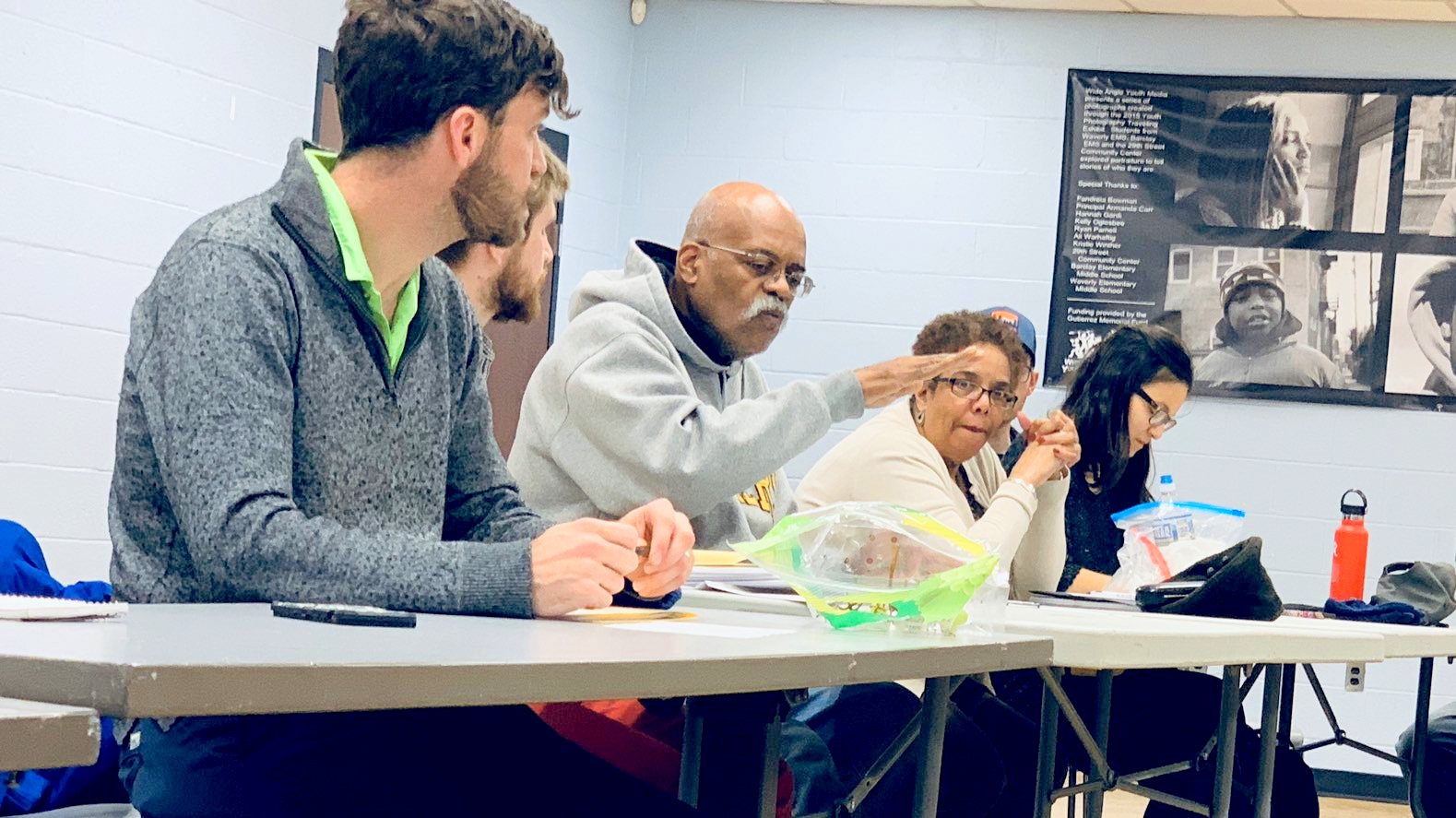 Ralph Moore, who worked with the legendary Johns Hopkins’ chaplain Chester Wickwire, voices opposition to the police plan at the Harwood Community Association meeting. To his left is Yvonne Fisher. (@jkane146)

During the Harwood meeting, residents dissected Senate Bill 793 and its twin, House Bill 1094, and found them wanting.

Rather than reciting statistics issued by Hopkins on increased levels of neighborhood crime, all but one participant in the discussion expressed skepticism and even mistrust of the university’s motives.

“I am respectful of Hopkins, but Hopkins is an island and oversight of these police will become suspect,” said Yvonne Fisher, who has lived in Harwood for the 24 years. “They can say what they want to, but it will be Hopkins who will determine what goes on here. As a community, we don’t have their deep pockets.”

A police accountability board proposed by the legislation would consist of 15 people, 13 of which JHU itself would appoint.

Various speakers described the legislative push as Hopkins’ effort to sell out-of-town parents on the notion that, while Baltimore might be crime ridden, their child would be living in a safe and well-protected environment.

JHU’s negligence in handling Title IX sexual misconduct cases led others to wonder if the police force would act to protect those within the university, while harassing and profiling non-Hopkins juveniles in the community.

“As a plan for violence reduction, this is not a serious conversation,” one opined.

Another person noted that Hopkins police would be working closely with Baltimore Police, which has yet to reform its practices following the Department of Justice’s 2016 investigation and the crime spree exposed by the indictments and federal trial of members of the Gun Trace Task Force.

“I have a black boyfriend, and I don’t want him to be shot.” she said.

Others said the police department would have little accountability, despite the university’s assurances to the contrary. An Accountability Board proposed in the legislation, for example, would consist of 15 people, 13 of which JHU itself would appoint.

“They’re not even requiring the police to be city residents.”

Ten of the members would come from “students, faculty and staff of the university,” three from communities appointed by “university leadership in consultation with the Baltimore City Council,” and two from the mayor and City Council president.

The board would “review,” “share,” “provide feedback” and “suggest ideas” for community-based policing, according to the bills – not set standards, implement policy or investigate complaints.

“They’re not even requiring the police to be city residents,” exclaimed one resident. “They’re giving away too much.”

Members agreed that a 80% threshold would have to be met before the association would announce a consensus on the police bills.

On the first vote, 3 were in favor and 18 against a police force. It was then noted that more votes have been electronically sent in by members, changing the tally.

As the votes were being counted, another resident entered the room and was asked if he favored or opposed the Hopkins legislation.