The Filbert Street Garden’s supporters brought their “A game” to Friday’s meeting about city plans to possibly take their one-acre patch of carefully-tended space in Curtis Bay and use it for a Department of Public Works water pumping station.

They showed photos of children and adults enjoying the garden, located atop a hill in working-class South Baltimore. They walked through a breakdown of the $60,000 that’s been invested in sheds, coops, an irrigation system and more over the past decade.

They brought exhibits – jars of honey from the garden’s 20 hives and a basket of ducklings soon to join the Filbert Street menagerie. They noted that the space accommodates 40 gardeners, while the ducks and chickens produce 4,200 eggs a year.

And they were accompanied by a standing-room-only crowd of about 50 people at the Brooklyn Branch of the Enoch Pratt Library eager to explain why the garden should be off-limits.

“The amount of happiness and community provided by this garden is invaluable – you cannot put a dollar value to it,” said William Castro, prompting cheers.

“I’m so appalled, that’s why I came,” added Mary Whitley, who brought her 10-year-old granddaughter. “To uproot this garden, after all that it’s done to bring people together, would be like telling the citizens of Curtis Bay we don’t care one bit about you.” 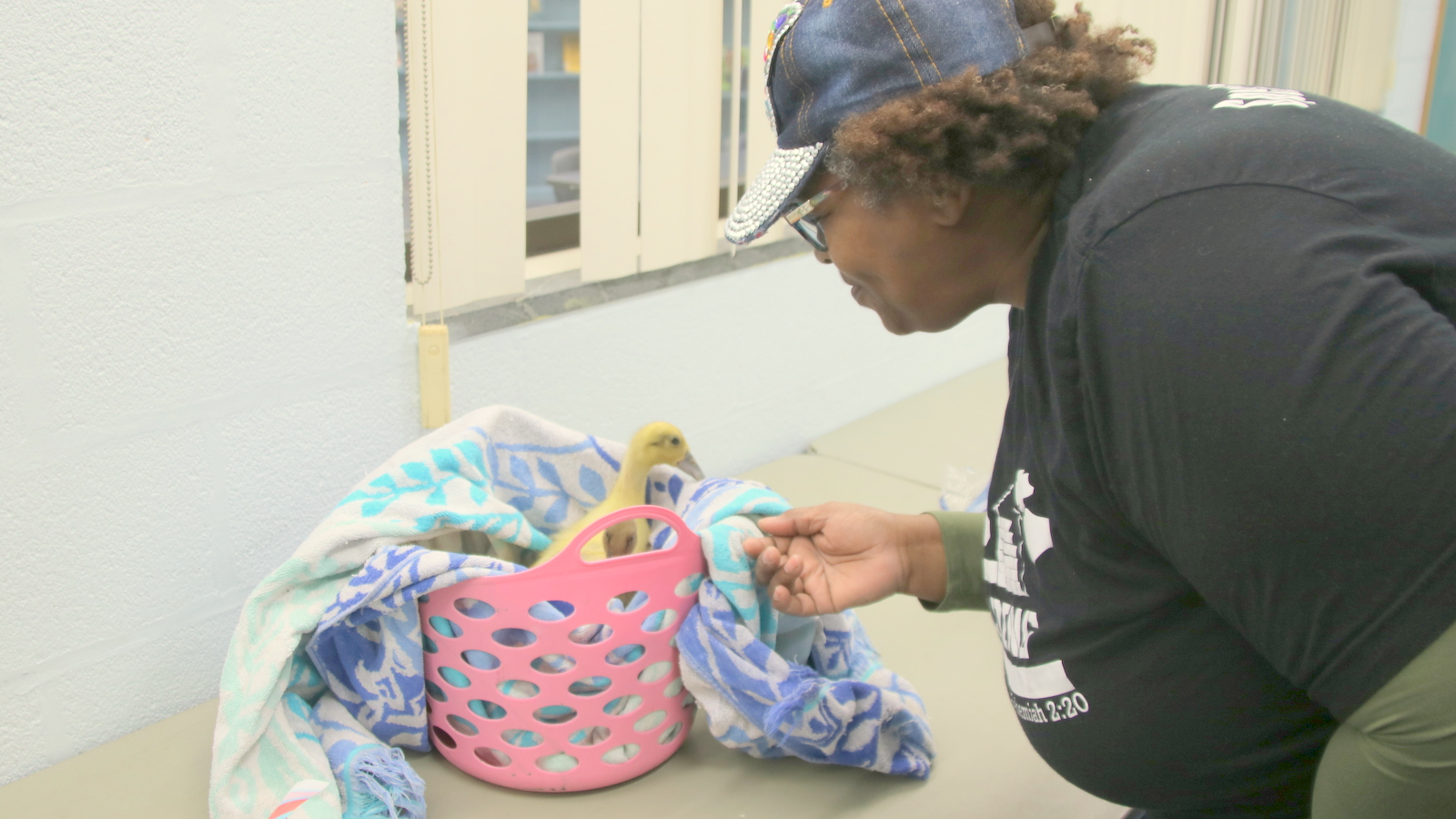 After signing in, Mary Whitley greeted the ducks in a basket on a side table. (Fern Shen)

The group had even researched pumping station sizes and came ready with three alternate sites adjacent to the century-old water tank that looms beside the garden.

“DPW have been our partners,” DeBarber said, noting that the agency helped them set up their water system and helps maintain the fence and fix the pump when it breaks. “We are very thankful to DPW for that.” 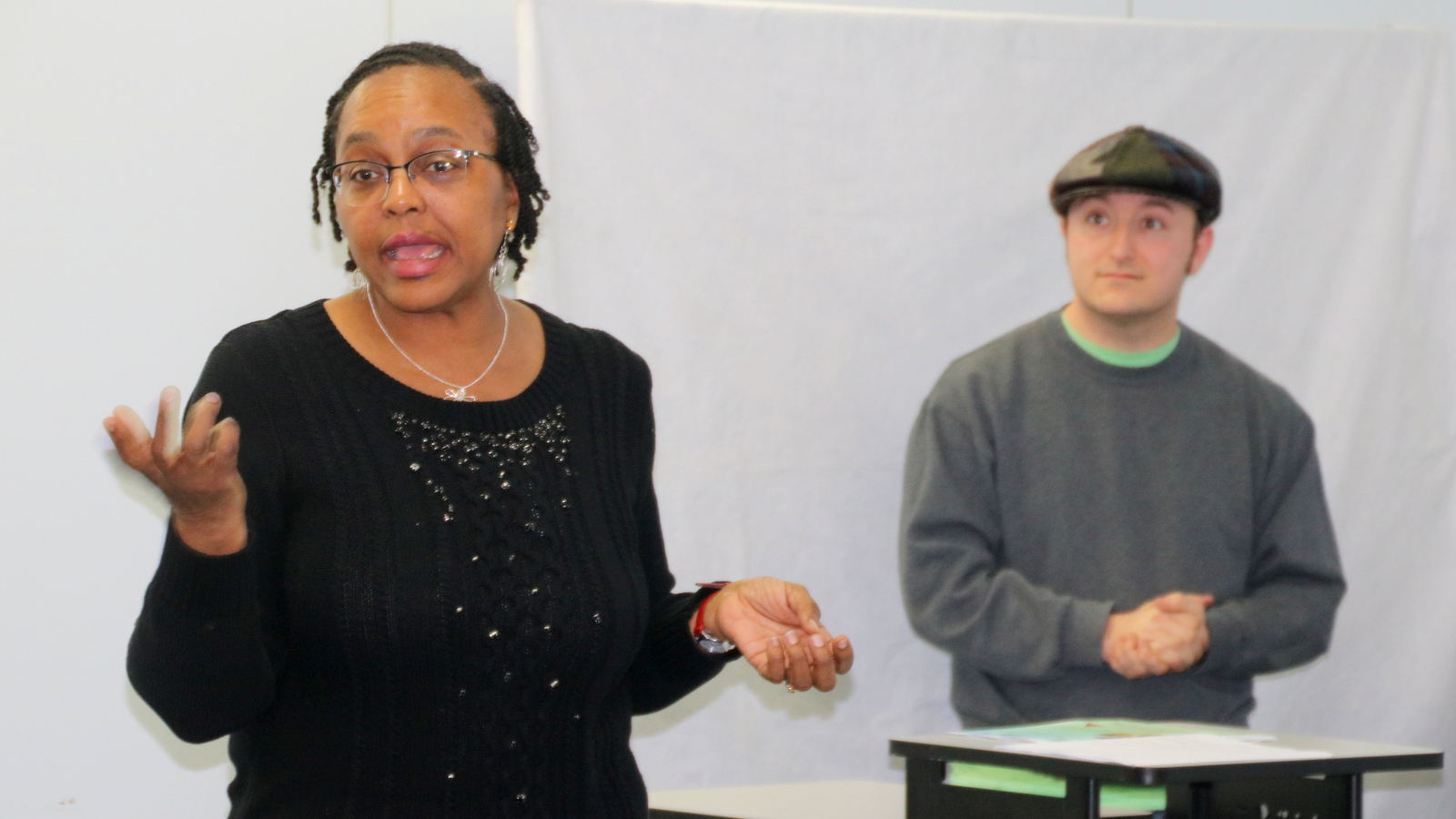 But when the agency’s representatives were asked – as DPW embarks on what could be a years-long decisionmaking process – to take the garden off the table, their answer was “no.”

“We can go back and talk to our engineers and say our preference is not to impinge on this area,” said Marcia Collins, chief of the office of legislative affairs. “It’s just that I can’t tell you today what the outcome will be.”

“And what we would like to do is put in a pumping station at some point in the future in order to prevent us from having to constantly flush the water out, waste the water and refill,” she said.

Recent inquiries about subdividing the land and selling the garden to the community had prompted DPW to alert garden leaders to the city’s possible need for the land, according to Collins.

“Can you take A, B or C and do what you’ve got to do, without disrupting the garden?”  – Councilman Ed Reisinger.

The city officials did not bring any reports, photos or documentation. But water pump manager Bill Dove spoke to the crowd and offered more details. “The water quality issue,” he said, “is low chlorine, because the tank doesn’t turn over” as frequently. 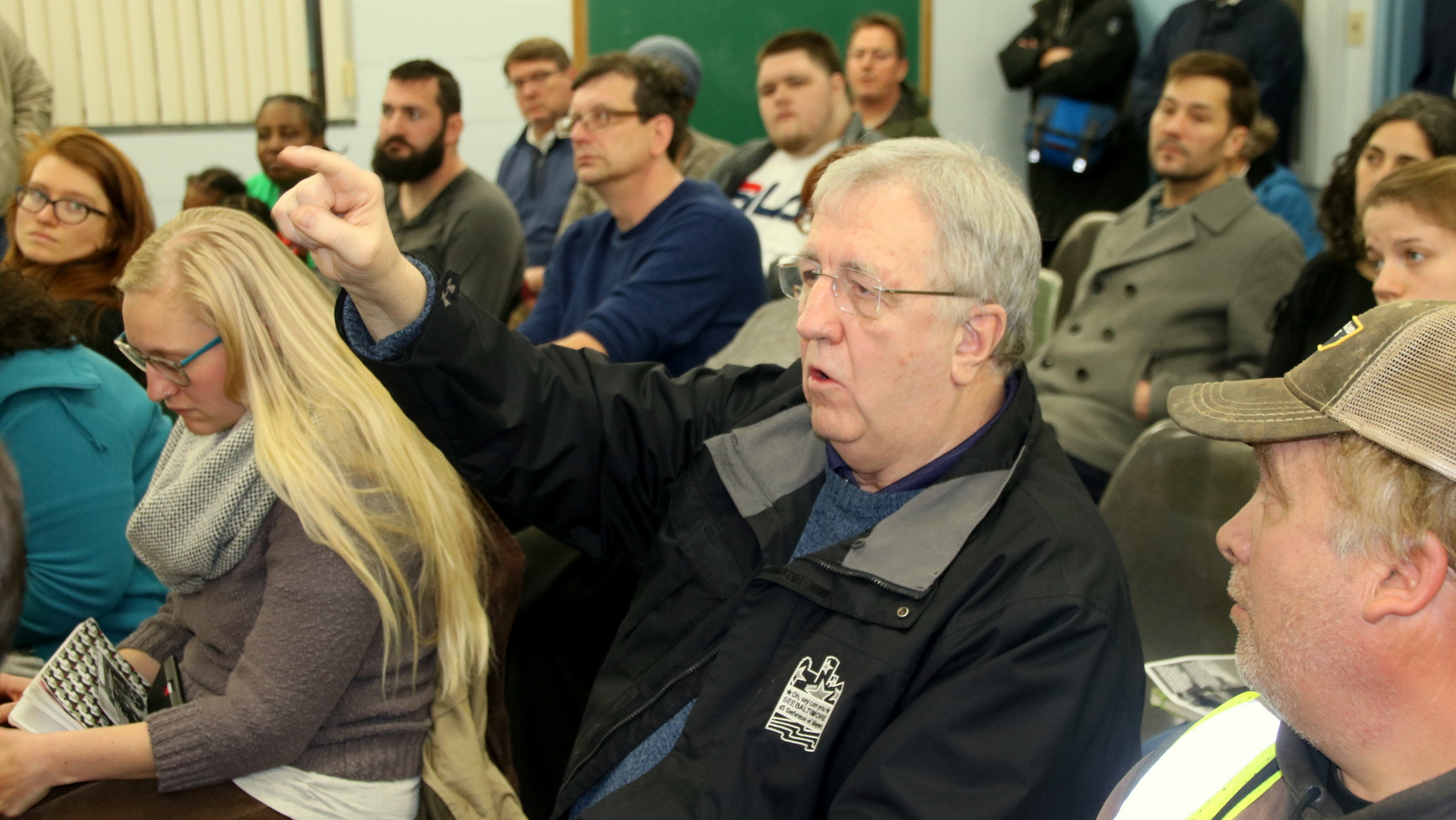 Why doesn’t the tank get refreshed more regularly? That’s because there’s been a drop in usage, Dove said, explaining that “Anne Arundel County has stopped taking water from the city.”

Touting a side benefit, Dove said that new water mains installed as part of the project would improve water pressure for firefighting.

Explaining yet another issue, Dove said putting a new pumping station in Curtis Bay “would allow us to bundle and save money.” The Curtis Bay station could replace an existing pumping station on Washington Boulevard that is “in dire need of repair and has served its usefulness.”

“We are very proud of what you’ve done.”  – DPW’s legislative chief Marcia Collins.

Cost concerns are part of the DPW’s decision-making process, said Michael Gallagher, acting head of the Bureau of Water and Wastewater.

If avoiding the garden costs the department an extra $5 million more, “then that comes into the determination.”

“If all costs are equal,” he added, “we definitely want to keep your garden. It’s a great asset to the city.”

Residents said that DPW needs to do the math a different way – by incorporating equity concerns into the process.

“Curtis Bay and Brooklyn has continued to be dumped on and dis-invested,” said Meleny Thomas. “The city needs to stand up and say, you know what, we’re not going to do this to you again.”

The audience repeatedly pointed to the illustration on the projection screen showing other potential sites near the tank. 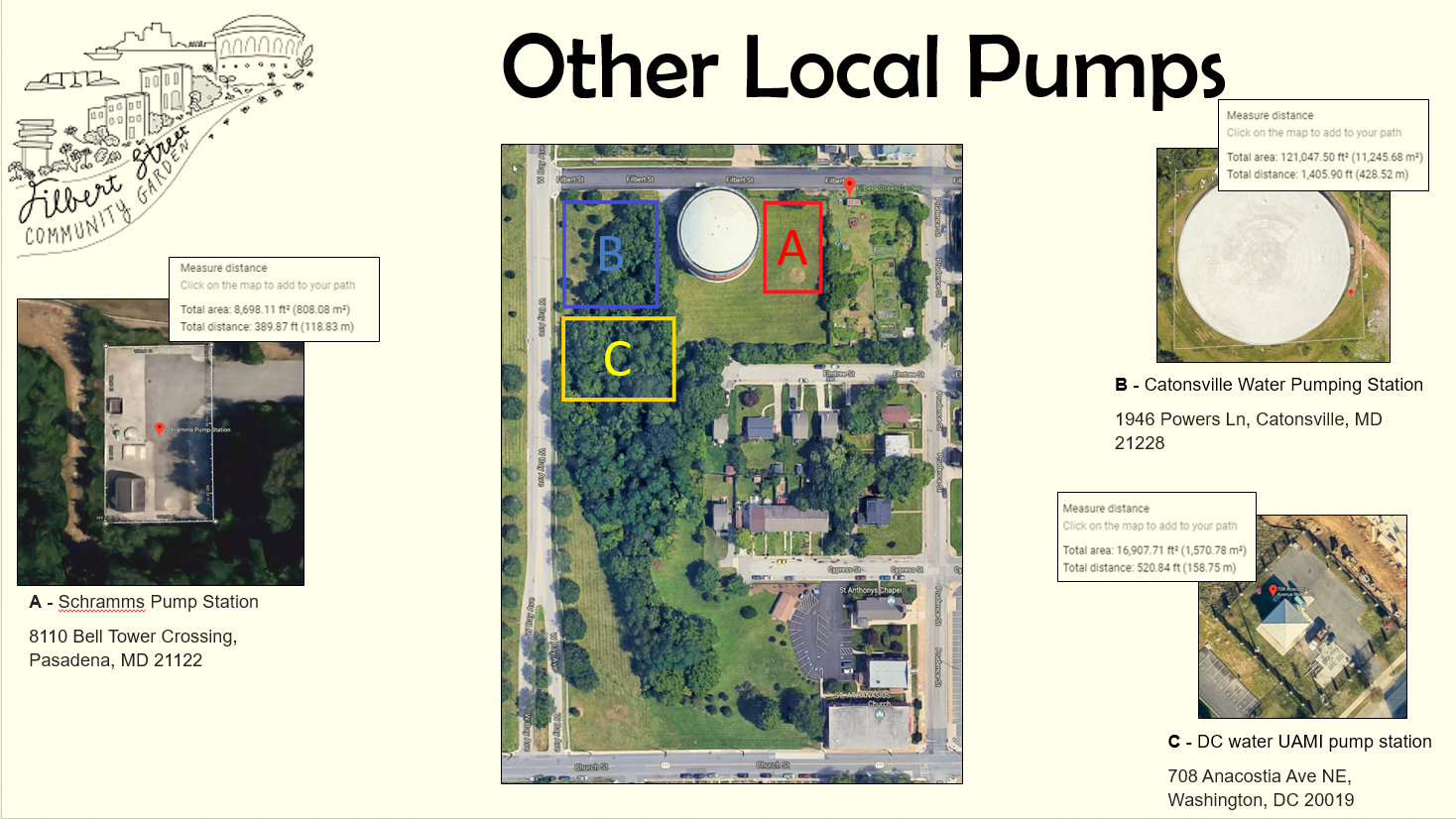 Overlay prepared by garden supporters shows alternate pumping station sites based on the dimensions of other nearby stations. The Filbert Street Garden is to the right of site A.

“Can you take A, B or C and do what you’ve got to do, without disrupting the garden?” Councilman Ed Reisinger asked.

The officials said a process must be followed to determine the garden’s eventual fate. This involves hiring an outside consultant to conduct a year-long assessment of the water demand, infrastructure and hydraulic issues.

“That’s the only way we can get a firm answer,” Dove told Reisinger. Construction might not occur for years beyond that, the officials said, promising to keep community members informed and involved.

“We’re the Wakanda of South Baltimore! But instead of Vibranium, we’ve got black gold!”  – Compost manager Marvin Hayes.

That answer wasn’t acceptable for Reisinger, who represents the South Baltimore district.

“If I’m one of these people, I don’t want to wake up every morning wondering, ‘Is DPW going to move us out?’ We’ve got to have some kind of answer besides ‘we’re communicating,’” he said, adding:

“It shouldn’t take these engineers five to seven years to come up with that. That’s disrespectful!”

One of the community members, Shirlene Gudger-Moss, carefully read a statement explaining that she valued the garden as a place to relax from the stresses of work and caring for her ailing mother.

“My youngest son Kenneth grew his first tomato plant there,” she said

Others, like Baltimore Compost Project manager Marvin Hayes, spoke off the cuff.

“We’re the Wakanda of South Baltimore! But instead of Vibranium, we’ve got black gold!” Hayes exclaimed, prompting laughter and applause.

Smiling along with the crowd, DPW’s Collins made a point of complimenting the garden. “We are very proud of what you’ve done,” she said.

But some said another message was sent by the absence of DPW Director Rudy Chow, who had been scheduled to attend the community meeting.

“Why didn’t Rudy Chow come to this meeting? He was supposed to,” said garden manager Rodette Jones. “At the end of the day, doesn’t he decide?”

“Before anybody starts panicking and protesting, give us the opportunity to work with you.”  – DPW spokesman Kurt Kocher.

Another tense moment came when DPW spokesman Kurt Kocher chided the community, citing a 2014 email from the agency that warned the garden’s founder about putting in an orchard because the garden “is supposed to be temporary.”

“To be fair to us, we’re not telling you anything you didn’t know eight years ago,” Kocher said. “Before anybody starts panicking and protesting, give us the opportunity to work with you.

“Let’s not jump the gun,” he continued. “But if for some reason, we have to move some of this, then adjustments can be made in the community somewhere way down the line.” 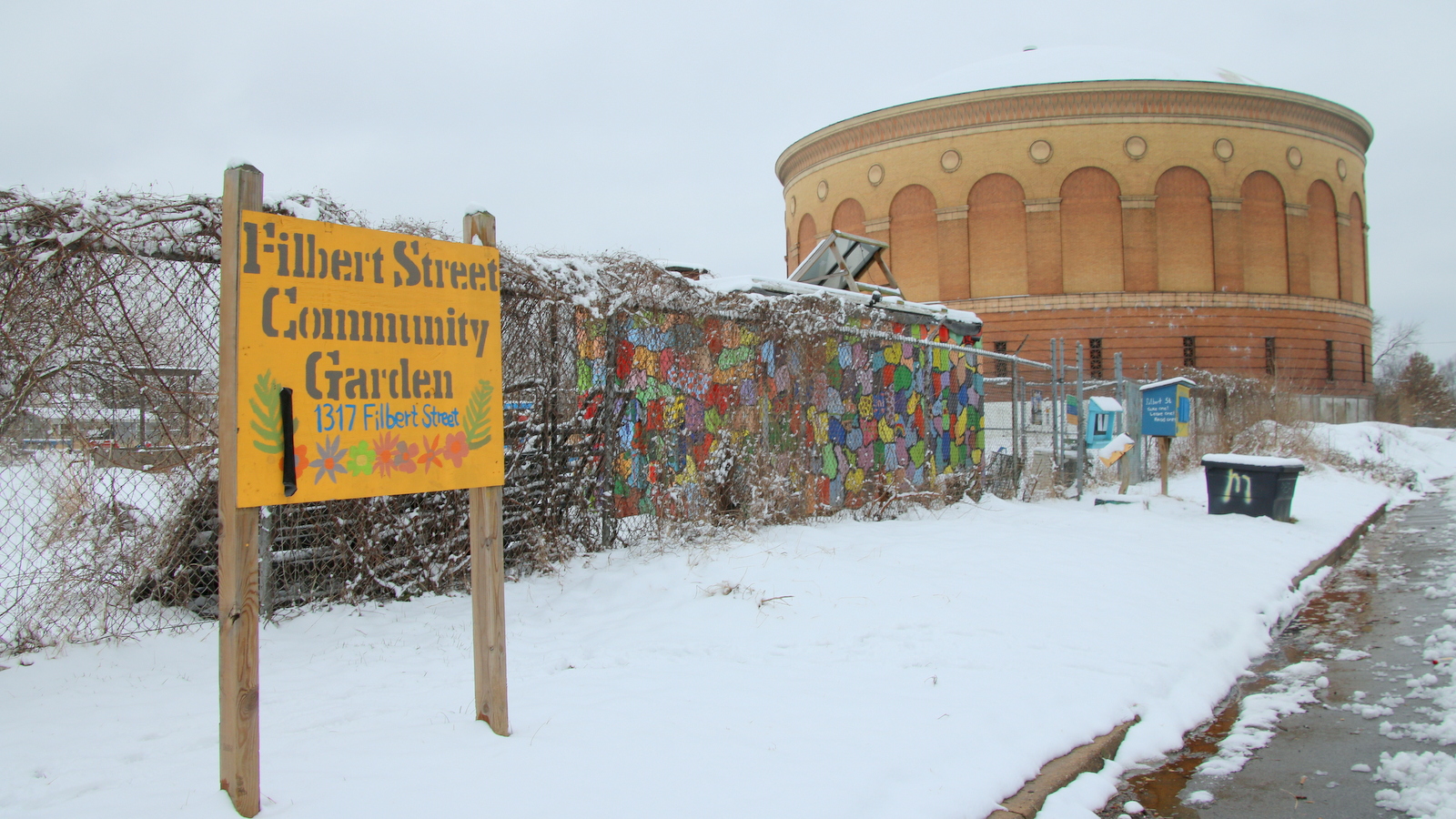 The Curtis Bay Tank, at 1301 Filbert Street, right beside the garden. (Fern Shen)

Going to the Mayor

“I’m not being rude, but I don’t want to hear that, what happened eight years ago. I know you’re a public relations man,” he said. “I’m listening to what the engineer says now.”

The meeting adjourned and residents said they are planning a rally and continuing to circulate an online petition (which as of today had more than 1,000  signatures.)

Asked by The Brew about his next step, the councilman said he plans to meet with Mayor Catherine Pugh, as he did to advance his legislation tightening restrictions on emissions from the Wheelabrator trash incinerator.

“She supported that bill,” Reisinger said. “I’m hoping she will support us on this.” 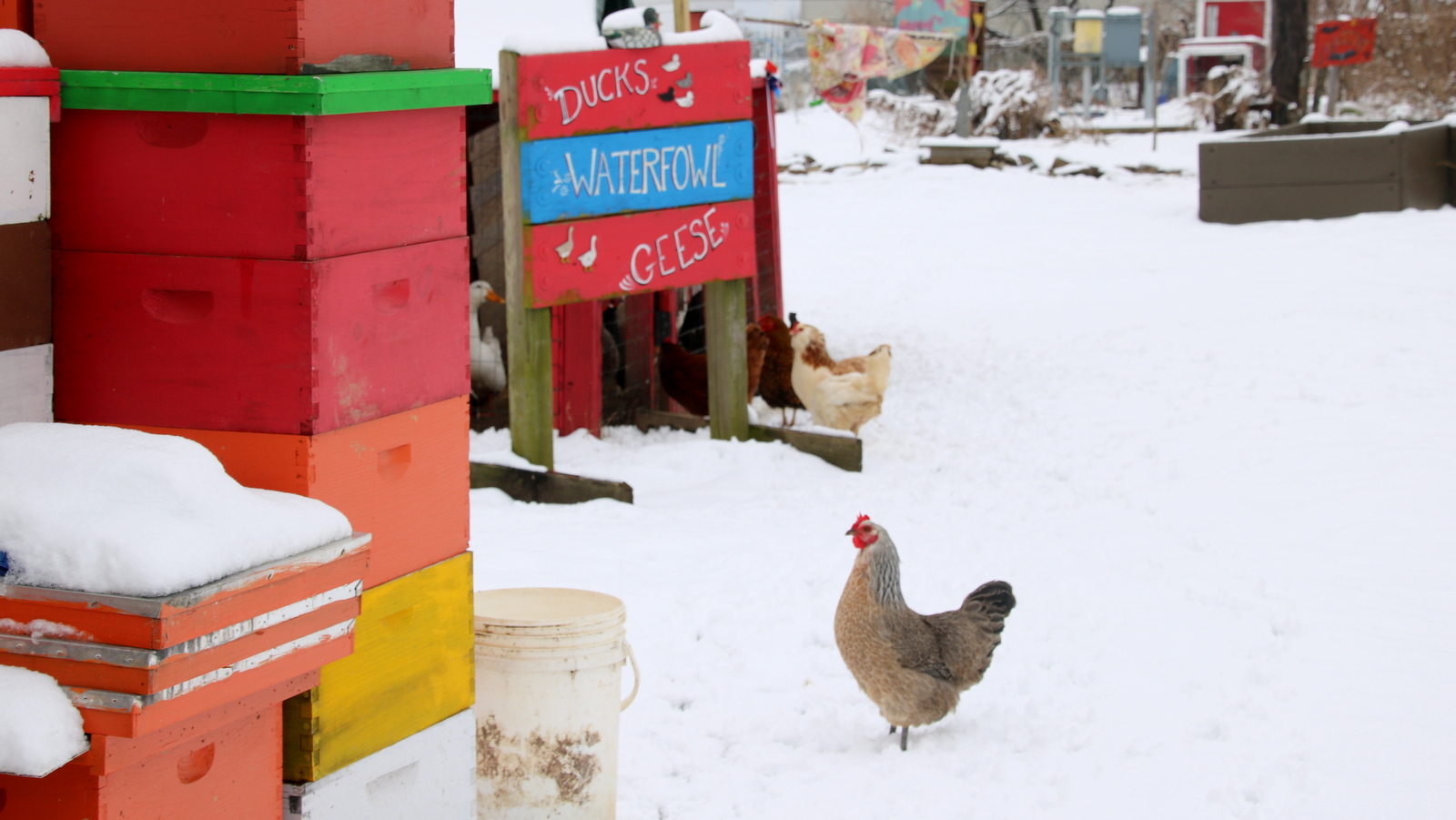 Snow didn’t stop the chickens from checking to see if a visitor had come to bring them food. (Fern Shen)