They chant every hour, often choosing “No justice. No peace. No private police.”

They chant whenever President Ronald J. Daniels passes by, calling on the Johns Hopkins University president to “Ne-go-ti-ate!”

And now, after nearly a week camped out in the Garland Hall administration building, students protesting the school’s private police force initiative have another message:

They say the plan should be dropped because it was championed by Mayor Catherine Pugh, who is under investigation amid possible influence-peddling allegations and who received $16,000 in campaign contributions from top university officials a month before the police force legislation was introduced in Annapolis.

“We urge the City Council to take appropriate actions to stop this private police plan – forged through corrupt dealings between JHU officials and the disgraced mayor – before it becomes irreversible,” Students Against Private Police (SAPP) tweeted.

“This had her name written all over it,” Mira Wattal, a Hopkins junior and SAPP spokesperson, said afterwards. “It’s pay-for-play with Hopkins and now, we see, with all these hospitals and other institutions.”

“Look at how fast she was able to push this through after getting Hopkins money,” Wattal said. “And now she’s about to resign? Where’s the accountability?”

Students: “It’s pay-for-play with Hopkins and now, we see, with all these hospitals and other institutions.”

The checks that administrators wrote to the Committee to Elect Catherine E. Pugh all on a single day – contributions they technically made as individuals – have also drawn criticism from faculty members.

Yesterday, the Homewood Faculty Assembly voted unanimously to demand that the administration answer questions about the political donations and other issues.

JHU: “The mayor was on the record in support of a JHPD back when the legislation was first introduced over a year ago.”

The faculty group also demanded assurance that students currently occupying and protesting will face no punitive action and demanded amnesty for students and faculty involved in the protests.

Asked about the administrators’ donations, a Hopkins spokesperson said Pugh’s support predated the contributions to her reelection campaign.

“The mayor was on the record in support of a JHPD back when the legislation was first introduced over a year ago,” Karen Lancaster, assistant vice president for external relations.

The opposition comes in spite of the fact that the Maryland General Assembly has already approved the bill permitting the University to arm its security force. (The measure is awaiting the signature of Gov. Larry Hogan, who has said he favors it.)

A demonstration drew hundreds of students and supporters to Wyman Park, followed by the the occupation of Garland Hall begun on April 3.

Since then, sustained by donated food and drink, about 15 students a night have been sleeping in the building.

The Homewood Faculty Assembly voted unanimously to demand that the administration answer questions about the political donations and other issues.

They are also protesting the school’s contracts with ICE (U.S. Immigration and Customs Enforcement Agency) and supporting the “Justice for Tyrone West” movement. West died in 2013 after an altercation with officers from Baltimore and Morgan State University during a traffic stop.

Hopkins has been pushing since last year to get police powers for its security force.  School officials have argued that a police department is needed at three of the university’s Baltimore campuses – Homewood, Peabody and East Baltimore – to combat what Daniels has called a sustained spike in muggings and other crimes that threaten students, staff and employees.

Students have pushed back, characterizing the arming of school police as the militarization of the campus and voicing concerns about a school administration they said lacks transparency and accountability.

“They are a lot like city government – top-down and non-democratic,” Wattal said.

Lancaster said the legislation passed in Annapolis, the Community Safety and Strengthening Act, will protect the campus community and has a number of built-in safeguards.

It “puts in place measures to ensure public accountability, public transparency and public input, and we will work together to build a model of constitutional community policing,” she said in an emailed statement.

“After the governor signs the bill into law, it will go into effect on July 1, and we will move into a multiyear period of implementation, which will include engaging with the community regarding the MOU with BPD and recommendations for the first Johns Hopkins Police Accountability Board,” Lancaster said.

“We will continue to work every day to strengthen relationships with the community and keep our campuses and surrounding areas safe,” she continued. “We also will have ongoing opportunities for community engagement, oversight, and input once the JHPD is operational.”

As for the training programs the school offers ICE staff, Lancaster said, they “have no relationship to the enforcement of immigration policies by the current or any other administration.”

“We have been unequivocal in our public statements concerning the consequences of recent immigration policies that have a clear, direct and demonstrable impact on members of our university community,” she said.

“We remain steadfast in our commitment to supporting our international and DACA students, offering broad access and support to our students, faculty, and staff without regard to immigration status and providing exceptional care to immigrant and refugee populations in our hospitals and clinics in the United States and around the world.

“Staying as long as we need to”

Considering that the enabling legislation has already passed, what, then do the students hope to gain and how long do they plan to stay?

“As long as we need to – indefinitely,” Wattal said.

She pointed out that, while the legislation permits the school to establish an armed police force, it does not require them to.

Neighboring communities who need to sign the memorandums of understanding with Hopkins could refuse to. A group of city residents who live near Johns Hopkins campuses have filed the paperwork to launch a petition drive to put the creation of an armed Hopkins police force on the 2020 ballot. 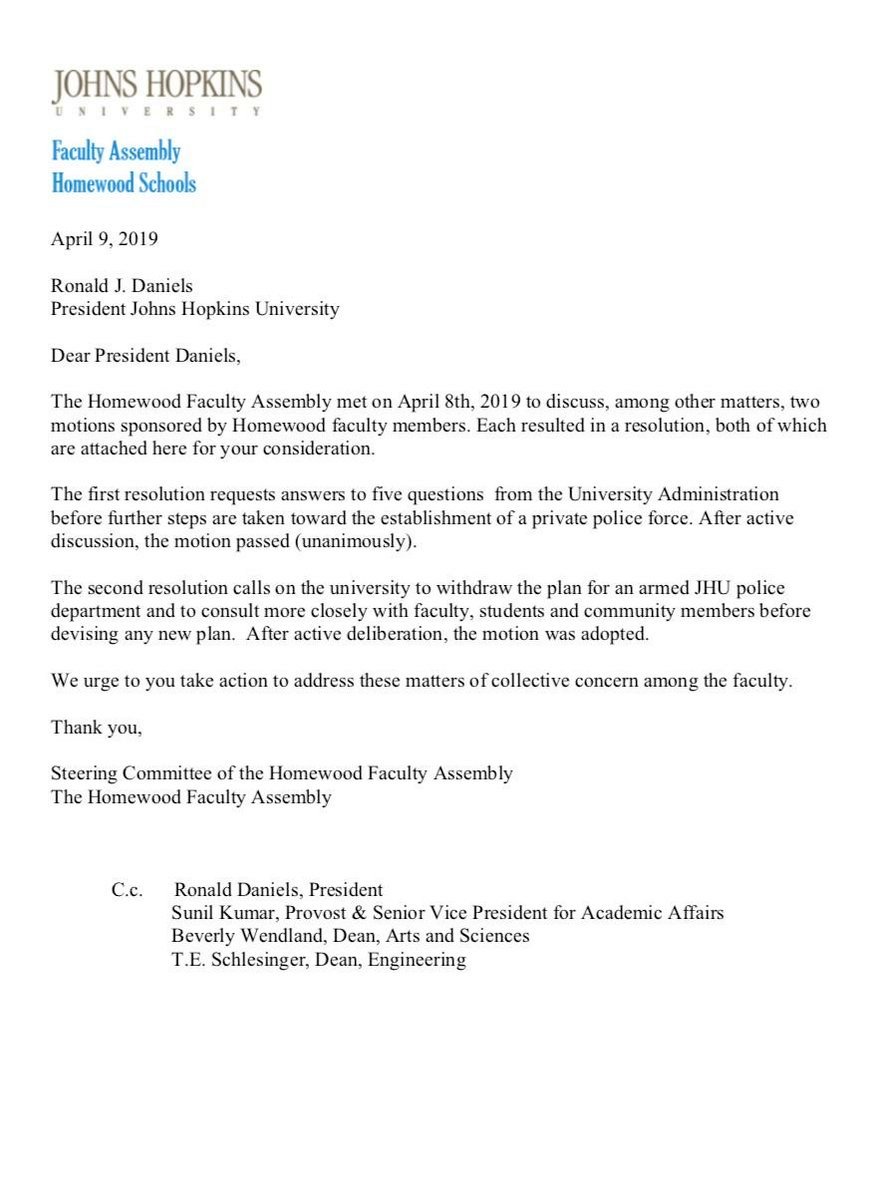 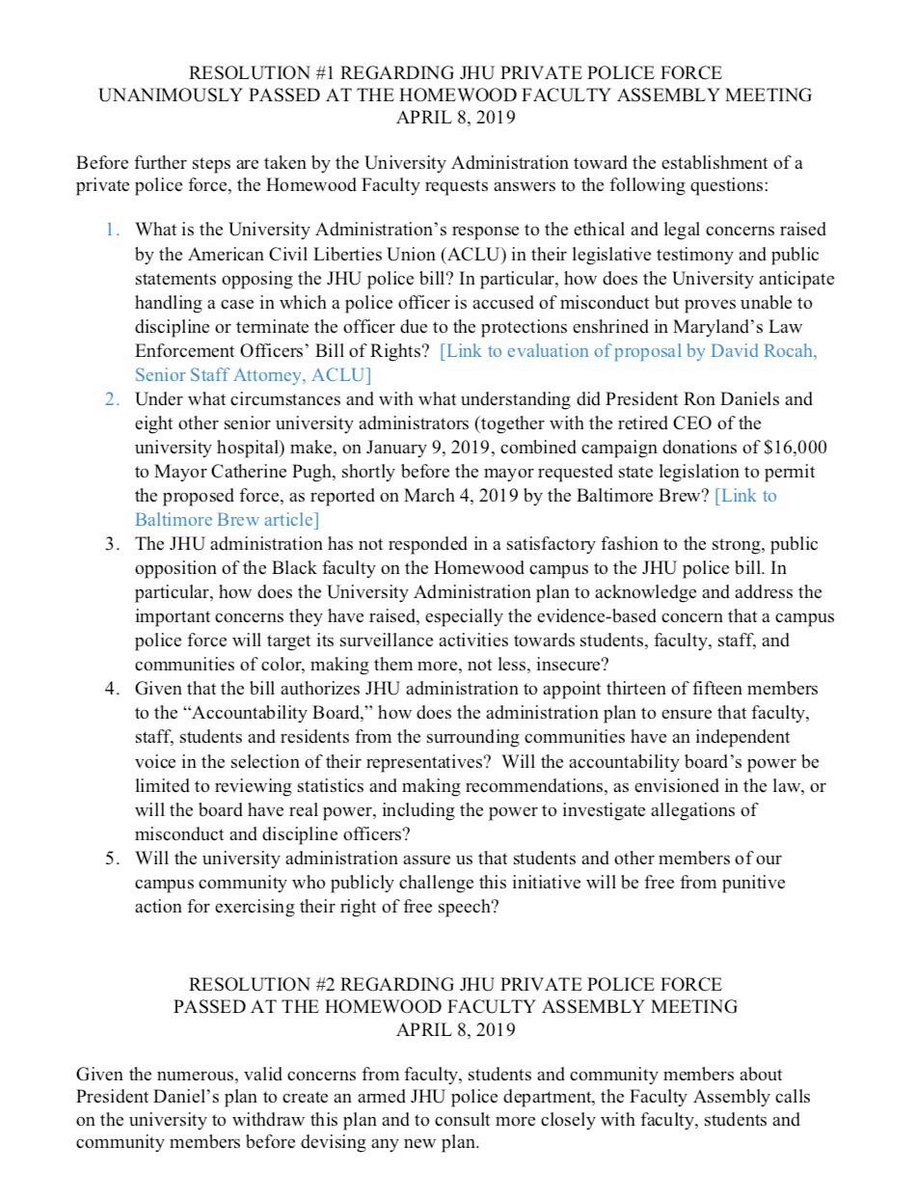