As always, storytime at the Southeast Anchor Library is a scene of organized chaos.

Kids, parents and caregivers belt out “Itsy Bitsy Spider” in Spanish and English, waving colorful bufandas (scarves) and playing with the big batch of toys the staff always has on hand.

But the crowd that turns out – 30 to 50 children, many of whom recently moved to Baltimore from Central American countries – was smaller than usual earlier this month.

This caused Kelsey Harper, the bilingual librarian leading the session, to wonder if it was because of anticipated raids by U.S. Immigration and Customs Enforcement (ICE).

“Some of the Mexican and Honduran families are not here,” Harper said, looking around the auditorium and speculating that they may have chosen to stay at home for fear of who might stop them outside.

If so, they were missing out on a beloved safe space.

“I love how they treat the little kids,”  said Rosa Garcia, a nanny who has been bringing the children she cares for to the library for three years.

“Sometimes, you go to different libraries and they are like, ‘Oh, don’t touch this, don’t touch that,’” Garcia said. “But here they just play with them, talk with them, and you see when you come that [the librarians and staff] really like it.”

Another attraction: the opportunity for children and adults to learn a new language.

“Their parents are so happy that they speak a little words in Spanish and sing in Spanish,” Garcia continued  “Even if [the parents] don’t know the language, they are happy. . . and [the kids] are like, ‘Today, we are going to see Miss Kelsey!’”

“We survive the winters through the library. We would literally be here at 10 o’clock when they open.”

Garcia, originally from Mexico, speaks Spanish with the two toddlers she watches who, in turn, teach a little of the language to their parents.

Carrieann Rudolph, who has been bringing her daughter to storytime since she was born three years ago, said, she loves all of the librarians – and the custodian, too.

“We survive the winters through the library. We would literally be here at 10 o’clock when they open and just be here for hours because it was too cold to be outside or too much to be in the house,” Rudolph said. “This place is very valuable to us.” 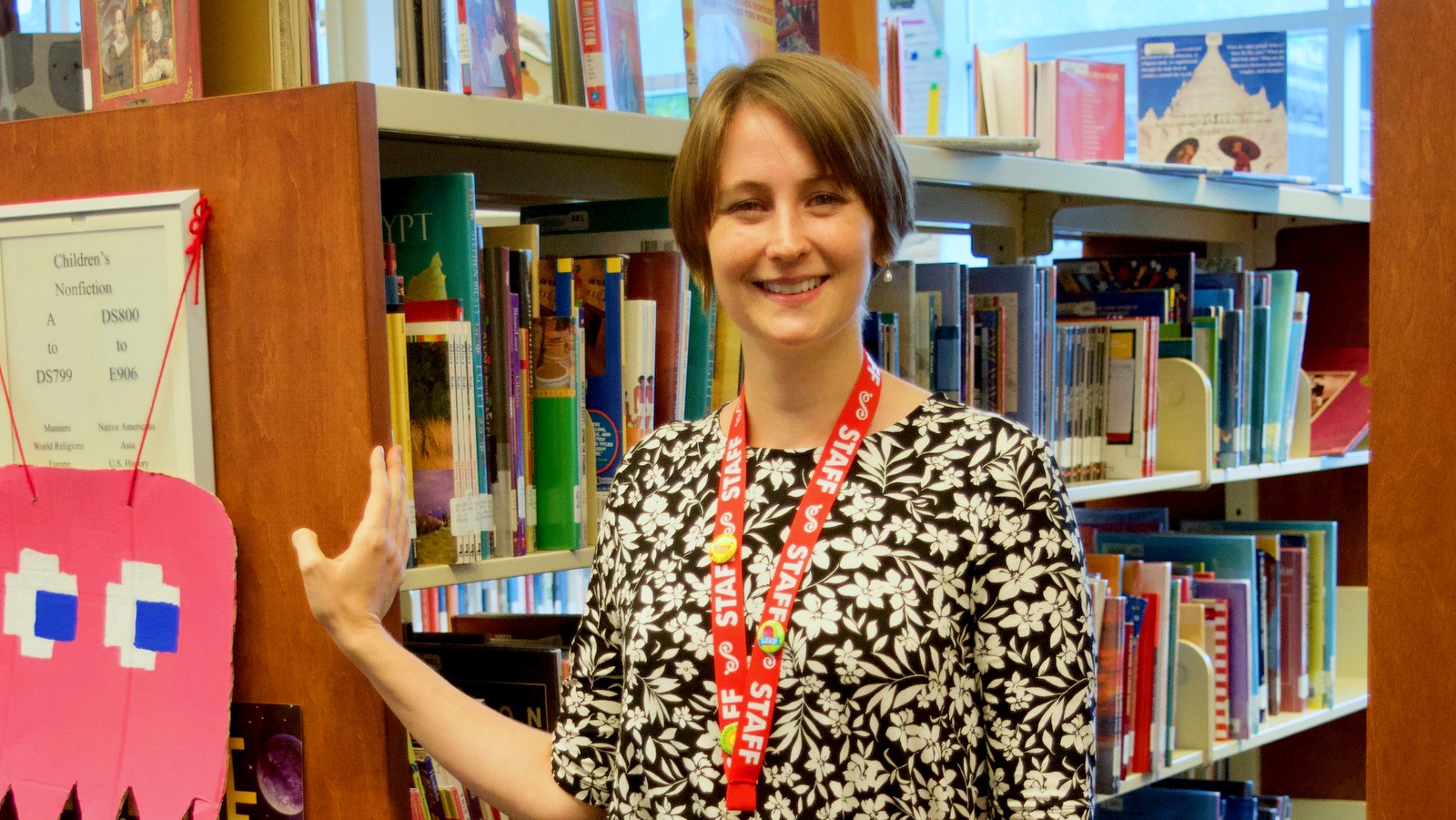 Kelsey Harper, who leads a popular weekly storytime in Spanish and English at the southeast Baltimore branch of the Enoch Pratt Library. (Lizzie Kane)

Staffers see the library as a community lifeline, not just because of features like storytime, but because it offers a myriad of other resources.

With programming through partnerships with local organizations such as the National Aquarium and Baltimore Museum of Industry – plus free WiFi and thousands of books, DVDs, video games and Launchpad tablets with educational software and games – the space provides key social infrastructure and support to newcomers.

Nannies and parents can connect here and network. Kids can find friends. Need the recipe to make that gloppy kid-friendly substance, “slime?” The Pratt’s Southeast Anchor Library has it in English and Spanish.

They’re prepared to help with neighborhood challenges, too, including drug addiction and overdoses. All of the staff members, for example, are trained to use Narcan, the opioid reversal drug.

“In this area, some of our homeless are heavy drug users,” said D. Lynne Distance, an administrator at the branch who has worked in the Enoch Pratt library system for 40 years.

She has two boxes of Narcan in her office, security has one, and a couple of other staff members have it as well.

Another way the Enoch Pratt Library system has tried to help the community is by relaxing their requirements for getting a library card. They now only require a valid photo ID, no longer needing proof of a Baltimore address.

“That particular rule had been an obstacle for so many families,” Harper said.  “I think [the removal] is going to make a big difference.”

“People need to have that right to get their information and to read the books that they read,” Distance said. “The library is to me is what society would look like if society was looking the way it was supposed to look.”

City libraries also have gone fine free. All books are automatically renewed, eliminating the costs for families with overdue books, which has “been huge,” according Meghan McCorkell, Enoch Pratt’s communications director.

“Our rule this year has been about breaking down barriers and figuring out what those barriers are for access,” she said. “People used to say a library’s business is books. Well, our business is access, and that is what we provide.” 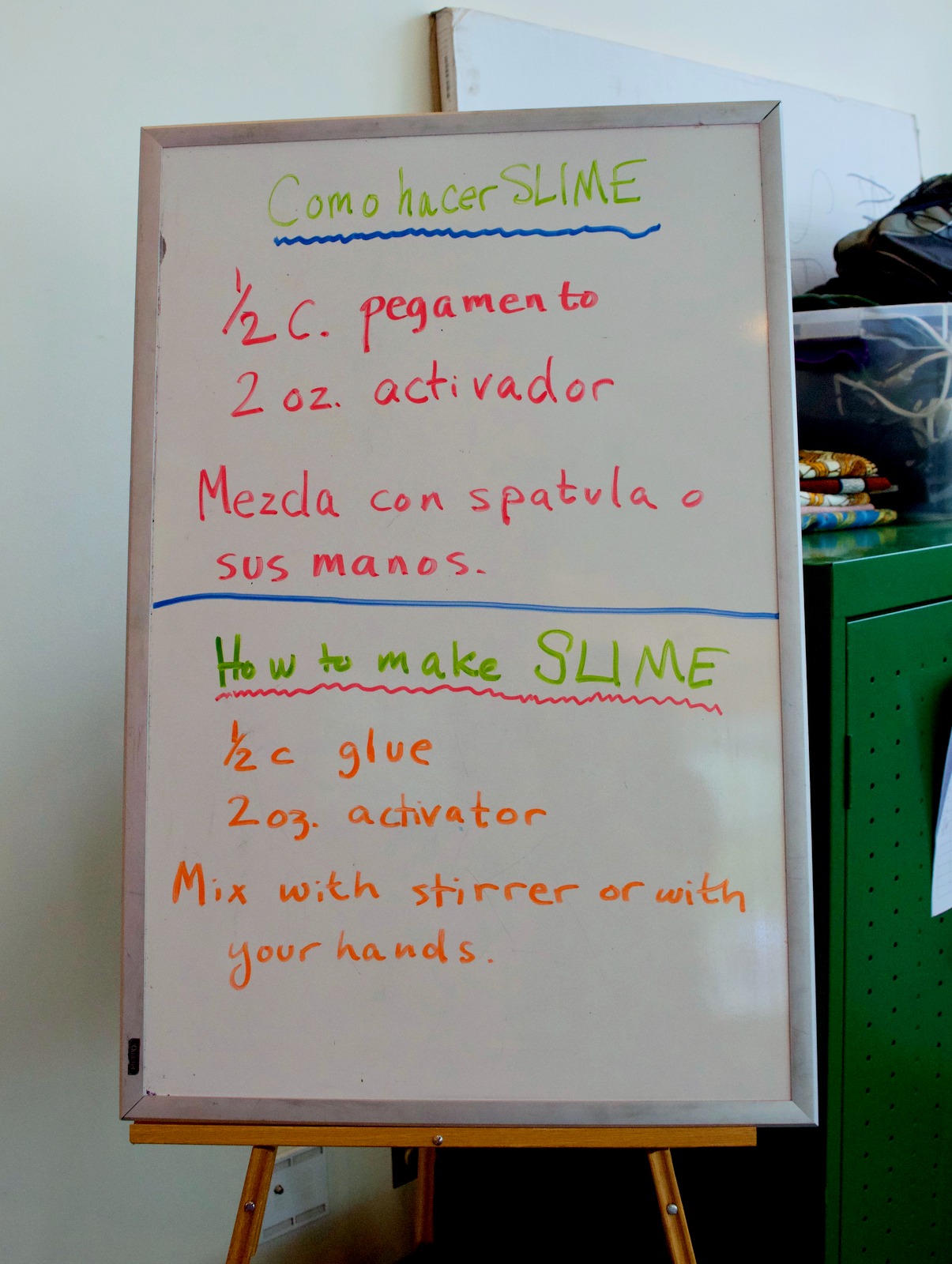 At the Highlandtown branch of the Pratt Library, the slime recipe comes in two languages. (Lizzie Kane)

The Trump Administration’s threatened ICE raids present another challenge for the library branch, located on Eastern Ave in the center of multi-ethnic Highlandtown.

“It’s a miniature Queens,” Distance says, pointing to the neighborhood’s many Spanish speakers, along with people from the Middle East, Africa and the Baltic states.

Asked if the library has provided help to patrons who feel threatened by ICE, Distance said that people have been talked to “on an individual basis” and that information is kept confidential.

Distance shared a story of an immigrant father who was taken by ICE when dropping his son off at school.

ICE agents “took the father out of the elementary school – he was trying to explain to them that he had a son there, and he was the only caretaker for the son. The little boy came [to the library] and he was upset. We got him calmed down, and we were able to get in touch with his aunt.”

At the southeast branch, “nobody is going to ask to see their citizenship.”

Advocacy organizations are welcome to use library space to disseminate information.

“Casa de Maryland and the Esperanza Center have been able to use the library to host meetings about knowing what your rights are,” Harper said. “They sent a super-informative booklet, ‘Conoces Sus Derechos/Know Your Rights,’ that we can share with our Spanish-speaking patrons.”

The flyer explains what to do when ICE comes to peoples’ homes, noting that they do not have to open their doors and that they can ask the agents to slide warrants under the doors.

Harper added that the bilingual storytime helps bring the community together during hard times.

“They all feel comfortable coming in here because the library is a safe harbor,” Distance said.

“It is a place where they can come and get the things that they need without being judged about what country they come from – nobody is going to ask to see their citizenship.”