Davis was responding to a judge’s denial yesterday of a rehearing of a July ruling by the Fourth Circuit Court of Appeals that the city’s practice amounted to “hush money” that violated the free speech provisions of the First Amendment.

The case will now be returning to the Maryland District Court where a judge will interpret the Court of Appeals ruling.

The ACLU of Maryland, which filed the case on behalf of  Ashley Overbey Underwood and this website, Baltimore Brew, hailed yesterday’s decision as “another victory for the free speech rights of the mostly Black + Brown residents of Baltimore who are survivors of police abuse!”

Overbey had argued that the city improperly denied her half of her settlement money after she responded to comments online about her experience with police.

The Brew said that the “gag orders” contained in settlements thwart the media’s ability to interview victims of alleged police misconduct and violated the “free press” guarantees of the Constitution. 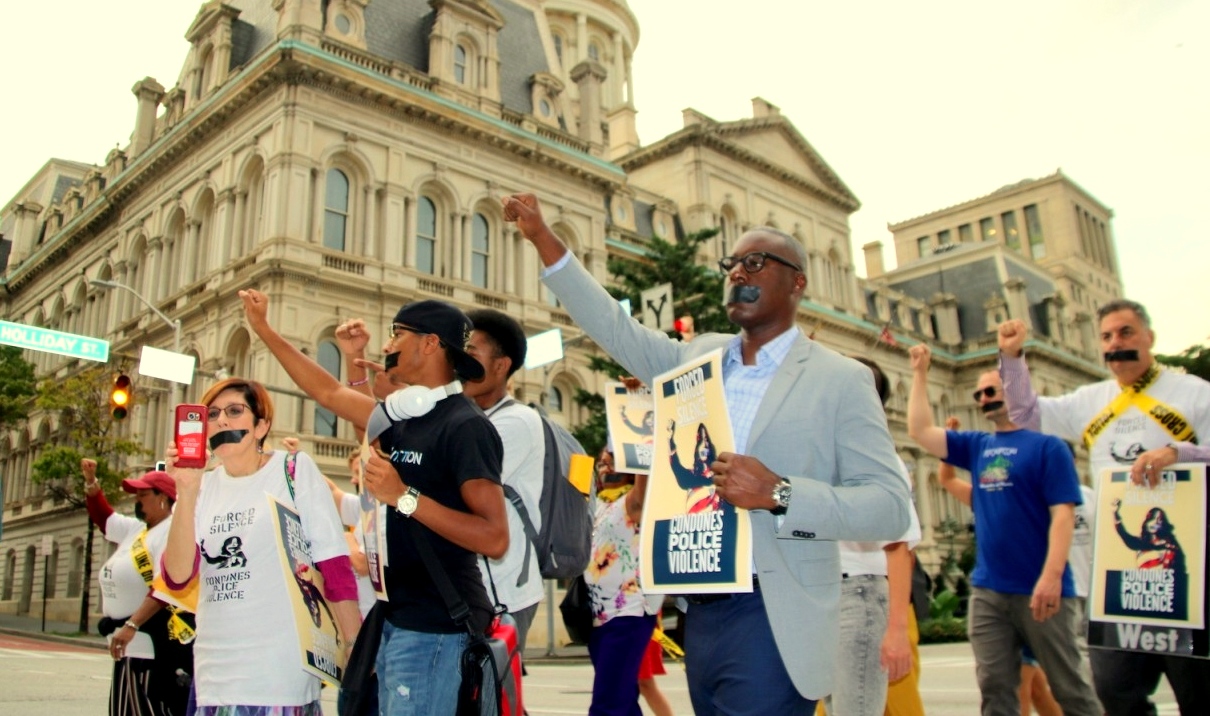 “The city will not seek review in the Supreme Court,” Davis declared today when questioned. “We, of course, will do whatever the [district] court orders.”

But he also repeated the argument, first made by Mayor Bernard C. “Jack” Young at a press conference last month, that the city had changed the non-disparagement language of its settlements so that citizens can speak freely.

“As the mayor and I keep saying,” Davis said today, “people can say whatever they want about their cases when the incident happens, when they file suit, before any settlement and after any settlement, if any. Full stop. That’s been my policy for as long as I’ve been here.”

ACLU’s senior staff attorney, David Rocah, vigorously objected to Davis’ assertion, saying “the supposed cessation of this practice” was never cited by the city during two full years of litigation. (Ashley Overbey v. Mayor and City Council of Baltimore was filed in June 2017.)

Rocah said non-disparagement provisions, or “gag orders,” continue to be inserted into police settlements by the law department.

The revised language bans statements that could result in “reputational loss” to the City of Baltimore.

He provided The Brew with a copy of language that still prohibits a claimant and his or her agents, representatives and attorneys from “any attempt to defame and/or disparage the Released Parties.”

The revised language bans statements that could result in “reputational loss” to the City of Baltimore, with violators subject to monetary penalties.

Davis, who retired as a judge from the same Fourth Circuit Appeals Court that yesterday rejected his request for a rehearing, has said that he had asked for the rehearing out of the necessity of defending the city’s actions prior to his becoming its chief legal officer in September 2017.

Both he and Mayor Young have objected to a City Council bill that would bar the use of non-disparagement agreements in police settlements.

They say the bill violates the powers granted under the city charter to the mayor, an assertion the ACLU debunked in a lengthy memorandum to the Council.

The measure, which would also require the law department to publicly post “claims against Baltimore City regarding police misconduct and unlawful discrimination,” has not been scheduled for a public hearing.