Reading from a prepared statement at his weekly press availability, Young also criticized a bill before the City Council that would end Baltimore’s use of gag orders, known formally as non-disparagement agreements or NDAs.

Young said Bill 19-0409, introduced on Monday by Council President Brandon M. Scott and other members, “is in conflict with the city charter.”

Young then turned to Deputy City Solicitor Dana Moore, who expanded – and somewhat modified – the mayor’s statement that the NDAs, called unconstitutional by a Fourth Circuit U.S. Court of Appeals panel last month, had been “stopped.”

Under new language instituted by Davis after he became city solicitor, plaintiffs are no longer barred from publicly discussing police misconduct cases, according to Moore.

“The new agreements say you are free to discuss your case,” she said. “You can say whatever you want about your case. You are not inhibited in any way in discussing the facts of the case.”

The ACLU of Maryland, which brought the lawsuit against the city’s use of NDAs on behalf of Ashley Overbey Underwood and The Baltimore Brew, denounced Moore’s statement as factually wrong.

“It is staggeringly unbelievable that the city solicitor’s office has made this assertion,” said David Rocah, a senior staff attorney, when informed of her statement.

Rocah said a major reason why the ACLU filed the lawsuit was to obtain a court injunction against any use of NDAs by the city.

“The supposed cessation of this practice has not been mentioned in the litigation we have had,” Rocah said.

He said the city law department did change the NDA last year, but the revised language still stifles public discussion of police misconduct and violates the First Amendment.

Rocah also stated NDAs continue to be inserted in police settlement cases, with at least one agreement in 2018 stipulating more draconian terms against public speech than the revised language the city purports to be using in all settlements.

Rocah produced an April 6, 2018 email from the city law department that disclosed the terms of the new NDAs.

The revised language says that, in exchange for a cash settlement from the city, the claimant and his or her agents, representatives and attorneys “shall strictly refrain from and avoid any attempt to defame and/or disparage the Released Parties. . . and strictly limit their public comments, including discussing, supplying or posting any verbal, written or electronic expression or communication, or any deed or act of communication. . . to the facts alleged in the pleadings and motions filed with the court.”

The revised NDA includes liquidating damages the city is entitled to receive from a claimant who violates the settlement terms.

Such damages could include not only “all reasonable attorneys’ fees,” but “reputational loss, increased litigation and other such intangible or immeasurable potential harms” to Baltimore City. 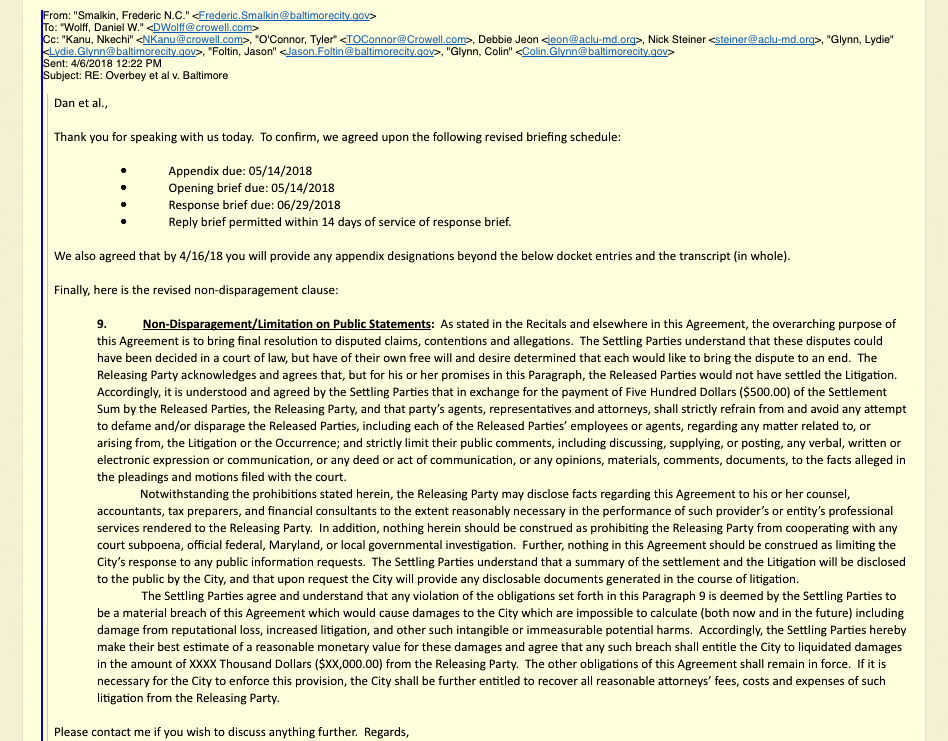 Moore was asked yesterday why the city solicitor was petitioning for a full Appeals Court review of the ACLU lawsuit if the NDA provisions had been voided.

Moore said Solicitor Davis believes “he needs to defend the earlier decisions” of the previous city solicitor. She was apparently referring to George Nilson, who left city government in 2016 following an unrelated dispute with then-mayor Stephanie Rawlings-Blake.

“We feel an obligation on behalf of all the litigants who are part of the Fourth Circuit” to dispute the Appeals panel ruling.  – Dana Moore.

Because of its strong conviction that the Fourth Circuit panel erred by framing the matter as an issue of free speech rather than of contract law, “we feel an obligation on behalf of all the litigants who are part of the Fourth Circuit – Maryland, Virginia, West Virginia, North Carolina and South Carolina” to dispute the ruling, Moore said.

Asked last night if the April 6, 2018 email undercut what she told the media, Moore said, “I do not believe that the language [of the revised NDA] is in conflict with the comments I made at this morning’s press conference.”

Andre Davis, who did not attend yesterday’s press conference because of a prior scheduled meeting, also vigorously disputed the ACLU’s claims.

He sent The Brew a copy of “the new and the old language” in the NDAs with this cover statement, “Any lawyer who cannot see the profound difference between the two should probably not be practicing law.”

Rocah responded this morning by saying that “any lawyer who thinks that a somewhat narrower NDA is the same thing as no NDA should probably not be practicing law.”

Here is the material provided by Davis: 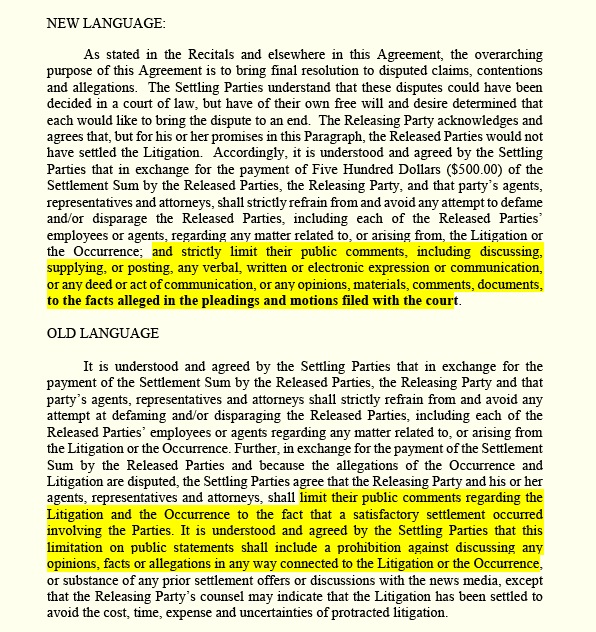 The text marked in yellow comes from Davis’ office. This document does not include the “liquidating damages” section of the revised NDA that could be assessed by the city against claimants who violate its terms.