Five months after a developer pulverized two 1840s stone houses set aside for preservation, the residents of Woodberry have voted overwhelmingly to support having the city designate their community a local historic district.

In a survey conducted this summer and fall, owners of 99 properties said they favored making Woodberry a local historic district, while owners of 41 properties opposed the idea – a difference of 71% to 29%. Owners of 519 properties were contacted.

The results were presented yesterday during a hearing of Baltimore’s Commission for Historical and Architectural Preservation (CHAP), the agency that conducted the survey.

“CHAP rules and regulations do not specify a required level of support, but overall the votes of support were more than twice the number of votes in opposition,” said CHAP planner Walter W. Gallas. 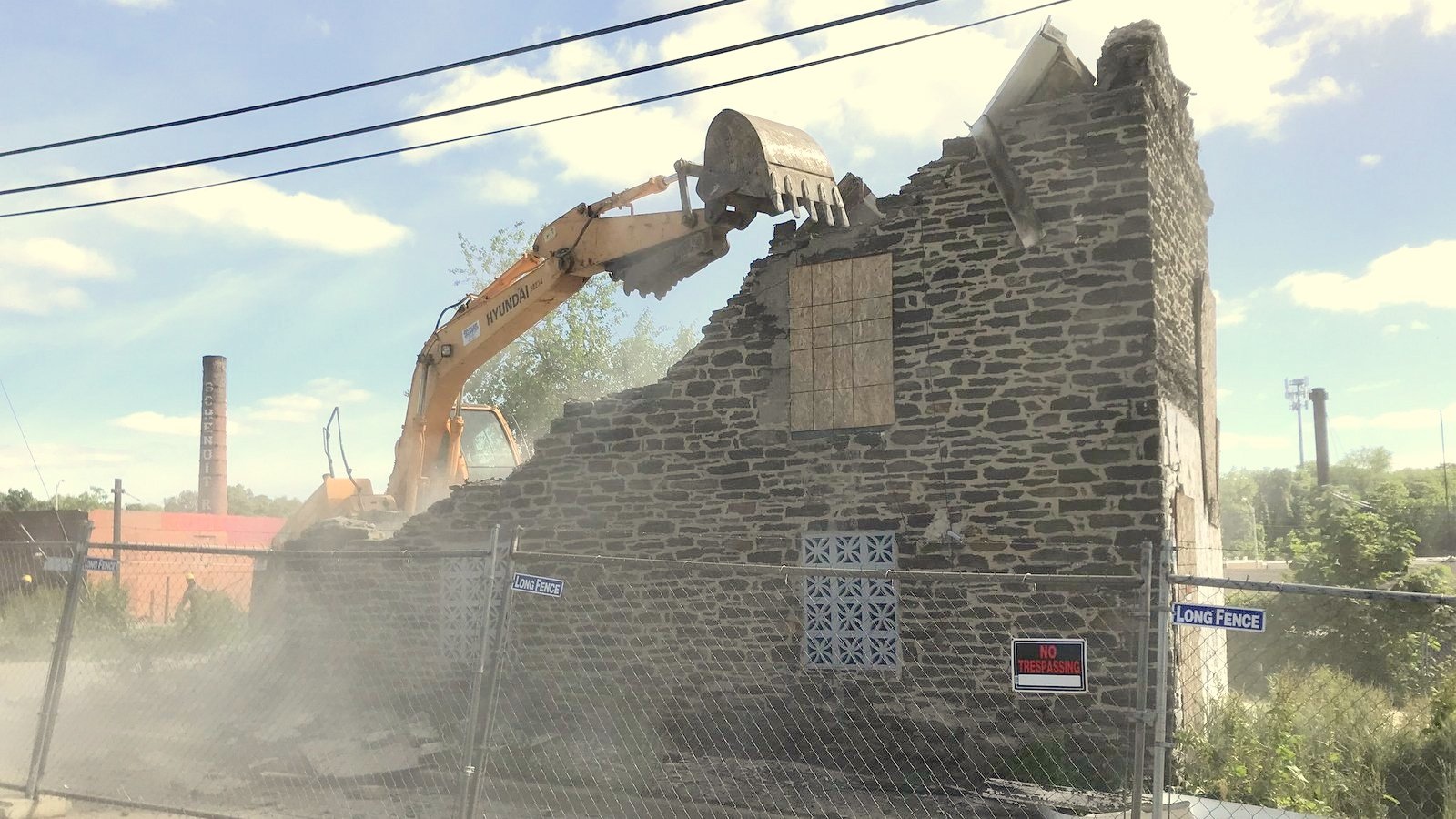 Last May’s demolition of two stone houses in the heart of Woodberry spurred community efforts to designate the community a historic district. (sevensixfive)

The only person who testified against the proposed designation at the hearing was developer Larry Jennings, general partner of Valstone Partners, a group that has gained control of two development parcels and other commercial assets at Clipper Mill.

“What we mainly have in Clipper Mill right now is an anti-development movement, not a movement to preserve anything,” he told the commission.

After hearing the results of the survey and listening to public testimony, the commission voted unanimously to move ahead with the designation, a process that could take up to six months and would require approval from the City Council and Mayor Bernard C. “Jack” Young.

The Woodberry Community Association asked CHAP last spring to consider making Woodberry a local historic district after two stone houses that the association thought were to be partially preserved were torn down without public notice.

The owner, an LLC controlled by Katherine Jennings, was later fined by the housing department for failing to post a demolition notice on the buildings. 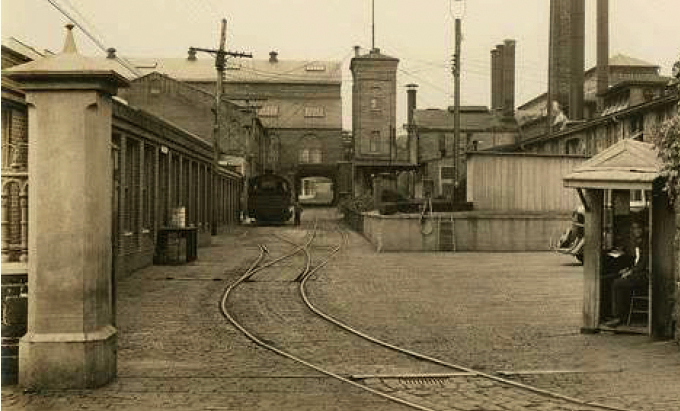 The Poole & Hunt Foundry and Machine Works a century ago and the same site today after the factory was turned into offices, shops and a restaurant by Struever Brothers, Eccles & Rouse. (CHAP) 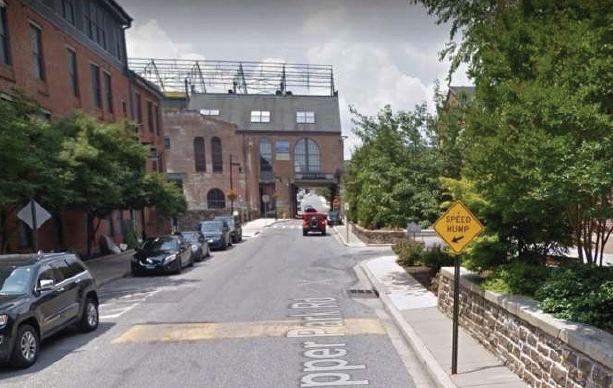 “Inner Harbor for us”

Yesterday a dozen speakers testified in support of the nomination, saying Woodberry is an unusually intact mill village that needs the protection of a local historic district designation.

Tracy Brown, a resident since 1996, said she was drawn to the area by its old mill buildings and village-like atmosphere. She said she believes having Woodberry protected by CHAP, with its design review process and public hearings, will give residents more of a voice in protecting their community from out-of-character development.

“Those mill buildings are the Inner Harbor for us,” she said. “That is the Washington Monument in Mount Vernon. That needs to be preserved. Nobody here is saying nothing can change. We want to have a say in what can happen, that it’s done intelligently.”

“It’s that collective, more than any individual [structure], that’s important. In order to protect any of it, we need to protect all of it,” Hopkins said, calling Woodberry a key element of the whole. 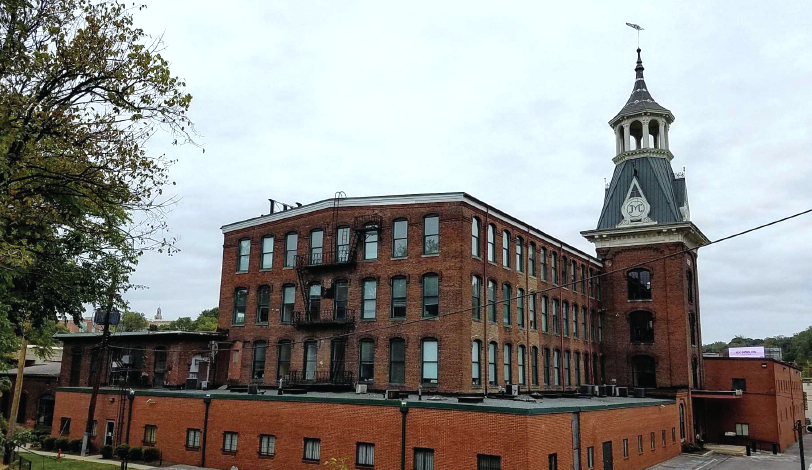 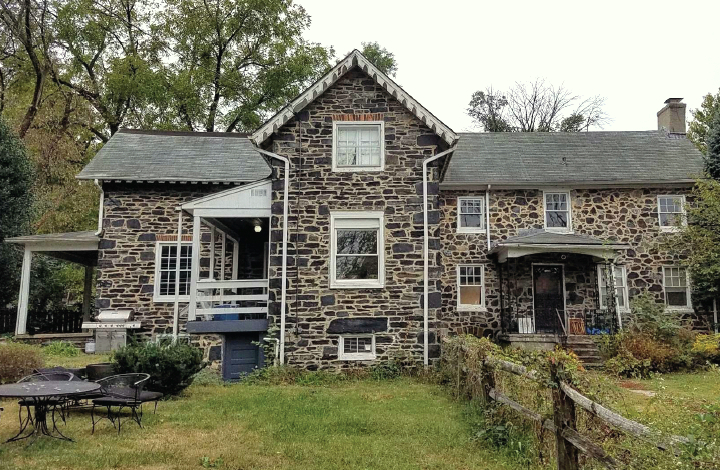 Elly Cowan, director of advocacy for Preservation Maryland, said local designation does more to protect historic areas than being in a federal district.

“At Preservation Maryland, we’ve seen citywide how a lack of local designation can have detrimental effects on historic neighborhoods,” she said.

“While it’s wonderful to have the national recognition of significance through a National Register district, it doesn’t quite have the same teeth in protecting the historic character of a neighborhood.” 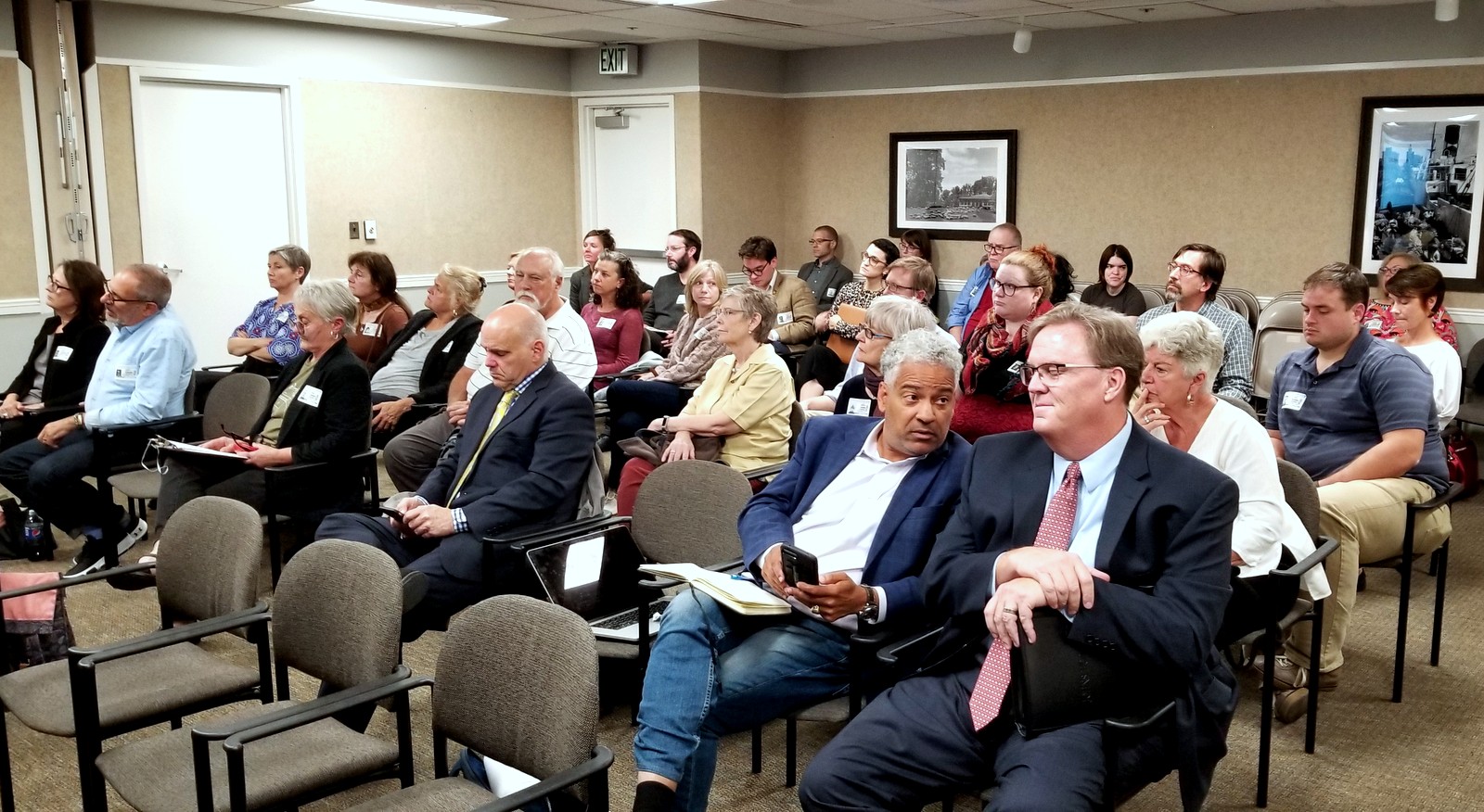 In addition to the tear down of the two stone houses by Katherine Jennings, residents have expressed concern about the fate of the nearby Tractor Building that Larry Jennings, her ex-husband, wants to convert to 99 apartments by removing the roof and the south wall.

Woodberry is already a National Register Historic District, but Woodberry leaders said they want the area to be a locally designated historic district as well because that would give historic buildings another layer of protection from incidents such as the May 21 demolition on Clipper Road.

When an area is designated a local historic district, proposed changes to the exteriors of buildings must be reviewed and approved by CHAP before a building permit is issued. That’s not the case with National Register districts.

The area targeted for designation is bounded roughly by the Jones Falls Expressway on the east, Druid Hill Park on the south, Malden Avenue and the William E. Hooper and Sons property on the west, and Rockrose Avenue on the north.

It includes Meadow Mill, Clipper Mill, Brick Hill, the studios of WBFF (FOX45) and two churches – about 80 acres in all.

Larry Jennings warned that CHAP could cause chaos if it designates the community a local historic district. He said the Clipper Mill portion of Woodberry is already a Planned Unit Development (PUD), a zoning category that governs what can be built in a given location.

Making Clipper Mill part of a CHAP district would add another layer of regulation that could be confusing and make it harder to get development plans approved.

“The question is, what’s the legal governance, the PUD or the CHAP district?” Jennings argued. “If you have a CHAP district in confusion with a PUD, you have chaos.” 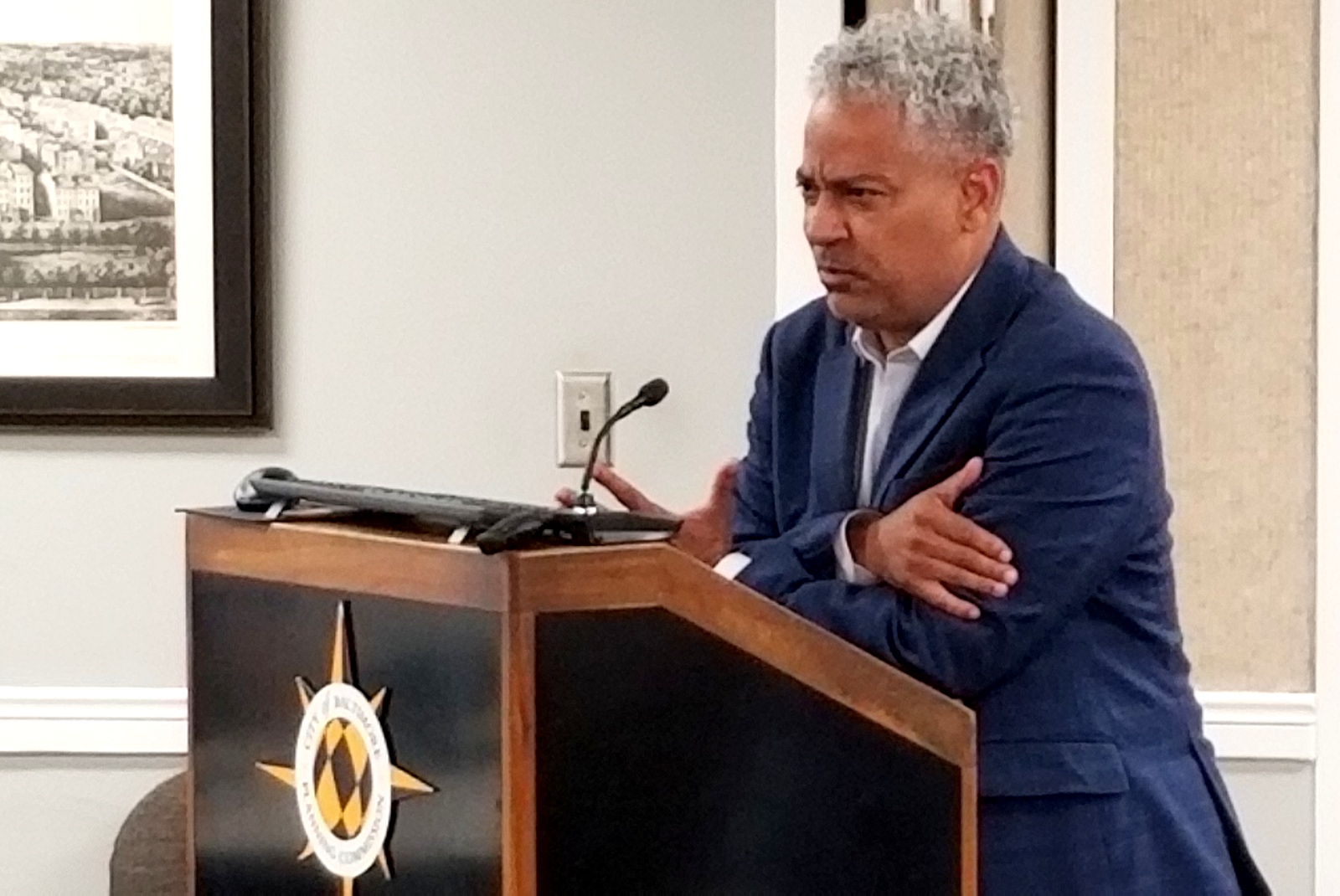 Larry Jennings, of Valstone Partners, was the only person speaking against a historic designation for Woodberry. (Ed Gunts)

Jennings also challenged some of the historic district advocates, saying the buildings at Clipper Mill aren’t pristine restorations, but instead are structures converted to new uses over the years and don’t look the same as they did decades ago.

“This whole process, in our opinion, is just a stall tactic to slow down development,” he said, causing CHAP Chairman Tom Liebel to warn him not to characterize the intentions of members of the community. “We’re not here for that type of hearing,” he said.

Liebel also noted that the preservation commission already has experience with creating a local historic district in a section of the city that had PUD zoning districts already in place, Fells Point.

According to CHAP staffers, Fells Point contained several PUD districts before it was designated a CHAP district, including Brown’s Wharf, Union Wharf and a PUD for a group of properties along Broadway. 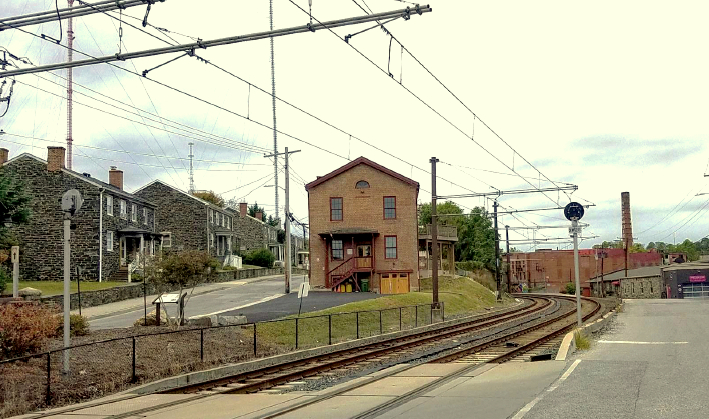 Woodberry as seen from the Union Avenue crossing of the Light Rail line. (CHAP)

Other speakers took issue with Jennings’ characterization of the community’s motives.

Nathan Dennies, chair of the Greater Hampden Heritage Alliance, added that the community isn’t opposed to adaptive reuse projects that fit in with the historic character of Woodberry.

If these parties agree to the plan, he said, the historic designation could take effect by next spring.