A developer has appealed a far-reaching decision that found Baltimore County’s sewers in and around Lake Roland unable to handle waste from the ongoing construction of new apartments and commercial space in Towson.

On August 30, Administrative Law Judge John E. Beverungen ruled that the Bluestem apartment-retail complex along Falls Road could not proceed because it planned to tap into a county sewer “interceptor” line already over capacity.

Smith, Gildea & Schmidt, representing Vanguard Commercial Property and Leonard Weinberg, Bluestem’s developer, argued in a brief filed earlier this month that the law judge “exceeded [his] statutory authority and jurisdiction” by not relying on the county’s assurances that sewage from the new project posed no problem. 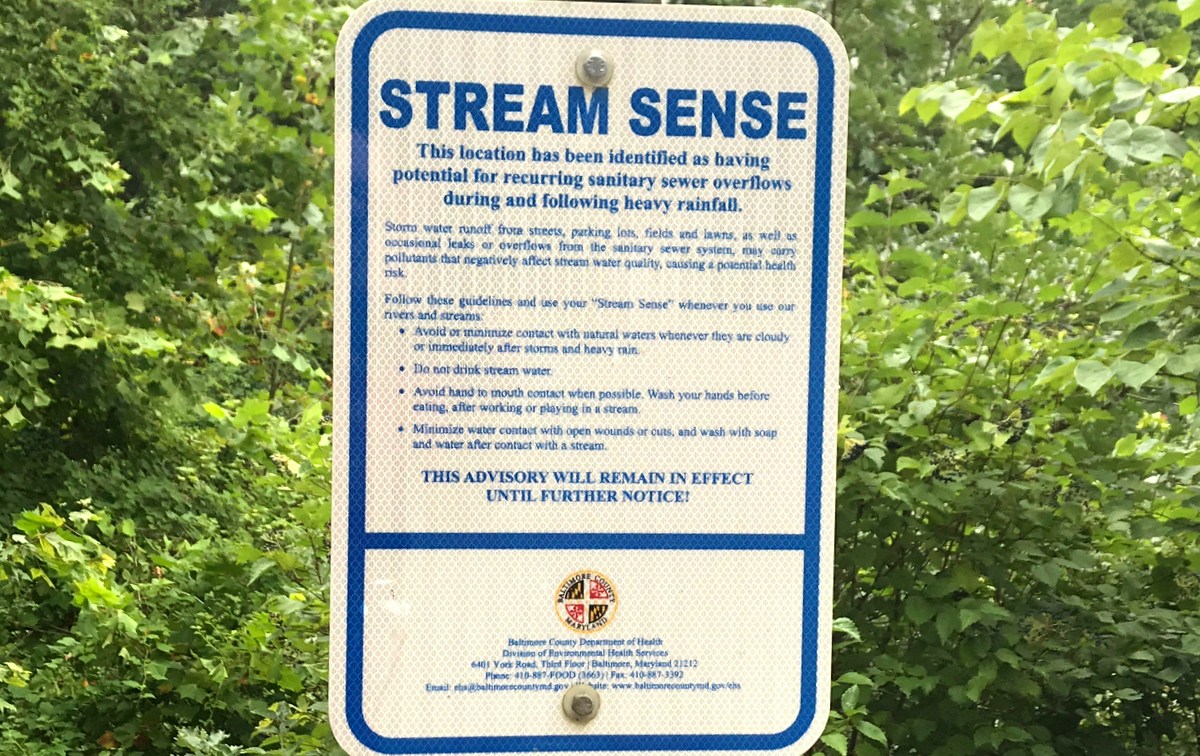 Warnings of potentially polluted water are posted around Lake Roland Park by the county health department, which consistently finds high bacteria counts in water sampled from the lake. (Mark Reutter)

Beverungen, a career county attorney who retired the day of his ruling, took the unusual step of questioning the Basic Services Map, which typically determines if a project wins approval.

He said the county was “reticent” to acknowledge the map inaccurately excluded Bluestem from a sewer deficient designation because prior county administrations were committed to large-scale development around Towson.

Beverungen also disregarded the testimony of Joseph Venturina, a reviewer for the Department of Permits, Approvals and Inspections, who said he did not have “any issue” with sewer capacity in the Bare Hills area.

Instead, Beverungen cited a report by the county’s sewer consultant, RK&K, that found both overcapacity and more than 500 deficiencies in the Lake Roland interceptor pipe, which was completed in the mid-1950s.

His ruling stressed that neither Vanguard nor any other party contradicted the RK&K report or other testimony regarding the deficiencies of the current pipeline.

The County Board of Appeals has scheduled a November 21 hearing to review Vanguard’s request to overturn the ruling and let the project – 150 apartment units plus 56,000 square feet of retail and office space – proceed at 6241-47 Falls Road.

The issue of sewage overflows at Lake Roland is not theoretical. The interceptor pipe underwent a significant “blow out” sometime on or before August 9.

Scattered debris and a damaged manhole stack were discovered by a member of Green Towson Alliance a wooded area south of the park’s dam and nature center – the very spot pinpointed by RK&K as the most likely location of a sewer overflow.

After The Brew reported on the incident, the county acknowledged the overflow, cleaned up the site and rebuilt the manhole.

Green Towson Alliance has repeatedly pressed Steven Walsh, director of DPW, to be more transparent and to follow RK&K’s recommendation to build relief sewers in Lake Roland Park and downstream. So far, Walsh has made no commitments to make any changes to the status quo.

Developers have taken the position that if more infrastructure is needed, the county would have built it – hence, the importance of the Basic Services Maps showing no “sewer deficient” areas.

The citizens’ group also argues that ongoing apartment and commercial construction, such as Towson Circle and Towson Row, will place heavy demands on the county’s water and sewer infrastructure.

Developers have taken the position that if more infrastructure is needed, the county would have built it – hence, the importance of the Basic Services Maps showing no “sewer deficient” areas. 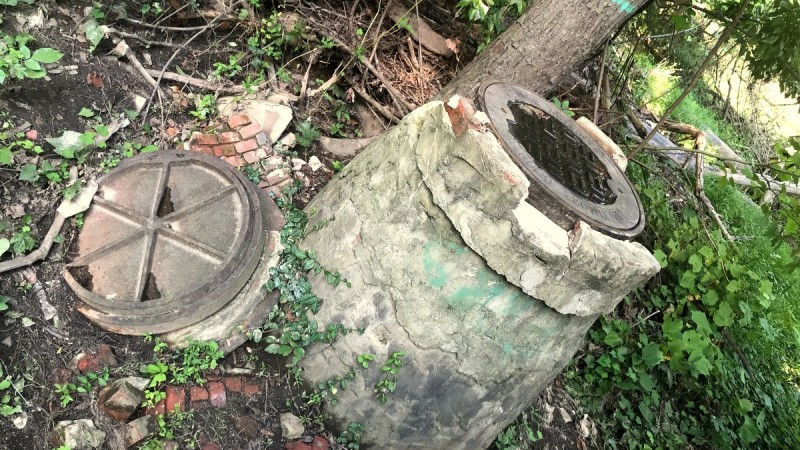 Damaged Manhole 6883 after sewage exploded from the stack in August. (Mark Reutter)

So far, Baltimore’s leadership has not weighed in on the impact of county development on its own sewer system.

Baltimore takes the county’s waste through its own aging pipes. Much of the sewage goes down a large interceptor pipe in the Jones Falls Valley and then eastward under Fleet Street and Eastern Avenue to the Back River Wastewater Treatment Plant near Dundalk.

To avoid backflows into city houses and businesses, excess sewage in the pipes is released into the Jones Falls during heavy rainstorms.

The stream carries the wastewater to the Inner Harbor, where it meets and mixes with bay water next to the posh waterfront addresses of the Baltimore Marriott and Four Seasons Hotel.