Efforts by Baltimore City and BGE to dismiss a lawsuit alleging that a pipeline franchise they entered into was illegal were rebuffed by a Baltimore Circuit Court judge.

“Under the facts alleged in the complaint, the court finds that the plaintiffs sufficiently alleged that the [correct] procedure was not followed as required under the city charter,” Hong wrote.

At issue is BGE’s use of public land in Leakin Park for a natural gas pipeline, the subject of a number of Baltimore Brew stories.

The construction, completed early this year, resulted in the removal of 700 mature trees (trees with a diameter of eight inches or greater) and changes in land elevation that will negatively impact forest and stream health.

Overall, the Baltimore Department of Recreation and Parks gave a “conservative estimate” that 2,800 park trees will be “lost” because of the pipeline.

FOGFLP wants the city to scrap the franchise deal and renegotiate a pact that better reflects the true impact of the pipeline on what is by far Baltimore’s biggest park (at 1,216 acres, nearly twice the size of Druid Hill Park) and one of the largest protected wilderness urban parks in the nation.

• Is BGE pipeline price a sweetheart deal between the utility and the Pugh administration? (2/28/19)

In September 2017, the Board of Estimates, which included then-Mayor Catherine Pugh and City Council President (now mayor) Jack Young, allowed BGE to clearcut a 50–75-foot wide right of way across 2.2 miles  to replace an old pipeline built on a different alignment.

The FOGFLP lawsuit alleges that the board violated the city charter by granting construction rights to BGE before determining a franchise fee – the fee was left blank in the original signed document, The Brew has reported.

The suit also charges that BGE was given rights to the parkland “in perpetuity” instead of the charter-prescribed limit of no more than 25 years. 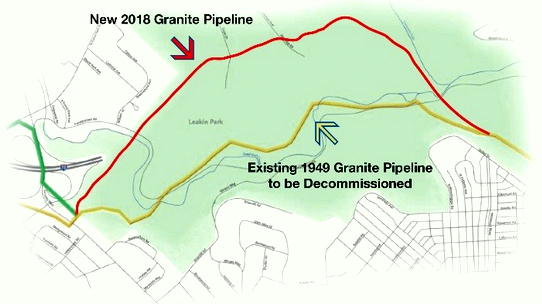 Known as the Granite Pipeline, the line carries natural gas to Baltimore City. The original pipeline followed Dead Run and Franklintown Road. The new alignment was routed to higher ground through a dense park forest. (BGE)

“We believe the process was legally flawed and the monetary value of the 12.23 acres of former parkland is worth far more than what the city agreed to behind closed doors,” said Jack Lattimore, a member of the FOGFLP board of directors.

The Baltimore charter says it is “the duty” of the Board of Estimates to fix a franchise fee “at the largest amount it may be able to obtain” (Article VIII, Section 2).

An independent, third-party valuation of the public land taken for the pipeline was never conducted. 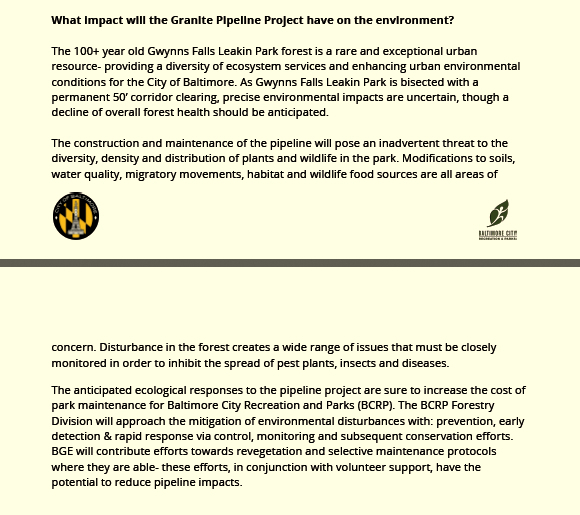 A 2017 Forest Management Plan, prepared by Biohabitats, Inc., identifies more than $17 million of work needed simply to maintain Leakin and Gwynns Falls parks against continued environmental stresses over the next 10 years.

The city argued that the group’s lawsuit, filed last April, was “moot” because an ordinance granting the franchise was eventually approved by the City Council and Board of Estimates.

That ordinance required BGE to pay a franchise fee of $1.4 million – one tenth of the $14 million recommended by the staff of the Department of Parks and Recreation, according to FOGFLP.

City Solicitor Andre Davis also contended that the 2017 agreement approved by Pugh and Young was not a franchise agreement but rather a construction agreement.

Judge Hong dismissed these and three other objections made by the law department and BGE.

“We look forward to our day in court,” Lattimore said today.