A coalition of community and environmental groups are urging Baltimore County Executive Johnny Olszewski to place a moratorium on building permits in areas of the county that have inadequate sewer capacity.

In a letter delivered Friday to the county executive, 18 community associations and an umbrella environmental group point to an administrative law judge’s decision that a major sewer line under Lake Roland is “woefully inadequate” to handle existing demand, much less new development proposed at Bare Hills, Towson and elsewhere.

“We are concerned that new development will be permitted that will add sewage to an already overloaded system,” says the letter, which was obtained by The Brew.

“This is a serious public and environmental health threat. . . We ask you to fulfill your campaign promise to protect our open waters, our health and our quality of life.”

The inadequacy of the 65-year-old “interceptor” sewer under Lake Roland (which, in turn, feeds into Baltimore City’s own frequently overflowing sewer line in the Jones Falls Valley) took center stage when the county reluctantly conceded that a major sewage spill had occurred at Lake Roland Park in early August.

On August 31, Administrative Law Judge John Beverungen sent shock waves through the county government when he disapproved the development plan for Bluestem Village, a proposed apartment and retail complex at Bare Hills, on the grounds that the Lake Roland sewer was already over capacity during storm surges.

Beverungen further ruled that the county’s Department of Public Works – which had designated Bare Hills as having “adequate” public sewage capacity – was contradicted by its own consultant, RK&K, who had found the infrastructure deficient in a report that was not made public for nearly six years.

Although pressed to do so by citizen groups and by an op-ed by David Plymyer in The Brew, Olszewski has not publicly addressed the sewage problem or the alleged coverup of the consultant’s report by the county DPW.

Last month, his chief sustainability officer, Stephen W. Lafferty, promised representatives of Green Towson Alliance that there would be an “independent review” of the Jones Falls sewershed, while providing few specifics. 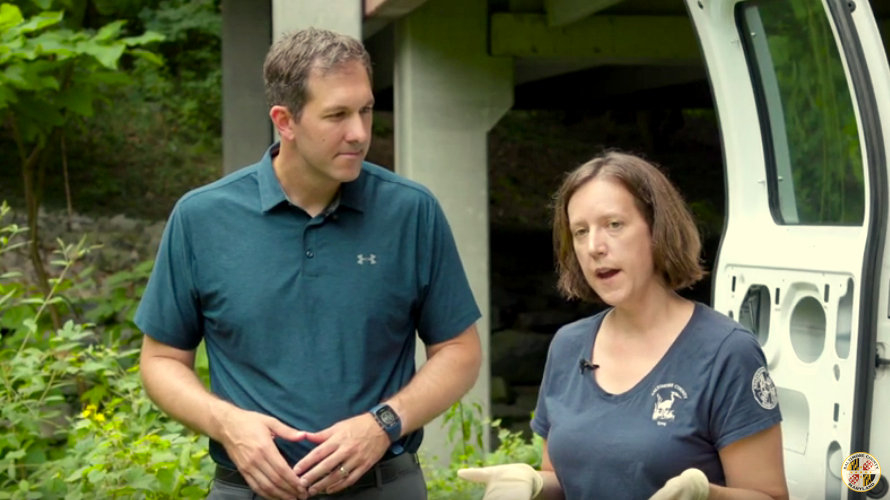 Baltimore County Executive Johnny Olszewski appears as a “water pollution detective” in a recent video produced by the county. (YouTube)

The letter asks Olszewski to:

• Fulfill the requirements of a consent decree the county first signed with the Environmental Protection Agency (EPA) and Maryland Department of the Environment (MDE) in 2005. One aspect of the agreement is a recommendation by RK&K to build a new sewer line at Lake Roland.

• Ensure that the Basic Services Maps, prepared by DPW and approved by the Baltimore County Council, “accurately reflect all deficient sewersheds, watersheds and traffic sheds.”

• Impose a moratorium on issuing building permits “unless and until the Basic Services Maps are corrected.”

• Require county agencies to document that adequate sewer, water and transportation capacity exists before approving new developments and to make their evaluation process “readily available to the public upon request.”

Full Text of the Letter 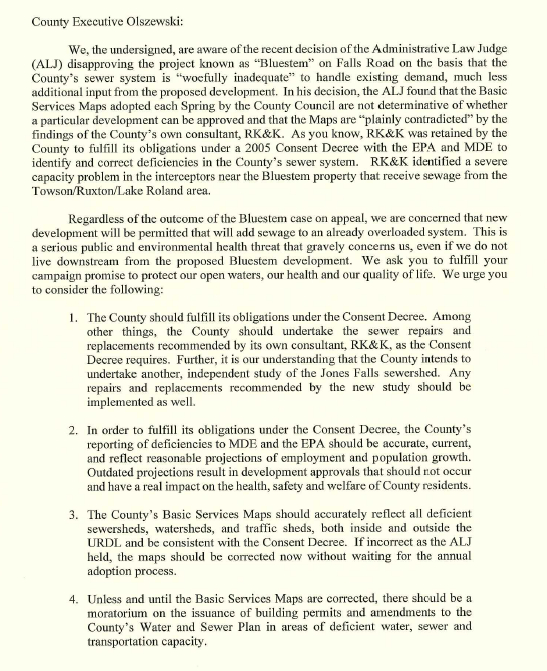 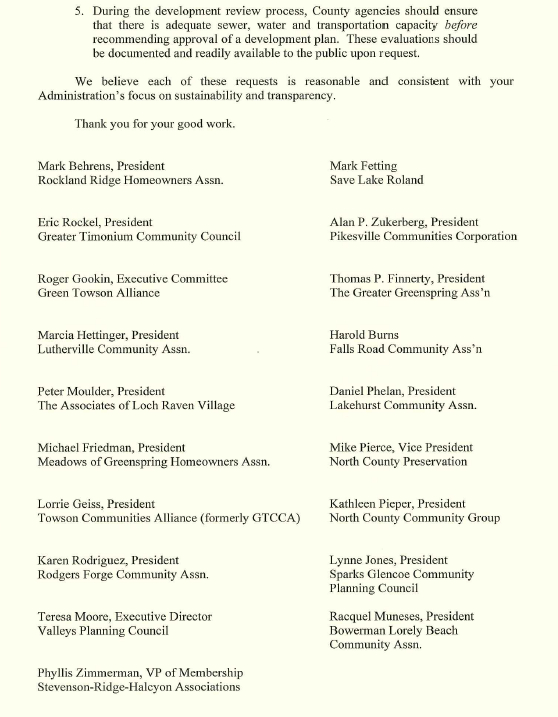