When he sat in the U.S. judiciary’s upper echelon as a federal appeals court judge, Andre M. Davis employed the lofty language of the law, issuing rulings that only a handful of fellow jurists could question.

In the final months of his short stint as Baltimore’s city solicitor, Davis was down in the lowlands of local politics, decrying his critics in public meetings and getting salty on social media.

Parrying charges that he is hurting efforts to curb police misconduct, he was one minute saying that the ACLU “should be ashamed of themselves” and the next posting articles on Twitter and arguing with anonymous critics about their unfair “pushback.”

And when the City Council passed a bill banning police victim “gag orders” – only to have Davis say he would not enforce the new law – some wondered if Baltimore was about to experience its own constitutional crisis.

Now following last Thursday’s announcement that he plans to resign, Davis has been cutting loose on Facebook, challenging commenters who are blasting not only his actions but his attitude.

“What exactly is the ‘degree of arrogance’ that you find off-putting. 40%? 55%? 75%?” he demanded of one critic on the Baltimore Voters Facebook page.

Responding to another, Davis offered his version of the Civilian Review Board controversy during his tenure, calling out state Senator Jill P. Carter by name, referring to her supporters as “henchmen” and describing her prior leadership of the police accountability panel as “deeply flawed.”

Carter, now a 7th Congressional District candidate, fired back in detail with her version of events, accusing Davis of “condescension and bullying” and throwing her own shade.

“Not only have I moved on, but I’m busy! Where he now has no job, I have four: senator, lawyer, professor, candidate,” she wrote in a Facebook post. “I will make this as brief as possible as I must get dressed for a gala.”

Even Davis’ wife, Jessica Strauss, has chimed in: “He is the greatest public servant this city and state have ever known,” she declared on Facebook.

The dialogue got even more raw, prompting Davis’ wife, Jessica Strauss, to chime in, condemning as “despicable” the speculation by some that her husband’s departure might be connected to the corruption scandal that brought down Catherine Pugh, the mayor who hired him in 2017.

“He is the greatest public servant this city and state have ever known, one of the most scrupulous and spotless from the point of view of integrity, laser focused on YOUR well being and YOUR safety,” Strauss wrote on Facebook.

“Not all public servants are criminal,” she chided.

(NOTE: Some of the Facebook comments described in this story appear to have been deleted.) 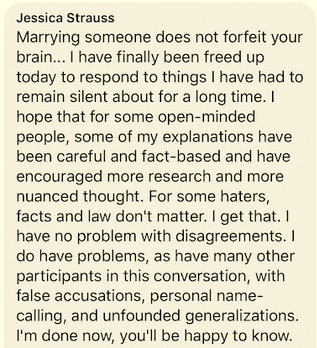 Sharp-eyed Baltimore Twitter was the first to note that Davis, who had said he was leaving because he’s “run out of fuel,” seemed to have more in the tank to burn. 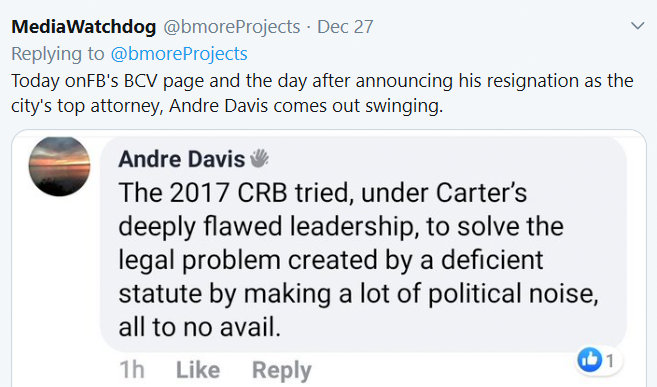 The rancor as Davis leaves City Hall contrasts sharply with the praise he garnered on his way in.

Boasting a three-decade career as a federal judge, including an appointment by President Barack Obama to the 4th Circuit Court of Appeals, the East Baltimore native, now 70 years old, was lauded as one of the Pugh Administration’s best “gets.”

He started work in September 2017 and soon came under fire in a number of high-profile battles – mostly over issues relating to police misconduct.

One that dragged on for months was Davis’ war with the Civilian Review Board (CRB), the citizen panel that reviews police brutality and abuse allegations.

When board members refused to sign confidentiality agreements that the law office had drafted, Davis stopped sending them cases to review, prompting the board to hire its own lawyer and file suit.

Members complained that Davis and Pugh were trying to undermine their work by moving the once-independent agency that oversaw them, the Office of Civil Rights and Wage Enforcement, under the authority of the solicitor’s office.

Davis, they said, had an inherent conflict of interest because he was charged with defending both police officers and the board reviewing officers’ conduct.

Davis eventually backed down on the confidentiality issue, and the CRB resumed its work. But the conflict was prolonged by an ethics complaint that Davis filed against the private attorney who had briefly represented the board.

(The attorney was cleared, and Davis’ act was criticized by many as petty retaliation.)

Davis called the conflict a “ginned-up public dispute” by “rogue members” of the review board out to “embarrass” Pugh and to lash out at him for having told Carter that, under ethics rules, she could not serve as both a state senator and the $120,000-a-year head of the Office of Civil Rights.

Time and again, Davis made headlines over actions he said he took to follow the law, but that others saw as siding with politicians and the police over the interests of the overall public.

Earlier this month, Davis defended the use of a master lease contract to lease communications and other equipment through a company owned by J.P. Grant, who figured prominently in the tax evasion and conspiracy conviction of Pugh.

(Federal prosecutors named the Columbia businessman as a “Healthy Holly” book buyer who gave Pugh $150,000 to help fund her political campaign and buy a new house. “They’re just allegations,” Davis said in response to the financial transactions between Grant and Pugh laid out in a “Stipulation of Facts” signed by the former mayor.) 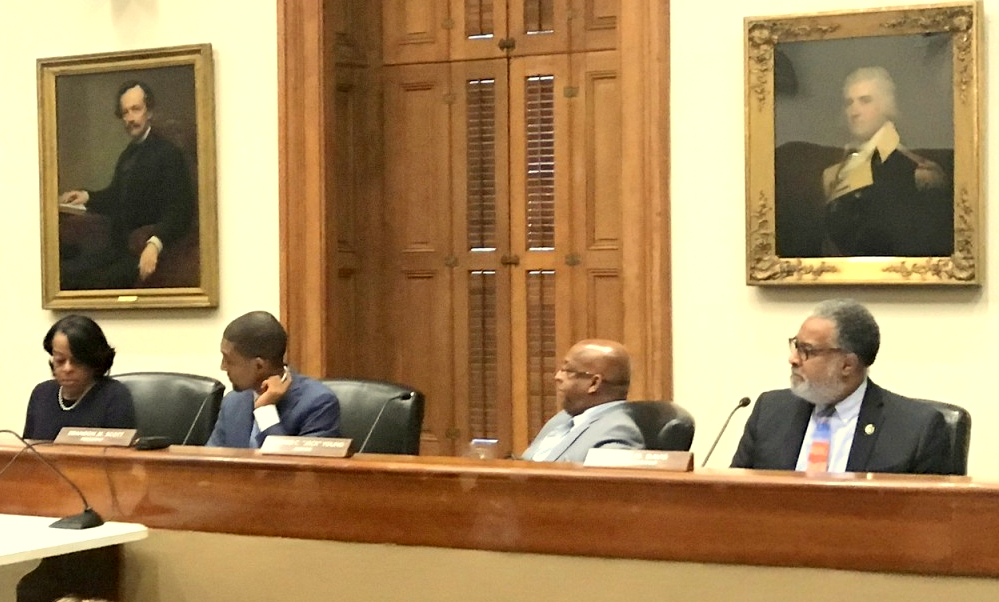 In another case, Davis fought hard against both a federal lawsuit and a City Council bill aimed at ending Baltimore’s policy of requiring police misconduct claimants to sign non-disparagement agreements (often referred to as “gag orders”) in order to receive a cash settlement.

Davis personally represented the city when the lawsuit came before his former colleagues the 4th Circuit, the court he had retired from 19 months earlier. (The suit was filed by the ACLU of Maryland on behalf of claimant Ashley Overbey and this website, Baltimore Brew.)

ACLU’s Rocah: “He seems to forget who his clients are – the mayor and City Council as elected representatives of the people of Baltimore.”

Davis cited the “reputational cost” to the officers named in her lawsuit and the harm that unrestricted speech by plaintiffs would cause to the Baltimore Police Department’s effort to recruit officers.

Even after the 4th Circuit struck down gag orders as unconstitutional, Davis has continued to fight about it with lawmakers and the ACLU.

Amid confusion over whether the city was or wasn’t still using gag orders, Davis attacked the City Council bill barring the practice, arguing that the City Charter places the solicitor “in sole charge” of litigation.

Not so, declared ACLU senior staff attorney David Rocah, who offered this assessment of Davis at a City Council hearing:

“Yes, he is the city’s lawyer, but he seems to forget who his clients are – the mayor and City Council as elected representatives of the people of Baltimore.”

“He’s a good man representing his client, the city,” lawyer Jim Astrachan wrote on Facebook. “I think he can’t do it anymore (and has said to himself  ‘there is some sh-t I will not eat.’”)

Opposing a bill that the Fraternal Order of Police pushed in Annapolis to expand the scope of labor arbitration, Davis incurred the union’s wrath by declaring that the FOP has a “chokehold” on the city.

Police critics, meanwhile, faulted his efforts to limit the city’s liability in a flood of pending lawsuits over the actions of the department’s corrupt Gun Trace Task Force (GTTF).

The officers’ conduct was so far outside the scope of their duties, Davis has said, that an agreement with the police union to cover the costs of lawsuits should not apply.

Preemptively limiting the city’s exposure in that way, he acknowledged, would discourage people from suing – an outcome critics said would hurt the GTTF’s victims and stifle reform.

Davis’ response, on WYPR’s Midday with Tom Hall,  was that the city has “a moral imperative” to determine who deserves compensation.

“I’m not interested in trying to reimburse drug dealers for their stolen drugs,” he said.

In May, a Circuit Court judge considering the issue ruled against Davis, who has said he will continue to represent the city on the matter ahead of his resignation’s effective date, March 1.

Davis’ departure is the latest sign of the disarray in Baltimore government since the “Healthy Holly” book scandal hit City Hall.

A parade of senior administrators has left since Pugh resigned in disgrace and Young became mayor, including:

Frank Johnson, Baltimore’s IT chief during the ransomware attack; Rudy Chow, the city’s embattled Public Works director; Ganesha Martin, director of the Mayor’s Office of Criminal Justice; Peter Hammen, ex-chief of city operations; and Karen Stokes, the ex-director of government affairs who was fired by Young soon after he took over.

Others who left during the interregnum when Pugh was on leave of absence:

Increasingly, there were signs that the turbulence was weighing on Davis.

At a September meeting of the Board of Estimates where he sits as a member, he seemed to take criticism of his stance on gag orders personally.

“There are certain people out there who think that the way you get what you want is to beat up on somebody, to disparage the city, to bring people down,” Davis said.

He went on assert heatedly, “Anyone can lie anytime they want. And anyone can be called a liar, as I have been called a liar by the ACLU” – an outburst that elicited a rebuke by the editorial advisory board of The Daily Record.

Recently, he pushed back when a post of his that linked to an article about black youth suicide drew widespread condemnation on Twitter. 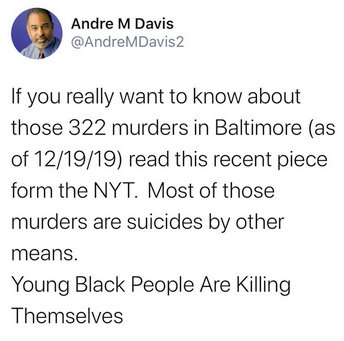 “If you want to deny the root causes of why so many African American young men 16-28 kill each other in our City you have that right,” he replied.

On Facebook, his wife urged commenters to read the piece.

“The whole point of the article and his posting was for us to recognize that these boys and young men need support not incarceration,” she wrote. “He was championing those boys.”

Whatever his intentions, the post came off as tone deaf – or, worse, as victim blaming – in a city battered by another year of record-setting homicides and struggling to find a way to end the misery, be it through root-cause remedies, smarter policing strategies or a clean-sweep BPD reboot.

In any event, Davis deleted that post, and within days his departure from City Hall was announced.