Who is responsible for shutting the media out of a meeting last night to select a replacement for Cheryl Glenn, the Maryland delegate who resigned after being charged with accepting bribes?

Baltimore City Democratic leaders said it was the decision of the non-profit group in whose American Brewery building on Gay Street the meeting was held.

But Humanim says it didn’t happen that way.

Karenthia A. Barber told Baltimore Brew, upon ejecting its reporter, that she was responding to a phoned request yesterday from a Humanim official asking her to do so.

Facilities manager Candace Baxter “did communicate with Karenthia Barber last week, as she often does, to discuss the schedule for future Central Committee meetings this year,” Humanim spokeswoman Jennifer Braudaway wrote in an email today to The Brew.

Humanim makes meeting space available to multiple community, government and civic groups – including for the past two years the Central Committee – with no restrictions on media access.

The Central Committee has routinely livestreamed these meetings and allowed reporters to cover and livestream them, including Hassan Giordano of DMV Daily news.

So did Baxter say anything to Barber to suggest some new concern about press coverage last night?

“Beyond the conversation about scheduling, there was no discussion about the media,” Braudaway wrote.

She said the group’s only policy on media is that organizations using their facilities inform Humanim when media will be attending events in one of their buildings.

“We ask that because of privacy concerns. People receive a variety of services in our facilities and we are bound to
ensure their privacy,” she explained.

Humanim said it did not create the signs that said last night, “No Media, No Livestreaming.”

Even some 45th District Committee members were surprised to see The Brew escorted from the room and other  media barred for a time from observing the meeting.

“It was kind of odd. It makes no sense. I didn’t really understand it,” said Central Committee member Antonio Glover, noting that the committee had livestreamed past meetings in the Humanim building and had reporters present.

He hastened to say he was not privy to whatever conversations party leadership may have had with Humanim.

Closing the meeting to the press clearly “violated the bylaws” in the view of Odette Ramos, a former chair of the bylaws committee of the Baltimore City Democratic State Central Committee. 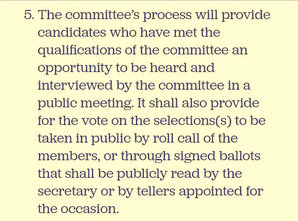 Another aspect of last night’s selection of Chanel Branch is that the 39-year-old daughter of House Majority Whip Talmadge Branch won by a vote of 3-2.

Some have said party rules require the winner to receive 4 of the 7 votes.

Ramos said that is traditionally how it was done.

“The common practice is the new delegate had to have four votes. Multiple rounds were completed until we get four,” said Ramos. “We’ve always done it that way, and I’m not sure why that changed this time around.”

Amid all the next-day criticism about cronyism in Maryland politics, allegations that bylaws were ignored – and statements from Humanim disputing Barber’s version of events – what do Maryland Democratic Party officials say?

They referred a reporter back to city party officials and released a statement from Barber defending herself.

“As Chair of the Baltimore City Democratic State Central Committee, I was responsible for running last night’s meeting,” she said. “The meeting started on time; the process was thorough and structured; all voting members of the 45th District’s Democratic Central Committee were present; and 13 individuals seeking to fill the vacancy were interviewed in a timely and orderly manner.”

Her statement, which sidestepped the fact that members of the media were not present for all of the proceedings, maintained that there was no violation of the bylaws.

“Members of the public and the press,” the statement continued, “were present during the proceedings and watched as Committee Members cast their vote for their desired candidate in accordance with our bylaws.”