Two 45th District residents last night delivered a letter to Baltimore Democratic leaders alleging that the process of filling a House of Delegates vacancy violated party bylaws and calling for a revote.

“I think the process was flawed and change is needed,” said Doris Minor Terrell, president of the Broadway East Neighborhood Association, after handing the two-page letter to Karenthia A. Barber, chair of the Baltimore City Democratic State Central Committee (BCDSCC).

The letter describes half a dozen alleged violations, most related to Monday’s at times tumultuous 45th District Central Committee meeting held to fill the vacancy created by the resignation of Delegate Cheryl Glenn, who is facing federal bribery and wire fraud charges.

Terrell said Barber did not tell her the next steps to be taken on the letter, which asks that Governor Larry Hogan and the Maryland Democratic Party, as well as the BCDSCC, reject the nomination and do the vote over.

Angie Winder: “It’s about the process. It’s got to be fair.”

Barber did not respond to phone calls from The Brew seeking comment.

Terrell said she and the other person who signed the letter, Rita Crews, president of the Belair Edison Neighborhood Association, are circulating it to other 45th District residents and gathering signatures.

Others speaking with The Brew after last night’s monthly meeting of the Democratic Central Committee – held in the same East Baltimore meeting room where the vote at issue was conducted two days earlier – agreed with Terrell.

“There were definite flaws,” said Sonja Merchant Jones, a member of the 43rd District Central Committee.

“It’s not about people or personalities. It’s about the process,” said Angie Winder, who chairs the 43rd District Central Committee. “It’s got to be fair.”

UPDATE: Hogan’s office is his “looking into the letter sent by City democrats,” according to spokeswoman Shareese Churchill. “However the administration has received the official notification for Chanel Branch and has until Jan. 30 to make his decision.”

The first issue addressed in Terrell and Crews’ letter is that the meeting was, at one point, improperly closed to the public.

“The meeting was not open to the public in violation of the bylaws and the Maryland Open Meetings Act,” the letter states.

Barber ejected a Baltimore Brew reporter from the room, which was posted with a taped-up sign that read, “No Media, No Live Streaming.”

Members of the public who came to watch the seven-member committee question 13 candidates for the vacancy were made to wait at the door until a candidate was finished before they were allowed in.

The Brew and another reporter who arrived later were even more restricted. They were barred from the room for nearly an hour until Barber relented and let them in.

“Ultimately the press was allowed to enter but [only] after one-third of the candidates had already interviewed,” the letter says. “Thus, the bylaws were violated since the meeting was not open to the public.”

Bylaws specify that the BCDSCC is “subject to the Open Meetings Act” and that meetings held to fill vacancies must be “open to the public,” the letter writers say. 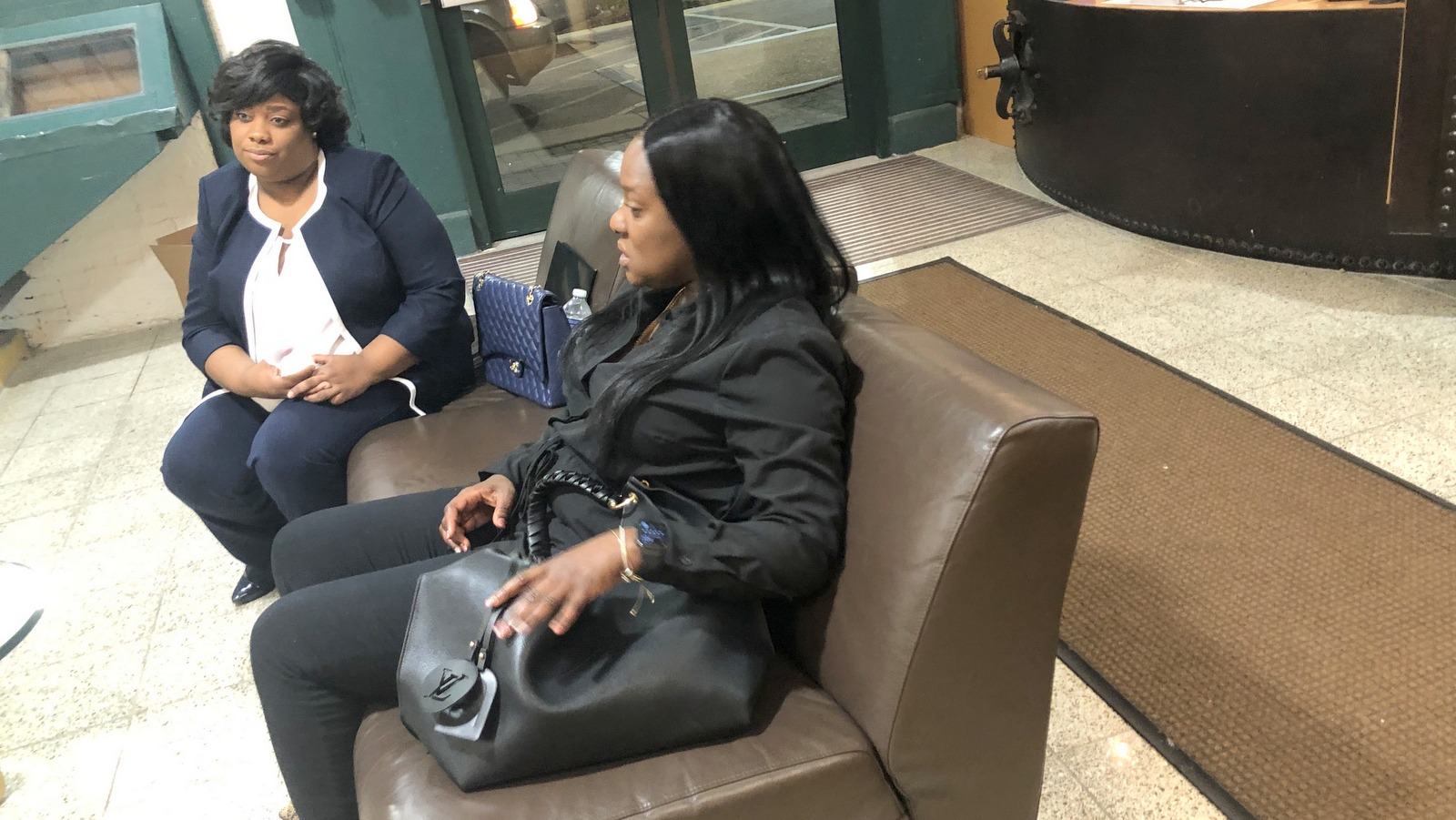 Chanel Branch remained in the lobby while her fellow Central Committee members questioned other candidates for the open legislative seat she won. (Fern Shen)

The letter also challenges a practice in Baltimore that has long drawn criticism – that members of the seven-member committees that fill vacancies may seek those vacancies and vote for themselves.

At Monday’s meeting, the person chosen to replace Glenn – Chanel Branch, a member of the 45th District Central Committee and its chair – voted for herself.

Branch won 3-2 over Caylin Young, casting the tie-breaking vote that gave her a seat in the Maryland legislature for the next three years.

If confirmed she would serve alongside her father, Majority Whip Talmadge Branch, a member of the House of Delegates since 1995.

After appearing first before her fellow committee members to answer their questions Monday night, Branch sat outside the room while 12 other candidates for the vacancy were questioned.

Asked afterwards if it felt awkward to vote for herself, Branch said no.

Chanel Branch: “I was my Number 1 fan. I think I’m the best candidate.”

The letter writers contend that “Branch violated the Code of Ethics by voting for herself without interviewing other candidates.” 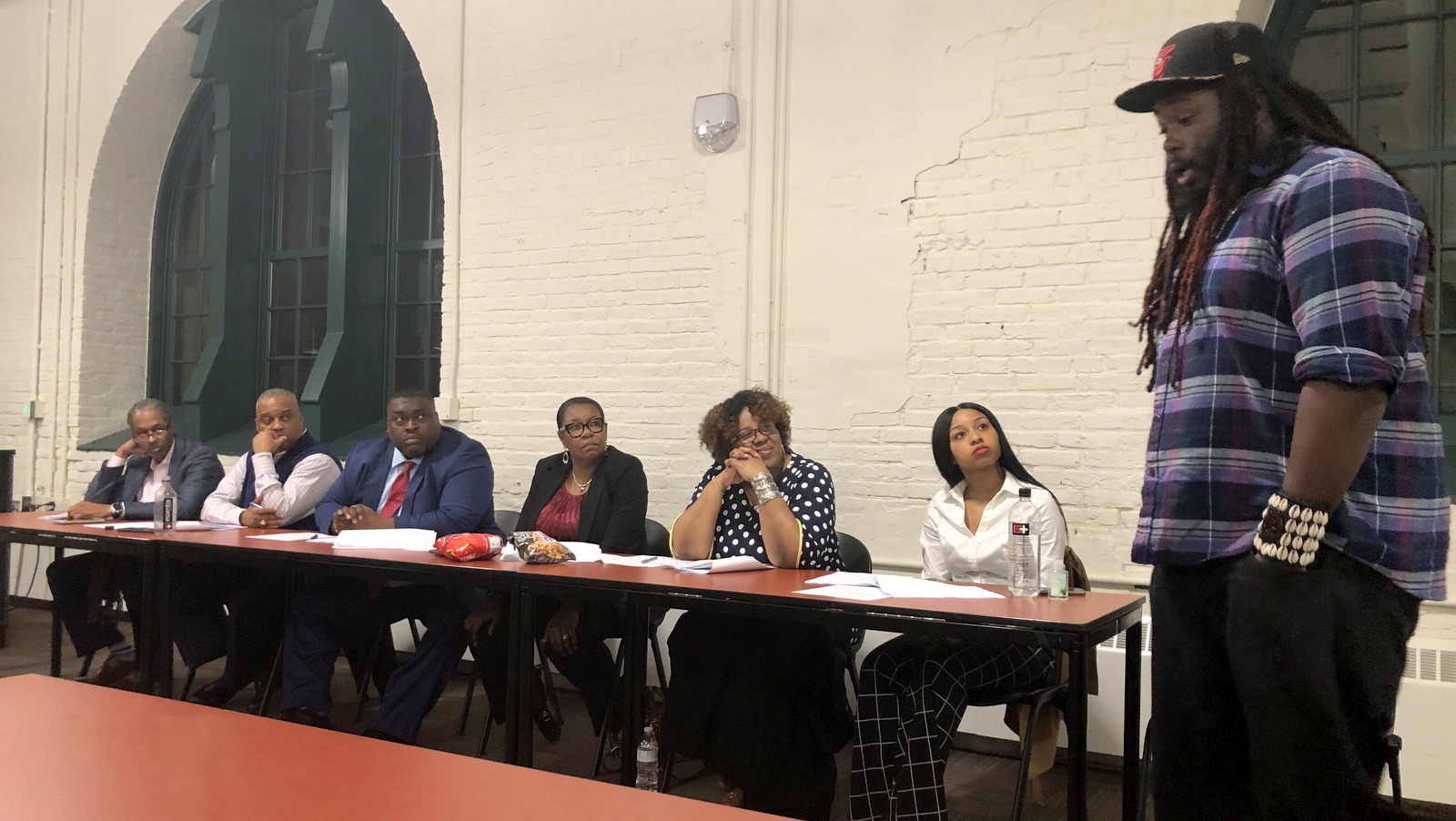 Candidates, including David Fakunle (right), faced six central committee members. Committee chair Branch, herself a candidate, did not sit with the others. (Fern Shen)

“Members shall not use their office to gain special privileges and benefits, and shall refrain from [an] action in their official capacities when their independence of judgment would be adversely affected by personal interests,” the letter says, quoting city and state Democratic Party bylaws.

Terrell and Crews say other aspects of the procedure to be followed for filling a vacancy were not followed properly, including their allegation that the vote was done in secret.

The bylaws permit members to go into executive session to deliberate, but require that voting be conducted in public.

Some who watched the process on Monday say the members emerged from deliberations with ballot sheets already filled out.

Many came to the Humanim building last night, the site of the party’s regular citywide meetings, to see if anyone would speak out publicly about Monday’s selection of Branch.

Barber got to the end of items on the agenda – the treasurer’s report, an update on voter registration initiatives, etc. – and then opened the floor up for comments.

“Anyone?” Barber said, swiveling her head from right to left to scan the crowd

Terrell and others said they were disappointed.

”Nobody wanted to stick their neck out. They all thought someone else would do it.”

“Nobody wanted to stick their neck out,” one person said. “They all thought someone else would do it.”

Even Caylin Young, who acknowledged he is talking to attorney about possibly contesting the vote, was circumspect.

“I’d rather not comment at this point,” he said last night. “I’m still figuring out what to do.”