Two things were clear at the end of a City Council hearing last month on a proposed new parking lot at Druid Hill Park:

Councilman Ryan Dorsey was adamantly opposed to the plan (“a terrible, awful idea”) and other members felt strongly that one of the key nearby communities had not been properly briefed on it.

“There needs to be a presentation to GRIA,” Councilwoman Mary Pat Clarke protested, waving a letter from the Greater Remington Improvement Association asking for the vote to be deferred. “That really needs to be honored.”

Yet even after the Council postponed its vote on the project, the GRIA meeting was never scheduled.

Instead, the Department of Recreation and Parks announced a “community forum” on the Druid Hill Park Aquatic Center upgrade and parking lot plan – to be held on February 19 at their headquarters.

The meeting was scheduled on the same day that GRIA and reportedly other community groups were to hold their regular meetings.

“It felt like the administration was trying to backdoor the Council and the community,” Council President Brandon Scott told The Brew yesterday.

A member of the BOE, Scott said he asked for the item to be placed on the non-routine agenda, allowing for discussion, in light of the questions raised at the hearing and by GRIA’s concerns.

Instead the board, which is controlled by Mayor Bernard C. “Jack” Young and his appointees, deferred the $10.1 million contract. As it now stands, the contract is expected to come before the board again in two weeks.

“The Council president asked for further questions. The mayor led the charge to defer the item entirely with no questions,” Scott’s press aide, Stefanie Mavronis, stated.

Young’s chief spokesman, Lester Davis, has not provided a response to several requests for comment.

Scott and Young are opponents in the 2020 mayoral primary that’s coming up in April.

Outside of City Hall, reaction to the parking lot was overwhelmingly negative, with some taking the city to task for citing the lack of mass transit within Druid Hill Park as a reason to add parking spaces near the expanded Aquatic Center. 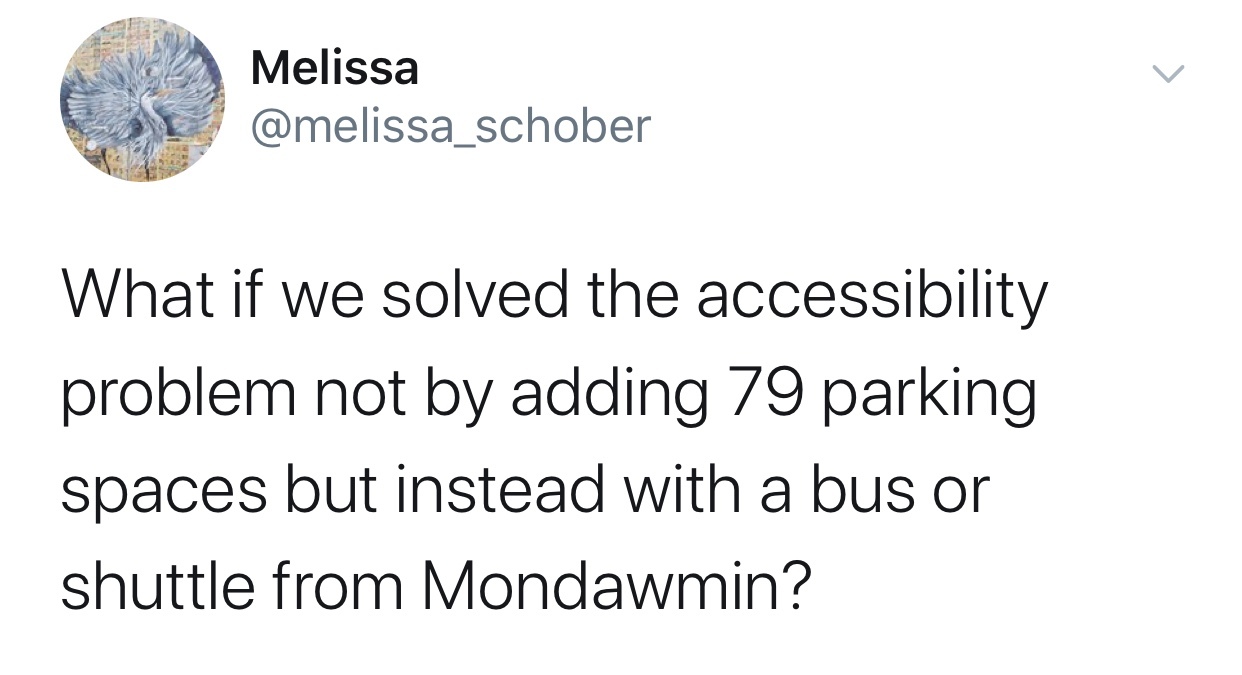 Opposition had been building for days – much it sparked by public artist Graham Coreil-Allen, who has been leading efforts to increase public access to Druid Hill Park through TAP (The Access Project) Druid Hill.

“Serious question: why do private citizens need to ‘organize’ to stop the construction of a parking lot in a park in 2020?” @charmcitylwy asked. “Is city government really that far beyond repair?”

“The general sentiment I’m hearing is people don’t think a new parking lot is the right direction for our most cherished park,” Coreil-Allen said. 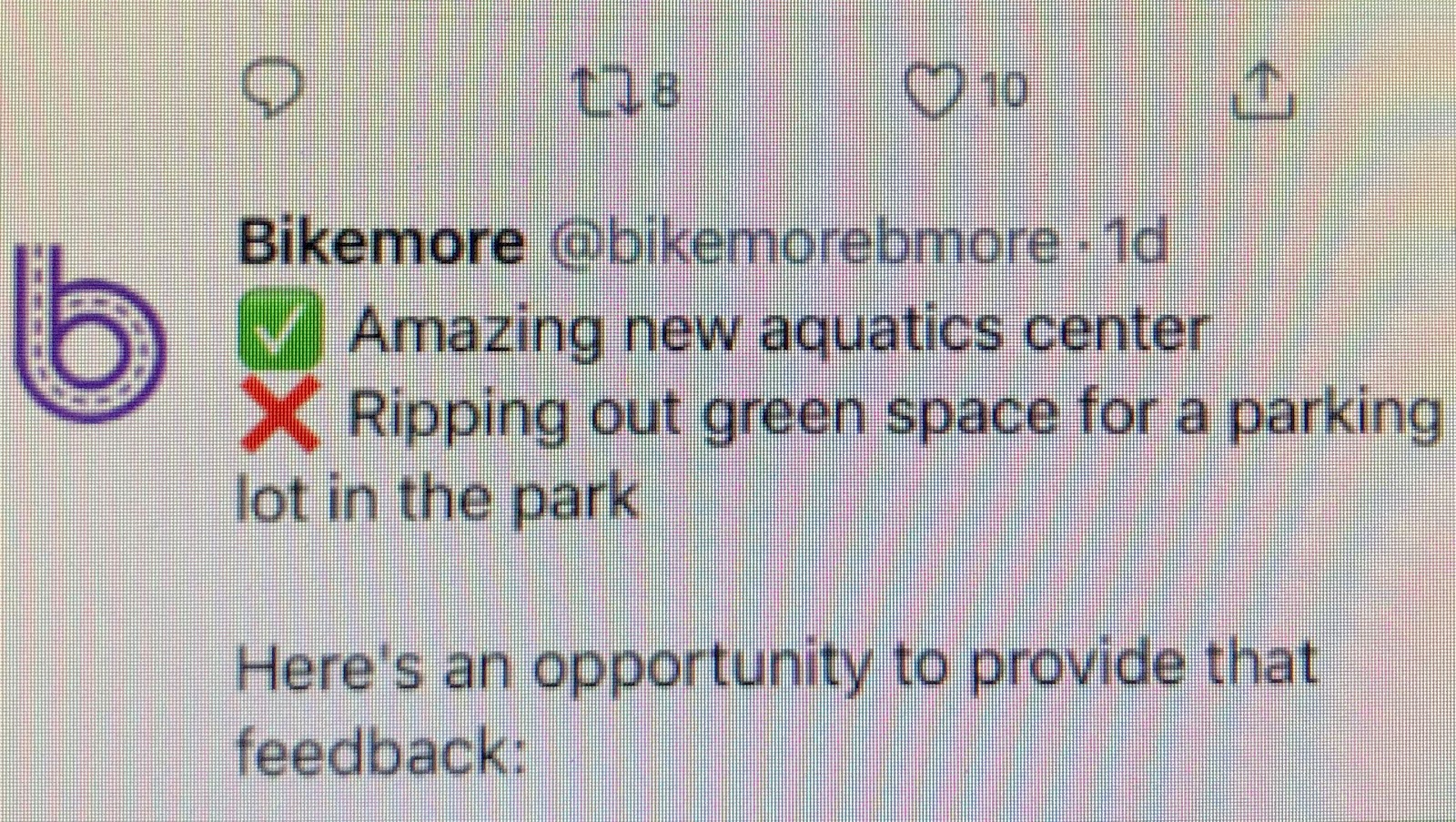 He noted that the community master plan adopted by the Planning Commission calls for improving walking and biking access to the park. While applauding the Aquatic Center upgrade, he believes there are other ways to accommodate additional pool users.

He tweeted, for instance, photos showing existing paved parking at the nearby Stieff Silver and Boy Scouts buildings.

And with commenters suggesting bus or or shuttle access be added to the park instead of parking, Coreil-Allen gave some historical perspective.

“At one time, there were three streetcar lines people could take to get to Druid Hill Park,” he said. “People could then hop on a narrow-gauge railway – tiny trains, basically – that would take them to the Moorish Tower or other places at the park.” 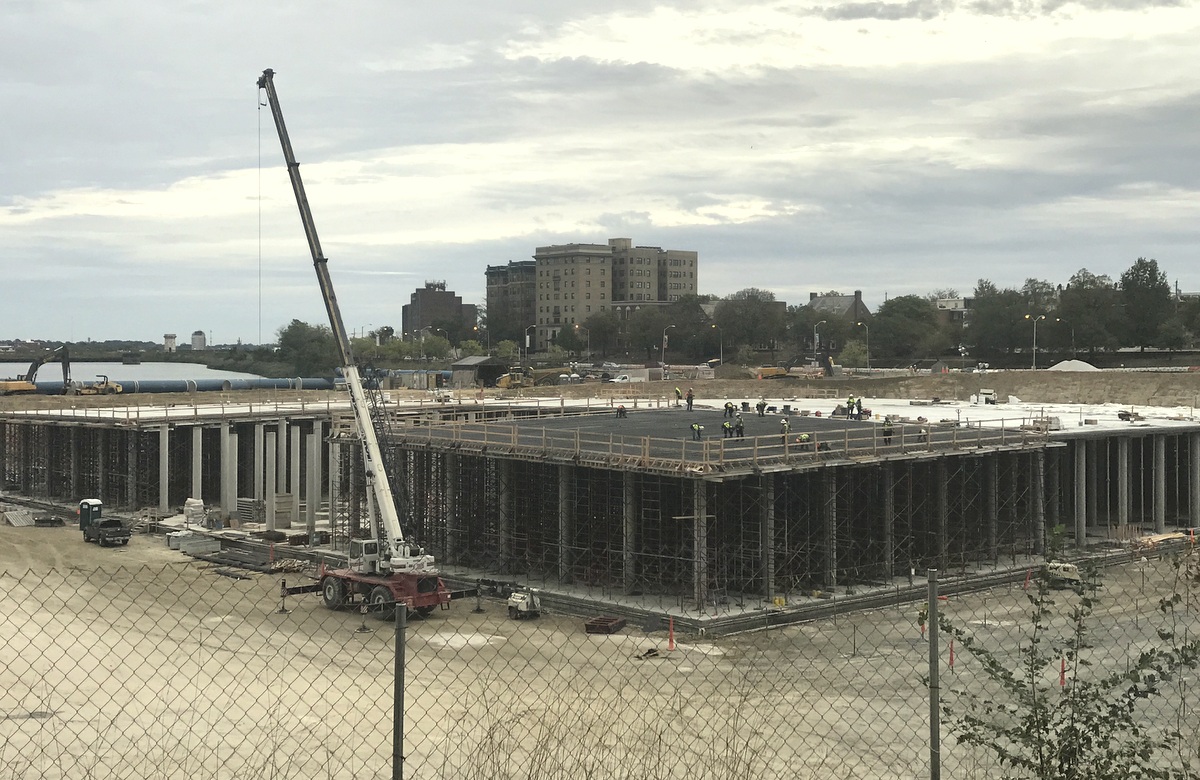 One of two storage tanks now under construction in the footprint of Druid Lake, the centerpiece of Druid Hill Park. The proposed parking lot would be located northeast of the shrunken reservoir seen in the background. (Mark Reutter)

Other parking lot opponents, like East Arlington resident William Washington, have harked back to more recent park history – to “destructive” city decisions, as he called them, such as the construction of water tanks that “cap over part of Druid Hill Lake” reservoir.

“You have 10 lanes of traffic around the park at Fulton and Auchentoroly and McCulloh,” Washington said at last month’s hearing, referring to the roadway construction added to the northwest side of the park a half century ago.

“I mean, that’s almost as many lanes of travel as you have at the US 70 /695 interchange. That makes the park prohibitive for use for the nearby communities,” Washington said.

Encouraging car traffic near the park “has proven to be very destructive to the community,” he continued. “There’s a lot of blight. There’s been a lot of violent crime.”

The parking lot proposal “is just part of a series of decisions that have been destructive to the park,” he concluded. 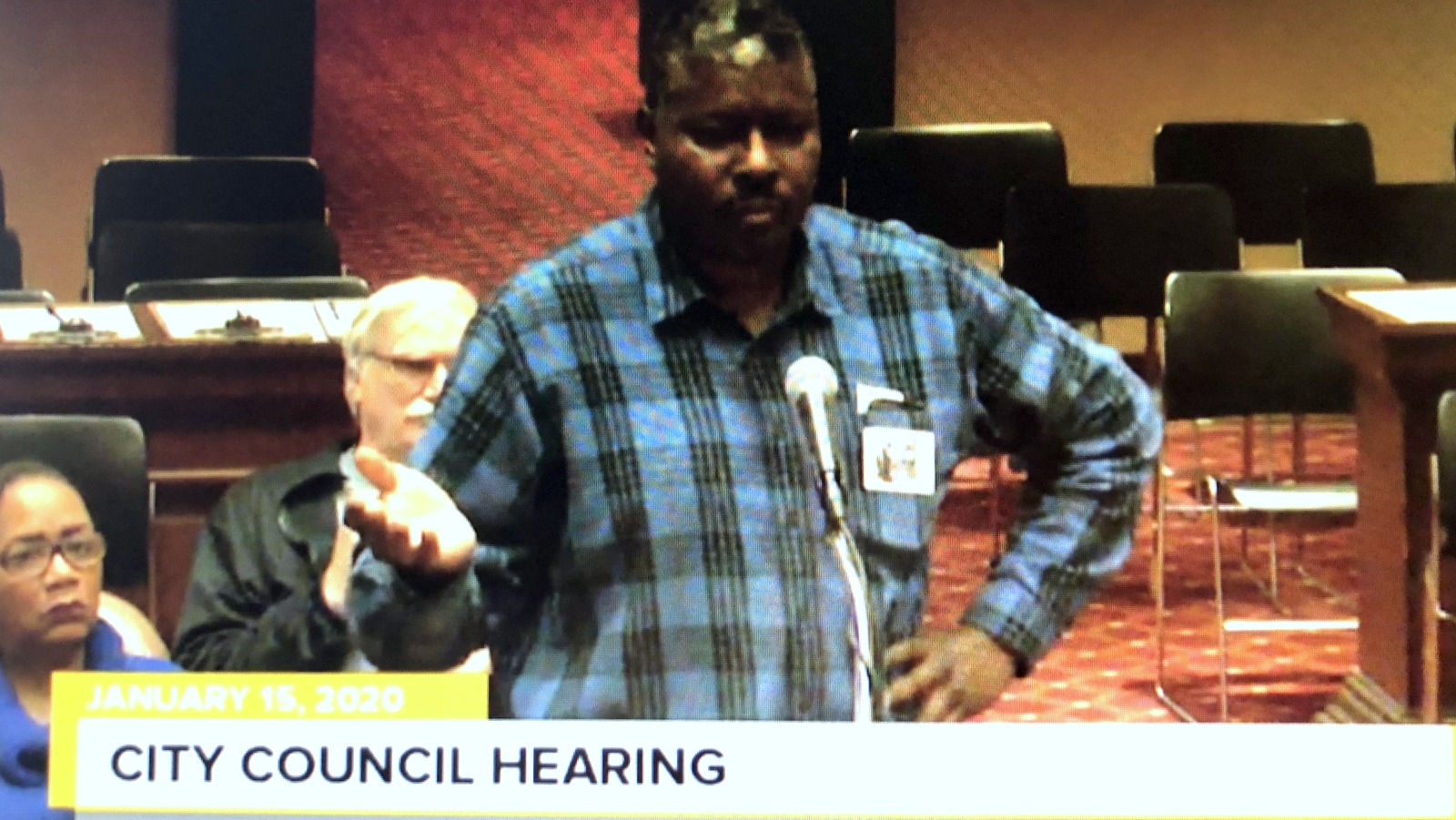