Unexpected encounters with rock and water have added $2.4 million to the price tag of the Harford Road Bridge – and more cost overruns aren’t being ruled out by the city Department of Transportation.

The latest, and by far the largest, group of “EWOs,” or extra work orders, were approved last week by the Board of Estimates to Technopref Industries, the U.S. subsidiary of France’s Demathieu Bard.

The overruns will pay for two construction items not anticipated by the DOT and its high-priced bridge consultant, Whitman, Requardt & Associates. (Earlier EWOs paid to WR&A had pushed up the bridge’s design costs from $1.1 million to $2.6 million.)

“Excessive rock excavation” was the most recent culprit cited by DOT.

Because 125% more rock has been found at the Herring Run bridge site than anticipated by the agency or Whitman Requardt, the contract with Technopref had to be renegotiated.

Those negotiations resulted in the price of rock excavation jumping from $65 per cubic yard to $188 per cubic yard, which added $1,606,930 to the bridge’s cost.

(Technopref originally wanted $212/CY for new rock removal, but DOT says it pushed the price down to $188/CY, which is still three times above the original fee.) 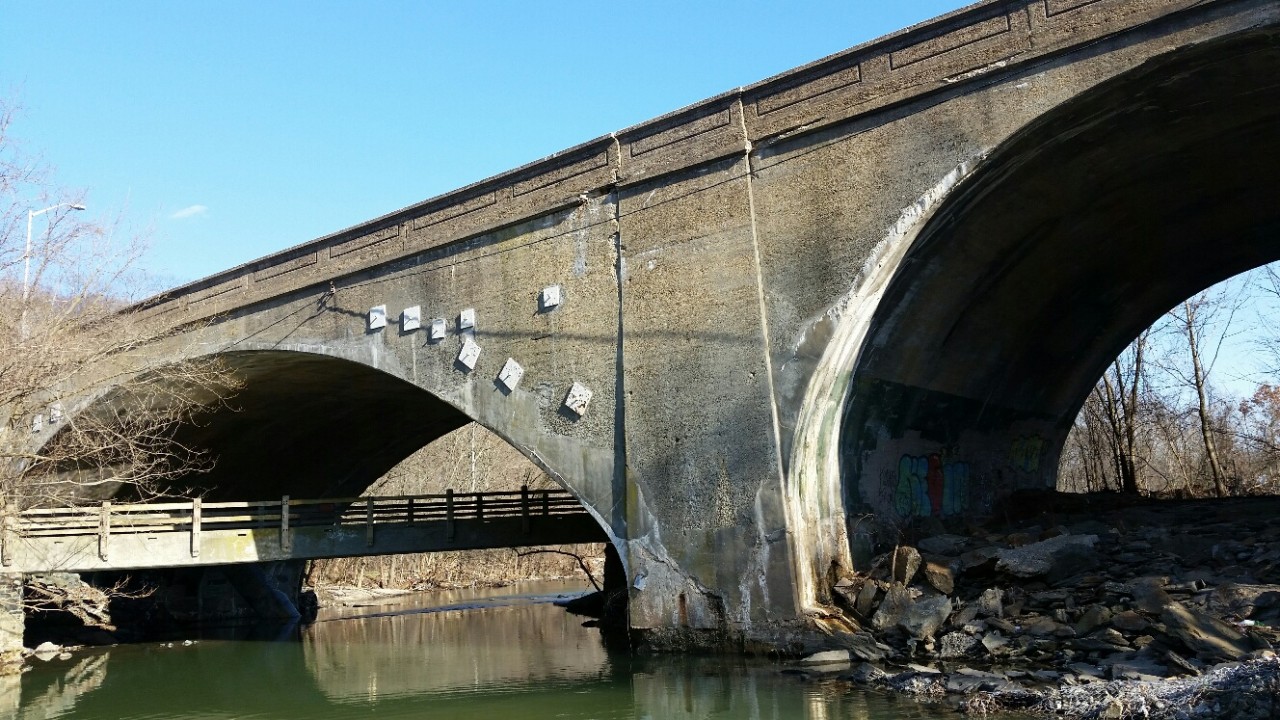 The Harford Road Bridge had badly deteriorated when this photo was taken in 2017, with metal plates and ties holding up the cracked spandrel walls in the middle arch. (Mark Reutter)

This wasn’t the only problem. A DOT-approved design to divert Herring Run around the construction site quickly proved faulty, allowing the stream to jump its banks and wreak havoc during “severe weather events.”

A new stream channel, required so that the foundations can safely be built, will cost $823,908.

The new concrete-girder bridge, replacing a 1911 bridge over Herring Run, was started in November 2018.

Technopref was selected by then-Mayor Catherine Pugh and the spending board as the lowest of five bids.

The bridge is now 15% above its original price of $19 million, and “there is a possibility that we will have to do additional EWO’s that will depend on weather delays and possible unforeseen issues that may arise,” DOT spokesman German Vigil said last week.

The bridge is scheduled to open by the start of 2022, allowing Harford Road to return to its former role as a northeast thoroughfare used by 22,000-plus vehicles a day.

Last week, the Board of Estimates approved another EWO for a bridge project.

Tutor Perini Corp. was paid $1.1 million after it had widened a path in the Gwynns Falls Valley, beneath the Edmondson Avenue Bridge, to accommodate its equipment.

“An Engineer’s Estimate was performed to determine a reasonable cost for the proposed work,” DOT reported to the spending board. “The work was performed prior to board approval in order to ensure public safety.”

Two prior EWOs granted to Tutor Perini had upped the price of the reconstructed bridge by $472,000.