When Octavio Colin discovered that he contracted Covid-19 earlier this month, his mind leapt immediately to the lonely death suffered by a friend who also contracted the disease.

“His whole family was infected, so when he was in the hospital, no one could see him,” said Colin, a 33-year-old construction worker, who came to the U.S. from Mexico when he was 12.

Colin says he has seen for himself how hard the coronavirus pandemic is hitting people like him.

He waited 2½ hours in the line that regularly forms for weekly free tests at Sacred Heart of Jesus in Highlandtown, a mainstay of Baltimore’s Latinx community. His friend who died had been standing in the same line when he passed out and was rushed to the hospital.

A just-published study of Baltimore/Washington-area hospital and clinic patients confirms his impression, finding the rate of infection among Latinx patients tested was nearly five times that of White patients and more than twice that of Black patients.

Diego A. Martinez and six co-authors at the Johns Hopkins School of Medicine analyzed data from nearly 38,000 patients who received nasal swab testing from five Johns Hopkins System hospitals and 30 outpatient clinics between March 11 and May 25.

Another study finding was that the hospital admission rate for Latinx patients was 29.1%, lower than than for White patients (40.1%) or Black patients (41.7%).

Their research letter, published by JAMA, Journal of the American Medical Association, can be found here.

The findings come as no surprise to Dr. Kathleen Raquel Page, one of the co-authors who said she and her colleagues noticed early on that an unusually high percentage of their Covid-19 patients were Hispanic.

“All you had to do was walk around the wards and see what was happening,” said Page, an associate professor of medicine at Hopkins. 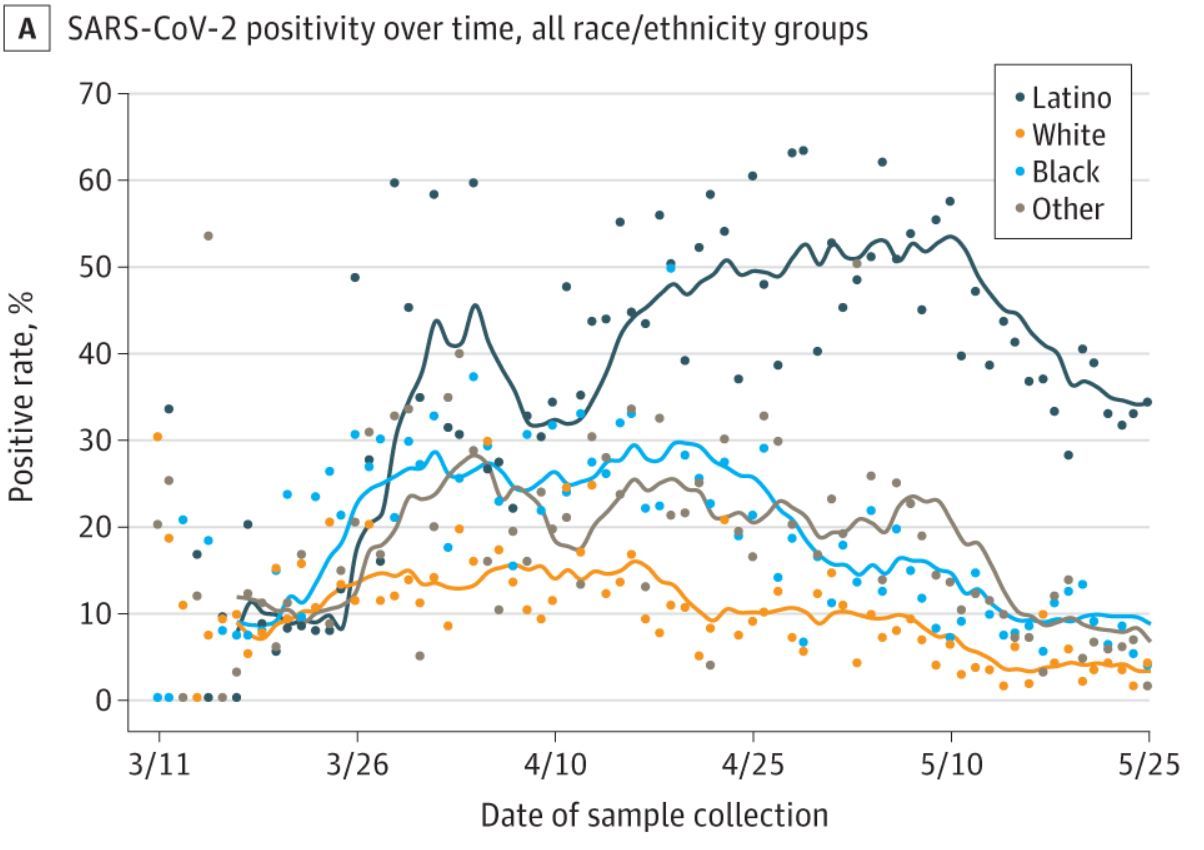 The “SARS-CoV-2 Positivity Rate by Racial/Ethnic Groups in the Baltimore-Washington, DC Region” study, conducted between March 11 and May 25, 2020, shows a disproportionate rate of Covid-19 positivity in the Latino population. (JAMA, June 18, 2020)

While the overall number of new Covid-19 infections and hospitalizations in Maryland may be declining, minorities continue to be disproportionately contracting the virus.

State Department of Health data show Hispanics, who represent about 10% of the state’s population, account for 26.8% of confirmed cases.

The Hopkins study authors note that the sample was limited to patients visiting Hopkins facilities, excluding those tested elsewhere in the region.

And they point out that they cannot determine whether differences they found in Latino patient positivity rates represent a higher disease prevalence or other factors affecting access to health care or both.

“Addressing the unique needs of the Latino community may help mitigate the spread” of infection and prevent COVID-19 disease, the study points out.

Speaking with The Brew, Page said several issues could explain the Hopkins findings. They include less access to testing, lower rates of insurance and health care utilization, and an inability to maintain social distance due to dense housing situations.

She said the immigrants she treats often don’t have health insurance, making it harder for them to see a doctor and receive testing

What’s more, many members of the Latino community are “essential workers,” required to show up on jobs that place them at higher risk for infection.

“Employers have a responsibility to provide adequate protection. I’m not confident that was happening”  – Dr. Kathleen Raquel Page.

She also pointed a finger at employers for Latino workers not taking enough precautions to protect them from the virus.

“Employers have a responsibility to provide adequate protection, and from what I heard, I’m not confident that was happening,” Page said. “Some of these employers are small operations, and may not have had access to the right PPE to provide.”

Oftentimes, she said, workers are picked up in a van with the windows closed, before taking a long ride to a work site where they confront more infection risks.

Immigration status concerns could also be a reason people avoid getting testing until the last minute, Page said, stressing that she and fellow medical staff do not disclose information about patients with Immigration and Customs Enforcement.

“I understand why people would not trust institutions, given what’s happened with immigration lately, and there are lots of policies that are not particularly friendly to immigrants,” Page said.

“But I want to say loud and clear that people should not be concerned,” she said. “We in public health do not share information with immigration officials.”

She said another issue is that people who are vulnerable for all these reasons may wait to come in to be tested until the last minute.

“If you’re waiting to get tested until you show symptoms of the disease, a higher percentage of the demographic will be positive,” she said.

From the “SARS-CoV-2 Positivity Rate by Racial/Ethnic Groups in the Baltimore-Washington, DC Region” study.

Laid Off and Worried

Colin, who lives in Essex, was laid off along with eight others from his construction job in early June when his employer discovered that his boss tested positive for the virus.

Unlike others he knows who needed hospitalization, Colin said his worst symptoms were chills, aches and other flu-like symptoms that led him to seek testing.

“I’ve tried to stay in my room to separate. I have my own cup, spoon and plate, so it doesn’t get the rest of my family”  – Octavio Colin.

Asked why people in the Latinx community often avoid going in for testing, he said it’s the fear it will lead to expensive hospital bills.

As a DACA recipient, Colin didn’t worry about the status of his citizenship before he went in for testing, but he is concerned that his wife and two young children may have the virus now.

“Since they told me I was positive, I’ve tried to stay in my room to separate.  I have my own cup, spoon and plate so it doesn’t get the rest of my family,” Colin said, adding that he worries his precautions may be too late.

“I talked to one of the specialists, and she said that when you stay in the house with your family a week or two, they have it already.”

For Colin, quarantining was possible because he lives in a one-family house.

But in Highlandtown and other parts of southeast Baltimore, he said, dozens of people often live together, with multiple families sharing the same building, all of which makes it easy to spread the virus.

“In those cases you could get it anywhere,” he said. “You eat around these people, and you don’t know where they’ve been and could’ve contracted it.”

More so than his health concerns, losing his job has been the most significant effect of the virus pandemic so far. A few days ago, Colin went back for testing to see if he is “clean,”

“I’m still waiting on the results. I need that for my job so I can go back to work,” Colin said, noting that he still hasn’t been paid on his previous job.

Not Out of the Woods

Page acknowledged that the number of Covid-19 patients in the Baltimore area has been going down. But while it’s “great news” that hospitalized patients are declining, she said, “it’s not at zero, and the potential for the virus to rear its ugly head again is still there.”

“I’m still deeply concerned about our Latinx community, and I can’t say there’s enough data to definitively celebrate any kind of real drop in [Covid-19] rates,” he said.

Cohen agreed that Latinx families often live in close quarters with multiple families, but said this is often the result of housing exploitation by landlords.

“They have been leaving their house every day since the pandemic started, so they’ve been more exposed”  – Katie Phillips.

“We did not need a study to tell us our Latinx community has been devastated by the coronavirus,” he continued. “What we find is the same health and other inequities that we normally see are accelerated and exacerbated by this virus.”

Katie Phillips, clinic manager for the Esperanza Center, agreed, summing up the challenges faced by immigrant families her organization serves in Fells Point.

“They work in construction, in food service, and have been leaving their house every day since the pandemic started, so they’ve been more exposed,” Phillips said.

“Also, our community is primarily undocumented, and aren’t able to get unemployment benefits,” she pointed out. “So all of that support provided by Congress recently to help people – they weren’t eligible for it.”

The decline in positivity rates is encouraging news, she said, “but I feel it’s too early to be too optimistic.”