In the wake of the 2015 uprising, millions of dollars of public and private money, aimed at correcting historic racial and social inequities, began flowing into Baltimore.

Organizations that acted as “fiscal sponsors” – lending grassroots groups their 501(c)(3) nonprofit status and managing their grants and other administrative needs in return for a fee – became so popular that some began to turn down new clients.

But projects always got a “yes” from Strong City Baltimore, the former Greater Homewood Community Corp., which quickly transformed itself from a North Baltimore neighborhood support organization into a nonprofit powerhouse.

As overall revenues at Strong City soared to $12.1 million in 2017 thanks to private philanthropy and city grants – up from $3.4 million in 2013 – the nonprofit embarked on a speculative real estate deal.

It joined forces with developer Carl W. “Bill” Struever to renovate the A. Hoen & Co. Lithograph Building, a long-vacant factory in the deeply depressed Collington Square section of East Baltimore.

The complex opened its doors last January, envisioned as a space where entrepreneurs, nonprofits and “visionaries” can come together to improve the prospects of the surrounding area.

Seeking tenants to help fill the cavernous 85,000-square-foot space, Strong City has moved its fiscal sponsorship, adult learning and management personnel to the facility, boasting in a press release that the new headquarters represents the group’s ascent to “a truly citywide organization.” 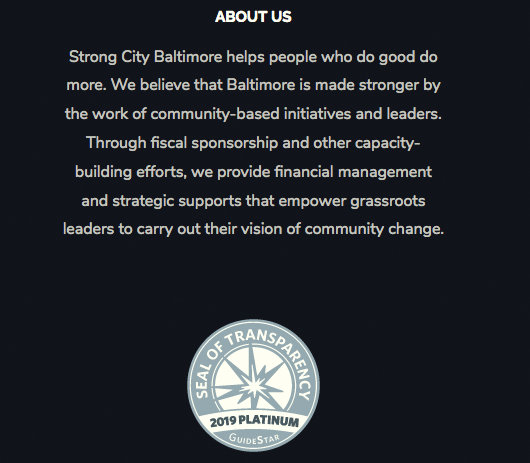 Strong City’s handling of other groups’ funds is now in disarray, The Brew has found, based on interviews with members of Baltimore’s nonprofit world and a review of written documents.

Its interim CEO says the Hoen building project had nothing to do with the financial turmoil. But dozens of groups that had entrusted their money to the organization say they aren’t able to access their money.

Clients describe missing invoices and bounced checks. Some of the city’s biggest nonprofit funders have stopped financial dealings with the organization.

The Weinberg Foundation, for example, currently has no active grants with Strong City “directly or with any organizations that use it as a fiscal sponsor,” said Darius Graham, the program director, in a statement to The Brew.

Complaints about lax accounting practices and poor communication have intensified amid the coronavirus pandemic, with some clients saying that Strong City staffers have been ghosting them since March. 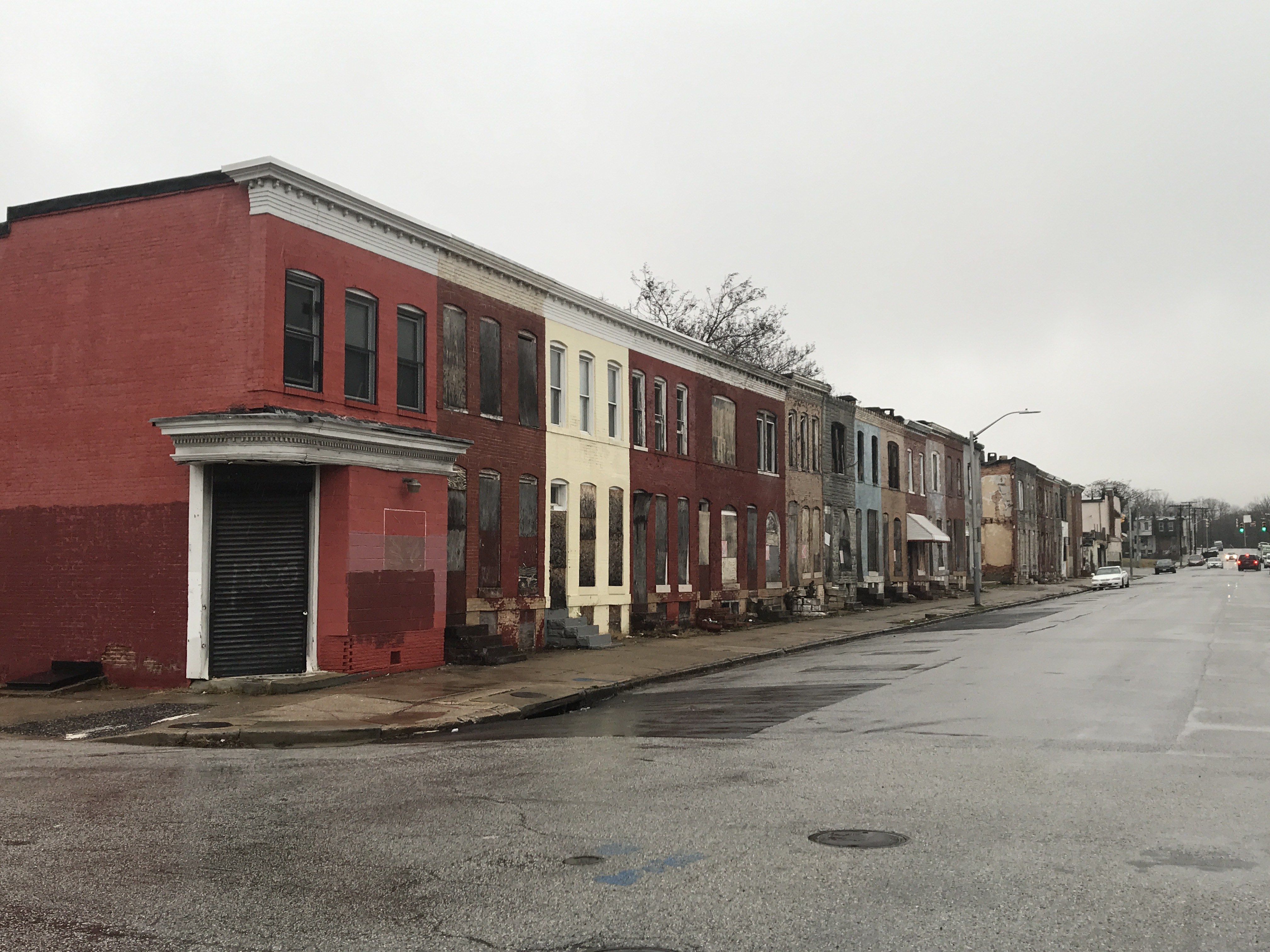 Some of the vacant rowhouses surrounding Strong City’s new headquarters on East Biddle Street, and the organization’s visualization of its place in the future community. (Mark Reutter, strongcitybaltimore.org) 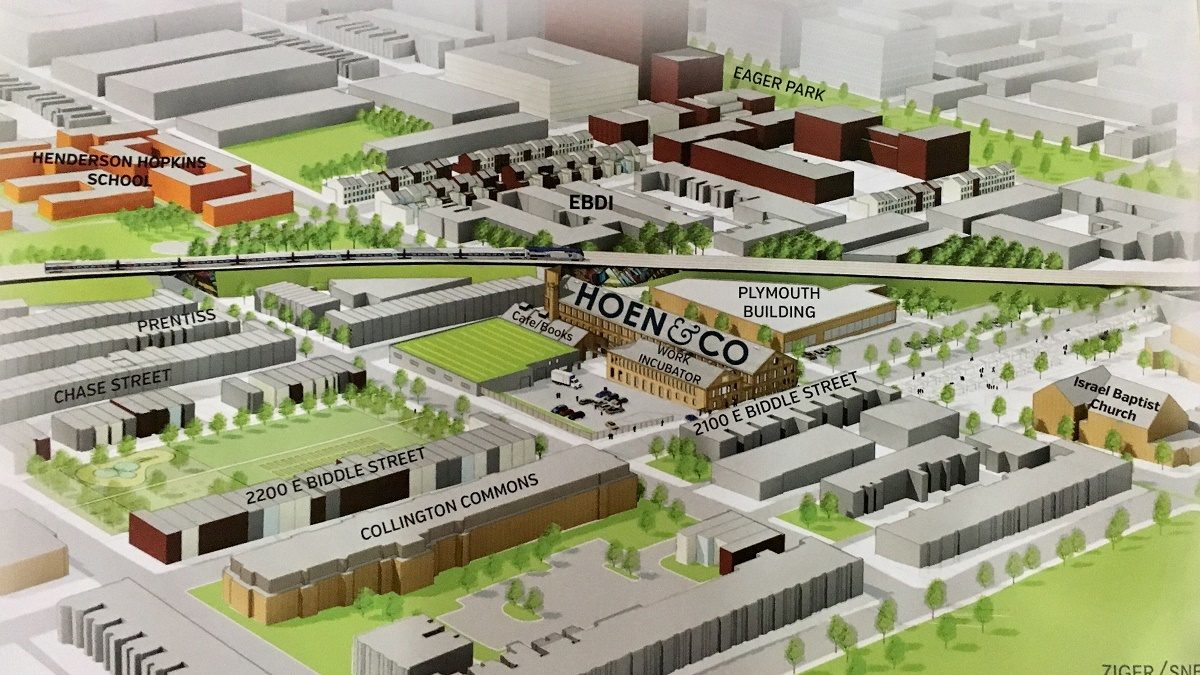 They range from small youth mentoring and farmers market projects to multi-million-dollar organizations that receive school system or city money, including more than $1 million from the taxpayer-funded Children and Youth Fund.

Where Did the Money Go?

Many are now asking where the money went – and they’re not getting answers.

“It snowballed – it’s kind of gotten out of control,” said Ana Rodney, who fears Strong City may never turn over the $10,000 she believes it owes MOMCares, the organization she established to provide single, low-income mothers with postpartum support.

“Everyone’s money is commingled, and they don’t want to pay any money out,” says one former client.

To Kevin Anderson, Strong City is “like a nonprofit Ponzi scheme.” He says the nonprofit has “locked up” $150,000 that belongs to his school-based recreational services company, NEWFIT.

“Everyone’s money is commingled, and they don’t want to pay any money out,” Anderson, a former phys ed teacher who founded the company, told The Brew.

“They tell you you are in a deficit position, but that’s because they’re behind on receivables – by $450,000 in our case,” said Anderson, who has since switched to another fiscal sponsor.

“You have to wonder if a lot of this is because they are robbing Peter to pay Paul,” he added. 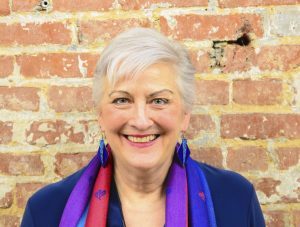 In April, there was a major leadership change. Just months after being hailed as the person who transformed the organization, Strong City abruptly announced that Stokes was stepping down as CEO.

A public statement noted that the board of directors asked her to continue serving “in an advisory capacity during this leadership transition.” She has not responded to multiple requests by The Brew to talk about her departure and the organization’s finances.

In a letter sent last month to Strong City’s board, 19 clients and former clients demanded accountability, saying it has reneged on its promise to provide sound financial stewardship.

“This compact has now been violated too often and too egregiously,” said the July 6 letter, which was also signed by six funders. “As clients, we have reached a breaking point.”

They detailed inaccurate and delayed financial statements, fouled-up receivables and invoices, delayed and blocked payments, citing among other examples:

● “Strong City consistently fails to issue invoices and pursue collections in a timely manner. Transparency and accuracy have declined.

● “Strong City has harmed relationships with vendors and contractors due to delayed and blocked payments. Policies have been inconsistent and unpredictable.”

“There are rumors and concerns about people not being able to get a clear picture of their financials or get access to their funds at all. That has created a lot of fear about what is Strong City’s cash flow looking like,” said Impact Hub executive director Michelle Geiss, who helped the client coalition draft the letter.

Geiss, who has moved her organization to another fiscal sponsor, said she is trying to assist other groups who can’t afford attorneys, feel they can’t transition to other sponsors or fear the consequences of speaking out.

At stake is grassroots efforts to strengthen Baltimore’s social safety net during a historic time of crisis, says a project leader.

“We’ve thought about the worst-case scenario. If there’s a bankruptcy, it would be at the peril of the projects,” Geiss said. “Many wouldn’t survive it.”

At stake, she said, is an important segment of Baltimore’s social safety net and the future of “grassroots Black-and-Brown-led efforts to strengthen it during a historic time of crisis.” 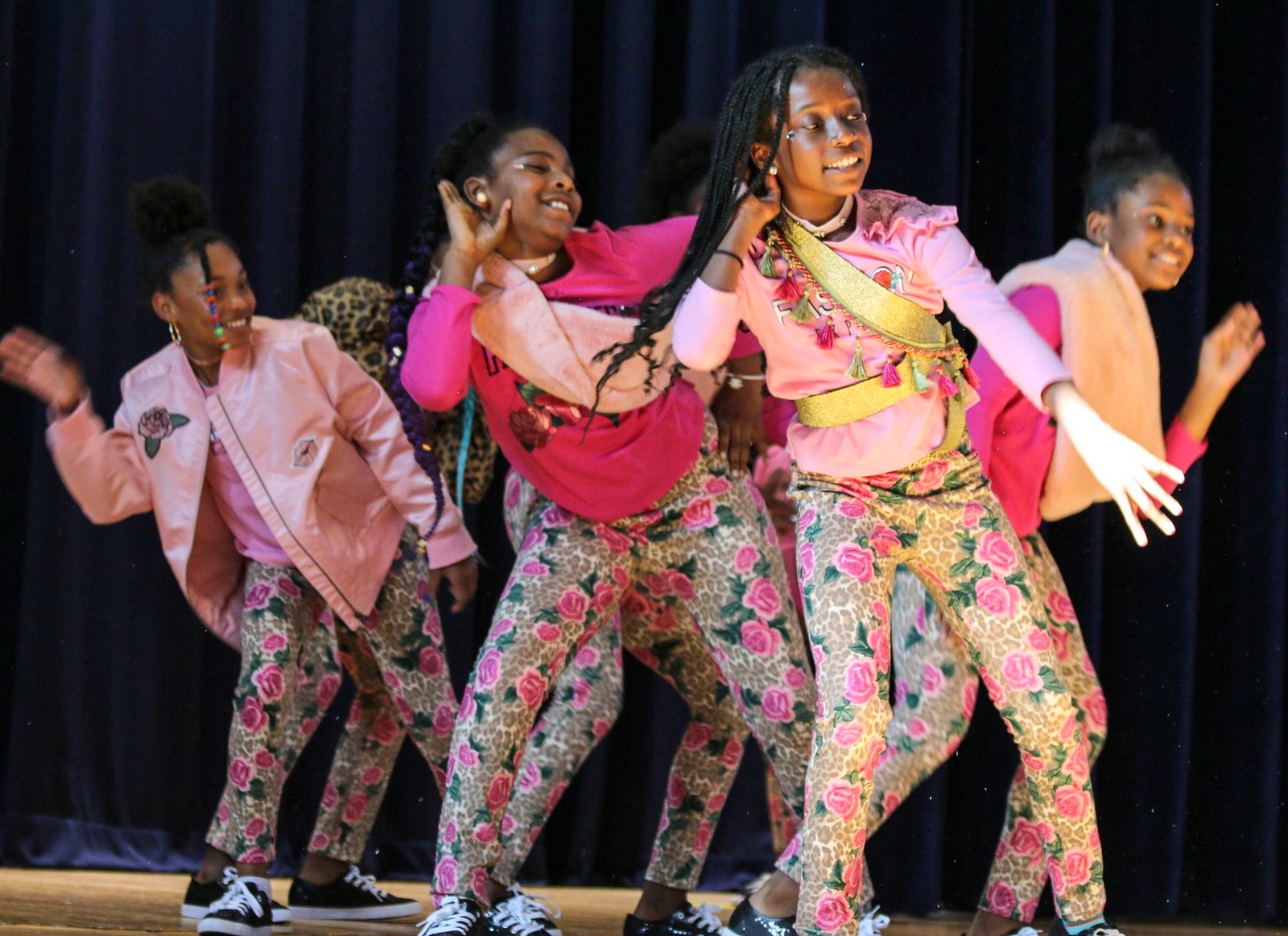 Baltimore city school students participate in a program offered by NEWFIT, a recreational services company. Its founder says he has not been able to access funds handled by Strong City. (Facebook)

Interim CEO Reginald Davis, who was hired as Stokes’ chief of staff last November, said Strong City has taken steps to “course correct” and to “address the deficiencies in our fiscal sponsorship program to strengthen our financial management like a good nonprofit ought to.”

His comments mirrored those in a reply letter the board sent to the client coalition in July that acknowledged the “level of service to our sponsored organizations has not been up to our own standards.”

“We have made mistakes as an organization,” the statement said, describing a number of measures undertaken to reform Strong City’s procedures.

Among the new measures Davis mentioned were monthly town hall meetings with clients, “touchpoint” meetings with individual projects and other “new systems and processes that would identify efficiencies, that would provide better services and transparency for our projects.”

He said he has brought on new staff, including a director of fiscal sponsorship, and financial statements are now being issued monthly.

Davis blamed “external stressors” for Strong City’s managerial shortcomings. Asked if he was referring to problems caused by the Covid-19 pandemic, he said he was actually speaking of the ransomware attack on city government last year.

“It’s one of those things that occur outside of us,” he said, “so we’ve had a couple of those stressors. But we’ve certainly rebounded.”

Geiss said the feedback she’s gotten from Strong City clients is that little has changed and they continue to fear for their financial future. 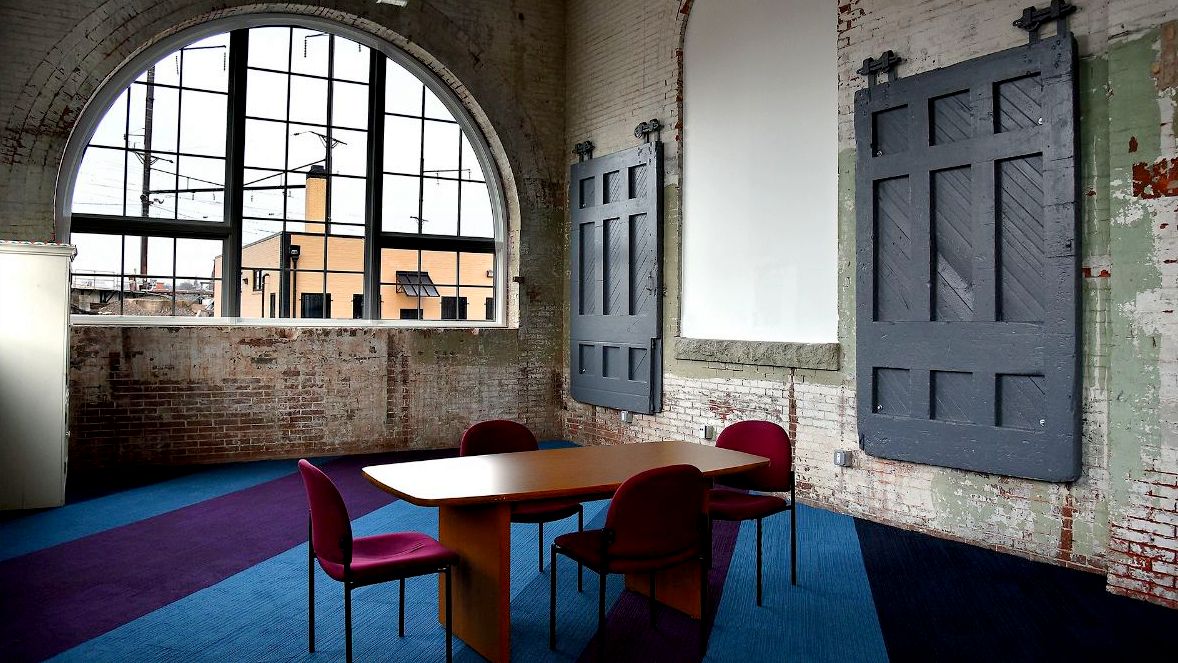 A conference room in the renovated Hoen building. (Facebook)

Asked if the Hoen project had diverted management’s attention from its client base and community programs, Davis argued that the project fit exactly into Strong City’s goal of becoming an “anchor institution” for nonprofit activism, particularly in East Baltimore.

“The board and the management made a decision to relocate,” he said. “There was an opportunity with the next phase of our work to do that work as an anchor institution with our partners, so that’s how we got here.”

The money was immediately lent to Struever to do the work – the first of a half dozen loans and grants from city, state and federal agencies to complete the project. Interviewed by a staff member last fall, Stokes explained the genesis of the project this way:

We were approached by Bill Struever of Cross Street Partners about the Hoen Building in East Baltimore’s Collington Square. A number of past development attempts there had failed, but Bill and I were both intrigued by the possibilities. Participating on the team that put together the financing package to make this work has been the biggest challenge of my professional life.

Davis said Strong City now pays rent to Struever for its space, but has the opportunity to become a future owner of the building. Asked when that might happen, he said, “Ask me in about seven years.”

Currently, he said, the property is 90% leased to Strong City, four other nonprofits, two businesses, and Struever’s development company.

Once the pandemic emergency is over, Strong City envisions making the building a community hub open to all, Davis said.

For now, they’re doing twice-a-week food distribution and looking for other ways to help the neighborhood.