With hotels and event centers beginning to reopen after laying off thousands due to Covid-19, unions are rallying in Baltimore to support City Council legislation intended to protect workers by putting them first in line to get their jobs back.

Ray Moore, a banquet server at the Hyatt Regency in Baltimore for more than 20 years, said in a statement distributed by Unite Here Local 7 that he’s only been asked to work one day this summer.

“After 23 years of hard work, I was so close to the finish line of retirement,” Moore said. “Now, it feels like it’s all being taken away.”

“They should absolutely have the right to return to their jobs, instead of being thrown out of work due to no fault of their own,” said City Councilman Kristerfer Burnett, the sponsor of two bills aimed at addressing the issue that are up for a Labor Committee hearing today.

Under Bill 20-0543, when hotels, event centers or commercial buildings change ownership – with or without Covid as the reason – the new owner would be required to keep the outgoing owner’s employees, in order of seniority.

The outgoing owner would provide a list of employees, and the new business would be required to hire from that list for six months for jobs that are substantially similar.

Bill 20-0544 would require employers to bring back workers they laid off because of the pandemic as their businesses recover.

Both measures face stiff resistance from the business community and are opposed by the city Law Department.

“Enough is enough!” Amy Rohrer, president and CEO of the Maryland Hotel Lodging Association, wrote in a letter to the Council. “The bills currently under consideration are illegal and discriminatory in nature and hotels are tired of being the target.”

Laid-off workers from local hotels and event centers rallied in front of City Hall on Tuesday to support the bill.

Michael Hachey, of Unite Here Local 7, which represents employees at the Hilton Baltimore, Hyatt Regency, Marriott Waterfront and other affected businesses, said the legislation is necessary given the “unprecedented job crisis” caused by the pandemic. 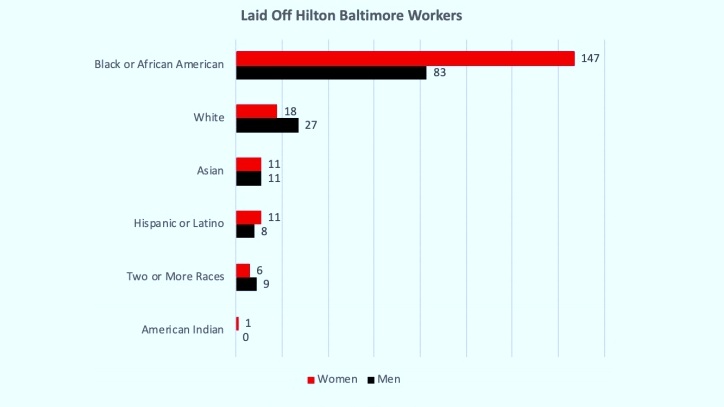 He also pointed to disparity in the impact of this year’s layoffs on the workers Unite Here represents.

According to the union, 69% of laid-off workers were Black and 58% were women at the Hilton Baltimore, which laid off more workers than any other hotel in the city.

Similar legislation guaranteeing “recall rights” has been passed in Oakland, San Francisco and other cities.

The Baltimore Marriott Waterfront hotel, for example, received a Payment In lieu of Taxes (PILOT) agreement from the city prior to opening in 2001.

In accordance with the PILOT’s terms, the high-rise property on the water’s edge in the heart of Harbor East only pays $1 a year in property taxes for 25 years.

That amounts to $61.5 million in lost revenue for the city over the same time period, which ends in 2022.

Industry groups said they already routinely hire and rehire in the way the bills require, but that making it a legal requirement was too much to ask.

Rohrer said the bills overregulate the industry, and that hiring by seniority may not align with a business’s needs.

She also noted some of the ways hotels have worked with the city during the pandemic, including providing shelter to the homeless and donating to food banks.

Donald Fry, president and CEO of the Greater Baltimore Committee, has also opposed the bill, saying it would hurt competition.

“Such an expansion of government regulation is unacceptable as it seeks to hinder legitimate business decisions made by a private sector business in the hiring of personnel,” Fry wrote in his own letter.

He called the penalties businesses could face “excessive and unconscionable.”

Ashlea Brown and Hilary Ruley of the Law Department said the bills would violate several existing laws, and that local government doesn’t have the authority to involve itself in the employer/employee relationship.

“This bill would be an unconstitutional impairment to the pre-existing employment arrangement,” they wrote, “and would not survive a legal challenge on this basis, even in the face of a global pandemic.”

But David Rodwin and Sally Dworak-Fisher of the Public Justice Center disagreed with that analysis – going so far as to recommend that the Council investigate why it gave “such unsound and unsupported legal advice.”

“The Law Department report’s conclusion,” Rodwin and Dworak-Fisher said, “is logically inscrutable and legally indefensible, and its analysis is unmoored from established precedent.”