The names and faces change, but there’s a long and sordid history of mayors using control of Baltimore’s Board of Estimates to push through insider deals that don’t pass the smell test.

I should know – I saw it intimately 35 years ago as an Evening Sun reporter covering the Board of Estimates – a five-member panel where the mayor controls three seats. But you don’t have to look that far back for examples.

The Baltimore police surveillance plane program – secretly introduced in 2015 and brought back this year as a potential crime-solving tool – triggered harsh public opposition.

Camera-equipped Cessnas filming citizens’ every daytime movement once they step outside would be a massive assault on privacy rights targeted disproportionately at Black residents, said critics, including the NAACP and civil liberties lawyers. On top of that, they predicted that it would be ineffective in fighting crime.

But while Council President Brandon Scott and Comptroller Joan Pratt cast “no” votes against the “spy plane” program, they were outvoted by Mayor Jack Young and his two appointees, the city solicitor and the public works director.

Just as everyone knew they would be.

An even more egregious example is what happened after former mayor Catherine Pugh pleaded guilty to tax evasion and conspiracy last November.

A month after her plea, Columbia businessman J.P. Grant, whose role in Pugh’s corrupt schemes was well documented at this point, had an $18 million master lease contract before the board.

Grant had admitted to federal prosecutors that he funneled $170,000 to Pugh, initially saying the money was intended to buy her “Healthy Holly” children’s books. In fact, the money went to her campaign fund and to pay for her purchase of a new home.

Should the city do business with a central figure in the biggest City Hall corruption scandal in years? And give him another lucrative contract?

Again, Young and his appointees on the Board simply voted it through as part of the routine agenda. 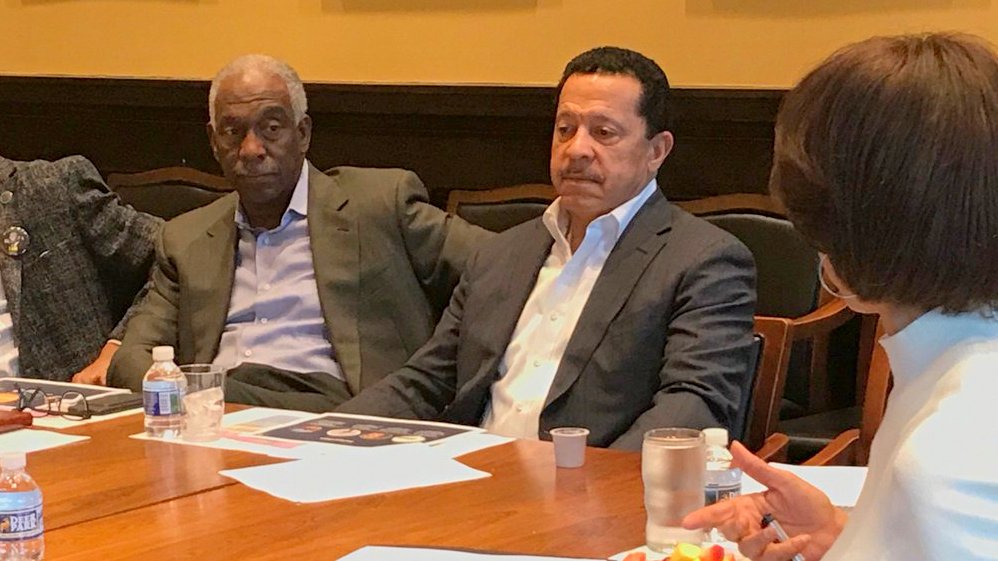 Not surprisingly, a process that lacks checks and balances leads to an absence of transparency.

That’s why the agenda for the BOE is so often written in dense bureaucratic shorthand. It’s why there is so little public explanation of the board’s decisions.

Back in the 1980s when the BOE was part of my beat, a spending item on the agenda only mentioned its budget account number.

The housing department had made sure the item was stripped of other details in hopes that I would fail to decipher it. (The housing official who wrote the agenda item confessed this to me years later.)

Luckily, a source with knowledge of budget account numbers tipped me off: it was a $100,000 grant from a neighborhood revitalization fund that had to be matched with private funds.

In this case, though, the money went to a Northwest Baltimore church run by a former state legislator, who got away without paying the match.

Neither his name, nor the name of the matching program, was ever mentioned on the board’s agenda.

Process is for Losers

Here’s an even more incredible example from the William Donald Schaefer era.

At an emergency BOE meeting in May 1981, the Pulaski Incinerator was sold to a partnership headed by millionaire contractor Willard Hackerman, one of Mayor Schaefer’s biggest campaign supporters.

Hackerman, who needed the quick purchase for a tax shelter, then charged the city to incinerate its trash and got the taxpayers to pay 85% of the incinerator’s operating costs for the next 15 years.

The meeting took place with only the city solicitor and public works director attending.

Yes, you read that right: Only two members of the five-person BOE voted. Quorum, shmorum. Legal process is for losers!

Of all the unchecked powers, perhaps the one that most directly affects people in the city is the mayor’s authority over water and sewer rates.

Baltimore supplies the drinking water, and gets rid of the sewage, of hundreds of thousands of residential and business customers.

The rates are determined by two people – the city’s director of public works and the city’s finance director – who, in turn, work for the mayor.

There is no equivalent of the Public Service Commission or a People’s Counsel to intervene on behalf of water customers.  The Baltimore City Council doesn’t have a say on the matter.

Add to this the fact that the mayor’s public works director is a voting member of the BOE, who gets the chance to vote on his own proposed rates.

Once the board votes, there is no appeal process. It’s like a mortgage lender approving a loan for their own house.

It’s like a mortgage lender approving a loan for their own house.

Although the board does stage a “public hearing” minutes before it votes on the rates, it seems ridiculous to bother since they answer to no one.

By the end of Mayor Stephanie Rawling-Blake’s term, Baltimore’s water and sewer rates were so high that 15% of residential customers were delinquent. The stakes for them could hardly be higher, including the prospect that their house could be sold at tax sale for unpaid water bills.

Nevertheless, in the summer of 2016, the public works and finance directors proposed hiking the rates even further – by 30% over the next three years.

There was no public notice of the rate hike on the DPW website. The city only issued a press release after media reports on the proposed 10% yearly increases.

DPW tried to put a positive spin on the hike by calling the annual rates “single digit” because the increase each year was technically 9.9%.

I am not making this up. I saved the press release. 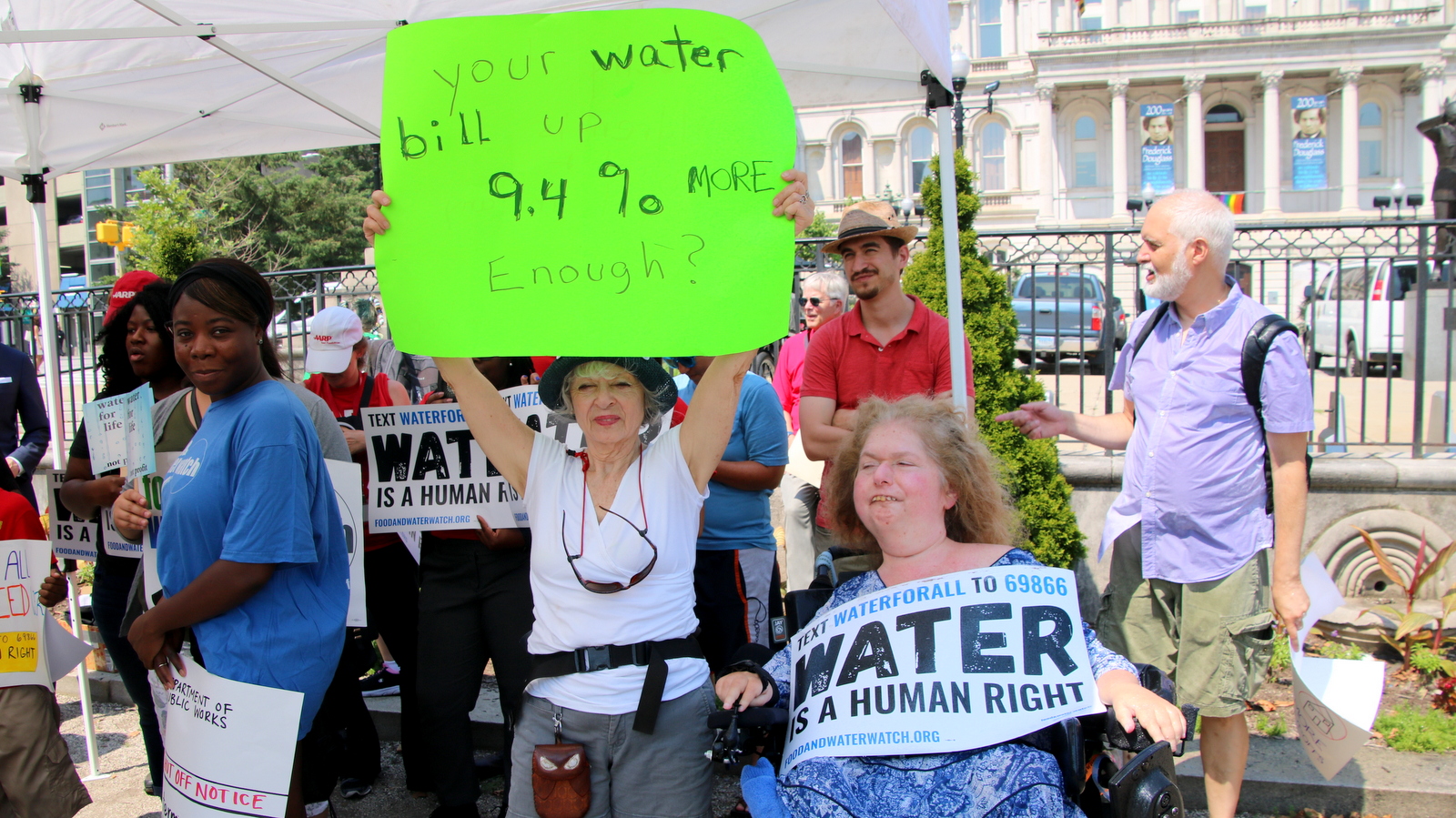 Residents protest water rate hikes in front of City Hall. The Board of Estimates has approved 20 increases over the last 21 years. (Fern Shen)

Testifying at the board’s faux public hearing was Margaret Henn, then co-chair of the Baltimore Tax Sale Working Group made up of nonprofit lawyers, housing and water affordability advocates.

“After experiencing a 42% water bill increase over the past three years, many city residents are simply unable to pay,” she told the board.

At the time, she noted, “over 16,000 residential accounts had shutoff notices.” Increasing rates yet another 30% “over the next three years will place an extreme burden on the City’s most vulnerable citizens.”

The board was unmoved.

Today, Henn remains disgusted with the empty exercise, in which one government entity controlled by the mayor scratches the other.

“It was just an opportunity,” she said, “for the Board of Estimates to rubber stamp the Department of Public Works’ recommendation.”

And this, in turn, stems from the strong mayor system that was formulated, more than a century ago, as an antidote to cure chaotic governance and corruption in Baltimore.
____________________

The Imperial Mayor Part 3: When ward bosses reigned and the Board of Estimates was born.
____________________
• JOAN JACOBSON is a former Sun and Evening Sun reporter who authored eight Abell Foundation studies on vacant houses, water affordability, tax sale inequities and other urban problems. She most recently wrote “Eyes of Justice, a career crime fighter battles corruption… and blindness” with James Cabezas.