On a Saturday in October, Morgan Thapa yanked vines off of a Rose of Sharon tree at Duncan Street Miracle Garden. The vines were wrapped so completely around the tree that it was unclear what was tree and what was weed.

But they came off easily enough, and sunlight came through its branches for the first time in months.

“A couple tugs and it’s looking so fresh,” Thapa said.

These trees with their late-season lavender flowers are special to Lewis Sharpe, longtime steward of this East Baltimore community garden. They were all over the land he grew up on in rural Virginia.

“Had ’em all over the place,” Sharpe said. “It bring out so much beauty, butterflies and bees.”

It may not look like much yet, but thanks to Thapa and others, the garden has come a long way in three months. 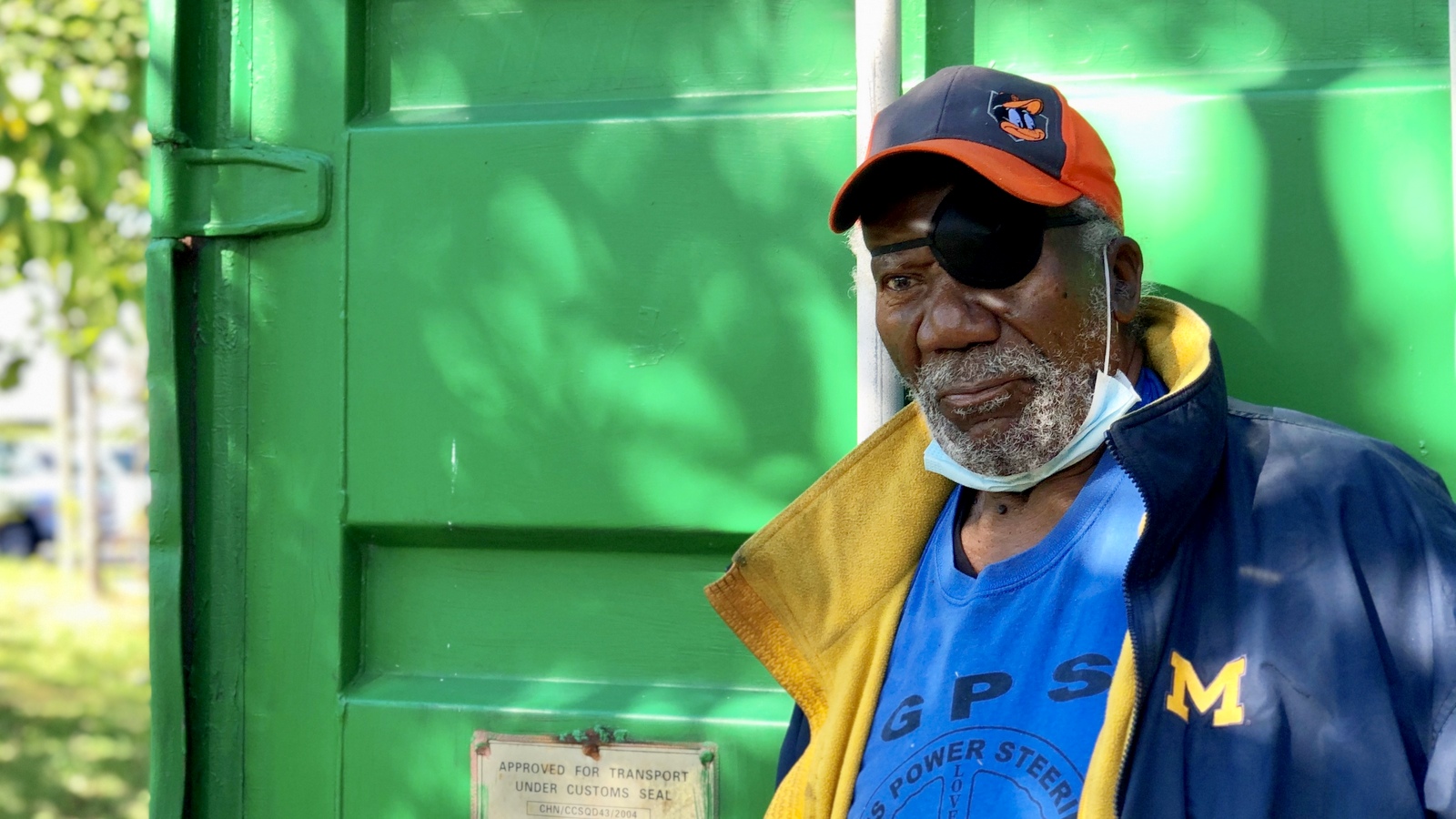 Lewis Sharpe’s vision for the Duncan Street Miracle Garden includes a playground, chickens and a seniors pavilion. (Ian Round)

“We’re in a good place now”

When The Brew visited in August, the garden was in its worst shape in years due to Sharpe’s poor health and a coronavirus pandemic that kept volunteers away.

The grass had grown tall, weeds were choking other plants and litter was accumulating. Sharpe didn’t have the usual contingent of young helpers, and he spent time in the hospital, so he wasn’t able to plant crops.

Just as the pandemic made food insecurity more urgent and widespread, Broadway East’s most important food producer itself faced a massive disruption.

The garden was in its worst shape in years due to Sharpe’s poor health and a coronavirus pandemic that kept volunteers away.

Thapa has worked at Duncan Street a few days a week since early August, a position created to support Sharpe.

Just after she started, The Brew wrote about the garden’s struggles and the movement for local food production.

Dozens of people became interested in volunteering and flooded Thapa’s inbox. About 60 people emailed her and 40 have volunteered. 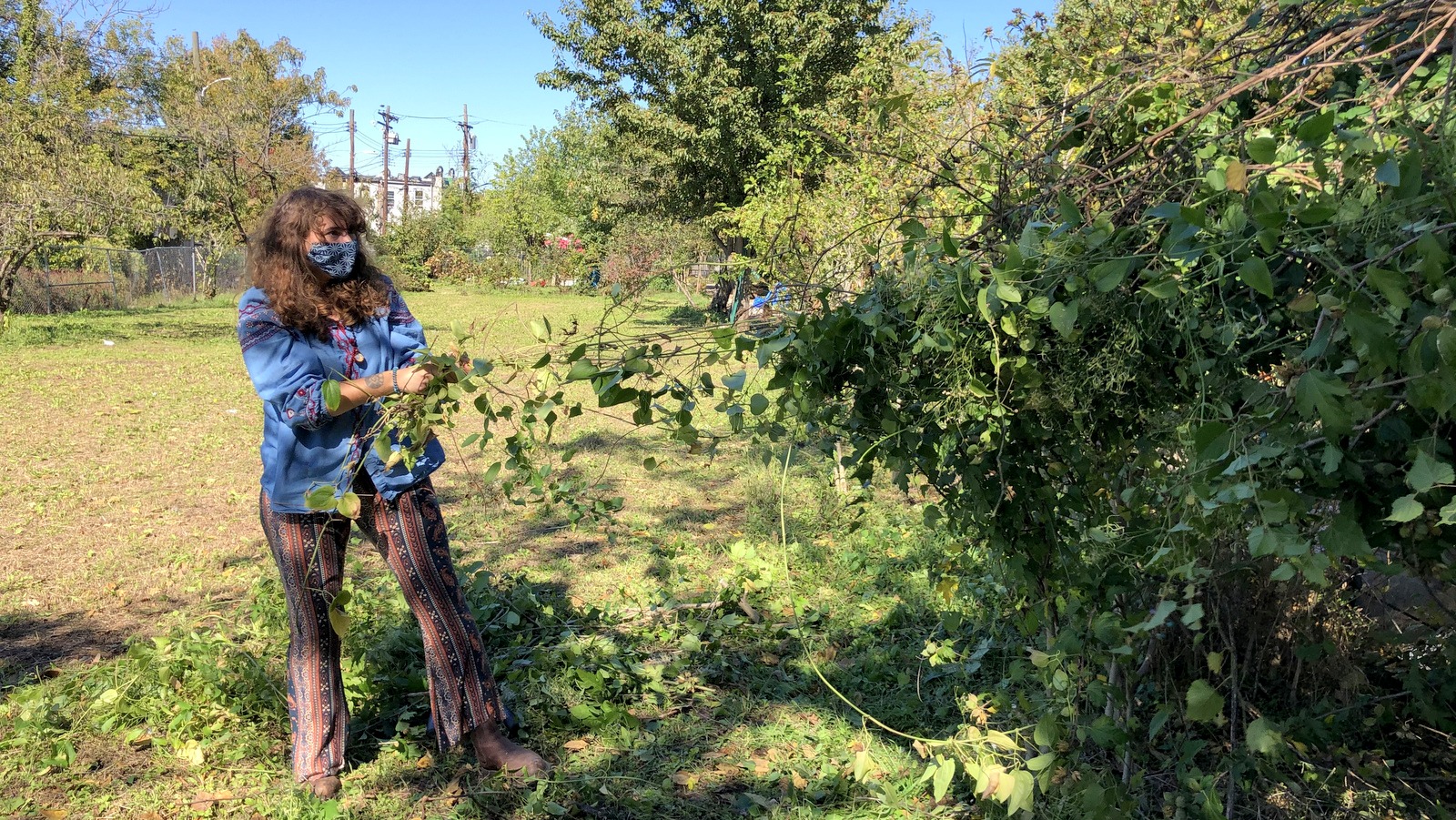 Morgan Thapa yanks out the weeds choking the Rose of Sharon at the miracle garden. (Ian Round)

One group that came recently, through garden sponsor Moveable Feast, was from the downtown accounting firm, Ellin & Tucker.

A team of eight volunteers did a tremendous amount of digging to make new garden beds. They also repaired some fencing, cleared out weeds and mulched some pathways.

Now the grass is cut short, and vines no longer cover the fence. The trash keeps coming, but it’s getting picked up more consistently.

It’s too late in the year to harvest anything, but Sharpe and Thapa say they’ll be able to replace most of the grass with crops in the spring.

“It’s difficult to notice, but it looks a lot more cleared out,” Thapa, 27, explained. “We’re in a good place now to start planting. We are going to plant in every possible space.”

“Also maybe some purple stuff,” she said. Purple vegetables, she said, are nutrient dense and filled with antioxidants. “We want this place to look like Filbert Street.” 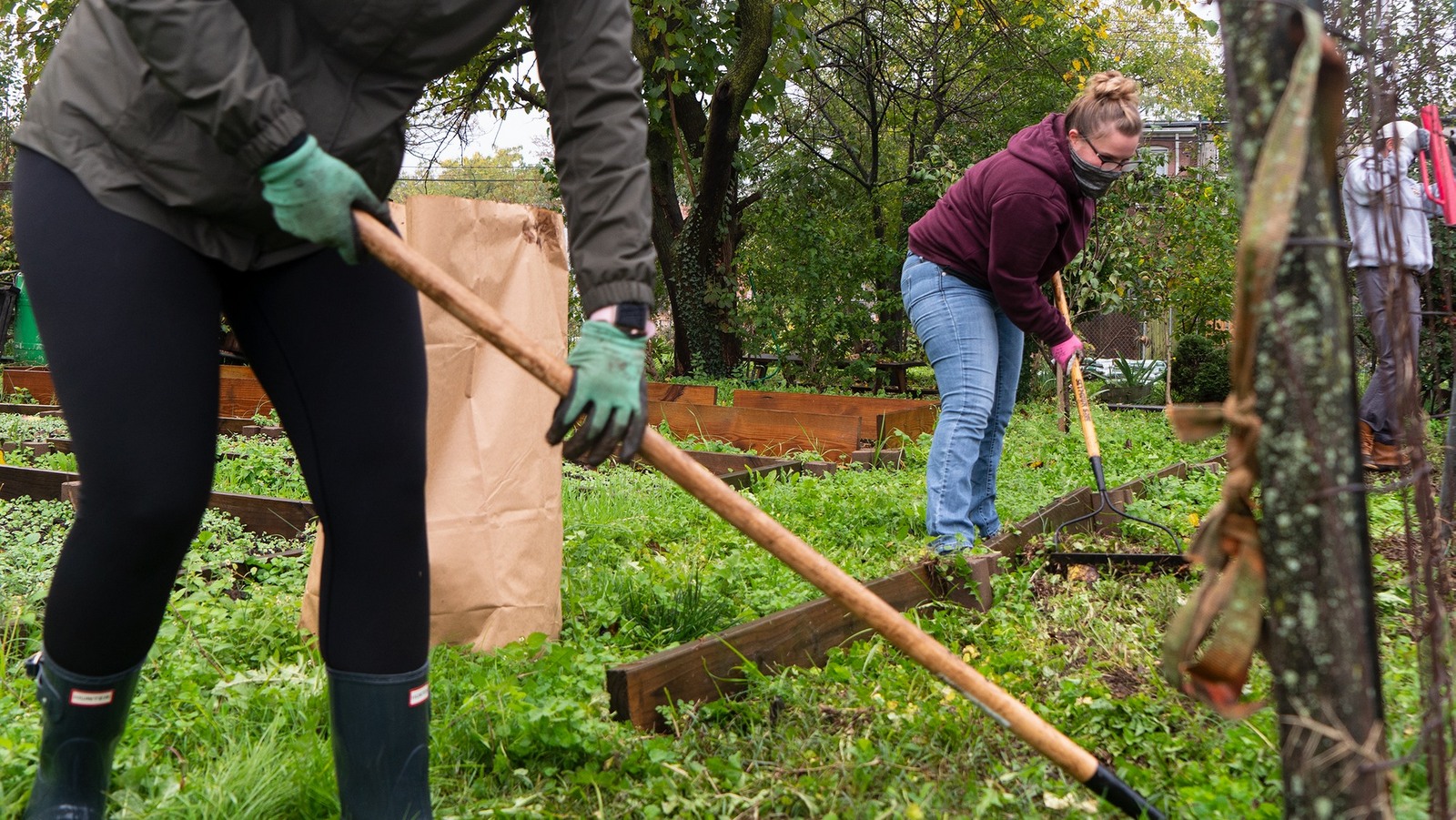 Volunteers clear out and repair the beds at the miracle garden. (Above Ellin & Sharpe, below Ian Round) 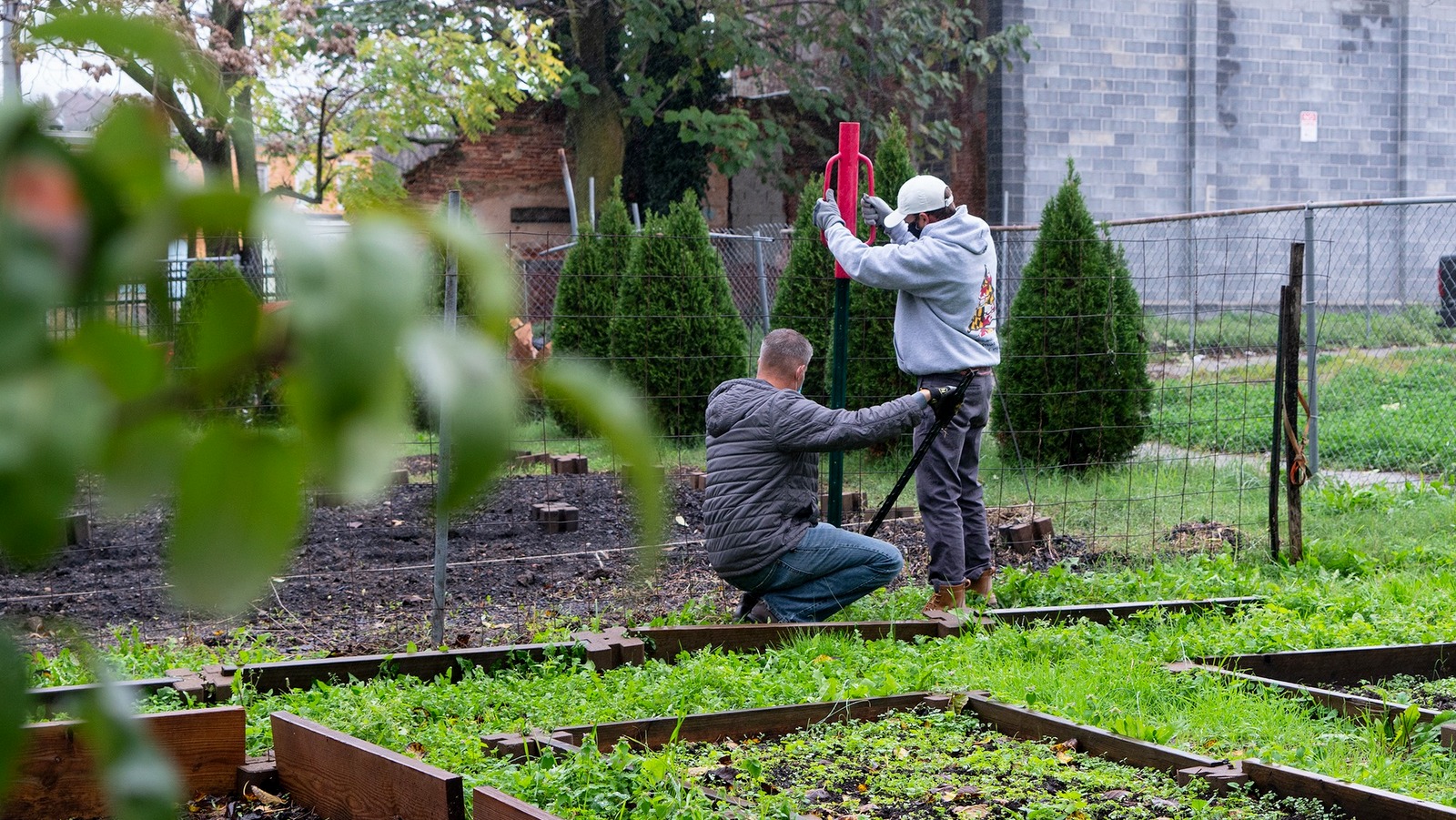 “At home in Baltimore”

Sarah Coffey Frush was one of those volunteers. She cultivates a plot in Patterson Park, and felt “personally called” to help Sharpe fix up the Duncan Street Miracle Garden. She said she felt indignant “watching years and years of work kind of fall apart around him.”

“As a fellow gardener, I can imagine how awful it is to just sit and watch things not progress over the course of the year as you thought they would,” she said. “The pandemic is not going to take this from this man!”

On her first Saturday, she ripped out weeds from one corner of the garden. She noticed two chairs – “awesome, metal, old-school garden chairs” – that were rusted. She took them home to her husband, who is removing the rust and repainting them.

She got poison ivy, but that didn’t stop her from coming back.

“It just made me feel at home in Baltimore,” she said.

Sharpe has his eyes set on two adjacent lots, which would nearly double the size of the garden.

On one lot, currently overgrown with weeds, Thapa said they would need to grow sunflowers, because there is probably toxic material in the soil. She said sunflowers make the soil healthier by taking up heavy metals. After the phytoremediation process, it may be safe to grow vegetables to eat.

Thapa said the money for a seniors’ pavilion, which has long been one of Sharpe’s dreams, is in the process of coming through.

Sharpe is eager for the investment. He envisions a playground, chickens and goats. That will require others to follow his lead with contributions and sweat equity.

“Been here since 1988, never put no money in my pocket, always taking out,” he said.

What will this place look like in three years?

“At my age, I can’t see that far,” Sharpe replied.