It was almost midnight Friday when Danielle Hopper Dubasak got the news in an email from her employer, Baltimore City Public Schools:

Dubasak had been selected to report back to work as a part of the district’s plan to bring more students back to buildings for in-person learning next month.

But the mother of four young children had already told her principal she wouldn’t return to the building as long as the Covid-19 pandemic raged.

“I would quit if it came down to it,” said Dubasak, who works as an Individual Education Plan (IEP) team associate at Collington Square Elementary/Middle School.

Even “on a normal day,” she pointed out, the 59-year-old East Baltimore school not only lacks basic sanitation supplies such as hand soap, but is stuck with an HVAC system that is “unreliable.”

Her worries are not unfounded.

Only 28 of the 108 elementary and elementary/middle schools – or 26% – have completed air ventilation system upgrades, according to a City School’s status report provided to The Brew.

Of the 80 elementary and elementary/middle schools currently without upgrades, 18 reportedly have the work “in progress,” while 62 schools, including the one that employs Dubasak, are “scheduled” for improvements.

Elementary schools will be the first to open under a phased-in plan announced last week by CEO Sonja Santelises, to begin bringing students back to school buildings whose doors were closed last spring to safeguard children and staff from the spread of the deadly virus.

Families of students in kindergarten through second grade who choose to return to the classroom can do so on February 16.

Two weeks later, on March 1, third through fifth graders and ninth and 12th graders can return. All other grades will continue virtual learning.

To make schools safe for student and staff use, all 147 public school buildings in Baltimore have been slated for ventilation upgrades.

The district says it is adhering to Centers for Disease Control and Prevention guidelines for improved indoor ventilation, which can reduce the risk of exposure to the virus along with social distancing, mask wearing and hand hygiene.

The school plan said HVAC systems will be fitted with high-grade MERV 13 filters and, when applicable, semi-permanent air purifiers will be placed in classrooms. Industry experts say MERV 13 filters trap 85%-90% of Covid particles.

Depending on a school’s existing system, it can receive new filters, classroom air purifiers or a combination of the two.

Of the 73 schools slated for filter upgrades, only 18 buildings (or 24%) are listed as “complete” and 18 are listed as “in progress.” Thirty-four schools are “scheduled” for upgrades, and three are waiting ordered equipment.

Of the 74 schools waiting for air purifiers or a combination of purifiers and filters, 22 schools (30%) are so equipped and 52 buildings (70%) are listed as “scheduled.”

In the case of Collington Square Elementary, the report shows that filters have been upgraded in common spaces (cafeteria, gym and auditorium), but classrooms have not yet received air purifier units.

Many city schools have yet to have any work done.

Despite 3 out of 4 schools not yet fully equipped with the necessary HVAC upgrades, City Schools spokesman André Riley said the district will be able to stick to its opening schedule.

“The goal is to have the work completed by a site’s opening date,” he said.

In cases where buildings to be occupied have not yet received scheduled upgrades, temporary portable air purifiers will be in place by mid-February, he said.

The district has purchased 6,500 air purifiers on wheels, which can be plugged into a wall and moved among classrooms. Riley noted that more are on order, but was unable to say how many.

Despite these assurances, many teachers and staff remain skeptical.

“Even if you have the best filter in the world, if there isn’t sufficient circulation and airflow, then you’re not actually creating a safe environment for staff and students,” he said. 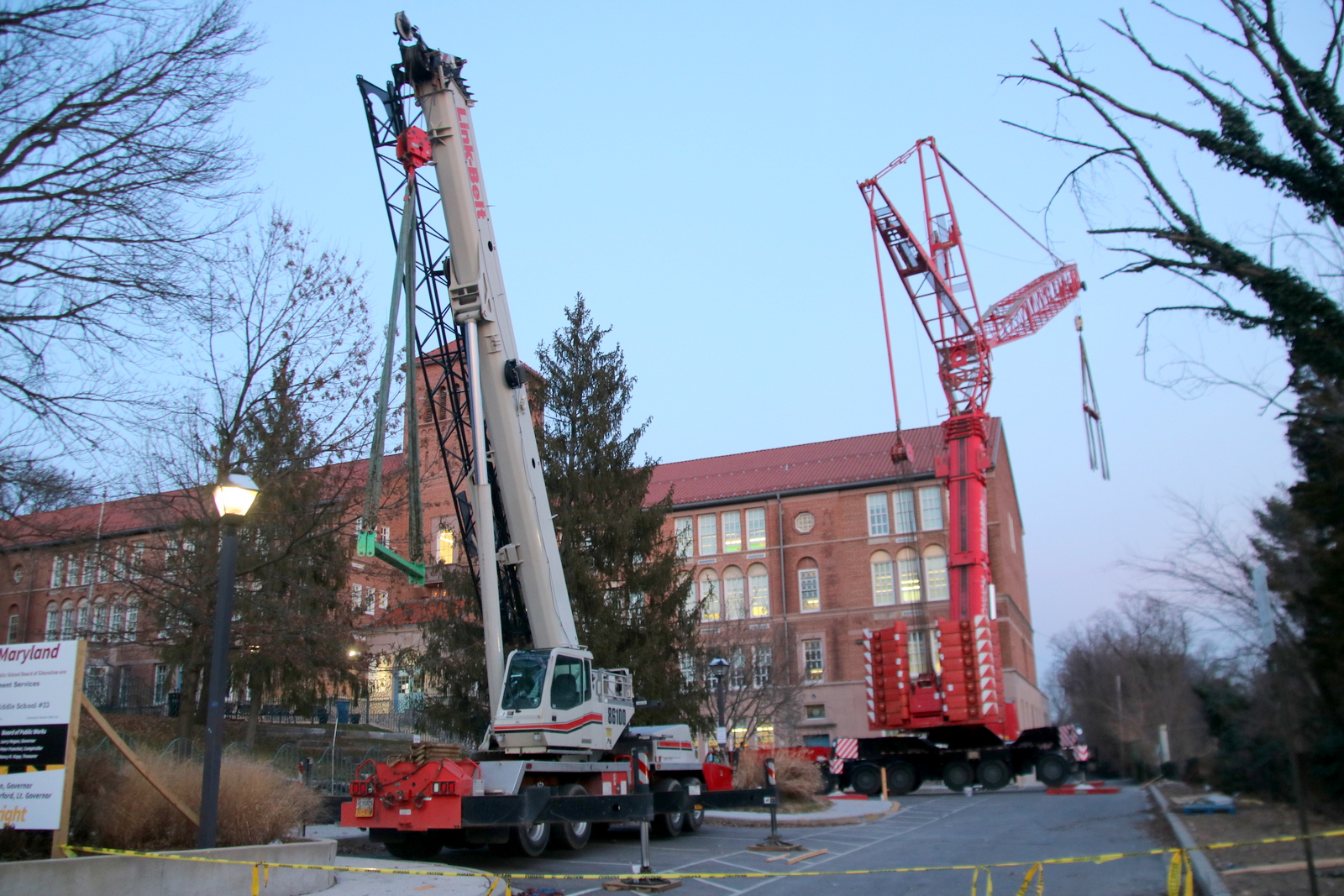 Gaber says he understands the difficulty faced by the district of trying to fix antiquated infrastructure while being chronically underfunded, but still wonders about the rush by Santelises to reinstate in-person learning.

“There’s no need to force people back into the buildings before they are safe,” he asserted.

During the school board’s virtual meeting last Tuesday, the BTU staged a car rally, driving and honking outside the district’s headquarters on North Avenue.

The union demanded that no staff be required to work in school buildings for the remainder of the school year, but instead be given options and the equipment and connectivity to work remotely. The union also demanded that no jobs or budgets be cut during or after the pandemic.

Mistrust of the System

Eighth-grade teacher Michael Newhouse knows he will not be tapped to go back to his building. Middle schoolers will remain virtual learners as part of the second semester reopening plan.

But as the BTU’s building representative for Armistead Gardens Elementary/Middle School, he has heard from teachers who don’t want to go back into school buildings.

“There’s a lot of mistrust in the system’s ability to actually have this work done to the level that they said that they’re going to have it done,” the 23-year veteran teacher said of the proposed ventilation upgrades.

Unlike students, he points out, teachers and staff do not have the option to stay home and work virtually.

“There’s a lot of mistrust in the system’s ability to actually have this work done to the level that they said that they’re going to have it done”  – teacher Michael Newhouse.

Teachers tell him they know some learners would do better in a classroom with a teacher present, and that they miss their students.

“The options are you either go in, or you work it out with your principals,” he said.

Teachers have been told they can take a leave of absence or request a medical accommodation, he said, a process some have already started.

Teachers tell him they know some learners would do better in a classroom with a teacher present, and that they miss their students. But the stakes and the rates of coronavirus infections in the city are still too high.

“We don’t feel even a year’s worth of loss of learning is worth anybody’s life at this point,” Newhouse said.

When Dubasak first spoke with The Brew on Friday afternoon, she said she had no idea what she would do for childcare if she was told to go back. And she didn’t think she would be recalled because her job was so easily done over video conferencing.

Dubasak gave birth to her youngest child in March at the beginning of the pandemic. Since then, she said, she has taken every precaution to limit her family’s Covid-19 exposure including, for example, having groceries delivered instead of going to the store.

She noted that the school district’s approach to the pandemic is increasingly at odds with the city’s strict limits on social gatherings.

On Friday, Mayor Brandon Scott announced that Baltimore’s temporary ban on indoor and outdoor dining will remain in place because of a sharp spike of Covid-19 cases citywide.

This came after a Circuit Court judge denied a request by a restaurant association to put the dining suspension on hold. 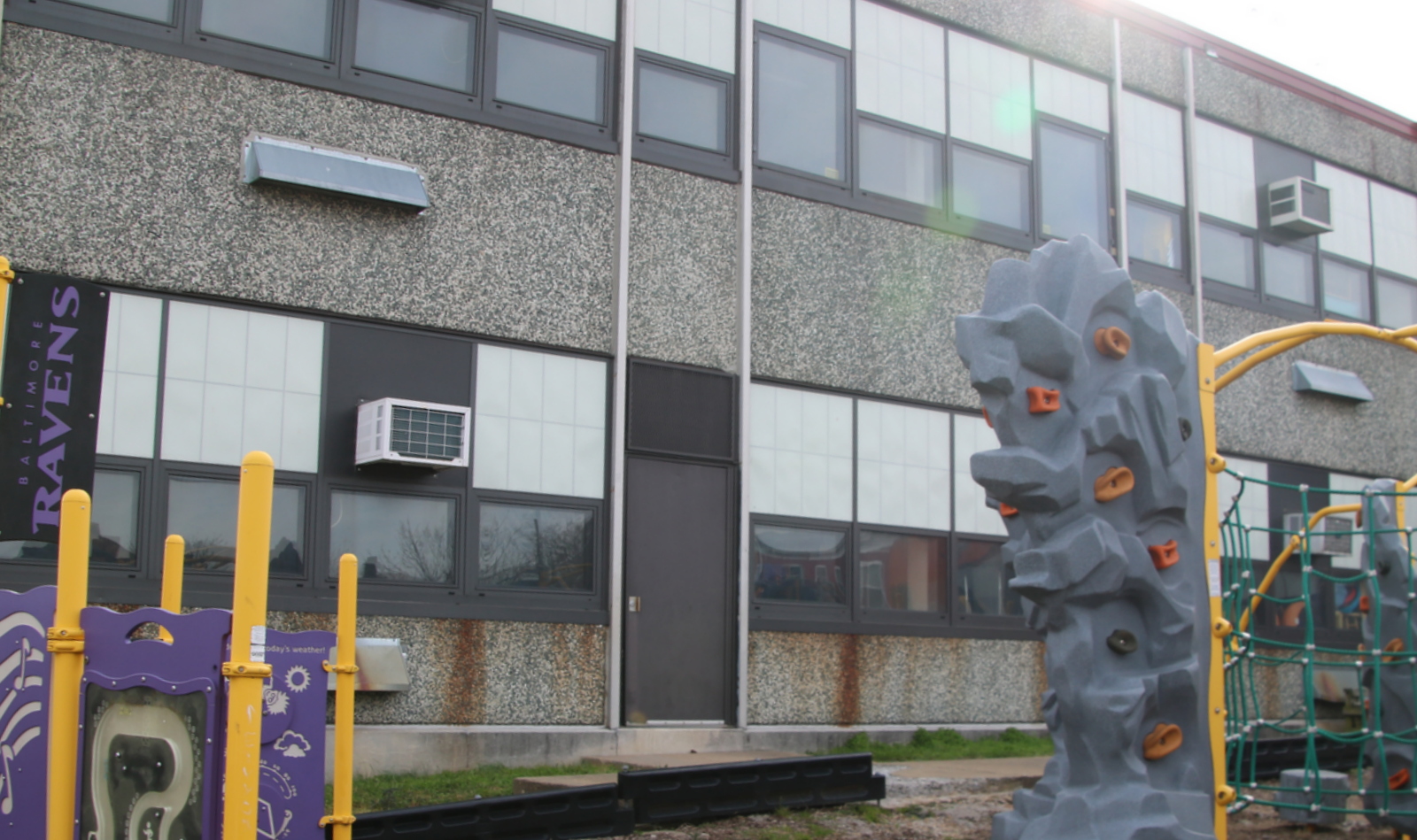 Students are scheduled to return in a month to Collington Square Elementary/Middle School. (Fern Shen)

“How is it okay for the children to sit in a classroom for six hours where you expect them to eat breakfast and lunch” given the restaurant dining ban, Dubasak asked.

“It just seems silly to throw it all out the window now, just because they want to rush back into buildings,” she said.

As for the school system’s new plan to begin administering the Covid-19 vaccine to teachers, Dubasak criticized its slow rollout due to inadequate supplies of the vaccine.

“They still expect teachers to start before giving them the opportunity to get both rounds of the vaccine,” she said. “It does not change my feeling about anything.”