Baltimore housing advocates and some members of the City Council have been trying to slow down a suddenly fast-moving bill they say contains a “Trojan horse” provision that will potentially hurt city renters.

“It’s part of a trend of measures that are being pushed around the country that create an opportunity that basically benefits one company,” said Councilman Ryan Dorsey.

Dorsey pointed to detailed testimony by the coalition group Baltimore Renters United, warning that the bill as written “does not include any guardrails to protect the tenant or prevent predatory practices.”

“A tenant who thinks they are purchasing insurance will be shocked when the surety sends an invoice for the full amount of apartment damages and unpaid rent,” said Tisha Guthrie, of the Bolton House Residents Association; Jane Santoni, a partner with Baltimore consumer rights law firm Santoni, Vocci, and Ortega; and Marceline White, executive director of the Maryland Consumer Rights Coalition.

“Imagine the double shock when the invoice includes arbitrary extras, like processing, administrative, legal and collection fees, not to mention interest charges that will compound quickly if the tenant does not reimburse the surety within a very short time (likely thirty days),” the three said in a statement to The Brew. “Imagine how this could affect a tenant’s credit record.”

Rhino, a Manhattan-based company that markets the product, has been pushing so-called “Renters Choice” legislation nationwide, arguing it is a novel form of  tenant relief that will help people secure housing amid a pandemic. Cities, including Atlanta, have approved legislation allowing it.

Under Bill 21-0022, tenants can purchase “rental security insurance” as an alternative to putting up a security deposit.

Critics say it is, in reality, a surety bond that takes away their right to contest landlords’ charges. They warn it could end up costing renters more in the long run than simply paying the deposit.

The company has also been pushing the measure in Baltimore, despite the fact that its representative has not registered with the city as a lobbyist, according to records on file with the city Ethics Board. 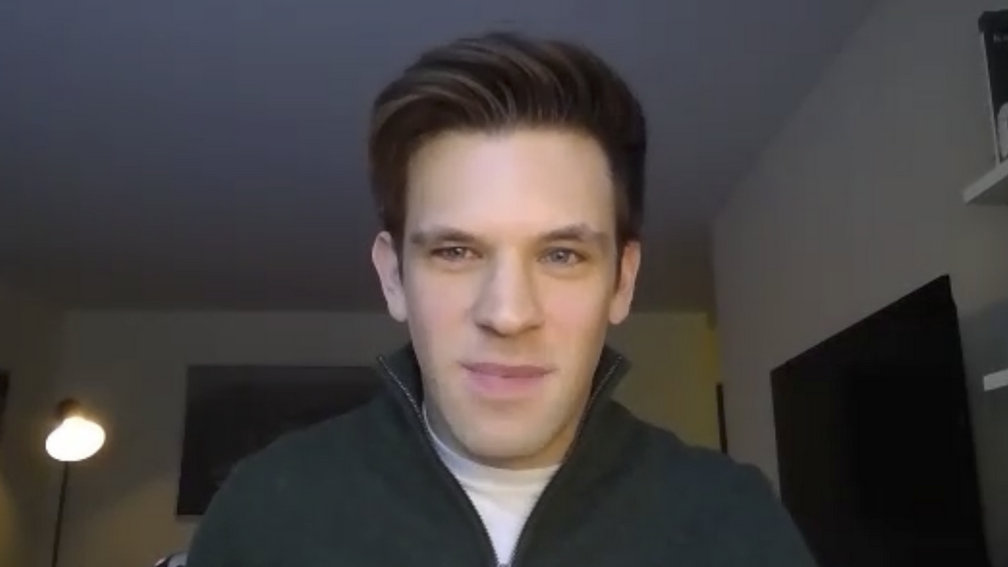 Jordan M. Stein, Rhino’s chief of public policy, who is not listed as a city lobbyist, hosted an online talk with Councilwoman Sharon Middleton. (Zoom)

Jordan M. Stein, Rhino’s head of public policy, not only testified in favor of the bill at a hearing last month, he arranged for the bill’s sponsor, Council Vice President Sharon Green Middleton, to appear as part of online roundtable talks about housing. 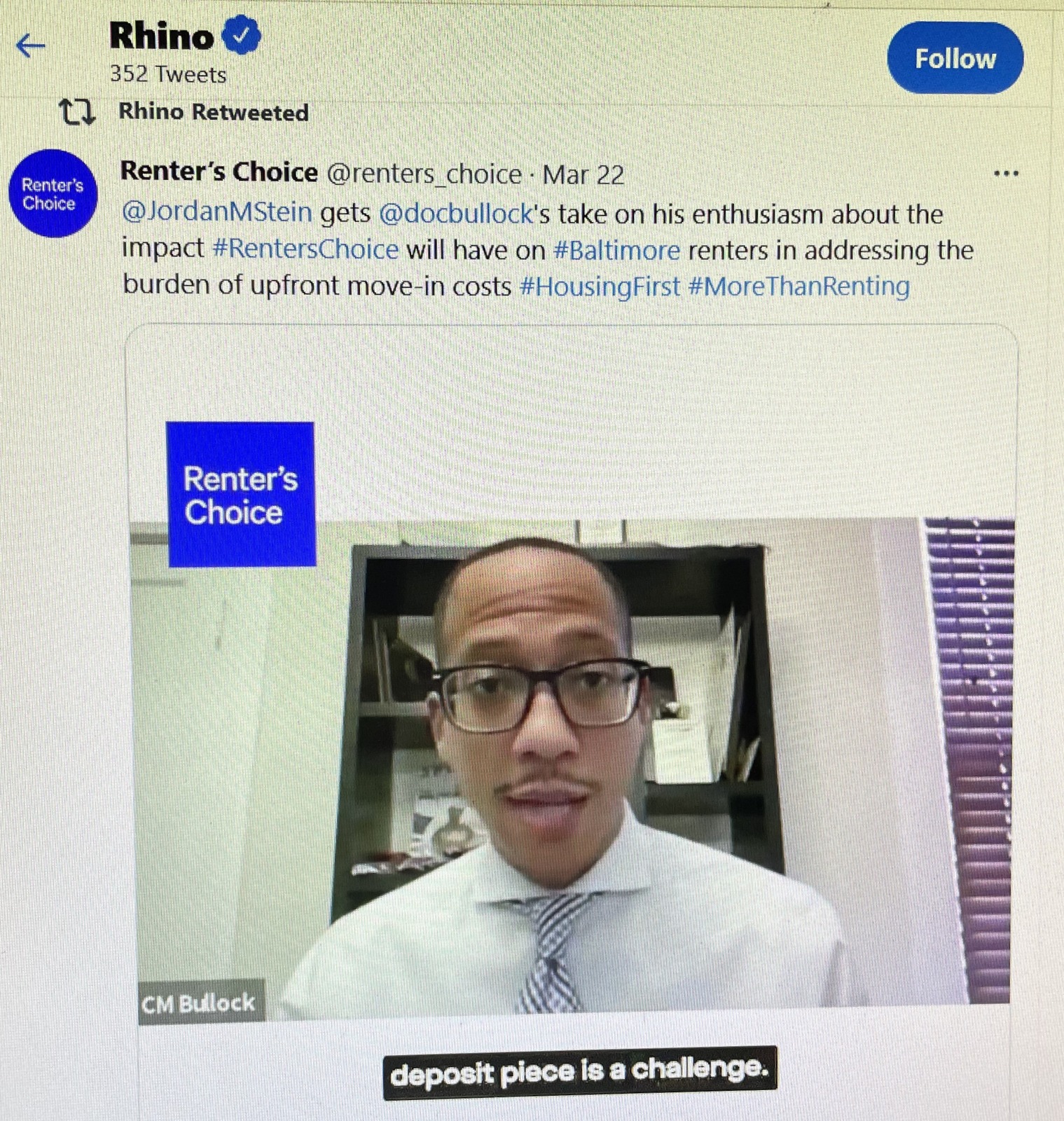 Acting as host of the March 19 event, Stein asked Bullock: “Why are you enthusiastic about the impact that’s just going to have on Baltimore City renters in addressing that burden that upfront moving costs pose?”

“Most folks in Baltimore are actually renters,” Bullock answered. “We know that, quite frankly, a lot of times that security deposit piece is a challenge.”

Stein tweeted those remarks by Bullock and others, in video clips that were then retweeted by Rhino. 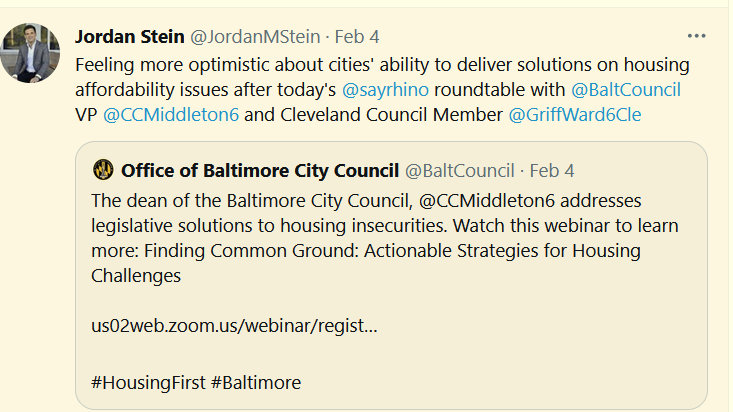 Indications that Rhino has been lobbying hard in Baltimore come amid tensions that rose to the surface recently over Council President Nick Mosby’s alleged fast tracking of the bill.

At the Council’s online luncheon last Monday, Dorsey charged that Middleton stifled his attempts to raise concerns about it at a recent hearing of the Economic and Community Development Committee she chairs.

Saying Middleton had cut him and others off “in an unbecoming and undemocratic way,” he told Mosby the bill should be delayed and sent back to committee.

After Middleton cut him and others off “in an unbecoming and undemocratic way,” Councilman Dorsey said the bill should be delayed.

Mosby, a co-sponsor of the bill, waved away Dorsey’s objections.

“I don’t believe it is the posture of the body to send it back,” he said, and chided Dorsey for criticizing a fellow council member.

Mosby likewise dismissed the concerns of another councilman, Zeke Cohen, who asked why parliamentary rules were to be suspended so that the bill would have a preliminary and final vote on the same night.

At the evening meeting, Middleton defended her handling of the legislation, but called off the planned double-reading, delaying final consideration. It’s expected to come before the Council for final passage on April 5.

Dorsey introduced one amendment delaying consideration of the bill and another stripping the rental security insurance language from it.

A majority of the Council – including Mosby, Middleton and Bullock – voted both of them down.

Middleton has not responded to several calls from The Brew seeking comment on her participation in the company-sponsored roundtable videos.

Bullock said he was approached by Stein about the bill and asked to participate in the online event, but said no one from the company paid him a stipend or contributed to his campaign account in return for doing so.

“He [Stein] reached out and said they had lined up a councilman from Greensboro, N.C., and said, ‘Hey, we’re doing these roundtables if you’d like to talk about housing affordability issues in your city,’ and I said, ‘Sure,’” Bullock said.

Bullock said he thinks the bill, which also enables renters to pay their security deposit in monthly installments, is beneficial to citizens.

As for the bill’s unintended consequences, “I had those [concerns] as well. We’re going to have to monitor it and we can always revisit this.”

Stein has not responded to calls from The Brew about why his name is not listed with the city as a lobbyist.

Ethics Board Executive Director Jeffrey Hochstetler confirmed that Stein’s name does not appear on the list of lobbyists and pointed to the requirements for registration.

[UPDATE: Stein registered to lobby in the city two days after this story was published, as The Intercept pointed out.]

Under the City Code, a person must register as a lobbyist if they communicate with a public servant in attempt to influence legislation if they: 1) expend $100 or more in gifts, 2) incur expenses of $500 or more or 3) earn $2,500 or more in compensation.

Founded in 2017, Rhino pioneered the new product in which tenants pay a nonrefundable monthly fee instead of a lump sum deposit. Rhino then insures the apartment, paying the landlord for any damages.

“I remain deeply concerned that these surety bonds could become predatory and we could see people increasingly going into debt”  – Councilman Zeke Cohen.

Maryland housing advocates have supported the other alternative to security deposits the bill would create – the opportunity to pay security deposits in installments over time, but are wary of the rental security insurance.

Some horror stories have surfaced, like the account a Brooklyn man who told Shelterforce he was subjected to thousands of dollars in improper charges. In the article, Stein declines to comment on the specifics of the case.

Cohen said he worries about the “unintended consequences that opening the door to ‘surety bonds’ could have for our vulnerable residents.”

“I appreciate the intent of this legislation and know that Vice President Middleton is serious about increasing access to affordable housing,” he said. “However I am concerned that one part of this otherwise good legislation could prove to be predatory.”

“No too long ago we were forced to sue a major bank after a wave of subprime lending left many Baltimoreans’ finances in shambles.”