There were bar graphs and charts as well as videos by young people who described how the Baltimore Children and Youth Fund (BCYF) has helped them learn marketable skills, gain confidence and establish organizations to bring these same benefits to others.

There was a slide disclosing that the BCYF awarded $9.2 million to 79 organizations that serves a projected 20,418 city youth, although other presented material listed 84 grantees and a total of 12,152 youth reached.

Otherwise, last night’s status report to the City Council’s Education, Workforce and Youth Committee was largely devoid of detailed financial and performance information, even though it was presented a full month behind the cutoff date set by the Council.

According to one critic, both the missed deadline and the failure of any member of the committee to even raise this point illustrate deeper problems with the fund, created in the wake of the Uprising following the 2015 death of Freddie Gray to improve the lives of city youth.

“No one on the Council seems particularly concerned that there has been a near total lack of transparency about the BCYF’s activities or expenses,” Melissa Schober, a city resident and health policy analyst who has followed the fund closely, said after the hearing.

“They all seem unconcerned about meeting their own deadlines in their own legislation,” she said.

“The criteria for continuation funding. . . What they’re currently spending on grants versus administration, including consultants and staff. . . An un-duplicated count of kids served, with some basic demographics like age, gender, race,” she began.

Why hasn’t the Youth Fund selected an executive director, she asked, or hired an auditor, as promised in the board’s minutes? When will it present a financial plan?

Also: how is the fund handling fiscal sponsors, most notably Strong City Baltimore, whose financial problems have hamstrung some youth programs?

For an entity that was approved by voters in 2016 and has so far received about $50 million of city property tax revenues, there should be more progress and identifiable results, Schober said.

“Instead, five years into the program, there is a lack of transparency and urgency typified by this hearing,” she observed.

Dayvon Love, part of BCYF’s Community Engagement and Communications team, began by saying, “I’m excited about the information that we are going to share and that, I think, the Council of Baltimore City should be proud of.” And he promised “more granular” information to come.

“We’re going to provide in the coming days and weeks additional information that gives a comprehensive look at a variety of important questions people will have about the Baltimore Children and Youth Fund,” Love said.

Some of those questions focus on the board created to make the fund an independent entity after originally being administered by Associated Black Charities.

Councilman Zeke Cohen asked what progress was being made toward the required one-third youth membership on the permanent board. Love said BCYF is discussing a “leadership pipeline” for training.

“One of the problems is that much of the youth-led landscape has made the mistake of not training youth to fully participate in the leadership positions that we want them to be able to participate in,” Love explained. “We don’t want them to be tokens. We’re talking about giving young people real fiduciary responsibility.”

“We are committed to working together to transition the BCYF into a thriving organization that continues to grow and improve and support organizations that are vital to meeting the needs of Baltimore’s children and youth,” she said.

One subject addressed in the presentation was progress toward what transition manager Kera Ritter called “a radical shift in grantmaking” to not only provide financial aid to Black-led grassroots groups, but to help them grow and become sustainable.

There was no demographic breakdown given on youth participants, but data on grantees showed that the majority of organization heads are Black and female. Love said 65% of the grantee organizations are led by people of color. 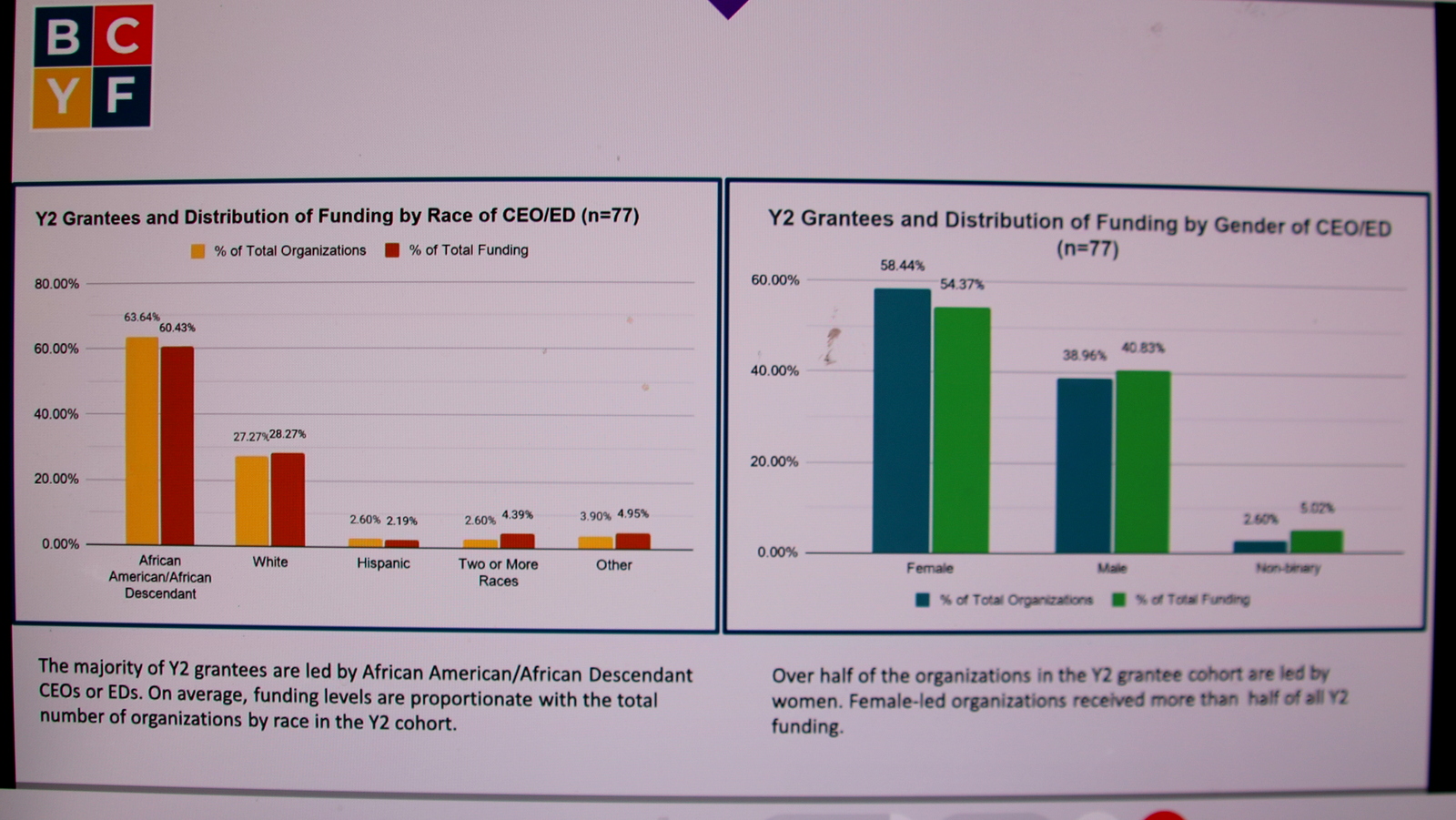 Breakdown of grantee leadership by race and gender. (Baltimore Children and Youth Fund)

Taped and live presentations by grantees offered an anecdotal glimpse of the program’s benefits.

“It’s been life changing,” said Cydnie Purdie, a 25-year-old educator for city schools who said she learned photography skills, how to build a business and go on a group trip to Ghana.

Purdie was a participant in a program sponsored by grantee Afrikan Youth Alchemy, a social justice and media production organization.

“I use the skills I’ve learned every day of my life,” said another participant, Korey Booker, who said he is focused on getting into film production work.

Dyon Davidson, founder of Beadly Speaking, which promotes girls’ wellness and confidence through jewelry making, spoke about all the assistance she received through BCYF.

“I would not have been able to do this myself,” she said, naming three separate staffers who helped her separate aspects of running her program.

When her turn came to ask questions, Council Vice President Sharon Middleton prompted the BCYF presenters to say why they thought their group was “under so much more scrutiny” than other grantmaking organizations.

“This is a team that’s majority Black folks,” said Love, who is also director of public policy for Leaders of a Beautiful Struggle (LBS). “This is an attempt to build an institution that is controlled by folks who are of and from the community.”

“And that’s a threat to a philanthropic sector that’s not used to us having that kind of power,” he added.