Many municipal governments in Maryland are beginning to welcome back the public 15 months after the start of the Covid-19 lockdown.

The State House in Annapolis, for example, has reopened, and courthouses across the state, including in Baltimore, have resumed full operations, including jury trials.

Government buildings in Harford County opened their doors back in April. Public buildings in Anne Arundel County will follow suit on July 19, and Howard County buildings are set to reopen on August 2.

City Hall remains closed to the public, with Board of Estimates, City Council, Liquor Board, Zoning Appeals and other public meetings conducted virtually. Water customers trying to pay their bills in person can’t do it.

The public is barred from the Department of Public Works downtown headquarters at the Abel Wolman Building. It’s the same story at the Charles L. Benton Jr. Building and other facilities that house city offices.

Residents seeking to pay bills or ask about billing errors or permit requirements or gain access to other city services are advised to use the phone or look at online alternatives. (Baltimore County, which also has not reopened government buildings to the public, allows residents to make in-person appointments.)

Asked when to expect restoration of in-person services, city officials are vague. 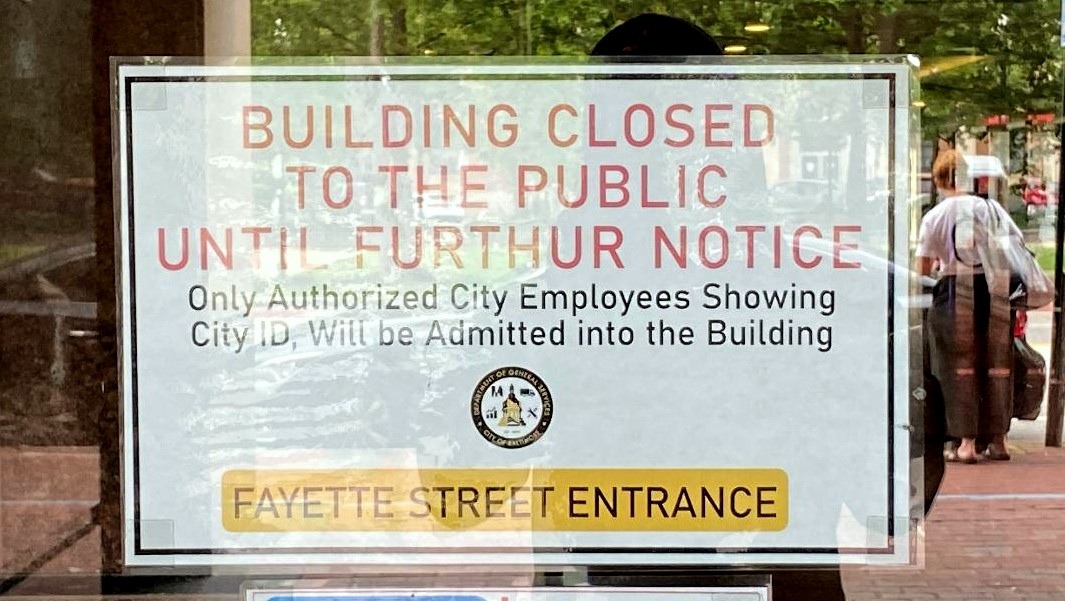 Last week his staff declined to provide any specific dates, or even a general timetable, for restoring services suspended or limited since the outbreak of the Covid pandemic in March 2020.

In fact, it’s increasingly unclear whether the city plans to bring back all of the employees who have previously provided in-person services.

It’s unclear whether the Scott administration plans to bring back all of the employees who have previously provided in-person services.

Restoring “resident-facing services,” he said, does not mean “returning to the status quo scenario where all staff report on site 100% of the time.”

Instead, “as Mayor Scott and I reimagine how government can operate best for the city’s residents and workforce, we see this as an opportunity” to consider greater use of teleworking.

Shorter said he has given an internal work group (composed of representatives from human resources, general services, information technology and the mayor’s office) the task of developing a plan for restored services.

“While that team of leaders works together to develop recommendations, we do need to thoughtfully and safely restore those resident-facing services that were suspended or limited during the pandemic,” he added.

Since the start of the pandemic, government meetings have been conducted virtually via Webex, and some are broadcast live via CharmTV, the city’s cable service.

The virtual meetings have gotten smoother, with participants getting better at using the “mute” button, sometimes learning the hard way through “hot mike” moments.

But the format has noticeably hampered public participation, with citizens unable to show up in-person in the same room as public officials to convey their opinions or ask to be heard.

And sometimes the process goes awry, as it did during the June 2 meeting of the Board of Estimates.

The password to allow the public access to the meeting was incorrect, and both citizens and the press were unable to watch the meeting where officials approve large contracts, award settlements and adopt policies.

Usually aired live on the city’s Charm TV cable station, the meeting was preempted by a City Council budget hearing.

After the mistake prompted an outcry on social media, the board repeated its votes from the morning session, this time televised live in the usual way. 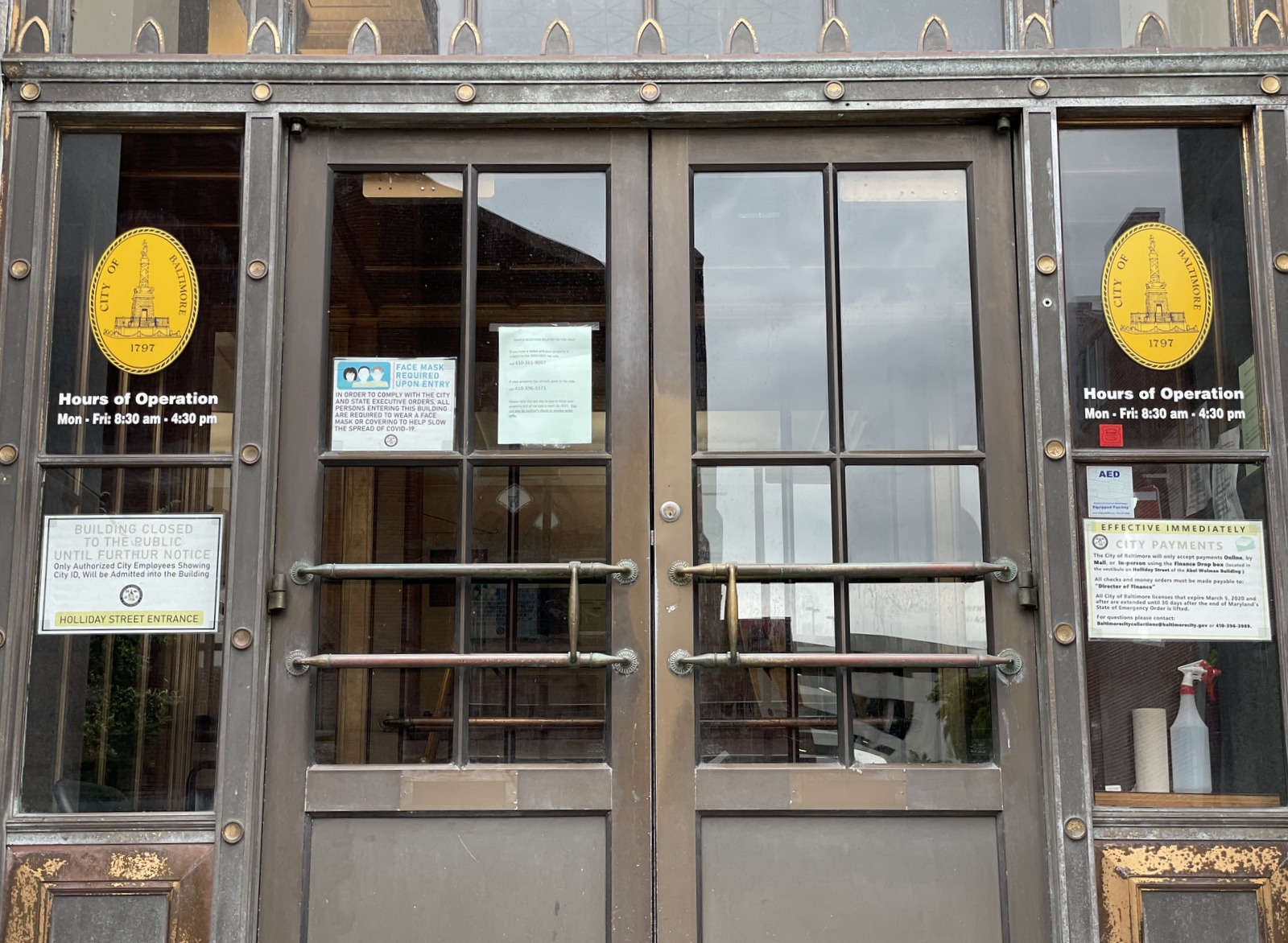 While offering no schedule for reopening municipal buildings, city officials point to their efforts to ensure a safe work environment and prioritize the health of employees.

A “Continuity of Government Operations Vaccination Program,” for example, was launched in March.

Employees were given a survey to express interest in receiving the vaccine. Those who completed the survey had the opportunity to register for a vaccination appointment through the Health Department.

Officials said it is not known how many city employees have been fully vaccinated.

Deputy Director of Communication Stefanie Mavronis said city employees also could register for appointments at other vaccination sites, such as the Convention Center, by indicating the “continuity of government” classification that was part of the State’s Phase 1B vaccination prioritization.

Shorter’s memo said the goal is to return municipal services to previous levels, but noted that they will not be restored without the approval of the “Restoration of Services Oversight Committee.”

In the meantime, residents needing any service, including paying bills, are advised to look to online alternatives. 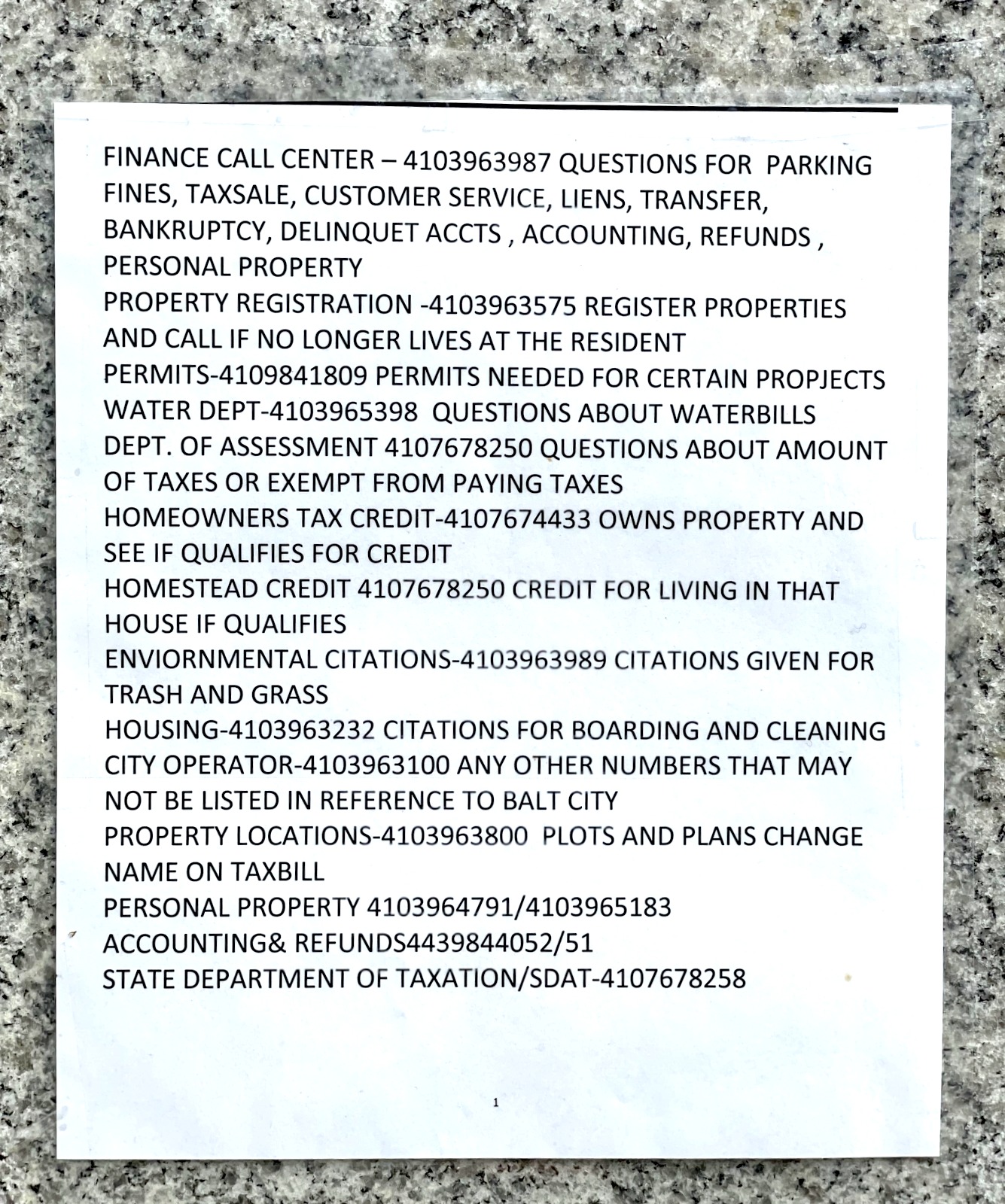 A sign on the Wolman Building directs visitors to this list of phone numbers to call to resolve city government issues. (Fern Shen)

EDITOR’S NOTE: Check with individual jurisdictions on reopenings since dates may be subject to change based on Covid numbers and other factors.