The $20,550 in contributions traced to William Christopher “Chris” McCollum – who The Brew learned today has resigned from his senior county post – came after Olszewski was reportedly warned in 2018 that McCollum had acted improperly while director of the Baltimore County Center for Maryland Agriculture and Farm Park, better known as the Ag Center.

Since her report was released, two of Olszewski’s Democratic allies on the County Council, Cathy A. Bevins and Julian L. Jones Jr., have ripped into Madigan for allegedly “scaring” employees and “giving Baltimore County a black eye.”

The situation has become so fraught that the County Council is planning to change the law establishing the inspector general’s office, a key element of Olszewski’s “Better Baltimore County” reform platform of 2018.

The yet-unannounced plan is to set up a committee of council members and representatives from the administration to review and potentially control the scope of future IG investigations.

McCollum’s political clout was long assumed to come from his relationship with former Baltimore County Executive Jim Smith, who appointed him to run the Ag Center in 2010, and Councilwoman Bevins, whose political campaigns McCollum has run while simultaneously working for the county.

• See our special investigation report on Smith and McCollum here and here.

But The Brew’s examination of campaign donations point to McCollum actively courting Olszewski after his upset win over Jim Brochin and Vicki Almond in the June 2018 Democratic Party primary.

In the weeks before the November general election, McCollum funneled $5,050 to Olszewski through the names “Chris McCollum” and “William McCollum,” according to filings with the State Board of Elections.

Many of his donations were linked to the address of the Ag Center on Shawan Road in Hunt Valley.

At the same time, he transferred $6,000 to Olszewski’s campaign from Friends of Cathy Bevins, using the street address of a county employee living in Essex.

McCollum has not return emails and phone calls seeking comment. Sean Naron, a spokesman for Olszewski, confirmed today that McCollum will leave his $135,000 position as deputy director of the county Department of Economic and Workforce Development, effective July 2.

Asked why he is resigning, Naron said, “We don’t comment on personnel matters.” 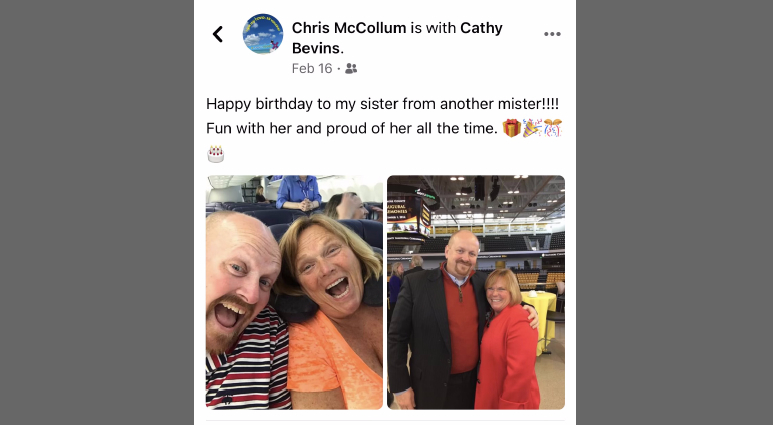 A Facebook entry by Chris McCollum celebrating the birthday of Councilwoman Cathy Bevins, whom he has served as both campaign treasurer and manager. (Facebook)

During the 2018 campaign, a member of the Maryland Agricultural Resource Council said he warned Olszewski about McCollum at a breakfast reception.

“I told Johnny O point blank that Chris was a dishonest character. I said he’d be poison to his administration.” Two other sources confirmed knowledge of the conversation, one saying, “We figured Johnny would take care of it.”

McCollum openly spoke of attending campaign fundraisers, another source who met with him, said. Sometimes he laughed, “I’m not paying” the contributions listed in the campaign reports, suggesting he was a pass-through for contributions from others, a banned practice in Maryland.

“He was a bundler. His role developed over a period of time from a glad-hander to the guy who puts together the cash.”

“He was a bundler. His role developed over a period of time from a glad-hander to the guy who puts together the cash. And he loved doing it, he relished it.”

McCollum did not respond to questions about his role in campaign fundraising. And Olszewski, through his spokesman, did not answer whether he was aware of McCollum’s activities at the Ag Center prior to the inspector general’s report.

The four sources who spoke to The Brew asked not to be identified for fear of being subject to reprisal for speaking to the media.

Recent contributions to Johnny Olszewski under the name of “William McCollum.” (He also contributed as “Chris McCollum.”) Also listed is a $5,700 electronic transfer to Friends of Cathy Bevins. (Maryland Campaign Reporting Information System)

Moved Up, Not Out

After becoming county executive, Olszewski did move McCollum from the Ag Center – but as a promotion.

Soon he was promoted again to deputy director of the county Department of Economic and Workforce Development. 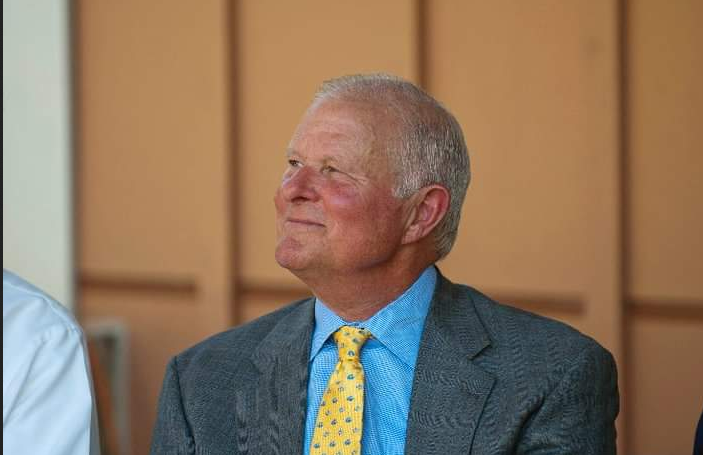 On the political front, McCollum remained active as a bundler for Olszewski, transferring $2,500 from Friends of Cathy Bevins to Olszewski in 2019, and another $3,500 last year.

A month before that transfer, McCollum was named acting director of Economic and Workforce Development. McCollum added to the pot by contributing $1,000 to Olszewski in his own name, campaign records show.

Meanwhile, gearing up for Olszewski’s widely expected entry into the 2020 Democratic primary for Maryland governor, the slate headed by his brother transferred $24,000 to the county executive late last year.

(The $24,000 transfer from the Future Slate to Friends of John Olszewski Jr. was the maximum allowed under 2014 General Assembly legislation, known as the “Jim Smith rule,” designed to curb huge donations made by slate funds to favored candidates.

(Smith – and treasurer McCollum – got around that rule in 2018 by loaning, not transferring, $100,000 in Victory Slate funds to Catherine Pugh in her successful bid to become Baltimore City’s mayor.)

Altogether, McCollum appears to be responsible for at least $20,550 in campaign contributions to Johnny O since mid-2018.

Last month, Olszewski announced he would seek a second term as county executive, abandoning a try for Maryland’s highest office.

“When I ran for county executive, we set a bold vision for a Better Baltimore County,” he proclaimed on Twitter, adding:

“In just a few years, we’ve proven together that transformative change is possible. But there is still more to be done.”