Water still gushes from the broken pipe. And the railway planks that lie above the public sidewalk are just as loose today as they were on August 25 when, 69-year-old Curtis S. Brown says, a piece of wood dropped on his head, knocking him semi-conscious.

Asked about the hazardous conditions at a CSX bridge next to Coppin State University, the Brandon Scott administration says it is taking steps to protect the public.

“The mayor’s office [has] been in contact with the railroad about the conditions of the bridge,” spokeswoman Stefanie Mavronis told The Brew, with CSX promising to dispatch an inspector to the site.

The railroad did just that today.

The inspector performed the same routine that was observed on Friday when a city Department of Transportation crew arrived under the bridge:

He took some photos and left.

Mavronis said “the administration looks forward to working with CSX to find a solution” to the water leaking down North Avenue – a solution that would appear as easy as diverting the water to a nearby storm drain with a flexible pipe. (This happens when a municipal sewer or water line breaks.)

But a major hurdle, city officials say, is that the pipe is on private property, and the city must first determine the pipe’s ownership and then give the owner time to fix the problem.

After a CSX retaining wall collapsed in 2014, pulling down part of 26th Street, the Rawlings-Blake administration vowed to conduct safety examinations of all rail bridges, overpasses and retaining walls.

In 2018, when another portion of the same CSX wall buckled, the Pugh administration acknowledged that safety standards and an inspection system had never been started.

Councilman James Torrence says he first heard complaints about the bridge last April from Mt. Hebron Baptist Church, which is located immediately west of the structure.

He said he was concerned about pedestrian safety and the impact of constantly running water on North Avenue’s streetscape beautification project.

Six months later, he has not received any definitive information except that, following last week’s Brew article, “everybody is desperate to find the source of the leaking water.”

On Friday, DOT announced that it “will be reaching out to AT&T” to “address the water leaking from their fiber optic cable under the bridge.” When The Brew called the emergency contact number listed on the pipe last week, the voice that answered lamented:

“I’m retired, and I never worked for AT&T. I’ve been getting these calls for over a year.” 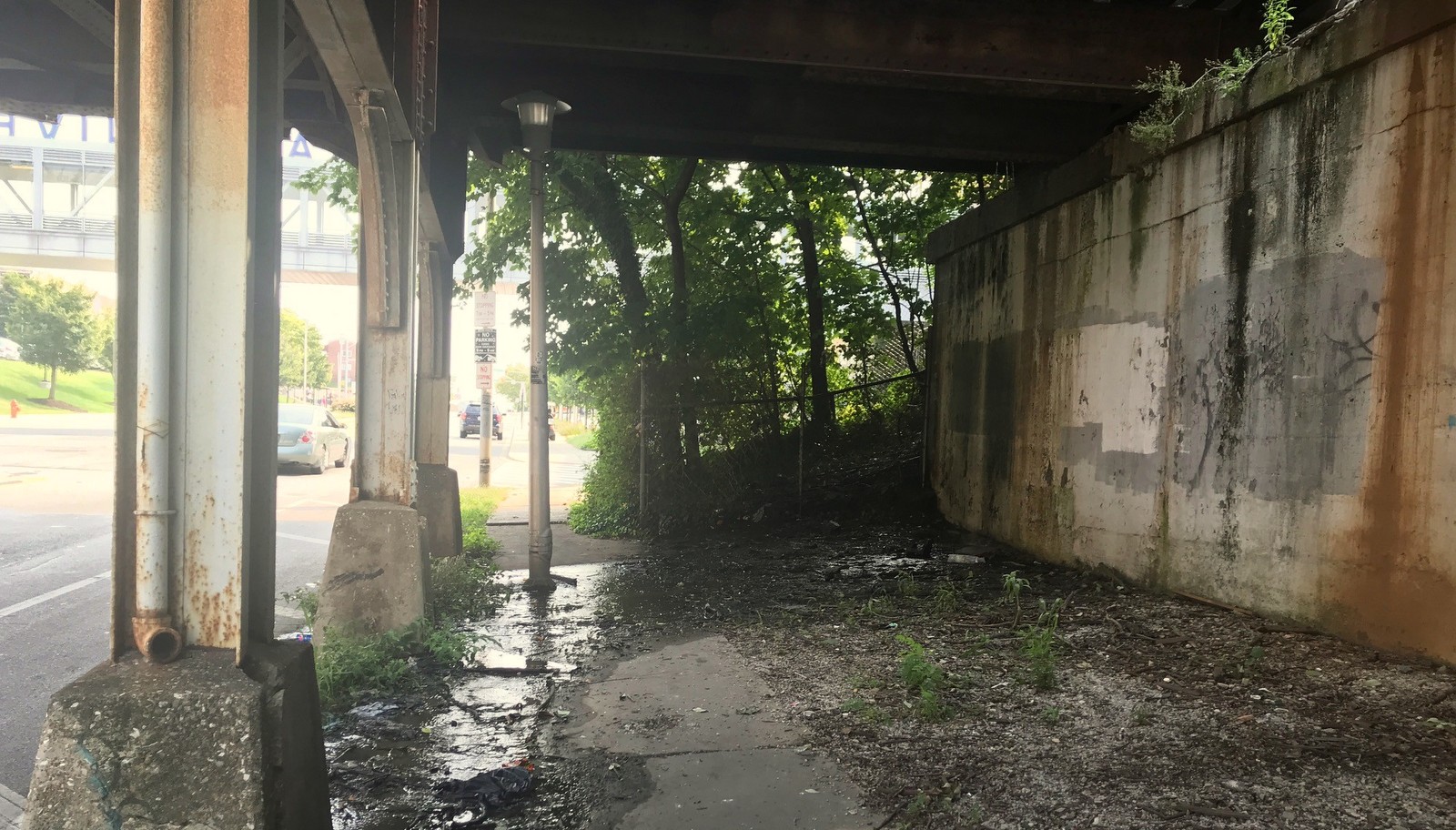 Water drains from the overhead pipe, then snakes down the sidewalk under the CSX bridge, an eyesore amid the new development on North Avenue. (Mark Reutter) 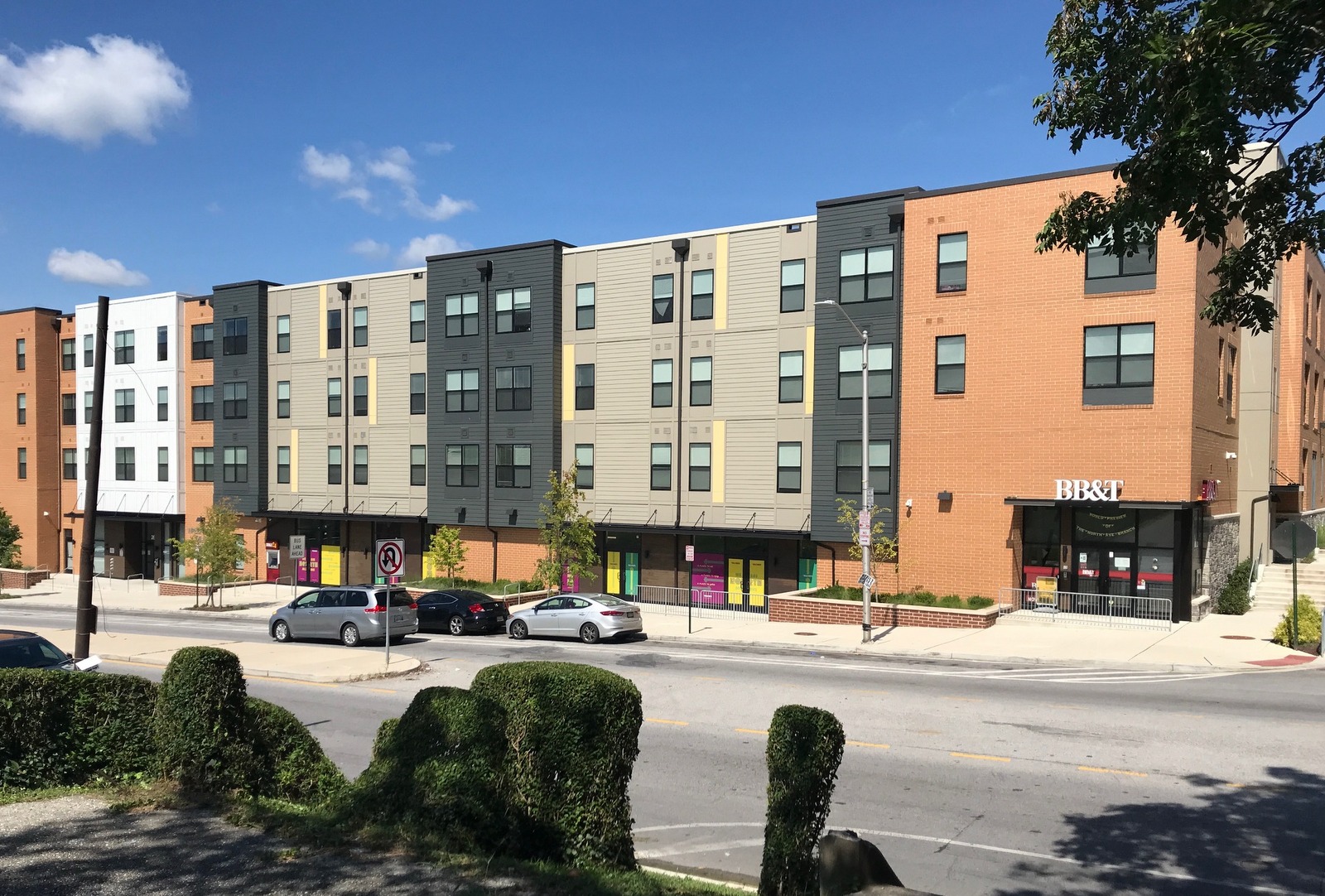 The Walbrook Mill complex is located across from the CSX bridge, a hard-won effort to provide affordable housing to this stretch of West Baltimore. (Mark Reutter)

Equanna Fisher, who lives at the Walbrook Mill Apartments next to the bridge, said the water has been running out of the pipe for at least 18 months.

From her wheelchair perch, she said that she watches people in Baltimore City vehicles stop under the bridge, look at the water pouring down, then drive away. 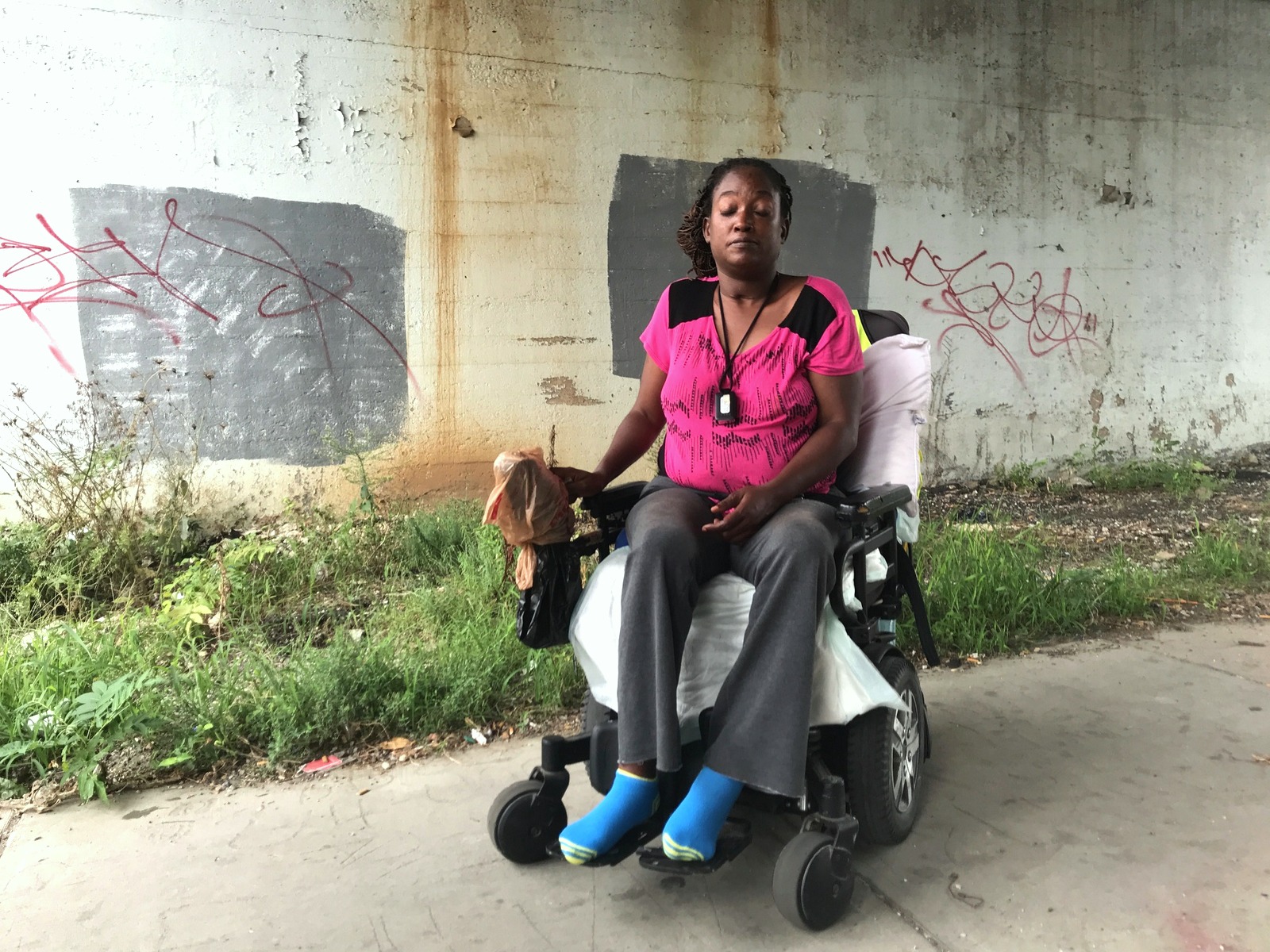 Equanna Fisher stays safe on the north side of the bridge that has a protective overhead awning for pedestrians – and no broken pipes. (Mark Reutter)

Because it runs continuously and is under pressure, city officials speculate it is chlorinated “city” water that somehow got diverted into the fiber optics cable.

Repeated queries to DPW about the water’s origin have not been answered.

CSX also has not returned emails, texts, photographs and phone calls from The Brew.

Nor has it made any public statements about safety improvements to the roughly 100-year-old structure that once housed a small passenger station.

BELOW:  The sights and sounds of the leaking bridge: