The damaged historic building at 4 East Eager Street can’t be salvaged and will be coming down in toto, the executive director of CHAP, Baltimore’s preservation board, has decided.

Concurring with a report by the owner’s structural engineer, Eric Holcomb said the facade of the elegant 1860s townhouse has become “too dangerous to save” following its destabilization during construction of an adjacent building.

“I will be working with the housing department and the applicant on approving its deconstruction,” Holcomb told The Brew tonight.

Both buildings, the eight-story tower rising at Charles and Eager streets and the soon-to-be-vanquished townhouse next to it, are controlled by Landmark Partners under different LLCs.

On or about March 24, 2021, during excavation work for the new building, the  townhouse became de-stabilized “as the result of inadequate sheeting and shoring,” according to a report presented to CHAP by Landmark Partners’ structural engineer last week.

While the tenants living at 4 East Eager were immediately evacuated, the building did not undergo any of the emergency repairs recommended by engineers Skarda and Associates.

Nor did Landmark Partners, headed by Jonathan Pannoni and George Watson, notify CHAP or the city housing department that the building was shifting and settling – with plaster falling inside the building and cracks appearing across the front and west walls – until September 2.

One day later, Pannoni applied to CHAP for permission to immediately demolish the building in the Mt. Vernon Historic District. 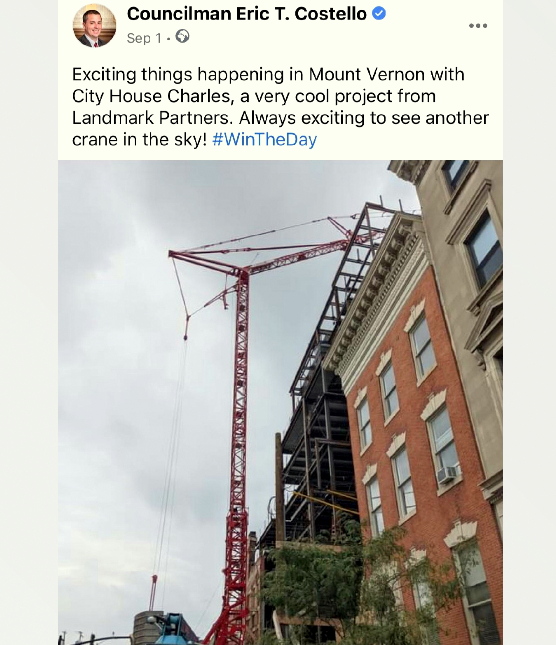 With 4 East Eager Street featured prominently, Councilman Eric Costello tweets his excitement “to see another crane in the sky” in Mount Vernon. (Technically Costello’s district ends a half block west of 4 East Eager, which is in the 12th District represented by Robert Stokes.) Two days later, Landmark Partners submits a request to CHAP for the “immediate demolition” of the building. 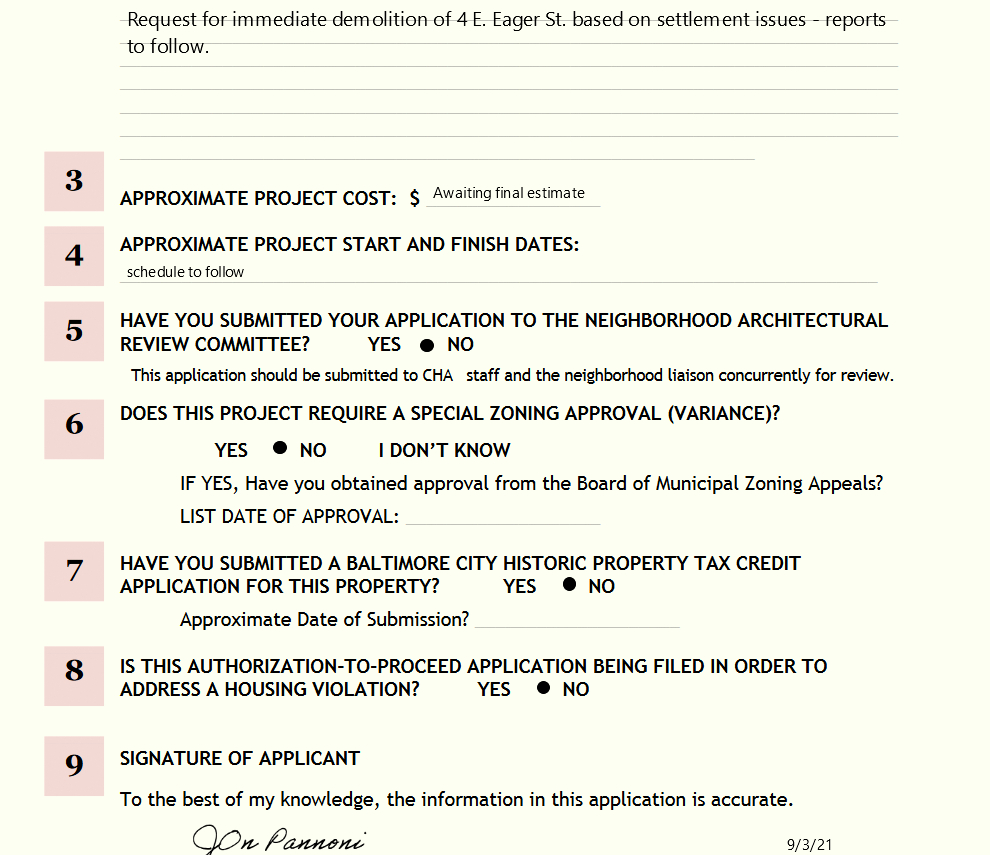 Last week, Assistant Housing Commissioner Eric Uttenreither told CHAP that the damaged building was one of the worst properties he has ever been in, and said civil penalties are likely to be assessed for violations of the housing code.

Expressing frustration and flashes of anger, CHAP commissioners ordered Landmark Partners to study the feasibility of saving the front facade and asked Uttenreither to prepare a report of possible building code violations.

While the violations report has not been completed by Uttenreither, Landmark Partners submitted the feasibility study on Friday.

It was prefaced with a letter from their attorney, David B. Applefeld, instructing CHAP that “required deconstruction with conditions is delaying the demolition and creating potential exposure, given the current documented life safety issues.”

The report, again by Skarda and Associates, said that the building’s fragility poses a serious risk to construction workers and stabilization would be highly difficult with only four feet separating the damaged townhouse and the new eight-story building.

“Significant cracks in the front wall at the southwest corner of the building have worsened during the past six months, and the south wall (front facade) is in danger of collapsing,” the report said.

And even if the front facade could be braced and stabilized, it “would always appear tilted,” P.E. Stephen M. Brown concluded.

At its meeting last Tuesday, CHAP called on Landmark Partners to 3D-scan the building as soon as possible.

Landmark presented a quote of $6,750 for scanning the interior and exterior and creating a computer model of all walls, floors, ceilings, rooms, columns, doors and windows.

Holcomb said CHAP “is not there yet” on determining whether 3D graphics will be required or whether Landmark Partners will be asked to rebuild the structure incorporating the original historic materials. 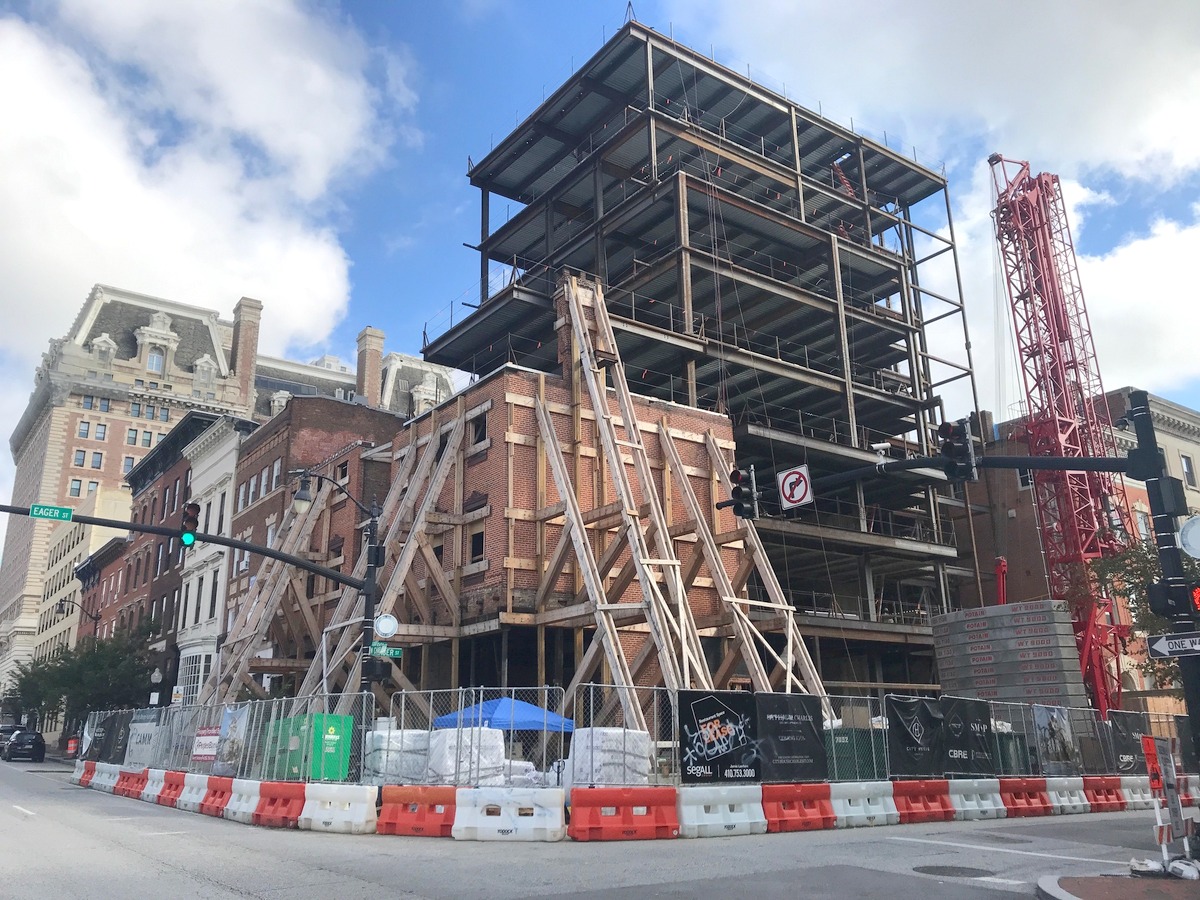 Landmark Partners’ office building rises behind the former Grand Central nightclub, whose facade has been stabilized by a network of wood braces. The 4 East Eager building is obscured by the red crane. (Mark Reutter)