In a finding that will surprise few in this city, a good government group’s study of political donations made for the 2020 mayor’s race showed that less than 20% of the $9 million flowing to competitive candidates came from city residents.

The major source of the financial bounty:

Companies, political action committees and individuals who live outside of Baltimore and, in quite a few cases, outside of Maryland.

Among local donors, moreover, only a fraction were small contributors, the new report by the Maryland PIRG Foundation found.

The rest came in much larger amounts – as much as the maximum $6,000 allowable in an election cycle.

According to the authors, the average contribution made to a mayoral campaign was $844, or “well over city residents’ weekly per capita income of $601.”

The upshot of their report: Big money from corporate interests and out-of-towners has an outsized influence on Baltimore city politics.

“Voters should be in the driver’s seat of our elections, not wealthy and corporate donors,” said co-author Rishi Shah, Maryland PIRG Foundation democracy advocate. 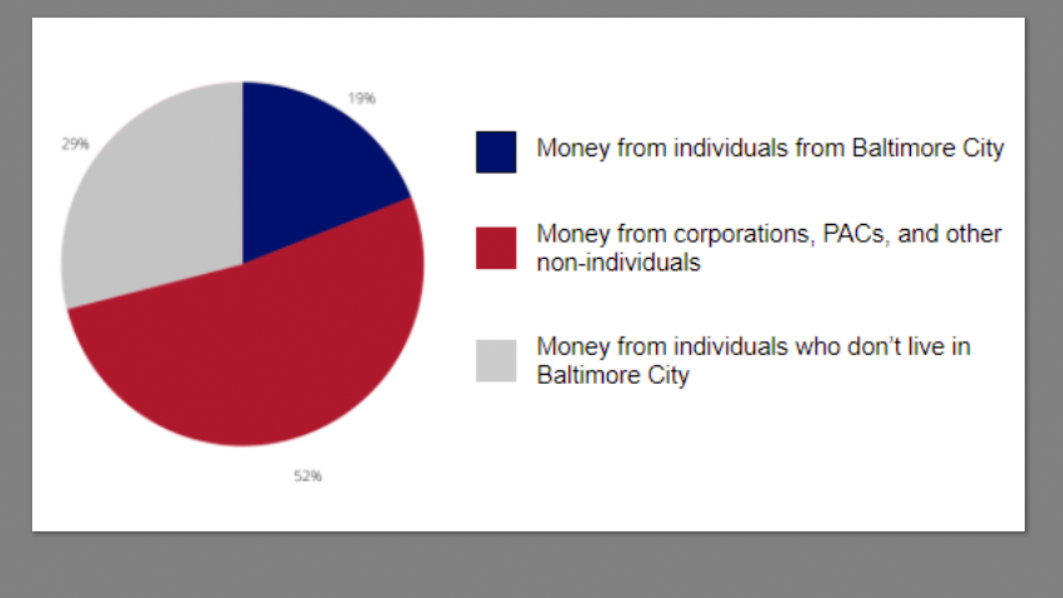 ABOVE: Only 19% of the $9.2 million in campaign contributions to major candidates in the mayor’s race came from individuals living in Baltimore. The rest was from corporations, PACs and individuals living outside the city. BELOW: Only 4% of the money raised came from donations of less than $150. (MD PIRG) 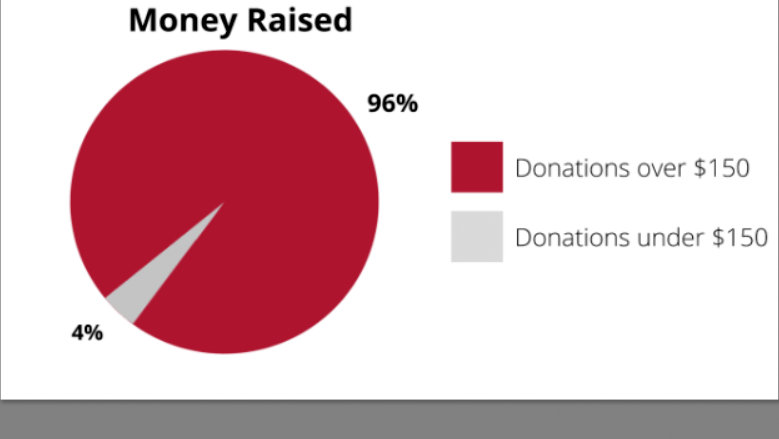 Why did the Maryland PIRG Foundation publish “Big Money in Baltimore’s 2020 Election” a year after the 2020 election?

The organization is looking ahead to the 2024 elections.

By then, small donor public financing legislation, approved by city voters in 2018, will be in effect for the mayor, comptroller and Council elections.

The program allows candidates to opt-in to receive public matching funds for small contributions from individuals. In exchange, they cannot accept large contributions or money from corporations, unions or PACs.

Small donor public financing legislation, approved by voters in 2018, is intended to reduce the influence of money on politics.

According to Maryland PIRG, similar legislation approved in Montgomery County in 2014 was a success, leading to more public participation and more small donations.

Candidates who qualified for the public financing program raised 98% of their money in small contributions ($150 or less) and matching funds, compared to 3% for candidates who did not participate in the program.

And public funding, it turned out, was no barrier to success. Participants included candidates who ran competitive races in 2018, the first year such a program was program was in effect in a Maryland subdivision.

Montgomery County Executive Marc B. Elrich participated, as did all four County Council at-large winners, along with two district-level Council members who were reelected.

Mayoral candidates, for example, must raise either $40,000 or receive donations from 500 individuals or more to tap into the fund.

At the time, the sponsor of the city legislation, Councilman Kristerfer Burnett, said public financing will make elections not only fairer and more democratic but more racially equitable.

He pointed to a 2018 study that documented how Baltimore’s donor class is largely white and rich.

While 32% of Baltimore residents are white and 63% are Black, the donor pool in Baltimore is the opposite – 64% white and 32% Black, according to the study of Mayor and City Council races in 2015 and 2016 by the think tank Demos. Other races and ethnicities were almost entirely unrepresented.

While Baltimore is 63% Black, those who contributed to political campaigns was the mirror opposite – 64% white.

PIRG estimated that $10 million would be needed over the next four years to place enough reserves in the Fair Election Fund.

Now the group is calling on Mayor Scott and the Council to begin budgetary allocations for the fund and to establish a Fair Election Commission to oversee the process.

“We understand that, obviously, Covid has been a huge top-of-mind issue,” Shah said. “But we’re optimistic that we now can have some movement toward this relatively small investment that will do so much to support our democracy.”

A word on PIRG’s methodology: The authors analyzed 10,995 publicly available campaign contributions from January 1, 2019 and beyond to candidates who received more than 2,000 votes during the Democratic or Republican primary election.

In addition to Dixon, Miller, Scott and Young , Democratic mayoral candidates Carlmichael Stokey Cannady, T.J. Smith and Thiru Vignarajah were under study as well as Bob Wallace, who ran as an independent and received 20.2% of the general vote last November.