When tenants held a demonstration in front of city offices protesting the lack of heat at their East Baltimore apartment building, management promised to have it back on within a week, meaning on or about December 14.

But that deadline came and went – and today some residents at Queen Esther Apartments (formerly known as Lanvale Towers) still are without heat, according to tenant Michelle Jones.

“They’re just having to use those space heaters they were given,” Jones said, noting that while some have had their heat restored, they are afraid to use it.

“I was with this woman last night and said to her, ‘It’s cold in here!’” Jones recalled. “And she told me, ‘I can’t put on my heat because the mold is coming through the vent.’”

“You only have about 10 minutes of hot water,” Jones said. “After that, you’d better be ready to jump out because it’s going to turn real cold.”

Resident Maurice “Marty” Wilson said he hasn’t had hot water in his bathroom for two years and still doesn’t, despite multiple complaints.

“I have to boil water to take a bath. I’ve given up complaining about it,” Wilson said, adding that while his heat has been restored, others in the building are still without it.

The company that manages the building for the new owner, Queen Esther Apartments LLC, told The Brew earlier this month that it was going to “turn the property around” and improve conditions.

Asked why some apartments are still without heat, Radiant Property Management’s regional manager, Seth Rosenfeld, said heat had been restored in the building and asked which units were complaining.

“All the heat parts were delivered and installed last Tuesday,” he said. “I have confirmed with all tenants as well as with the city inspectors and HUD that all units have working heat.”

That statement is not accurate, according to Jones, who said she has been struggling to get tenants to sign a petition amid fears of eviction or other forms of reprisal.

“I have seen these conditions. I know they exist. I have seen the dry rot in people’s walls,” Jones said. “They will let an inspector in, but they won’t put their name on a piece of paper.”

Asked about tenants running out of hot water, Rosenfeld didn’t deny it occurs, but said it was not surprising.

“Obviously in a building there are higher usage periods, since the building all shares the same hot water source, similar to higher electric usage in individual homes,” he said.

He added that the company looked into the issue and is “replacing the hot water pump” despite the fact that it is functional.

Jones said she is up at 5:30 a.m. every day, long before most of the building is awake, and still has to “run the water for 40 minutes before the hot comes.”

Jones said she is trying to give the new onsite building manager the benefit of the doubt, but has been disappointed overall by Radiant Property Management.

“They came on [December] 15th, and they just showed up on my doorstep with excuses,” she said.

Persistent mold, plumbing and heating problems, malfunctioning fire alarms and non-working elevators – one of the two elevators is out of service today, tenants say – are worrisome.

To be living in a building that caught on fire in 2017 with so many space heaters “makes people here nervous,” Jones said.

To be living in a building that caught on fire in 2017 with so many space heaters “makes people nervous”  – Tenant Michelle Jones.

She and Wilson are frustrated with the Baltimore Department of Housing and Community Development (HCD) for failing to hold the company’s feet to the fire.

Housing inspectors, Jones said, “have been in and out, and they just keep offering [the company] more time. It’s like the city and the company are on the same team.”

HCD’s goal is to bring all units into compliance, spokeswoman Tammy Hawley said today. “We have been following our inspection and re-inspection protocols.”

At a December 14 inspection of the building, “we observed heat in over 95% of units,” she said. “Those units that had not been restored were provided space heaters until motor installations could take place.”

“We have been following our inspection and re-inspection protocols” – HCD spokeswoman.

Hawley acknowledged that hot water was “still a concern in several units.”

“Management provided documentation showing they have taken steps to remove the old domestic circulating water pump and install a new pump, addressing this issue,” she said.

Hawley said the property manager has assured inspectors the company is addressing “several other minor concerns.”

Otherwise, she said, HCD has “received no additional 311 Service Requests during the last seven days since our initial follow-up inspection.” 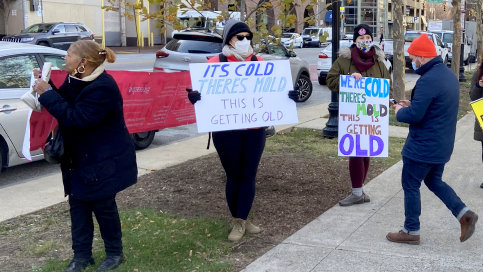 On December 7, Queen Esther Apartments tenants called on the city to get the landlord to make repairs and restore heat. (Timothy Dashiell)

Longtime tenants say a basic challenge to getting chronic problems fixed at the 50-year-old midrise has been frequent ownership changes.

In August, tenants were told their building had a new owner.

But when asked by The Brew earlier this month, Rosenfeld said the owner was still Lincoln Avenue Capital LLC. (This company is listed on the State Department of Assessments and Taxation’s online property database as the owner of record, The Brew confirmed.)

After publication, a publicist for Lincoln Avenue Capital said the company no longer owns the property.

She produced an August 25, 2021 deed showing that it was sold to Queen Esther LLC, of 691 Elizabeth Avenue, #2, Newark, N.J. (That’s the same address as Radiant Property Management.)

The deed shows that Lanvale Court LLC, a Lincoln Avenue entity, sold the property to Queen Esther for “$21.5 million cash in hand paid and other good and valuable consideration.”

That indicates that Lincoln Avenue cleared a sizeable sum on the property, which it acquired in 2018 for $14.3 million.

Lincoln Avenue Capital, founded by members of the mega-rich Bronfman family, secured a $14 million loan from National Equity Fund Inc. to acquire Lanvale Towers and the nearby Canal Court properties.

Since its establishment in 2016, Lincoln Avenue Capital has acquired 50 properties in ten states, accounting for more than 9,000 units that house 30,000 residents, Jeremy Bronfman told the Jewish Journal last year.

The family’s hope is to purchase more than 100 properties by the end of this year, Bronfman told the publication, touting the company’s philanthropic gestures.

Affordable housing has “become a pretty meaningful business both from a financial and an impact perspective,” said the now 35-year-old heir of the family fortune.

Earlier in 2021, Bronfman and his wife purchased a 8,000-square-foot, $30 million Spanish Colonial mansion in Santa Monica that features a bocce court, formal lawns, pool, spa and motor court for more than a dozen vehicles.