Tenants at a long-troubled East Baltimore apartment building, rallying outside of city offices downtown, are demanding help for living conditions they described as intolerable.

“We have roaches and rats littered across the building,” one woman said, addressing about 20 tenants of Queen Esther Apartments (formerly known as Lanvale Towers) and their supporters, who gathered outside of the Benton Building near City Hall.

Organizers said apartment units are chronically underheated and get terribly cold during the winter.

“I haven’t had heat for about a year and a half,” said Maurice “Marty” Wilson, who has lived for the last five years in the building, located at 1300 East Lanvale Street.

But the fundamental problem, he and other tenants said, is that no one from city government or Newark-based Radiant Property Management LLC has properly responded to the tenants’ repeated pleas for help.

“I’ve contacted Housing, no one has gotten back to me. Contacted the mayor’s office, nothing,” Wilson said. “I’ve called 311 probably eight times, and it took someone else emailing them to finally get them to answer.”

“They’re slumlords,” said Wilson, a member of the Lanvale Tenants Association. “They take our rent, but don’t do anything.”

“Time and time again we keep dealing with these issues,” said Michelle Jones, a longtime resident of the building. “These people are getting HUD money and are not making the necessary repairs.”

“We’ll turn it around”

A spokesman for Radiant, who said the company took over management of the 151-unit building in August, blamed its poor conditions and history of tenant complaints on the prior manager, Winn Company.

“We’re going to turn it around. This is what we do. But 90 days is a pretty short amount of time,” he said, pointing to plans underway for new lighting and security cameras.

UPDATE – Rosenfeld later contacted The Brew to say that Queen Esther Apartments LLC purchased the property in August and that the N.J. company is properly described as the current owner. Lincoln Avenue Capital provided a deed confirming the transaction. 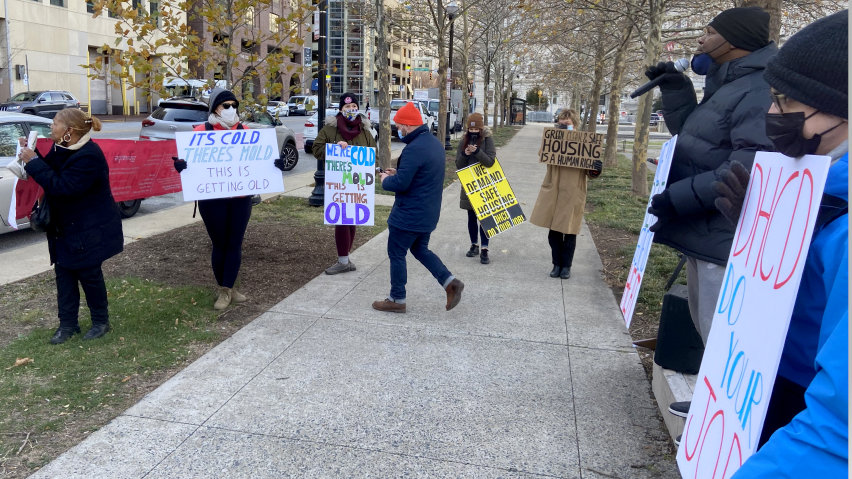 “It’s cold. There’s mold. This is getting old,” said the sign one protester held up in front of housing department offices near City Hall. (Timothy Dashiell)

No one from the Department of Housing and Community Development came down to respond to the protest, but spokeswoman Tammy Hawley offered a response to The Brew via email.

She noted that the building is owned by a private entity, and “the city of Baltimore does not have a contractual obligation” with its owners or managers.

HCD met with the property manager on December 3, 6 and 7 in response to 311 complaints of no heat and/or water reported by 21 units, according to Hawley.

She said 16 of the units have had their heat restored by management’s HVAC contractor, but five remain without heat. Those apartments have been issued space heaters.

“I know it’s not ideal just having a space heater,” Rosenfeld said, but “the heat should be fully functional in those units by the middle of next week.”

He blamed the problem on a delayed shipment of fan motor parts that are needed to repair the units.

“Things are going to happen”

Asked about residents’ demand that the company provide free lodging “in instances where heat, hot water, working plumbing and hazard-free living conditions cannot be provided,” Rosenfeld said the tenants’ only recourse is to wait for repairs.

“I understand their concern, but we are not required to put them up in hotels,” he said.

Asked about mold in the building, Rosenfeld told a story about how he had been in the building recently and the “black line” a resident told him was mold was “actually a place where a chair was scratching a wall.”

He denied allegations that management has sent threatening letters to tenants.

“I’ve never seen one,” Rosenfeld said. “We do send eviction letters when we have to evict.”

As for the plumbing leaks reported by residents, “we address them when they come up, but these things are going to happen in a 50-year-old, eight-story building.” 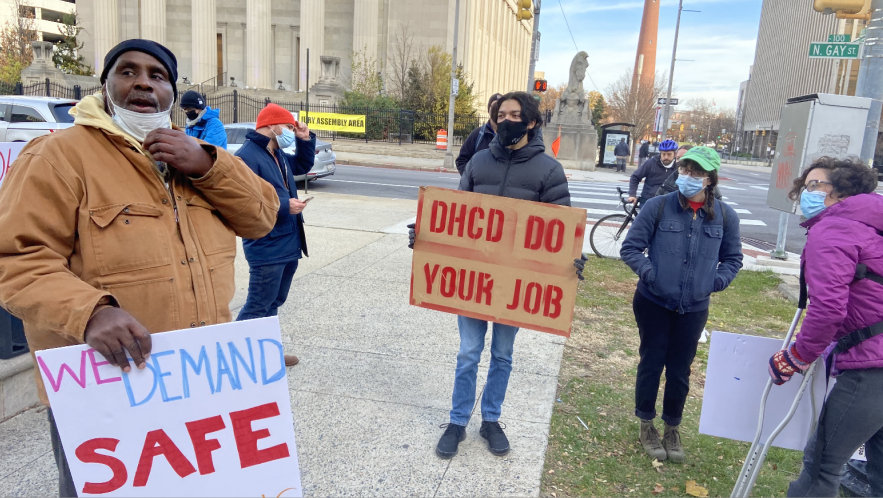 Call for an Audit

For tenants, the city’s and Radiant’s responses are a far cry from the steps they say are needed to address “a dire situation.” In addition to the restoration of heat and hot water and hotel accommodations, they seek:

• A full inspection done by a city or state inspector, not a third-party inspector paid for by the landlord.

• Development of a swift and transparent remediation plan for all identified issues with oversight by HCD and the Lanvale Tenants Association.

• Accommodations for tenants with disabilities, including relocating tenants with mobility issues to lower floors and improving maintenance on the elevators.

Rosenfeld said he and HCD are planning a meeting with tenants “this month or next,” and Hawley said that “all heat and hot water related repairs are expected to be completed by Tuesday, December 14.”

HCD has scheduled a re-inspection on that date to ensure code compliance, she added.