One week ago, City Schools officials stood with a group of top state lawmakers to declare that Baltimore schools are “some of the safest places for children” and to pointedly reject pleas from parents and the Baltimore Teachers Union that they postpone in-person learning for a few days following the winter break.

Today, nearly 40% of schools are starting the week in virtual mode due to widespread Covid-19 infections discovered since Thursday, when the District brought the school community back into buildings.

Yesterday afternoon, some parents had been getting messages from their children’s schools about the plan for Monday, but weren’t seeing anything official from Baltimore City Public Schools.

Finally, at about 7 p.m. last night, the news broke on the school system’s website: 57 schools were to transition the next day to temporary virtual learning.

That sent parents into a Sunday night scramble to arrange childcare and forced teachers to quickly pull together plans to teach their classes online.

By this morning, 61 of Baltimore’s 155 schools were listed as virtual. “Facilities challenges” accounted for two of those listed, but the rest were the result of Covid-19 infections and staffing shortages.

Officials said the schools closed because of a large number of positive tests would stay closed all week and reopen on January 19.

All this set off a wave of anxiety, uncertainty and anger among teachers, parents and students. Which schools were actually going virtual? Why didn’t City Schools better prepare after abundant warnings? Why did notice come so late? What was being done to ensure safety when buildings reopen in a week?

BTU president Diamonté Brown had predicted just this outcome in a letter to City Schools CEO Sonja Santelises sent on December 22, ahead of the holiday break.

“A school-by-school, wait-and-see approach creates crises in schools and confusion across the district,” Brown had said.

The union’s proposal, supported by community and parent groups and a number of city council members, would have had all learning virtual last week while officials tested for the virus, completed ventilation upgrades and made other preparations for a safe return following a holiday season where the omicron variant was sweeping the city.

“Upon a contingent return to in-person instruction on January 10th, City Schools should test every student and staff member with a rapid test and a PCR test,” Brown had advised. “Individuals who test positive should not be permitted to stay in school.”

Quoting Brown, @BTUbaltimore said “Had the district chosen to follow the BTU’s plan, we would already know more fully who is positive, be ready to return in person, wouldn’t have needlessly spread the virus and would have given parents time to plan.”

“To get robocalls last night at 8 pm saying your school is not going to be open (in person) just felt incredibly disrespectful to parents when a number of us – teachers and parents – said a couple weeks ago: let’s have a contingency,” said City Councilman Zeke Cohen.

On Twitter, the union chided the Annapolis lawmakers who stood with City Schools last week – including Senate President Bill Ferguson and Senator Cory McCray – urging them to think twice “BEFORE supporting a plan developed entirely by people removed from the on-ground reality.”

Meanwhile, the union continues its drive to get high filtration masks to staff and students, because the District is not providing them. 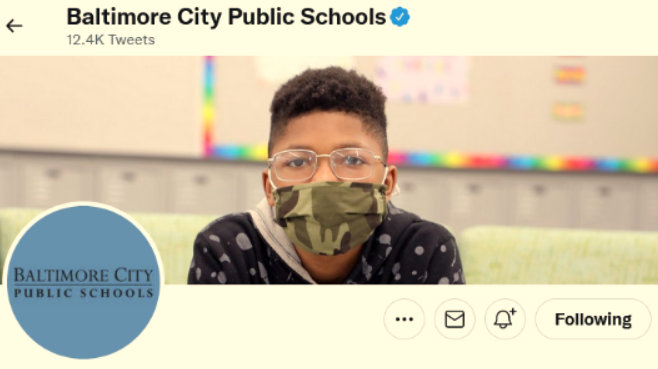 The lead photos on the Twitter page and homepage for Baltimore schools show a student with a cloth mask. (@BaltCitySchools)

Health experts now warn against common cloth masks and recommend masks that produce an electrostatic charge, like those made from N95, KN95 and KF94 materials.

As for what happens next amid the still-high rates of Covid-19 in the city, Santelises, school commissioners, union leaders, parents and the public will surely weigh on that when the School Board meets tomorrow.