As they have since the idea was first introduced, residents blasted the plan to allow large flashing digital billboards in downtown Baltimore, calling it “backward looking” and “an unforced error.”

As he did at a previous meeting, Planning Commissioner Tom Prevas drilled down on the Downtown Partnership of Baltimore (DPOB), seeking details of its revenue-sharing agreement with media companies that the quasi-public group once again refused to share.

“Is this an objection? Is that what this – an objection to the question being asked by the commissioner?” Prevas asked in one of several contentious exchanges during yesterday’s three-hour meeting.

The panel also heard from the Planning Department staff, which had been tasked with re-reviewing the sign plan amid criticism that had threatened to scuttle it.

Some proposed billboards were acceptable, but others are architecturally “incongruous,” planner Caitlin Audette told the commissioners, running through each of the 11 signs in detail.

Some would “cause visual clutter” and one would “overwhelm” a pedestrian plaza, Audette warned, recommending that four be reduced in size and one be eliminated entirely.

Hearing about the modifications, building owners complained that the changes came as a surprise and would cut into their expected profits.

“It feels a little unfair that we wouldn’t be able to generate any revenue,” said Amy Jordan, representing 36 South Charles Street.

Audette had said the sign that DPOB was proposing at that location was “incongruous with the existing design of the building and creates visual clutter” and should be eliminated.

A spokesman for the owners of 124 Market Place, where Audette said the building was disproportionately large, said her proposed changes would make the sign a non-standard shape “cutting the value to advertisers.”

When it came time to vote, City Councilman Eric Costello, one of the project’s biggest cheerleaders, crafted a way to give the losers a second chance.

Rather than approving Audette’s recommendations, the commission was asked to approve only the six locations she recommended with no changes. Advocates for the other five signs were told they could go back and make their case to the Planning Department and return at a separate meeting.

Voting “no” were two commission members: Prevas and Eric Stephenson.

Victor Clark Jr., who abstained, spoke enthusiastically about the plan, saying that – compared to the area around Horseshoe Casino – going through downtown was “like I was riding through a ghost town.”

Stephenson said he remained concerned about the potential for the signs to cause traffic hazards together with “a lack of evidence around the benefits of these signs.”

High Above the Crafty Crab

Controversial since it was proposed last August by Costello, the billboard plan was again promoted yesterday by DPOB President Shelonda Stokes as an economic game changer that would add “energy, vibrancy and walkability” to the struggling central business district.

In a fast-tracked process, the City Council approved an area around the Inner Harbor where restrictions would be relaxed to allow digital billboards as large as 1,800 square feet to be placed, hanging from the sides or wrapping around the corners of commercial buildings.

The “North Harbor Area of Special Sign Control” is bounded by Howard Street to the west, Baltimore Street to the north, President Street to the east, and Pratt and Conway streets to the south. 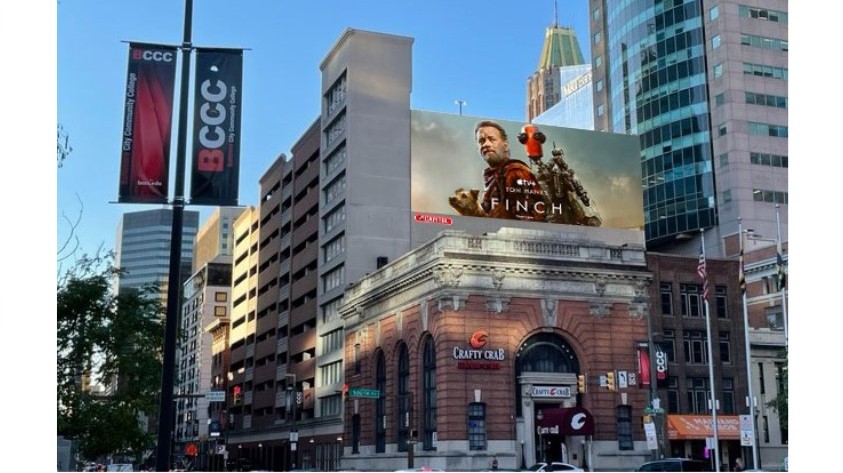 Digital billboard at 204 East Lombard Street, as seen from the southeast-facing corner of the intersection with Commerce Street. (godowntownbaltimore.com)

Among those approved yesterday was an 1,800-square-foot billboard at 204 East Lombard Street, which would be visible above the former Uncle Lee’s restaurant (now the Crafty Crab) at 44 South Street.

Audette assured the commission that the 30-foot-high and 60-foot-wide sign, positioned 75 feet above ground level, “would likely not be visible” from the closest intersection, at South and Lombard streets.

Another sign approved yesterday was 601 East Pratt Street, which will be 15 feet wide and 50 feet tall, was shown sharing space with the big red Phillips sign on the side of the Power Plant building.

Some of the biggest objections raised by the planing staff concerned the intersection of Charles and Lombard streets, where three signs were proposed, including one at 100 South Charles.

Nixed by the staff in an earlier iteration (see below), the sign was modified, but was still found to be unacceptable. 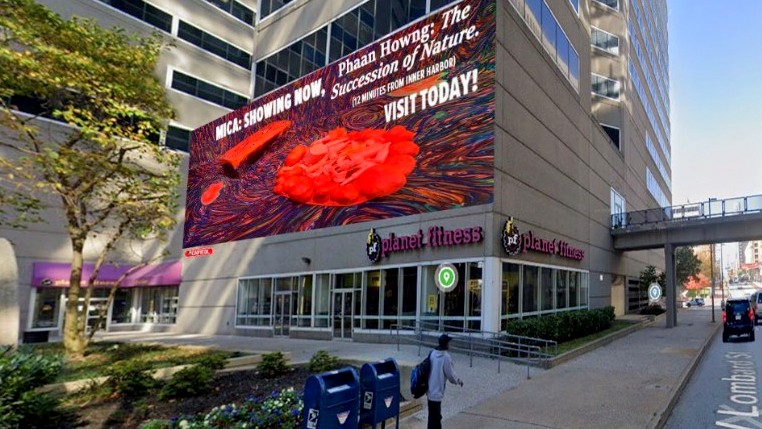 “It continues to dominate the existing plaza creating an uncomfortable space for pedestrians and those who use the plaza,” Audette said, recommending the billboard be shrunk down further and re-positioned.

Lobbyist Joe Woolman, representing the building’s owner, Carlyle Baltimore Holdings, called her judgments  “subjective” and told the commission, “I would ask that we be left as we are.”

Some of the testimony came as a surprise, including remarks by attorney Caroline Hecker, who said she had concerns similar to Prevas’ about DPOB  acting “as a gatekeeper.”

Prevas had sought to pin Stokes down on this very point.

Downtown Partnership has said it would collect a 5% fee from billboard sales, to be shared with city arts districts, but declined provide a copy of the service agreement to the Planning Commission.

“I do wonder what the appropriate role of DPOB should be in deciding this,” Hecker said, suggesting it would be better handled directly by the city.

A spokesman for one of those media companies also surfaced at the meeting – Jibran Shermohammed, vice president for development at Orange Barrel Media. The involvement of the Columbus, Ohio, company had been the subject of speculation as the plan has moved forward rapidly in the City Council.

After Shermohammed critiqued the proposed modifications for two signs, Prevas asked him how many billboards his company represented.

The building owners whose sign proposals were left untouched praised the plan as good for Baltimore.

“The billboards would “bring new tenants in and bring some energy to the city,” said Zed Smith, CEO of the Power Plant’s owner, The Cordish Companies.

Several artists said they supported the plan, calling it a potential economic lifeline for the local arts local community.

“Close your blinds!” one artist said, addressing the plan’s critics. “You’re taking money out of my pocket!”

“I can see clearly where that billboard will be and so can all the other residents in my building”  – Condo Owner Barbara Valeri.

Once critical of the signage plan, the City Center Residents’ Association, under new leadership, has taken a neutral position. But several downtown residents spoke who remained strongly opposed.

The idea that large, flashing billboards will revitalize downtown “is patently absurd,” declared Amy Bernstein, who said she was speaking on behalf of the Harbor Way and The Towers at Harbor Court condominium associations, which together represent roughly 400 downtown residential taxpayers.

“Subjecting us to ads from Ford Motors, Nike and Lyft will do absolutely nothing to brand Baltimore as a twenty-first century city,” Bernstein said. “Nothing to increase foot traffic, attract tourists, or new tenants. Nothing to enhance our architectural distinction.”

Barbara Valeri took aim at one of the plan modifications that supporters say shows sensitivity to those who live downtown.

The president of the Towers at Harbor Court Condominium Association said she had been assured that none of the billboards will be visible from residential areas.

“I can tell you that I just looked out my window and at the Sheraton,” she said. “And I can see clearly where that billboard will be, and so can all the other residents in my building.”