To hearty applause, City Councilman Eric Costello announced at the October meeting of the Downtown Partnership of Baltimore (DPOB) that his digital billboard bill had been signed into law by Mayor Brandon Scott.

Yesterday, the Planning Commission was set to vote on a Sign Plan governing where the large flashing signs would be located downtown, how they would look and function, etc.

But at the last minute the item was pulled, at Costello’s request, from the agenda and listed as postponed.

In an email, the 11th District councilman told constituents he did so in order to give the semi-public DPOB, which has been closely working with him on the billboard plan, extra time to make some sign location tweaks.

But in the days leading up to the meeting, The Brew has learned, DPOB was peppered with strong objections raised by a residents’ association and, notably, by members of the Planning Commission.

Along with getting letters from citizens predicting the billboards would be “a horrendous blight” and potential traffic hazard, the Partnership was being hammered by critics raising issues of transparency, legal standing, favoritism and more.

Specifically, some are sharply questioning the group’s refusal to release a profit-sharing agreement being signed with unnamed “media companies” that will install the billboards.

“There is confusion as to what marketing entities or interests are really behind this effort,” wrote William B. King, interim board president of the Center City Residents Association (CCRA).

“Rumors have swirled that there is a single marketing company (some suspect Orange Barrel Media) that has been driving this effort from behind the scenes,” King wrote in a letter sent to DPOB on Wednesday, the day before the Planning Commission meeting.

Rumors have swirled that an Ohio-based company, Orange Barrel Media, is driving the push for billboards downtown.

King complained that DPOB was telling his group the profit-sharing agreement had not been “inked” and, anyway, would not be made be made public.

King said his group also was “disheartened” that the Downtown Partnership would not commit to seating a CCRA member on its billboard advisory panel.

Even more biting were the points raised by the Planning Commission, which asked “on what authority” DPOB is able to “apply to entitle buildings it doesn’t own?” Who, they asked, “is the REAL applicant?”

Commissioners’ questions, shared by a person with knowledge of the matter, probe an even more fundamental issue that has long rankled community members: is the Downtown Partnership a public or a private entity?

“Does DP take position that it’s a city agency or a 501 (c)(6),” a commissioner asked the group, noting financial data indicating the majority of its funding comes from city contracts.

At an October meeting of the Planning Commission, the DPOB team presenting the billboard plan disclosed, perhaps inadvertently, the existence of the profit-sharing agreement.

When questioned further, the Partnership’s lawyer said that, as a private, nonprofit corporation, they didn’t have to show it.

But that assertion is now being questioned by members of the commission, according to the query sent to the Partnership. “This Commission has every right to see it,” the commissioners’ email said.

In addition, the commission is asking whether DPOB is “showing favoritism” for certain downtown members by selecting signs for particular buildings. 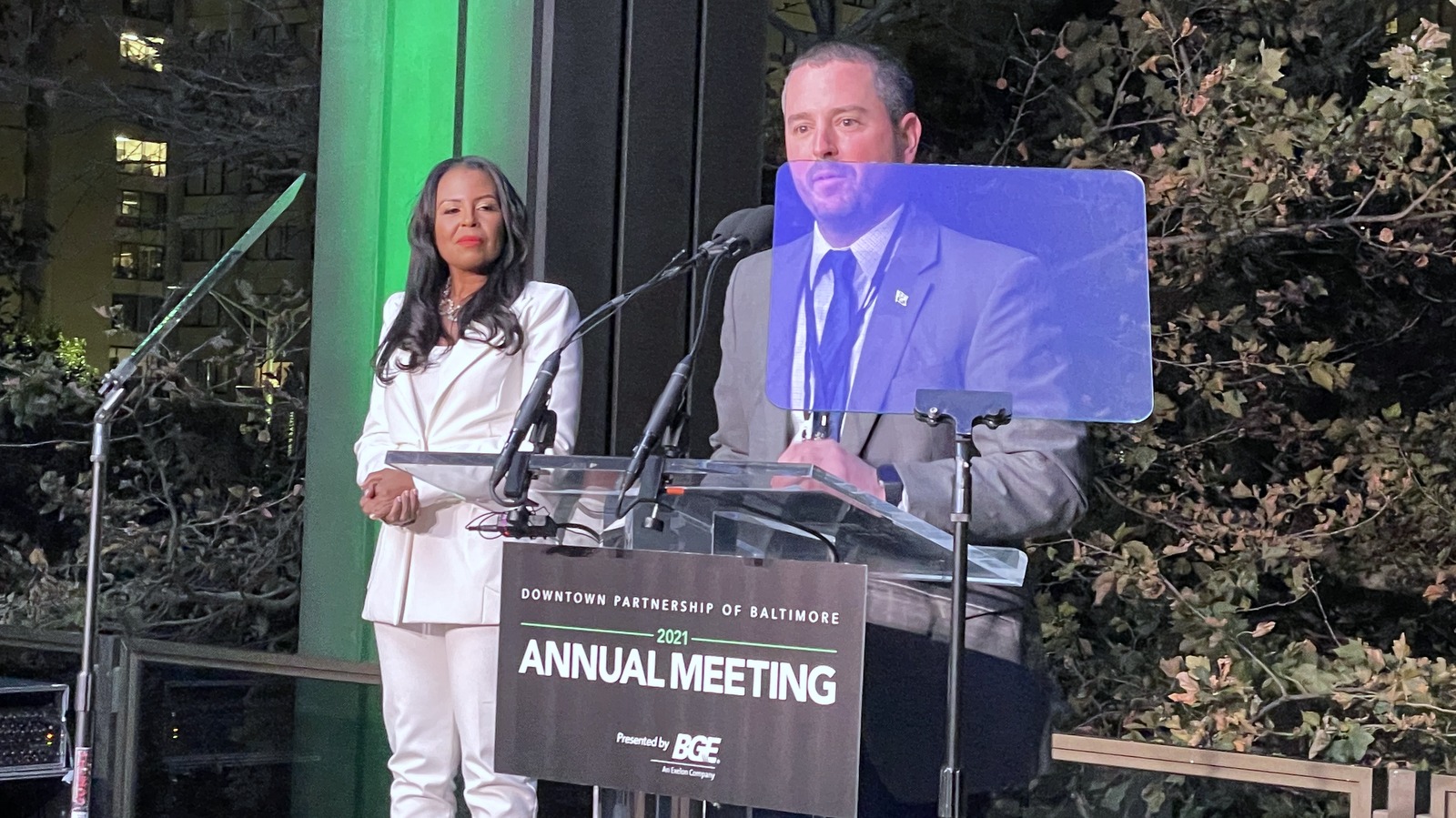 Introduced to the City Council last August, the billboard plan has been promoted by its boosters as an economic game changer that would add “energy, vibrancy and walkability” to the city’s struggling central business district.

It would create an area around the Inner Harbor where restrictions would be relaxed to allow digital billboards as large as 1,800 square feet to be placed, hanging from the sides or wrapping around the corners of commercial buildings.

The idea was panned by many downtown condominium and apartment dwellers, who said the signs could be an ugly nuisance and a possible cause of traffic collisions. And King, speaking for CCRA, said its members were not properly informed and asked that Bill 21-0118 be delayed.

Instead, the bill was enacted with unusual speed by the Council and within 24 hours signed into law by Mayor Scott.

Since then, the draft sign plan has been altered to the point where the CCRA now neither opposes nor supports it. The proposed number of digital billboards has been scaled down from approximately 20 to 12.

But indications are that the sign plan is still in flux. In his email to community members yesterday, Costello said the Partnership wants to restore two signs originally included and remove another.

Last week, replying on behalf of DPOB, Ballard Spahr attorney Jon Laria asserted that the group is not a city agency and said it should be referred to as “Downtown Partnership of Baltimore Inc.,” and that it is “a 501(c)(6)”  entity.

Accordingly, many of the questions raised by the commission “do not need explanation or exploration,” he said in an email obtained by The Brew.

Asked why DPOB is acting as a middleman, rather than letting individual property owners negotiate with billboard companies, he said “because someone needs to coordinate it.”

“It would be confusing to have multiple applications rather than a coordinated one,” he explained.

Laria called the Planning Commission’s question about “favoritism” disturbing, noting that “any additional buildings who wish to be included . . . may freely propose an amendment to the signage plan.”